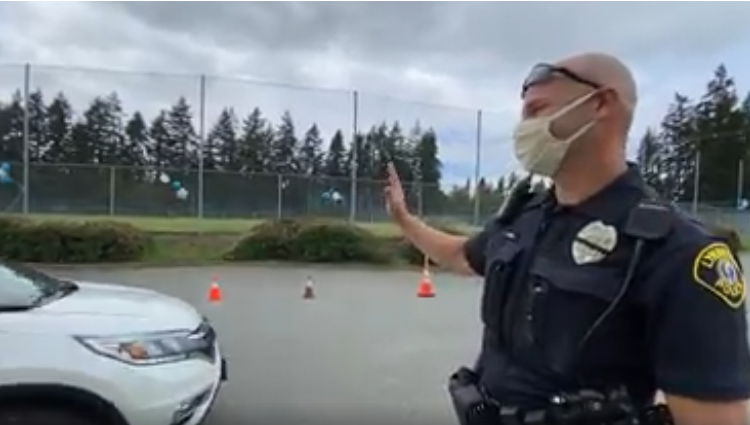 After three years of patrolling the halls of Meadowdale High School, Lynnwood police officer Jacob Hubby is saying goodbye to the campus. As a farewell, the police department put together a video to commemorate his time at the school.

Since 2017, Hubby has been Meadowdale’s school resource officer (SRO). When he first came to the school, Hubby said it was a good fit for where he was in his career. Now, he’s ready to move on and not too soon.

Hubby’s departure coincides with a recent decision by the Edmonds School Board to remove SROs from three district high schools, including Meadowdale.

In addition to providing on-campus security, Hubby said he was able to provide informal counseling and act as a link for students to the police department when they needed it. Through the relationship he developed at the school, Hubby said he hoped to humanize police officers and show students they can engage with law enforcement without concern.

“It was really surprising to me to see the amount of kids and students that started opening up slowly, but surely,” he said.

During his time at the school, Hubby worked with students experiencing a variety of issues ranging from speeding tickets to domestic abuse.

“Watching some of these kids make it through some of the circumstances that they’ve made it through has been really inspiring to me, personally,” he said. “I share that with my kids and I try to inspire them with some of the things Meadowdale students have been able to accomplish.”

Before transitioning to another job in the police department, Hubby had a final bit of advice for the students he’s leaving behind.

“You guys are smart and you’re all capable,” he said. “You all have bright futures and I would just encourage you to go out there, set goals and work hard to reach them.”

To watch the video honoring Hubby’s time at Meadowdale, click here. For students wanting to keep in touch, Hubby said he’s just a text away.