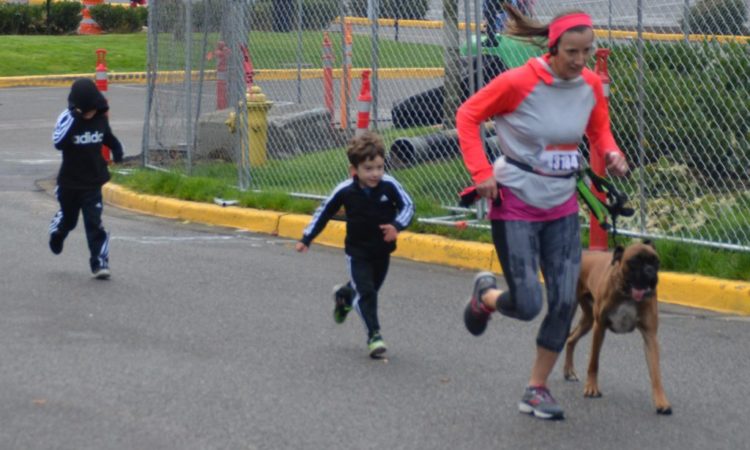 “It’s a way for us to celebrate our schools and our students,” said Deb Brandi, Foundation for Edmonds School District executive director and chief event organizer.

“I love to hear these schools and these students participating with their families,” Sessions said.

In keeping with the event’s Halloween theme, several participants of all ages wore costumes — including some of the pets that were in attendance. Though this is the 11th year of the event, it is the second year that the event has been Halloween themed.

Formerly known as the Street Strut, the 5K walk/run relocated from downtown Edmonds to Alderwood Mall AMC Theater plaza eight years ago. After gaining popularity with City of Edmonds schools, Brandi said the location was shifted to Alderwood Mall to be more inclusive and inviting for other district schools.

“We had the opportunity to partner with mall and we rebranded it to celebrate (all) schools,” she said.

For the seventh year running, Lynndale Elementary School was awarded the trophy for placing first with the most students participating, with 287 students registered. Sherwood and Brier elementary schools placed second and third respectively. Winning schools were awarded prizes, including Seattle Storm tickets, food provided by Here and There Food Truck, and a Lynnwood Bowl and Skate pizza party.

Alderwood Middle School placed first with the highest number of registered students at the middle school level, at 59 students. The school was awarded a $500 Whole Foods gift card.

Performing at the event were the drumlines from Edmonds-Woodway, Lynnwood, Mountlake Terrace and Meadowdale high schools, as well as a performance by the Edmonds-Woodway High School band. The cheer teams from the four high schools also attended the event to cheer on the runners/walkers.

–Story and photos by Cody Sexton