During its Jan. 17 business meeting, the Lynnwood City Council debated legislative priorities for 2023, heard from the police department about plans for a recent grant and listened to Mayor Christine Frizzell answer allegations about a lack of transparency. The council also met with candidates for city boards and commissions.

Frizzell denied accusations that she didn’t disclose prior communications with Acadia Healthcare and the Washington State Department of Health (DOH) about the opioid treatment center proposed for an office building near the Alderwood Boys and Girls Club. The treatment center has been the council’s main focus in recent weeks and concerned residents on Saturday protested in front of the facility, located at 2322 196th St. S.W.

During the Jan. 14 demonstration organized by Safe Lynnwood, Councilmember Patrick Decker read a statement on behalf of councilmember George Hurst, who was unable to attend. In his statement, Hurst stated that Mayor Frizzell and Assistant City Administrator Julie Moore had undisclosed meetings with Acadia on Dec. 29 and that “the state Department of Health, Acadia, the mayor and city staff have all failed you [protesters] and all people of Lynnwood.”.

“I’m appalled at the insinuations that targeted me and my integrity,” said Frizzell, who also defended Moore. The mayor told the council that she was never contacted directly by Acadia or the Department of Health (DOH) prior to hearing about the clinic from a local news outlet. “I met with Hurst twice between Dec. 12 and Jan. 3. I kept him informed of what I was hearing. At my suggestion to him, I asked that a discussion of the opioid treatment center be added to the Jan. 3 agenda.”

She went on to state that she was the one who requested Acadia and the DOH attend the city council meeting when the clinic was first discussed. Frizzell also recently sent a letter requesting that the DOH not approve Acadia’s application for the time being.

Council President Shannon Sessions thanked Frizzell for her statement and advised the council to slow down and “listen to the facts,” since misinformation about the issue had begun to permeate discussion about the clinic. Sessions introduced a letter she drafted for the council to send to the DOH. However, in their review, councilmembers were unable to reach a consensus about the letter’s length and style, so it is still in the process of being drafted.

Discussion about transparency led the council to discuss future measures they could take to avoid communication issues in the future.

“Just, as an absurd example or strange example, if there was going to be a pedophile house or place of residency in Lynnwood that was supported by the state, I think we’d want to know about that and we wouldn’t want to have it right next to schools,” said Councilmember Jim Smith.

In other business, the Lynnwood Police Department provided information about the $1.25 million Community Oriented Policing Services (COPS) grant it received from the U.S. Department of Justice. Chief of Police Jim Nelson asked that the council accept $625,000 of the award to hire five new police officers. The grant, which can be used for three years, stipulates that the city match 25% of the funds over the period in time in which the money is dispersed.

The starting salary for a police officer is $130,000, and it will take a few months to hire and onboard new recruits. Nelson suggested that $25,000 of the grant be used for each officer’s salary in 2023. The remaining salary for 2023, estimated to be about $71,000 per officer, can be pulled from existing funds. The police department’s budget would not request an increase from the city for 2023, since unfilled staff positions have generated savings. According to Nelson’s proposal, in 2024 the police department will use $100,000 of the COPS grant for each of its five officers’ salaries. The council moved the COPS grant discussion to the next business meeting, where they will vote whether to accept the plan.

In other business, the council interviewed candidates for open positions on the Lynnwood Human Services Commission and the Parks and Recreation Board.

First, applicants Abby Karpowitz and Caroline Judd-Herzfeldt were asked to talk about themselves and what they would bring to the human services commission.

Karpowitz, who has lived in Lynnwood since 2009, discussed her love for the city. She said she felt motivated by the events surrounding the murder of George Floyd to take action in the community.

Judd-Herzfeldt was born and raised in Lynnwood and, after graduating from the University of Chicago with a master’s degree in clinical social work, moved back to be closer to her parents and start a family. Judd-Herzfeldt is a familiar face to the councilmembers, having written to them in the past to express her perspective.

“Do you agree with the location that chosen to site the OTP [opioid treatment program]?” Councilmember Decker asked Judd-Herzfeldt.

Judd declined to answer, stating the question was not relevant to her human services commission application.

“What I can say is that my concern…is about the way we talk about the people who would be using the OTP and misinformation,” Judd-Herzfeldt said, “even in this meeting about people’s private behavioral health and services and the medications they might take or even how long they should take them.” Stating she was referring to remarks made by Councilmember Jim Smith, she added: “I did not find that comment appropriate.”

Councilmember Shirley Sutton, who serves as council liaison to the human services commission, said she was excited to work with both volunteers.

Next, the council interviewed Thomas Krause and Hasti Afkham, candidates for the parks and recreation board.

Krause, a resident of Lynnwood for over 30 years and a long-time sports program volunteer, said he wanted to serve on the board because of his interest in sports and his desire to continue development of recreational areas. He explained his decision-making process, emphasizing the need to show up for the board role and recommend suggestions based on research.

Afkham, an urban designer and landscape architect, said she observed the growth in Lynnwood and saw an opportunity to make a positive impact. She emphasized her desire to create accessible places that would sustain the city’s growth and to develop relationships with the people around her.

In other business, Interim Human Resources Director Lori Charles requested that the council approve salary schedule corrections. Charles clarified that modifications were “clean-up” issues such as clerical errors and changing job titles and codes so the budget would not change fiscally. Many councilmembers asked how such an error could have occurred, and Decker proposed the council deny it until larger-scale changes were made to avoid such errors in the future. Charles responded that such an action would leave the department unable to hire a new human resources director, and that she had considered options for a more solid process with Frizzell. 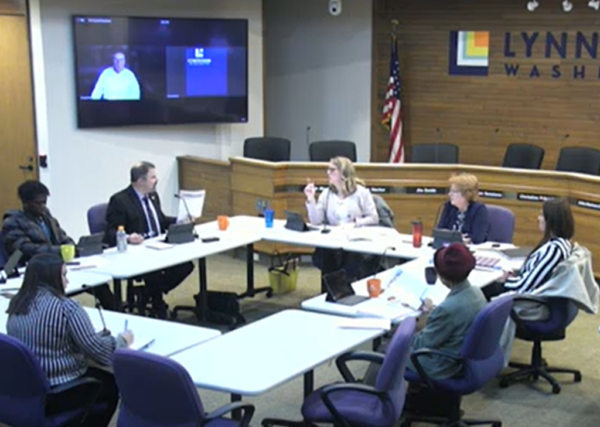 Councilmembers also were divided during a discussion about the city’s state and federal legislative priorities for 2023. Though the item was scheduled for the first meeting in January, the presentation was postponed as controversy over the methadone clinic grew. You can find the complete list of Lynnwood’s legislative priorities here.

While the council was united on safety as the city’s number-one legislative priority, not all members agreed with the items on the list that would be presented to the state. In particular, Decker asked that missing-middle housing be removed from the list.

“We had a discussion in the council about the use of that term [middle housing] and how that provided developers opportunities to come and tear down a house and put in a townhouse or a triplex or even a sixplex right next to a single-family home,” Decker said, “and, as I recall, we were not in favor of handing that ability over to developers without a lot more oversight discussion from the council.” He insisted that middle housing was not one of the 10 items on the action plan that councilmembers had discussed, and sarcastically suggested the possibility the council had a meeting agreeing to “missing-middle housing” solutions when he had not been present.

“Well, Patrick, if you want to take a breath here, it [the presentation under discussion] says ‘address the housing crisis by supporting efforts to revise policies and construct housing’…so, your comment is taken,” Frizzell responded. “Double-check that. Make sure we’ve got the wording right.”

“I don’t recall us not being able to use the term missing-middle housing,” Sessions added.

A revised draft of the legislative priorities, based on councilmembers’ comments, will be provided for future review.