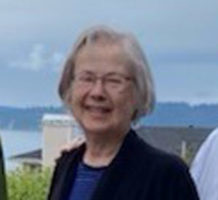 Betty was known in the mind of God in eternity past, and then born September 12, 1945, to Forrest and Willie Corrington in Hot Springs, Arkansas. The youngest of three daughters, Betty grew to her teen years, graduating from Hot Springs High School in 1963. She went on to attend the University of Arkansas and subsequently graduated from Ouachita Baptist University in 1967 with a BA degree in Psychology.

Betty then moved to San Antonio, TX and began working for the Texas State Employment Department as a job placement case manager. During the spring of 1968, she met a USAF lieutenant (John Olberg of Selah, WA) who attended her church one Sunday, proposed to her three weeks later, and was married in August.  She and John settled in Del Rio, TX near Laughlin AFB. Married life in Del Rio was so exciting that the major weekly activity was going to the laundromat and then watching the T-38s do takeoffs and landings on Friday nights. Betty became Director of the Head Start program in the adjacent community of San Felipe and made that a very successful venue for disadvantaged children.

In 1969, Betty and John transferred to Taipei, Taiwan, ROC and were there for 2.5 years. Betty taught PE and was librarian at Bethany Christian School whose students were equally divided among military, missionary, and diplomatic parents. She and John also sponsored the US Navy Chapel high school youth group and were active in Officers Christian Fellowship and made numerous life-long friendships.

Returning to Seattle in late 1971, it was time to settle down into the routine of civilian life. Betty became the consummate homemaker and helpmate and became active at Berean. She and John were blessed with three children–Kirstin; Eric who passed away at age 2.5 due to major heart defects, a secondary complication to Down Syndrome; and Ian. Betty always enjoyed her homes and entertaining and working in the garden. She did some substitute teaching from time to time in Kirstin’s classrooms as a special education para-educator and was always involved in her children’s school activities. Church activities involved sponsoring the college group, serving as a deaconess, teaching in several different positions, and working in the library, Awana and nursery.

During the last few years of her life, she suffered from Lewy Body dementia and Frontotemporal dementia. She passed into the heavenly presence of the Lord December 17, 2021, after 76 years of life and service as well as 53 years of marriage. She is survived by her sister Barbara of San Antonio, TX, her husband John, and children Kirstin and Ian, and grandson Kevin.

A Memorial service will be held Monday, January 3 at 3:00pm at Berean Bible Church, 2345 N. 185th  St., Shoreline, WA. In lieu of flowers, memorials may be designated to Things to Come Mission (https://tcmusa.org) or Grace Ministries International (https://gracem.org). The family requests that NO fragrances be worn at the memorial service due to severe allergic reactions.