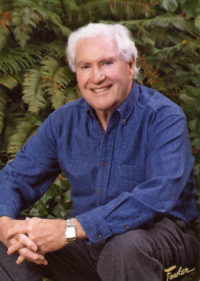 Bill passed away on Dec. 27, 2021 at the age of 91 years old. He is survived by his wife Margie; daughters Suzanne (Bernard) Ciernick and Maria (Michael) Prestel; and five grandchildren: William, Tony, Jacob, Sophia, and Richard Ciernick.

He was the youngest of seven siblings. Bill was born in Wolf Point, Montana in 1930. He grew up in Gig Harbor, Washington where he attended school. Bill graduated from Seattle University with a BA and MA and a Doctorate from the University of Idaho.

Bill was hired as an elementary school teacher in Edmonds, Wash. He was principal at Lynndale, Snoline and Beverly Elementary. He also served as Assistant Superintendent in the Edmonds School District. When Bill retired from public school he was hired by Seattle University to institute and coordinate the department of Professional Development. He was also the coordinator of Teacher Placement and taught education courses in the College of Education.

Bill was a long-time member of Holy Rosary Church in Edmonds where he volunteered in a variety of positions. He was a lifetime member of the Lynnwood Elks Lodge and Snohomish County teachers’ association. In retirement he continued to devote free time to Seattle University and the University of Idaho as a member of their Advisory Councils.

A Funeral Mass will be held on Friday, January 7, 2022, 10:30 a.m. at Holy Rosary Catholic Church in Edmonds; with a Committal following at Edmonds Memorial Cemetery.