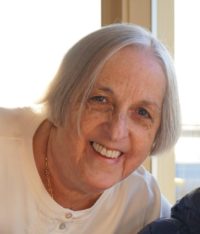 Bonnie was born July 17, 1947 in New Haven, CT, the only daughter of Marie (Rosinus) and Stanley Howard, loved and protected by her two older brothers. She grew up in Hamden, CT and received her degree from Boston Children’s Hospital nursing program in 1968. She forged many deep friendships with her cohort of classmates and others during this time and actively kept in touch with many of them for over fifty years.

Waving a cardboard “California or Bust” sign, she and one of her dear friends headed west in 1978. Once in California, she continued her work in pediatrics, eventually working with the Poison Control Center of Santa Clara County for most of her career. She created a life for herself in some ways different from what she thought possible within the constrains of her native New England, but similar in that it was a life filled with love and laughter. She had trips with her group of friends, and she made new friends.

Each of her by-then teen-aged nieces borrowed — and, in turn, probably stalled — her ancient yellow VW Beetle on the hills of San Francisco while staying with her for extended visits. She had many happy moments with her predeceased partner, Rod. She had numerous weekly phone calls, including long chats with her mom, during which she would cover a range of topics including her vehement opposition to the cold weather on the east coast. She had a thoughtful and uncanny knack for sending a perfectly-timed birthday card.

When she retired, she moved to Edmonds, WA, to be closer to her eldest niece and her family. She reveled in her Puget Sound views and the bustling small town, and found herself happy and thriving while volunteering with the Friends of the Edmonds Library, the Edmonds Center for the Arts, and the Mural Project Edmonds. Her family and friends can attest that she was both fun and strong-willed. She is survived by her two brothers and sisters-in-law (Ron and Mabel; Don and Pat), four nieces and a nephew, eight great-nieces and -nephews, three great-great-nieces, and many cousins.

Per her request, burial will be private. For those so inclined, donations may be made in Bonnie’s memory to Friends of the Edmonds Library (edmondslibraryfriends.org/donate/) or to the charitable organization of your choice.