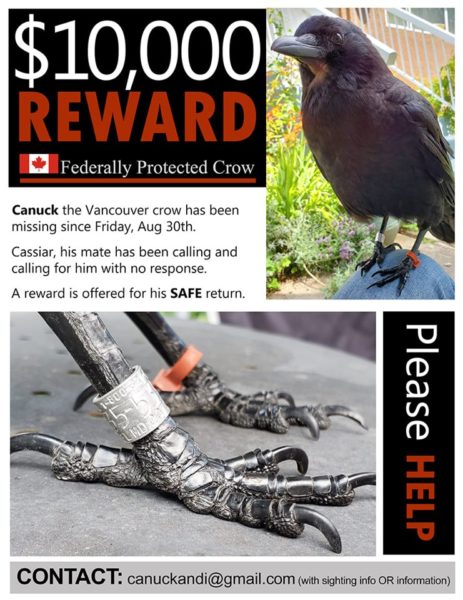 Have you seen Canuck the crow?

Bill Anderson, a local wildlife photographer, shared a message he received Thursday regarding Canuck, described as “a semi-tame wild crow that is famous on social media.”

According to this CBC article, Canuck became a media celebrity in 2016 after he stole a knife from a Vancouver crime scene. He wears a federal government of Canada band and an orange zip tie (see photo above).

The message Anderson received indicated there have been multiple sightings of a crow in Lynnwood with two bands, one described as white and one as red. The first sighting was Sept. 2 at the Lynnwood Fred Meyer store on 196th Street Southwest. On Wednesday, Sept. 25, a woman reported seeing the crow at Lake Forest Park.

Anyone who has seen Canuck or has information about him can email canuckandi@gmail.com.