Is there any of us who has not lost a loved one? Is there anyone who wishes they had said a few more words, asked a few more questions, of their dead loved ones? Aren’t there plenty of children who might benefit from understanding death, honor and learning more about their ancestors?

At the end of the month I would love to be in Mexico for the annual festival of The Day of the Dead, Dia de los Muertos. Often confused with Halloween, it is a very different celebration. Instead of fear, it fosters acceptance and understanding of death and grief. Instead of a solemn silence, it is a noisy, joyous, even humorous, time.

It falls near Halloween, is a multi-day celebration and includes many images of skeletons, so it is easy to understand the confusion. 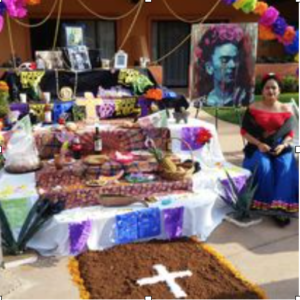 But the Day of the Dead is really a civilized way to grieve and honor those in life who have left us. If you watched the animated movie Coco, you saw the story: the tradition and beliefs surrounding the holiday in Mexico. You may have seen how families find comfort in celebrating the dead, helping them “cross over the bridge” for one day for a visit with the living and return from whence they came in peace. I find it quite healthy, psychologically. Elaborate and lovely altars — “ofrendas” — are built in Mexican homes with portraits of loved ones, surrounded by flowers, candles, favorite foods and drinks. The traditions vary among the different cities and villages in Mexico, but the idea is the same and dates back to the time of the Aztecs.

In North America, dealing with grief takes different forms, often a private mourning, honored as stoic and brave. Additionally, death is often treated with fear, a horror, to be shunned. (Maybe not so healthy, psychologically, given death’s inevitability?) Talking about death is to be avoided. Death is simply to be abhorred and avoided at all costs, treated as if it “won’t happen here.” In much of the United States, it is common to visit the grave or memorial of a loved one and even to speak to them, out loud, even shed tears. This also serves a purpose, of course, and is comforting to many.

But in Mexico, the Day of the Dead allows a permissive and public display of emotional loss with the full support of the community. People shop together for the decorations and food to prepare for honoring the dead. They visit graveyards together, often in a happy parade. Stories are told, laughter is loud and tears are shed openly together. It removes the stigma of talking about people you know who died. It shows children that death is part of life and you can hold in your heart the happy spirit of the dead. It is annual therapy.

Dia de los Muertos, a blend of Mesoamerican and Catholic traditions, inspires much of the artwork available in Mexico today. Most shops sell some art with the “Catrinas,” the rather lovely skeletal women, lavishly dressed in traditional western garb. That, too, is a cultural mockery. It represented, originally, the style of an upper-class woman who would embrace the European conquering culture, rather than the Indigenous culture of Mexico. It is meant to be funny, as are some of the gifts given to friends, including humorous obituaries of the living.

Day of the Dead laughs in the face of fear, mocks it, brings up images of loved ones who have died and invites them to the table for a reunion.

There is a reason, of course, this celebration falls at the end of harvest season, when crops have died to sustain the living, an ancient belief. You can see the celebration quite publicly in the streets of Mexico, in almost every village, with an annual parade and street festival, with feasts and handmade “Catrina” dolls held high in tribute. Children often go door-to-door asking for candy, intended to feed dead souls as they make their way to the other side. However, there is no “trick” or mischief if a treat is not given. It is a kinder, gentler way for children to understand death.

Halloween in the U.S. is certainly not about grieving death, but about costumes and fear and, yes, fun for the kids. There is certainly nothing wrong with it. I love Halloween and have made some fun costumes for my children and grandchildren. But it should not be confused with Day of the Dead. They are both fun. 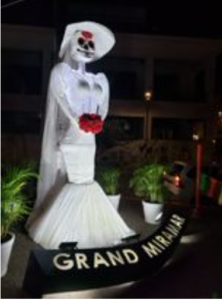 That tradition is celebrated wherever Mexicans have migrated, including the U.S., especially in the Mexican-American communities of the Southwestern states. You can see signs of it in several areas in Snohomish County, especially in the Latino markets.

As I have enjoyed all the rich traditions in Mexico, I find great joy and comfort in this wonderful Mexican national holiday, almost like a day of therapy. I can perhaps try to mimic it here at home with that favorite photo of my dear parents together and some talking and laughing with them. Now to find some good tamales!

Mauri Moore Shuler is bicultural, having spent her childhood in South America and much of her adulthood in Mexico and Central America.  She is a retired journalist and former member of the Edmonds City Council and trustee of Edmonds Community College.

(Photos by Karen Cabrera, who lives in Spokane and Puerto Vallarta)