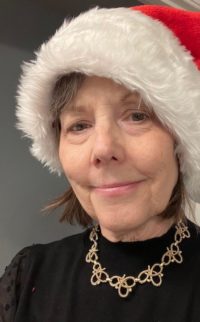 Christine Lorene Stay died at her Edmonds, WA home on October 20, 2022 after a valiant fight against cancer. Her husband Michael was by her side.

Chris was born in Frankfurt, Germany on January 10, 1952 to Donald Harry Stay and Jean Verna (Van Skiver) Stay. Upon discharge from the U.S. Air Force, her father took a position with Safeco Insurance and the family followed his work to several ports before settling for 10 years in Cincinnati, OH. Chris attended grade school and high school in that city. Several of her closest friends were found during these early years and she held those relationships close throughout her life.

Chris graduated from Finneytown High School in 1970 and moved with her family to Edmonds not long after. It was on a return visit to Cincinnati to visit lifelong friend Sharyn that Chris met Michael Pope and their courtship began. Michael followed soon after by visiting the Pacific Northwest and it is there that he first met his future in-laws. Don Stay may have been a little concerned at first, wary of the red-bearded, long haired young man on Chris’ arm, but all worked out in the end.

During the early months of their romance, Michael was training in the Navy and the two exchanged many letters. The story goes that eventually Chris let Michael know he needn’t send quite so many. Michael resolved that issue by moving as soon as possible to the Pacific Northwest. They were married on July 31, 1977. Chris is known to have kept every letter.

Chris and Michael’s son Travis Pope was born on the couple’s anniversary, on July 31, 1981. Daughter Kiira Pope arrived three years later on June 15, 1984 and with their arrival, Chris’ greatest work began – being a mother. She stayed home with her children for several years, regularly volunteering at their schools and with other organizations. She was beloved by many young people who entered her life through her children.

When her children were older, Chris became an editor for Seattle’s Child Magazine, where she continued to work until 2018. She was an avid reader and a stickler for grammar and those who worked with her greatly valued Chris’ sharp proofreader’s eye, incredible organizational skills and her wry sense of humor.

Years of editing Seattle’s Child event calendar enhanced her love of theater in the many Seattle area playhouses. Being especially partial to musicals and dance she looked forward to seeing her favorite actors in new productions.

Chris loved nature and plants, spending many loving hours working in her own garden. And she loved the gardens of her friends, her favorite public gardens and beautiful private gardens, especially the Northwest Perennial Alliance’s (NPA) Open Gardens each summer. She has even opened her own garden for NPA members. She was always in search of a garden that would be alive with birds and animals all year around. But not for rabbits, who were too fond of her delectable plants. She was an active member of the Late Bloomers, an NPA neighborhood garden club, where she made lifelong friends. Direct quote from Chris, “I like garden tours” was not an understatement!

She was also a Resolution Book Club member but alas the pandemic made it very difficult for this group to meet in person. Chris, the book club and friends around the country did share their favorites, a mystery before bed was a daily routine. She loved hardbacks and would say thank you for the Sno-Isle library system.

Chris followed the Cascadia Art Museum here in Edmonds, where she never missed a show. Chris shared her mother’s love of early American antiques, loved good food with friends and family and was a great human to her beloved dogs.

She was also a big fan of PBS and especially enjoyed watching mysteries with friends and her adult children. Lately she was including Ted Lasso, Only Murders in the Building, So You Think You Can Dance, Bosch and more. She always kept abreast of the news, followed politics closely, cared deeply about the environment and the city she lived in.

Chris nurtured wonderful friendships throughout her life. She reached out. She asked questions. She listened. Her raised eyebrow was worth a thousand words and her heart huge. Over her lifetime, her quiet, gentle nature attracted a wide variety of people. She never forgot them, each and every one was important to the person she became.

As she fought against first a rare blood cancer (Waldenstroms) and then against a second highly aggressive cancer with courage and grace, her sense of humor was intact and her never-say-never attitude an inspiration.

Living with Waldenstroms for over five years, Chris fought mightily all summer and fall as a second cancer presented obstacle after obstacle and each treatment came up short. Chris was highly anticipating the birth of her first grandchild, due in November. She unfortunately passed away just two weeks before her granddaughter was born.

As a wife, mother and friend, Chris could not have been more loved. She is survived by her husband, Michael Pope, her son Travis (Jenna) Pope, her daughter Kiira Pope (Matt Englesby) and their new baby Poppy Lorene Englesby, her sister Lauren Stay, her brother Greg Stay, her feisty blue heeler Maisie, and her many friends.

Her parents and brother Andrew Stay predeceased her.

A memorial will be held in Edmonds at a later date. As a remembrance, the family asks you to consider donations be made in Chris’ name to Fred Hutchinson Cancer Center, Northwest Perennial Alliance at northwestperennialalliance.org/Donate, or your local food bank.

And please keep Chris in your heart.