With plans to redevelop the south Lynnwood neighborhood underway, Lynnwood city staff are looking to area residents for feedback on how to represent one of the city’s most diverse neighborhoods.

At its Oct. 21 work session, the Lynnwood City Council received a briefing on the South Lynnwood Neighborhood Plan– an effort by the city’s Parks, Recreation and Cultural Arts Department to address social inequity in south Lynnwood, which is experiencing significant inequities including income and language barriers.

The concept is part of the city’s Park, Arts, Recreation and Conservation (PARC) Plan adopted in 2016, which involved city staff creating equity composite maps that identified areas in the city by income, race, household language and poverty to locate areas in need.

“There’s a lot going on there and it’s a really interesting neighborhood to look at,” she said. “We also want to make sure we have the things in place to keep it the neighborhood it is today and make it better for everyone who lives there.”

South Lynnwood is also the location of many of the city’s local businesses and the city has a vested interested in ensuring their success. Recently, the council held a roundtable discussion where local business owners were invited to offer feedback to the council. 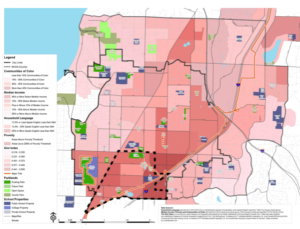 At the Monday meeting, city staff briefed the council on Phase 1 of the project, which began in early 2017 and ended in 2018. Phase 1 focused on increasing the city’s strength and presence in the neighborhood through community reach like National Night Out at Northwest Life Church, participating in Afro-Latino Festival and Meet Me at the Park.

The plan is currently in the early stages of Phase 2, which includes continued public engagement and conducting an existing conditions survey that will collect data based on income, housing, economic and environmental conditions. Phase 2 also includes identifying projects and policies to stabilize housing in the area, improving access to transit and non-motorized transportation. The plan is scheduled to continue through 2020.

According to Lynnwood Deputy Parks Director Sarah Olson, plans for the four-acre park built in 1978 include creating a community space for neighbors to gather by adding a picnic shelter, installing a new playground and updating the heavily-used lawn. Based on community feedback, Olson said that a new urban soccer field will be added to the park, since soccer is the preferred pastime for many of the neighborhood’s residents.

“It’s going to get a big facelift with this project,” she said. “We really listened to the community and what they wanted.”

Other improvements to the park include making it Americans with Disabilities Act (ADA) compliant, which it currently is not with the concrete curb surrounding the park, Olson said.

The project will also include a mural to be painted on the park’s restroom building. The mural will be a collaborative effort between a team of artists and College Place Elementary School students, who will work together to design and paint it. Work on the mural is scheduled for the spring of 2020.

Through its outreach initiatives, the city has secured $1.3 million in Washington State Recreation and Conservation Office grants for the park’s improvement projects. Additionally, the city received a $260,000 granted donated by Kaiser Permanente through the Trust for Public Land, which helped with the community outreach. The renovations are anticipated to cost up to $2.7 million.

The project is in the design phase, which will be completed at the end of the year and will go out to bid in early 2020. Construction is scheduled to be completed in late 2020.