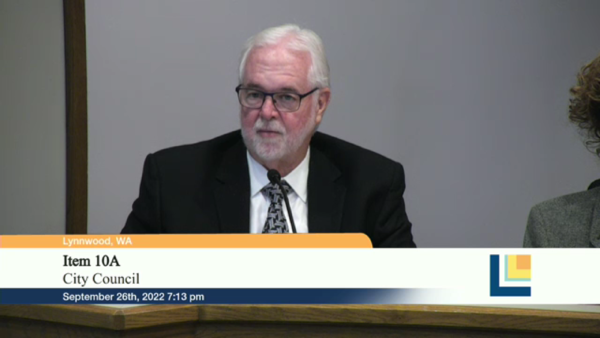 The Lynnwood City Council spent a large portion of its Sept. 26 business meeting discussing the findings of the external investigation that was launched into allegations of racial and sexual discrimination by Councilmember Jim Smith in May of this year.

The investigation, conducted by Haggard & Ganson LLP, substantiated one claim each of racial and sexual discrimination. The city council earlier this month released a formal statement regarding the findings, but on Monday night further discussed how they planned to deal with the situation.

The motion failed, with only Councilmembers Smith and Shirley Sutton voting yes.

“It’s interesting that we are not allowed to be totally in the daylight on this subject,” Smith said. “And I disagree with the attorney, but it does seem like she’s had a few more years of schooling than me, so I guess that’s the way we’ll go.”

Smith accused both Lynnwood Mayor Christine Frizzell and an unidentified councilmember of violating the executive sessions by sending emails about the investigation to city staff as well as talking to the press about the matter. Because of this, he said that minutes of the executive sessions should have been released to the public, since information had already been leaked to various sources.

“There’s ways to make things work, where people can get along,” Smith said. “But rather than getting to a place where people can work together, we’re getting an administration that is trying to make trouble. We need to come up with a better solution to this.”

As he has done before, the councilmember proposed a second external investigation into the matter to “bring balance” to the situation.

“If it’s not fair and balanced, it’s meaningless,” he said.

However, Smith’s request was quickly shot down by other councilmembers, who said they felt like too much time was being wasted on the logistics of the investigation and the real matter at hand was not being properly addressed.

“We as a council have to face [the findings of the investigation as they are], regardless of whatever we think of it personally,” Council President George Hurst said.

Hurst criticized the way Smith handled the report’s findings, saying that instead of apologizing and working to better himself, Smith has only been concerned about defending himself and his actions.

“Councilmember Smith’s actions after the report was made public really has confirmed for me this conclusion,” Hurst said. “He has made no statement that indicates interest into why these allegations were made. Instead, he has attacked the DEI Commission, he has gone on a regional conservative talk show, and he allowed that talk show host to verbally bully Leah Jensen. He continues to be oblivious to his actions. Just last week, the mayor sent out an email chastising Councilmember Smith for inappropriate behavior during a conversation with a city staff member after last week’s council meeting.”

Hurst briefly mentioned the possibility of a censure, but said he did not think it would be appropriate at this time. He also suggested stripping Smith of his council leadership post, but the rest of the council did not seem interested in doing so.

Councilmember Josh Binda agreed that the council as a whole needs to take responsibility for the findings of the investigation and work toward changing for the better rather than being defensive.

“We must acknowledge Leah’s experience as a Black woman and validate this as unacceptable,” Binda said. “Instead of being defensive, we should act with humility and accountability. Sometimes being a leader means being as sensitive as we are strong, to listen as much as we speak and to understand as much as we seek to be understood. As a council, we are held to this as leaders of our community. I stand with Leah Jensen and believe we need to do better as a body of government and as a community to continue to create a safe and equitable place in the City of Lynnwood.”

Councilmember Shannon Sessions also voiced her concerns, saying that Jensen has been nothing short of wonderful in all the years they’ve worked together and should not have to endure the situation at hand.

“I don’t condone the way Councilmember Smith sometimes speaks to many of our employees: The mayor, fellow councilmembers and some community members. At times, he can be more egotistical, discourteous, sharp and sometimes startling.”

Sessions said she isn’t sure the investigation was handled as it should have been but remained adamant that she was not interested in opening a second investigation into the same matter.

“As elected officials, there’s very little we can do against any of our councilmembers,” Sessions said. “But one thing we can do is hopefully prevent future challenges for all of us.”

Sutton agreed with Sessions that no more time needs to be spent discussing the outcome of the investigation and hoped it would not be a topic of discussion after Monday night.

“This is a grown-up situation, and we need to act grown-up about it and be done with it,” Sutton said.

Councilmember Julieta Altamirano-Crosby talked about experiencing racial discrimination while a councilmember and said she hopes no one else has to endure the same treatment.

“Sometimes, I want to throw in the towel,” Altamirano-Crosby said. “But I am still here to open the doors for others that come in behind me and they cannot suffer the same way I’ve experienced here.”

Smith responded to the councilmembers’ comments regarding the investigation, saying that he has never disrespected Leah Jensen’s work and feels like he is being blamed for what others are saying about her.

“During this investigation, I’ve never disrespected what Leah Jensen has done for this city,” he said. “In fact, I’ve said the exact opposite. What I do say is the complaint itself: I believe it was flawed. Don’t bully me. Don’t attack me with [the talk show host’s] words. Attack me with my words.”

Smith has yet to publicly apologize for the claims against him and continues to deny he was at fault regarding the incident.

In an email response to Lynnwood Today’s requests for a comment, Smith said, “I feel bad for Leah as a person. The administration should have handled it more professionally and with sensitivity. No one, especially me, wants someone to feel bad or hurt.”

Smith continued to say during the meeting that city staff should be taught how to have discussions without getting easily upset, as he believes this would solve many issues with not only the council, but the city as a whole.

His hope, Smith said, is that in the future, the members of Lynnwood’s staff will work to internally resolve issues before creating another scenario like this one.

“We need to be coming together, not dividing,” he said.