Alicia Guy from Homage Senior Services talked to the council about possible funding for the Center for Healthy Living. The center offers a number of services to seniors in the community like hot meals, social activities, cultural celebrations, transportation and translation services. The programs serve approximately 250 seniors every week.

Guy said when the COVID-19 pandemic hit, the center lost its biggest sponsor – Verdant Health. Because of this, the program is about $300,000 in debt and desperately looking for help from the community.

Guy is requesting $130,000 from the city’s ARPA fund, which will help the center stay up to date on its mortgage and other bills. That will still leave the center with about $170,000 more to raise but Guy said staff is looking at other options to fill in those gaps.

The council also heard from Sgt. Lindsay Carter from the Lynnwood Police Department regarding the police flex fund. Carter is currently the only officer in the department’s Community Health and Safety unit – which oversees the flex fund – due to staffing shortages.

“Some of the things we use flex funds for are temporary shelters such as hotel rooms, transportation like buses, taxis to and from treatment, medical appointments, IDs, documents, clothing … personal care items, laundry gift cards … hair cut gift cards, food,” Carter said.

Each year, the department receives $5,000 from Snohomish County for the fund as well as any donations that are offered throughout the year. However, Carter said those funds disappear almost as quickly as they come in since needs are so great in the area.

Carter’s unit also receives vouchers for five hotel rooms for temporary stays, but those rooms have been booked solid since she joined the unit in May.

The police department is requesting $20,000 in ARPA money to help the city reach more individuals who need help getting back on their feet. Deputy Chief Cole Langdon said the unit could easily use much more funding than that, but the department did not want to overwhelm the council with large funding requests.

“What we’re asking for with this work is bridges to get people to the next step,” Langdon said.

“A Shop Local campaign means we are encouraging people in and outside of Lynnwood to come into Lynnwood and do their shopping, dining, entertainment and services here,” Jones said during the council’s Sept. 6 meeting. “Basically, spending their money in Lynnwood, which is going to add to the economic cycle, create jobs [and] contribute to the sales tax revenue.”

The council had requested more details regarding a plan to create a website for the campaign and Jones shared what that would look like Monday night.

The website would showcase each participating business and would be interactive for customers, who could click on individual stores to learn more about them. On top of that, the site would also be accessible for hard-of-hearing and visually impaired individuals.

While Jones had originally asked the council for $40,000 in ARPA funds, the request has been updated to $43,000 to cover website costs.

Councilmember Patrick Decker asked Jones if she had considered requesting some sort of payment from businesses interested in participating to help offset the costs. He suggested that even a $50-$100 sign-up fee could help offset website costs.

Jones said she would look into that but is worried even a small fee will deter smaller, “mom and pop” shops from signing up.

Of the two full-time equivalents (FTEs) the district has asked the city to fund, Sordel said the plan is to place 1.2 FTEs into three of Lynnwood’s elementary schools: Spruce, Meadowdale and Lynndale. These schools currently do not offer any mental health services and the district is hoping that can soon change.

“The other .8 FTE I think is really important to stay in collaboration with the Meadowdale High School’s new community health center that has just opened,” he said.

The health center currently offers mental health counseling on two of the five days it’s open, and Sordel said staff are hoping to quickly acquire funding to keep services available for at least four of the five days.

“Through this important funding that we are proposing tonight, we would be providing the same services that are offered now to those who have Medicaid, those who have insurance, but the door would be open wider, allowing us to serve additional students in our community and our city,” he said.

The Edmonds School District is requesting $415,720 in ARPA money to cover a two-year funding cycle.

Councilmember Jim Smith said he didn’t feel like any money should be coming out of the city’s ARPA funds for this cause, adding he believes Verdant Health should be working to fund the entire project on its own.

Altmirano-Crosby said that while Washington state colleges have mostly eliminated their SAT and ACT test requirements to be accepted into colleges, many universities nationwide still require that testing. Altamirano-Crosby said there should be a program in place to help all students in the city prepare for those tests as well as receive generalized tutoring based on their needs.

Tutoring could be needs-driven, curriculum-driven or customized for any student, she said. Having spoken with four different tutoring organizations, Altamirano-Crosby suggested looking at both in-person and virtual tutoring to cater to more students.

The tutoring, which will most likely take place after school or on Saturdays at designated schools or at the Lynnwood Library, is estimated to cost roughly $45-$60 an hour.

Altamirano-Crosby asked the council for $60,000 in ARPA funds for a three-year tutoring program.

Some councilmembers were on the fence about whether tutoring for SAT and ACT tests is actually needed now. Sessions, a mother of high school-aged children, said she has heard from various sources that most, if not all, U.S. colleges are planning to stop requiring test scores for entry. Washington, she said, just happened to eliminate them earlier due to the COVID-19 pandemic.

However, Decker said he thinks higher-level tutoring could be beneficial regardless of whether the students end up needing to take the tests for college admission.

“When they are accepted to colleges and universities, they’re going to be more successful because they will already have these test-taking skills,” he said.

Binda said the program would include the Lynnwood Police Department and A Better Track – which helps at-risk youth – to provide students in Lynnwood’s schools with financial, mental health and job readiness resources.

Deputy Chief Langdon said the police department views the program “as a great resource, especially with us not having school resource officers right now. Anything we can do to connect with youth that might be rubbing up against the line, any sort of intervention is great.”

Binda did not yet specify a specific amount he is requesting but will provide that information to councilmembers in the next few weeks.

The council requested more information about Binda’s proposal before further discussing the matter, as it was unclear how any funds would be used.

In other business, the council discussed a lease extension agreement for the city’s Development and Business Services office space.

According to Development and Business Services Director David Kleitsch, the current lease for the office space – located at 20816 44th Ave. W. in Lynnwood – ends in June 2023, but the landlord has offered two, three-year lease extension options for the department.

In the last three years, the city has spent roughly $924,000 in rent for the office space. The rent will slightly increase for the next three-year period, bringing the total to roughly $967,000, Economic Development Manager Ben Wolters said.

Wolters said that given inflation and a lack of available office space in Lynnwood, it would be wise for the city to renew the lease rather than look for other options.

“We really don’t believe we can find a better deal in today’s market,” he said.

Sessions said she doesn’t see any reason why the department should have to move, as the city worked so hard to get the office space that the department is currently in.

However, Councilmember Smith replied that the lease is a waste of money for the city and wants the department to look into cheaper options or ones that accommodate more work-from-home positions.

The council will receive more details about the lease extension and vote on the matter at a later meeting. 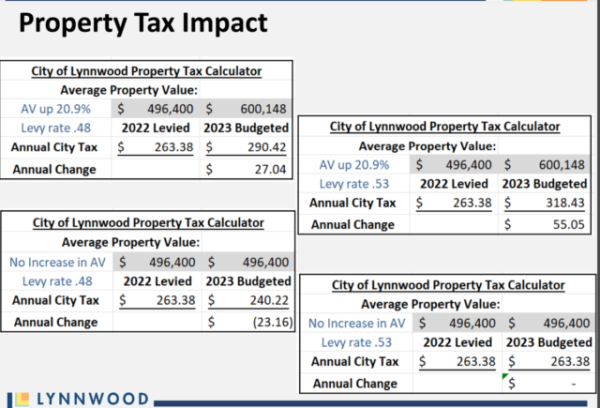 However, since the total assessed valuation of the average Lynnwood home is also set to increase due to rising inflation costs, the levy rate per every $1,000 of assessed value is expected to decrease from 53 cents to 48 cents in the new year.

Although that decrease may seem like a good thing, Lynnwood homeowners should still expect to see their property tax bills increase slightly in 2023.

Meyer said councilmembers will receive more information on Lynnwood’s property tax rates on Oct. 10 when the preliminary 2023-24 budget is shared with them. A public hearing is set to be held on Nov. 14 and the property tax ordinance is expected to be adopted on Nov. 21.