The Lynnwood City Council at its Monday business meeting spent the majority of its time discussing the Lynnwood Municipal Codes related to approving candidates to city boards and commissions.

The decision on whether to approve Rael had been postponed to the council’s May 23 meeting, but Council President George Hurst decided to revisit the topic on Monday after a questionable statement from the DEIC itself.

“‘By imposing restrictions that would eliminate participation by Lynnwood residents who live in the municipal urban growth area, council is intentionally choosing to create barriers to equitable representation,’” Hurst quoted from the statement given. “‘This demonstrates patterns of exclusion and discrimination.’”

Multiple councilmembers said they were offended by the commission’s statement.

“Frankly, I’m wondering if some of those folks need to read the book, How to Win Friends and Influence People,” Councilmember Shannon Sessions said. “This isn’t the first time that this group has written a letter to us or come to us in a way that is a bit volatile. It’s OK not to agree with us. All the boards and commissions can necessarily not like what it is that we do. But the other boards and commissions don’t say that the council is ‘intentionally choosing to create barriers to equitable representation.’ That is volatile. And it’s false.”

Sessions said she’s disappointed that the DEIC feels it can make such statements about the council. According to her, if the commission truly cared about the opinions of the BIPOC community in Lynnwood, they would understand why the council is hesitant to accept members from outside the city limits.

Decker also pointed out that the code for approving members is vague and open to misinterpretation.

“[The council was] scolded for not bringing [Lynnwood residents] to apply for some of these positions,” Councilmember Jim Smith said. “So, when we do it, and then they’re overlooked, it is disturbing to me.”

Smith also blamed the commission for a lack of transparency in the application process. When the council had previously asked for complete lists of all the commission applicants, Smith said it was told it was not allowed to have access to such information.

“We should be able to get that information whenever we ask for it,” he said.

Lynnwood’s Racial and Social Justice Coordinator Douglas Raiford joined the meeting to attempt to offer some clarification to the council.

Raiford said that although Rael lives outside the city limits, she stood out from other applicants due to her vast amount of experience and first-hand knowledge of diversity, adding she is a woman, Filipino and part of the LGBTQ+ community, as well as working full-time in the human services field.

“The commission jumped at the opportunity to have her and have her voice and her wealth of knowledge be brought to better this community,” he said. “It was a gift to have her as a nominee.”

Councilmember Josh Binda agreed with Raiford, saying that the staff picks the candidates who seem to be the best fit, and the council should not react negatively if those candidates aren’t whom the council would have chosen.

“We should have faith in our staff in the aspect that that’s who they’re picking, and not be upset when they’re not picking … certain people, regardless of who we [the council] deem fit,” Binda said. “We are the council, and that’s [not our job].We should leave that up to them and not voice who we think should be on [boards and commissions].”

The council will vote on whether to confirm Rael at its May 23 meeting, as well as vote to amend the code to better clarify who can apply for Lynnwood boards and commissions.

In other business, the council heard from Lynnwood Deputy Director Sarah Olson regarding the park capital planning process. Information on the program is brought to the council every year and does not require any action.

The City of Lynnwood maintains over 418 acres of parkland, almost eight miles of trail corridors and has 17 developed parks, as well as multiple other facilities.

Olson said the city’s parks, recreation and cultural arts department has been working hard to ensure well-balanced planning for the future of the parks. Planning is broken into four categories: condition, distribution, demand and experience. 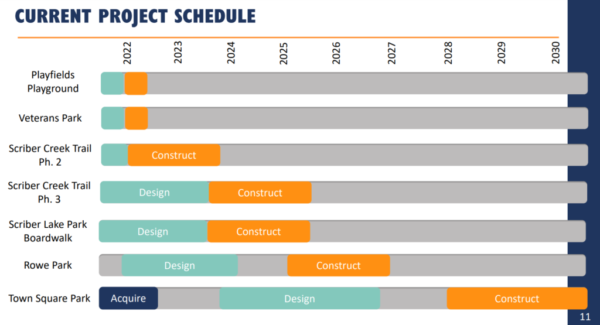 “Our Parks Love Project is our current planning project focused on the ultimate goal: To create an updated, comprehensive park, trail and recreation facility capital plan with every project evaluated for how well they support health equity, environmental resiliency, accessibility and inclusion,” Olson said. “Every park improvement that we do going forward, is going to have design with the lens of universal access as much as possible.”

Each capital project takes approximately three to five years to complete, which is why the department updates the council yearly so it can keep track of how each project is progressing.

In other business, Economic Development Manager Ben Wolters came before the council to discuss the vacation of a portion of 64th Avenue West.

The vacation planning comes after councilmembers approved the Harris Ford expansion project. The project, which will extend the dealership’s showroom, requires the purchase of a section of 64th Avenue West, which needs to be vacated for construction to begin. According to Wolters, if construction begins soon, the new showroom will be complete by the end of November.

After evaluating the street, staff determined that the only accommodation needed is a utility easement for the existing sewer lines. Other than that, Wolters said construction is ready to begin.

Harris Ford has also agreed to construct a dedicated right-turn lane on 200th Street Southwest to mitigate traffic build up.

A public hearing regarding the 64th Avenue West street vacation will be held at the council’s May 23 meeting.