The Lynnwood City Council focused its Nov. 21 business meeting on discussing the city’s 2023 property tax levy as well as its 2023-24 biennial budget.

At the council’s Oct. 5 meeting, Lynnwood Finance Director Michelle Meyer told councilmembers that the levy is proposed to increase by 1% – the maximum annual increase allowed by state law – rising from $4.5 million to $5 million in total collections And while the levy rate per every $1,000 of assessed value is expected to decrease from 53 cents to 48 cents in the new year, Meyer said the average Lynnwood homeowner should still expect to see their property tax bills increase by roughly $27 in 2023.

A public hearing was held for the proposed tax levy at the council’s Nov. 14 meeting and councilmembers requested clarification on other outcomes should they decide to deny the levy increase.

Meyer showed the council charts of what the average Lynnwood taxpayer’s bill would look like if the council approved the levy increase or left the overall amount the same at $4.5 million.

“If we were to leave the amount flat [at $4.5 million], the rate would fall even further … to 44 cents,” Meyer said. “And you can see, there’s no impact on the homeowner even though their house has gone up in value by $100,00 in valuation.”

By law, the levy must be approved or denied before the end of the month and the council is set to vote on the proposed levy during the Nov. 28 meeting. 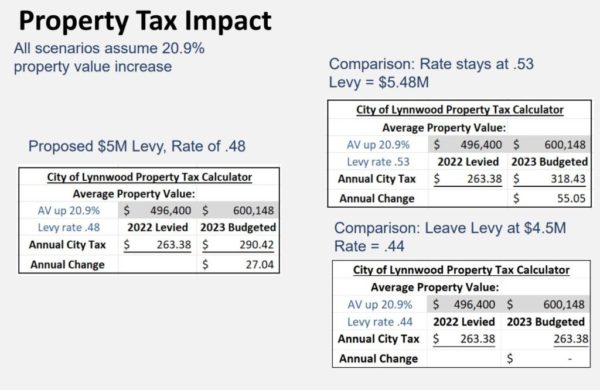 During the council’s discussion of the city’s 2023-24 budget, staff salaries were the focus. Councilmember Patrick Decker said he didn’t feel comfortable approving a higher tax levy when he saw how much money some city staff positions are being paid.

“The median household income in Lynnwood is $63,000,” Decker said. “That’s not per person; that’s per household. A lot of those are dual income. However, a step-seven director in the City of Lynnwood is making … $216,000 a year before benefits. [After benefits] we’re assuming this is around a $280,000 position. And we’re going to raise taxes on the residents through the real estate tax while we are paying close to $300,000 to directors in the city. I can’t justify raising taxes to pay essentially $300,000 salaries.”

Councilmember Shannon Sessions said that while those salaries seem like an absurd amount, very few staff are at a step-seven director position. She also reminded Decker that educated individuals with professional expertise should be paid well for their craft, adding she didn’t feel like they should be compared to the average Lynnwood resident who may not even have a college degree.

Also during the budget discussion, Council President George Hurst pointed out that according to the information given, the city would finish the biennium with roughly $4 million extra than what it was required to have by law. He suggested to Meyer that city staff look into using that extra money to support a few additional funding requests that some city departments had made.

The council is set to vote on the city’s 2023-24 budget at its Nov. 28 meeting but is not required to reach a decision by that time and may take longer to discuss the matter before voting.

In addition, Meyer also presented the council with the city’s final 2021-22 biennium budget amendments. The current budget was adopted in November 2020 and was initially amended in December 2021 as required by law.

“We also need to do a final amendment before the end of the year,” Meyer said, “to increase the expenditure authority for anything else that we’re going to go over budget on.”

Meyer said a few amendments need to be made, but all the changes are being made with funding the city already has in the budget; the money is just being transferred to different accounts.

“Nothing for the general fund is in here,” Meyer said. “These are all restricted funds. We’re using the funds that are already in the balance.”

Councilmembers did not make any comments on Meyer’s proposed amendments to Lynnwood’s current 2021-22 budget.