The Lynnwood City Council at its Monday, Oct. 17 work session received six presentations regarding the city’s preliminary 2023-24 budget as well as a final presentation on Community Transit’s new pilot program.

The complete proposed budget was presented to the council at its Oct. 10 meeting and councilmembers will receive presentations and hold discussions on the matter until Oct. 31.

Council President George Hurst presented the city’s legislative budget, which covers city council operations. Hurst said councilmembers can expect to see increases in almost all sections of the budget for the upcoming years due to inflation.

Hurst said the increase is mainly due to rising city attorney fees. In 2021-22, the city paid roughly $40,000 in fees, but during the next two years, those fees are expected to increase to roughly $73,000.

Other cost increases come from Swagit, the video software used to stream council meetings, plus funds for meeting security and for councilmembers to attend events.

In addition, Hurst said $14,000 had been added to the budget for council technology upgrades. Over the past few months, he said, some councilmembers have voiced complaints about the city-issued iPads and requested the council switch to laptops. However, Councilmembers Julieta Altamirano-Crosby and Shannon Sessions said the council should consider using that money for other matters, as the iPads work fine for what the council needs.

The proposed executive budget is expected to almost triple in size.

Moore said the executive budget – proposed at $3,333,600 – will help the city address some of its major priorities, including continued recovery from the COVID-19 pandemic, preparing Lynnwood for the arrival of the light rail and ensuring that the city’s Strategic Plan is being followed.

However, Councilmember Jim Smith said he did not see the benefits in increasing the executive budget by such a large amount.

“The executive department is tripling in budget,” Smith said. “That’s concerning to me. We should be doing the opposite. We should be asking what we can do to slim down.”

The council then heard from Lynnwood Finance Director Michelle Meyer regarding both the finance budget and the non-departmental budget.

Meyer said the main reason for the increase is a reinstatement of the meter reader position that was previously terminated. While physical meter readers were replaced by automatic meter readers, Meyer said it was soon realized that employees were still needed when meters needed to be fixed or set up.

The only other significant change to the section is that the clerk and records positions were transferred from finance to the executive branch.

The non-departmental section – which Meyer described as covering any area of the city that doesn’t seem to fit in any other budget category – is expected to increase by roughly $2 million, bringing the total to $11,450,300.

Meyer said the non-departmental section is seeing a number of changes, including 2021 Community Justice Center and recreation center debt service bonds, a red light camera contract and citywide membership fees. The budget will still transfer $53,000 to the Solid Waste Fund – the same amount as the last budget. Those funds, Meyer said, are spent on public education and awareness on topics such as waste reduction, recycling and composting.

IT Director Will Cena also came before the council to present the proposed IT budget.

Cena said the only reason councilmembers are seeing a proposed increase is because of the rising cost of technology and the reinstating of the IT managerial position, which was vacated when Cena was promoted.

“With IT and technology, either we’re going forward or we’re falling behind,” Cena said.

The last presentation the council received Monday night was from the human resources department.

HR Director Evan Chinn told the council the proposed $1.8 million increase in his department’s budget will mainly support leadership and other necessary staff training. The department does not foresee adding any new positions in the next two years but wants to focus on adequately training the employees it already has to strengthen the department. 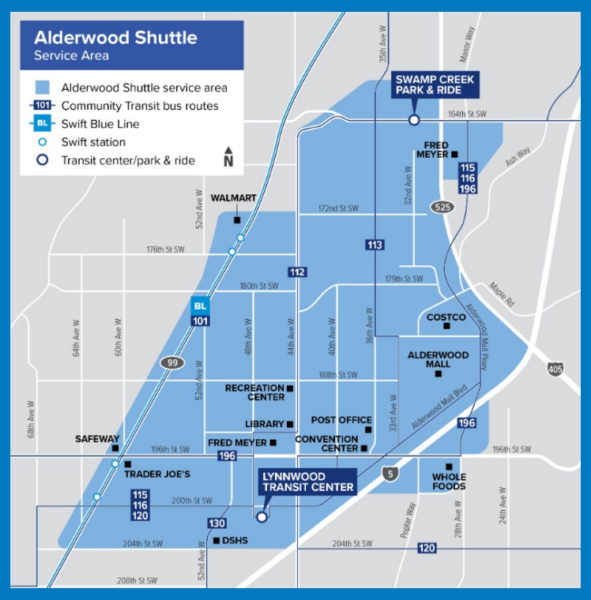 In other business, the council received a final presentation regarding Community Transit’s pilot program: Zip Alderwood.

Jennifer Hass, community program manager at Community Transit, said the Zip Alderwood shuttle will cost $2.50 for each adult and be free for anyone under 18 – the same as a local bus fare. The shuttles are also reduced-fare eligible. Like other transit systems in the area, riders must have the exact dollar amount if paying with cash, as drivers do not carry change. Hass said commuters can pay by cash, through the app, use a bus ticket or pay with ORCA.

Shuttles can be hailed by a smartphone app, called GOIN’, or a phone call. Zip shuttles can pick up and drop off customers from any location in specified areas.

Hass said staff at Community Transit will be using the pilot period to collect as much feedback as possible.

“What does success look like for this project?” she asked. “After the pilot period, how do we continue it in a beneficial way?”

Councilmember Patrick Decker asked what screening process drivers have to go through. Hass assured the council that every driver is required to meet Community Transit standards, which includes passing both an overall and driver background check as well as a drug and alcohol test.

The program will launch at 5 a.m. Thursday, Oct. 20 in the Alderwood Mall area and Hass said she’s excited to see how the program will be utilized in the coming months.