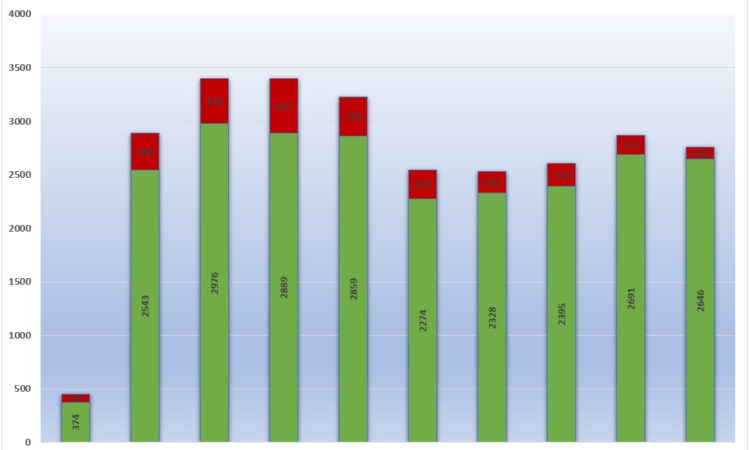 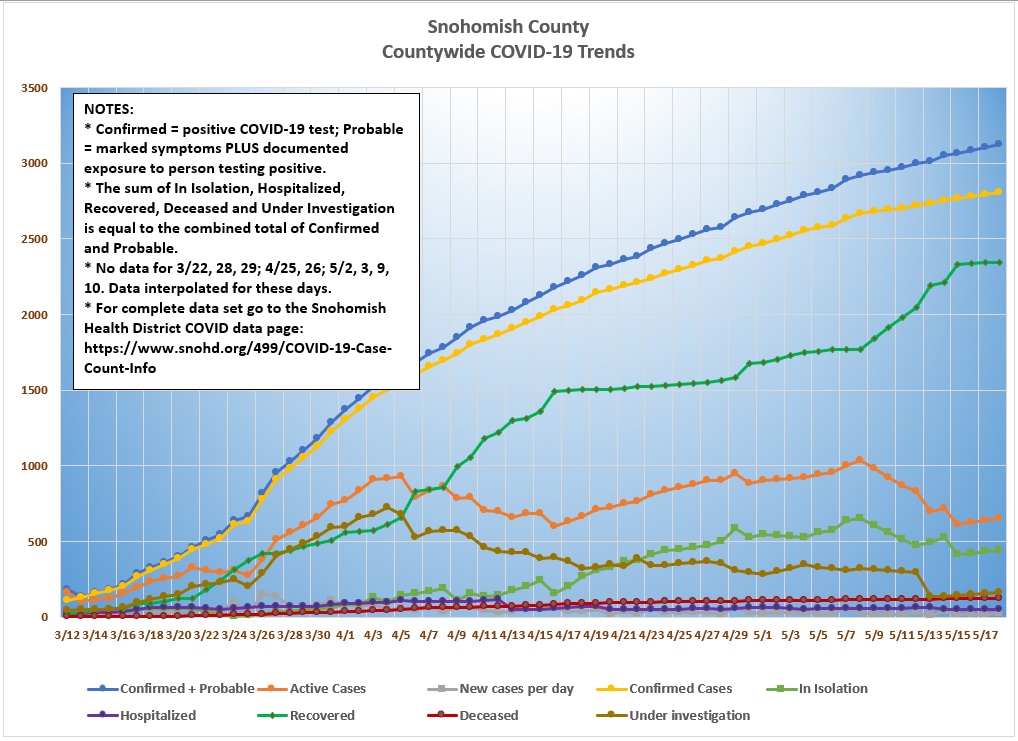 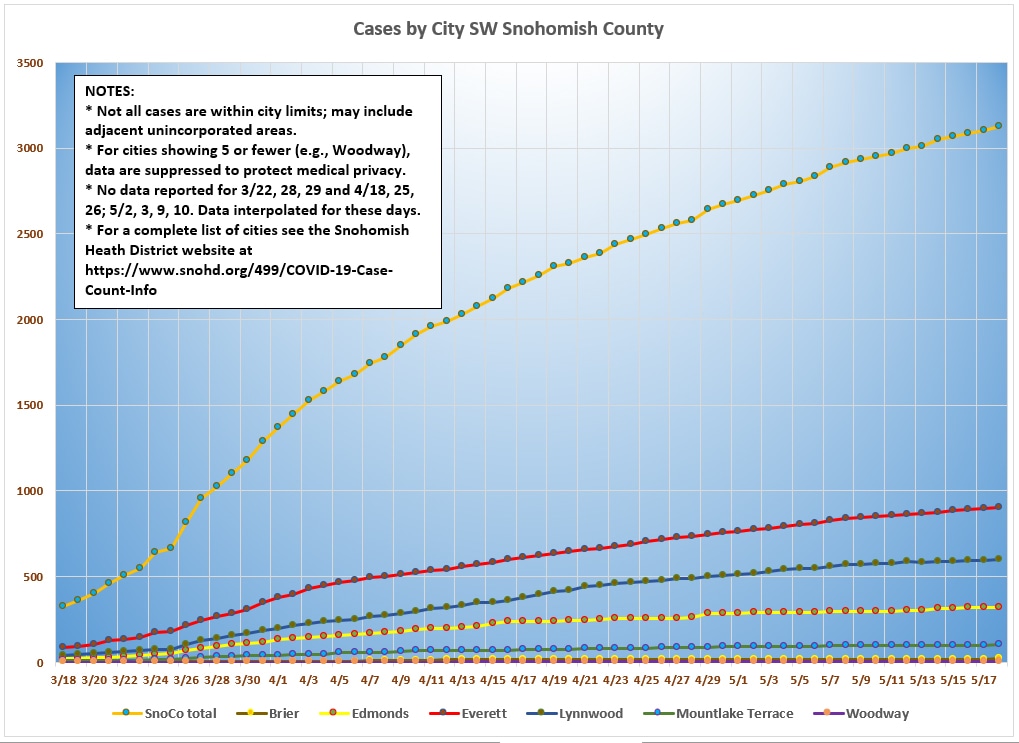 The Monday, May 18 data from the Snohomish Health District overall look encouraging, despite showing a slight uptick in resurgence of the virus in several of the metrics we track. We have also added three additional charts. The first displays the latest data on how people were exposed to and acquired the virus. The other two provide information on COVID-19 testing in Snohomish County, looking at cumulative totals, weekly totals and positive vs negative results. 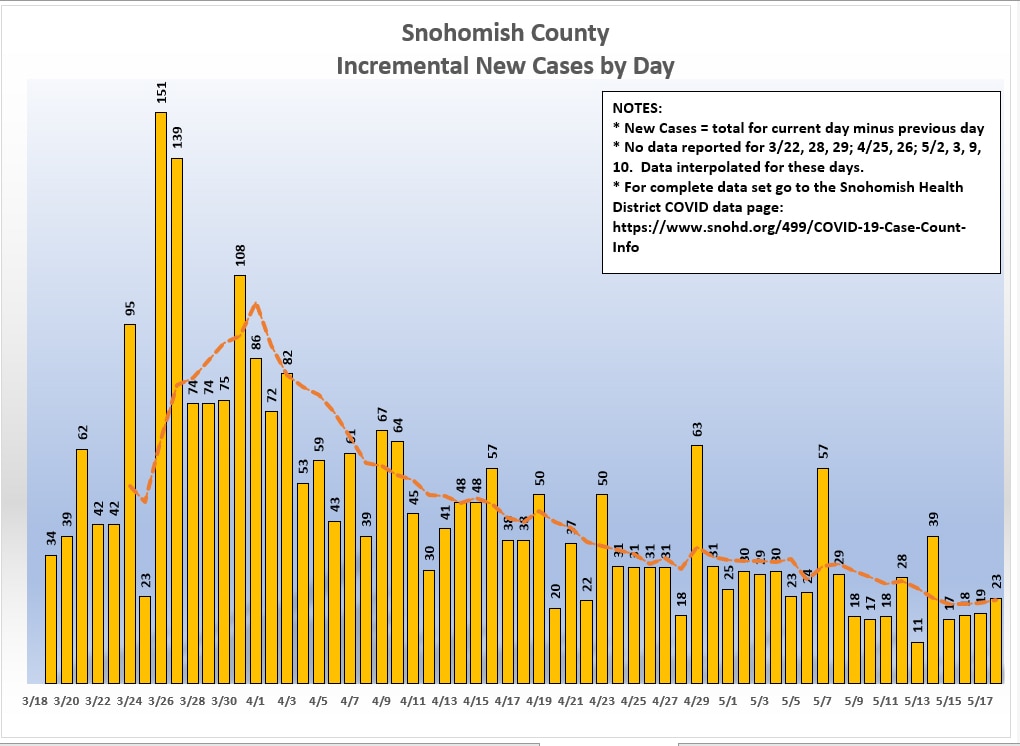 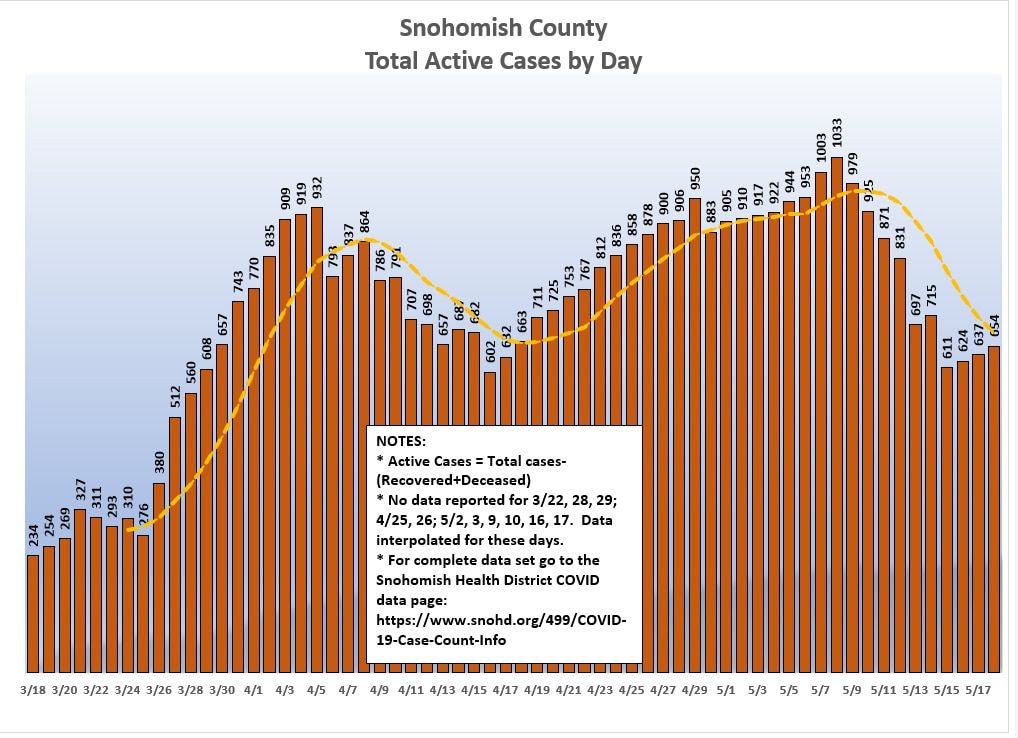 While 60 new cases (yellow chart) were added since Friday, bear in mind that this is spread over a three-day period, which keeps the rate of increase slightly below what we have experienced over the past two weeks. Also up, but only slightly, the number of active cases in the county (red chart) now stands at 654, an increase of 43 since Friday, but still well below the levels of the past month. 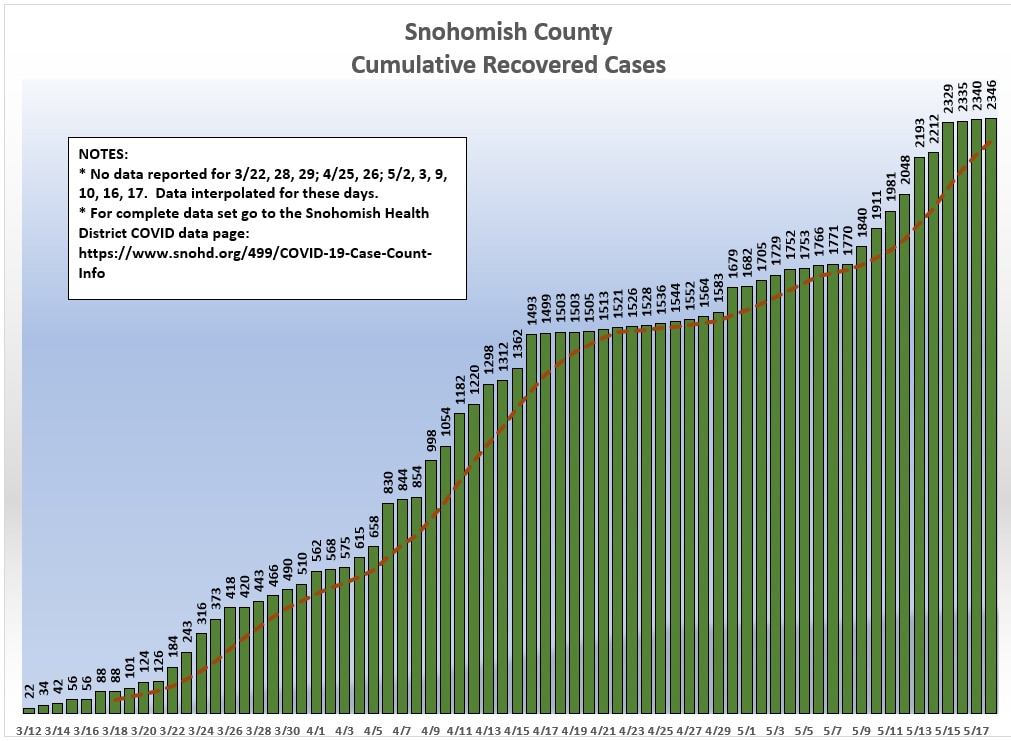 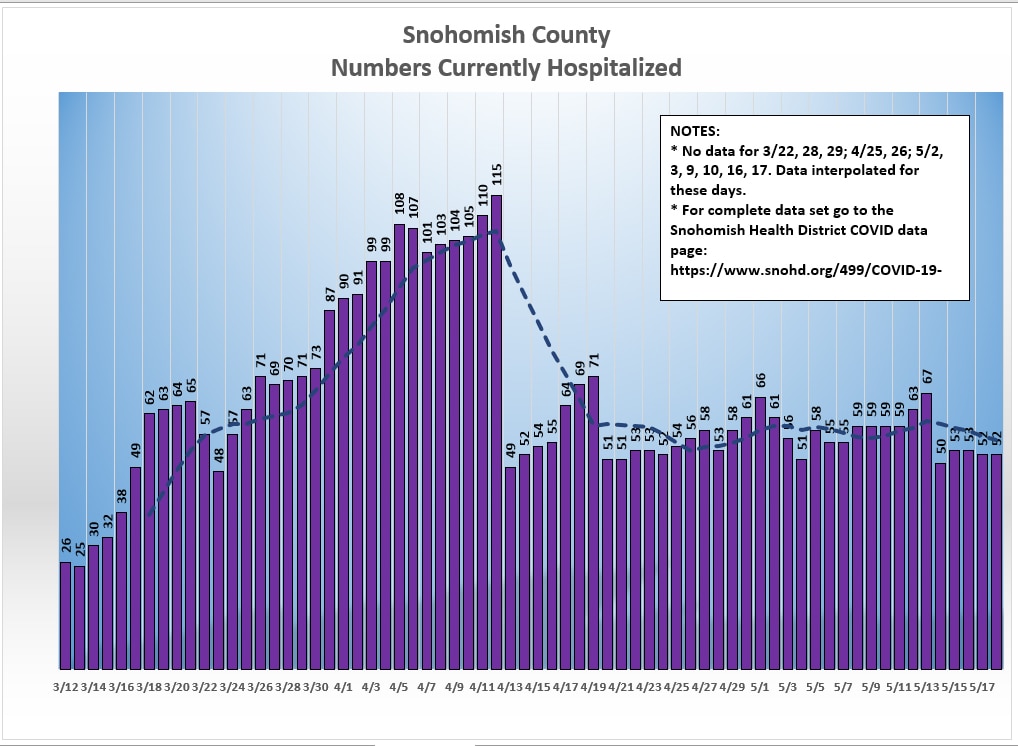 Cumulative recoveries (green chart) continues to inch upward, adding 17 to Friday’s count. Total recoveries over the full reporting period now stand at 2,346 Snohomish County residents who have kicked the COVID-19 virus. The number hospitalized with the virus (purple chart) remained fairly steady over the weekend, with 52 under hospital care as of Monday, the lowest over the past two weeks. 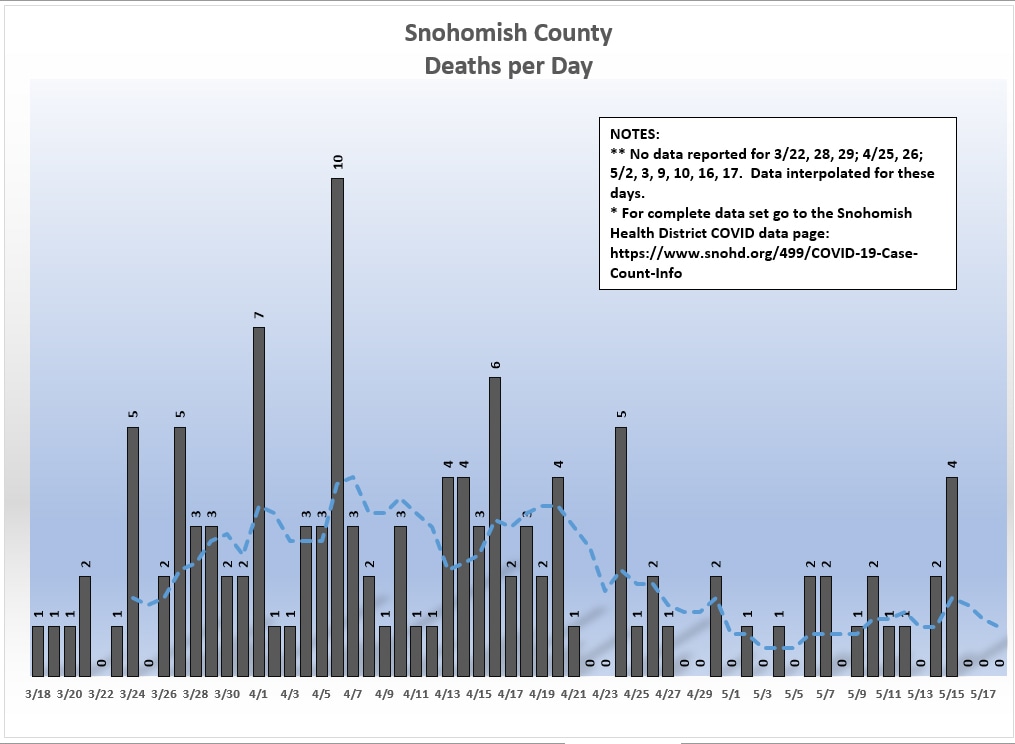 Without a doubt, the best news in Monday’s numbers is that not a single death was reported over the weekend from COVID-19. The total Snohomish County COVID-19 death toll over the reporting period now stands at 126, 4.03% of those infected.

Last week, the Snohomish Health District issued a statement on testing, which addresses questions about serologic vs antibody testing, the difficulties of reporting meaningful testing data, common misconceptions about testing and more. 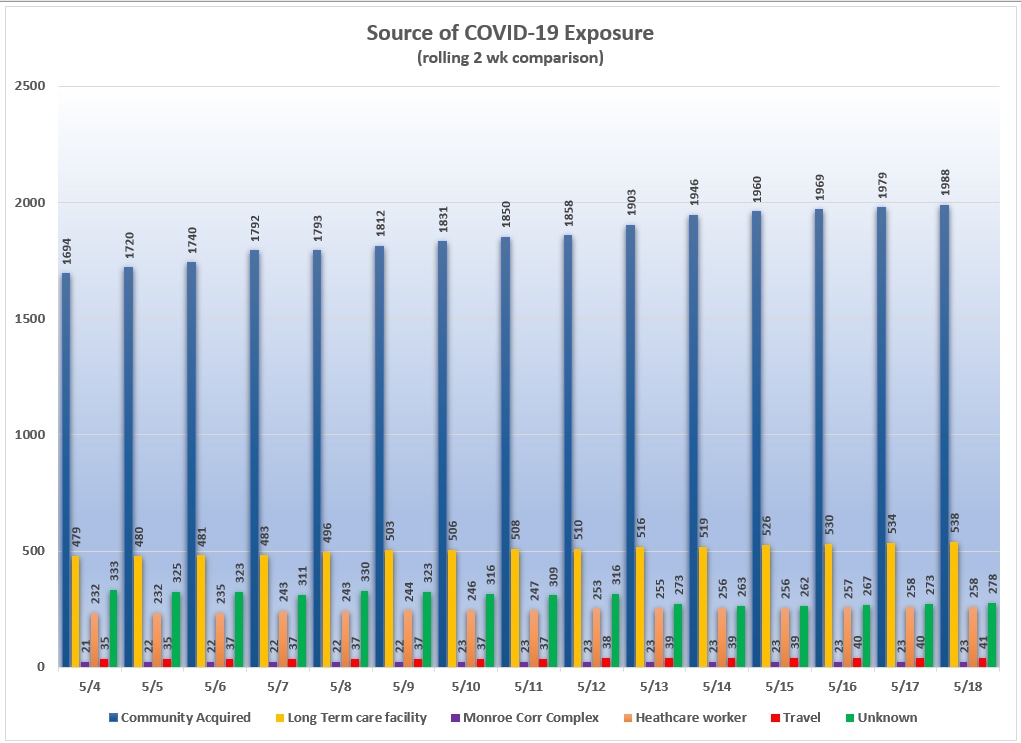 The first new chart displays information on how and where COVID victims acquired the virus. According to these data, community transmission (going to stores, gathering in groups, touching surfaces containing virus particles, etc.) is the overwhelming method of infection. The next most prevalent source is long-term care facilities, which primary affects seniors. 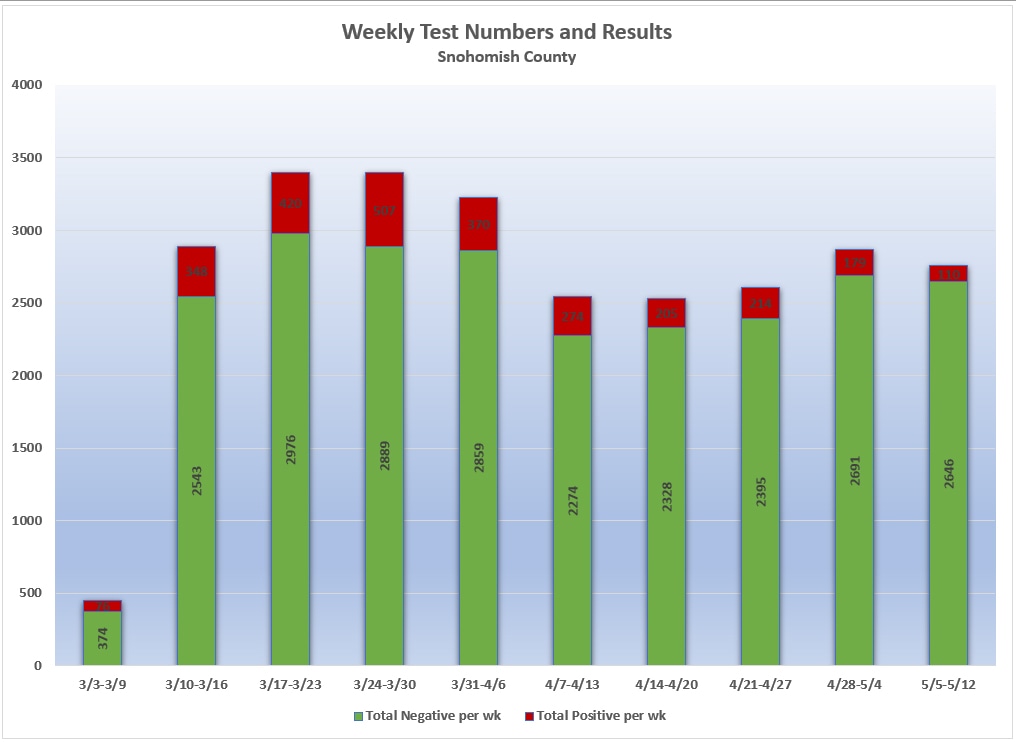 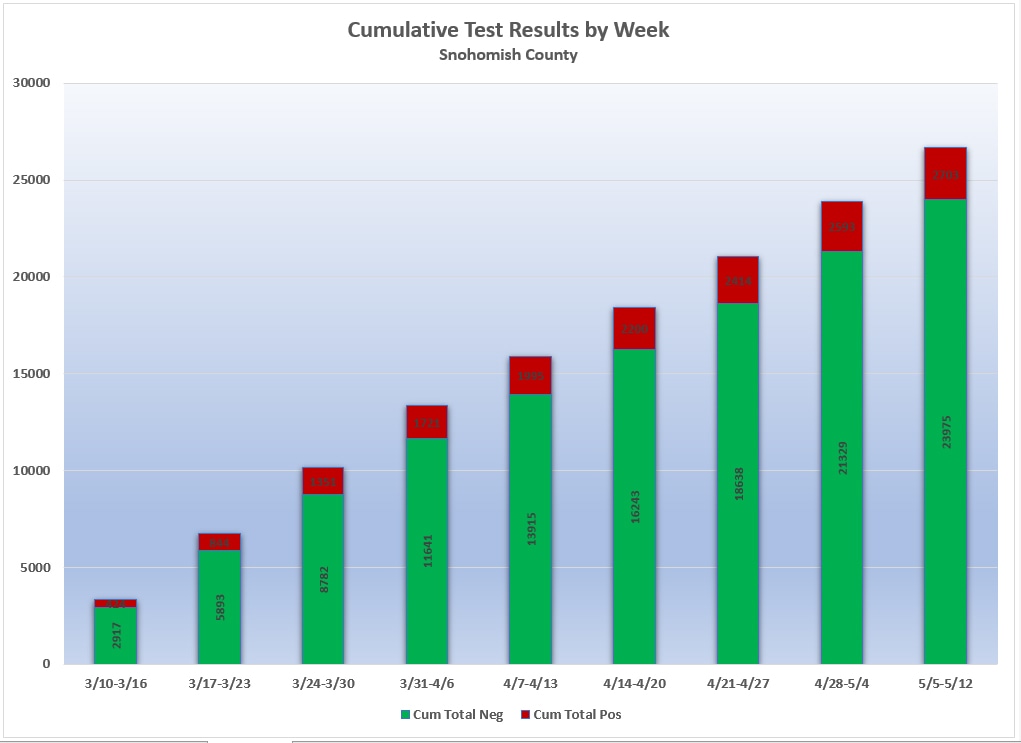 Testing figures are now being reported by the Snohomish Health District on a weekly basis, and our charts today reflect the data as reported on May 14.  The weekly chart shows a steady level of testing activity with more than 2,500 tests being performed daily. The cumulative testing chart also reflects a steady pace of testing activity. Note the overwhelming number of tests with negative results. According to the health district’s figures, 4% of the tests performed in Snohomish County to date have yielded positive results, and 26,588 total tests have been administered, a rate of 3.2% of the total county population of 822,000.

The health district has also resumed drive-up testing this week at sites in Stanwood and Marysville. We are in contact with the health district, and will report when these will be available in our communities.

Was your identity stolen for unemployment benefits? Lynnwood police advise what to do next

Inslee announces restart of all medical services in Washington