With Snohomish County officials voicing the possibility of joining the growing number of states and local jurisdictions that are back to more restrictive protocols in an effort to slow the COVID resurgence, this report provides a closer look at the local numbers in an effort to shed light on the reasoning behind this.

Drawing primarily from the Snohomish Health District’s latest COVID count report and weekly update, the following charts and tables provide a snapshot of the current situation with particular focus on our home communities (look for a similar overview for the state in our next report early next week).

One of the primary measures stoking concerns about reverting to Phase 1 reopening is our growing case count.  As illustrated below, the latest numbers show Snohomish County further slipping from the key Phase 2 criterion of maintaining a new infection rate of less than 25 new cases per 100,000 population over a two-week rolling period.  While we met this standard in early June, we have since backslid to 39 cases per 100,000 as of June 27. 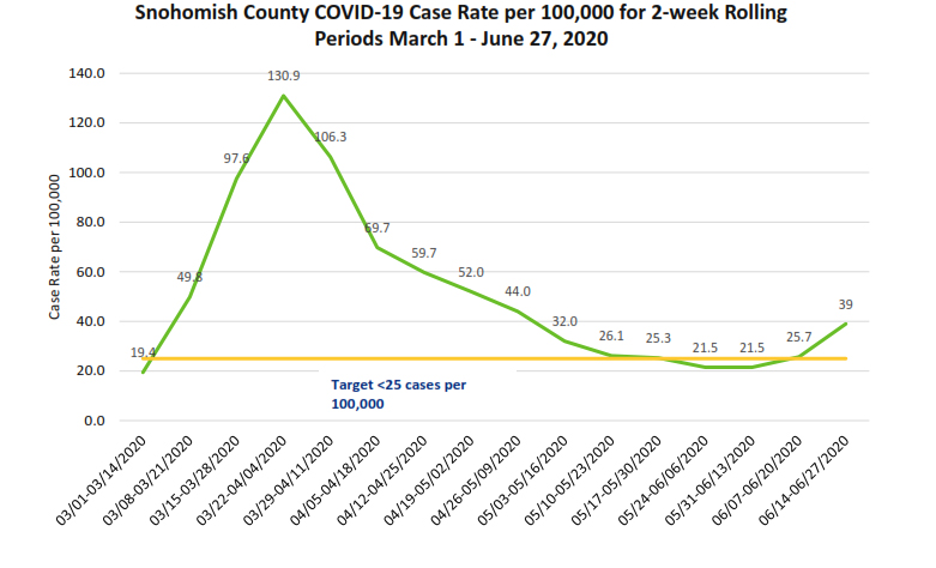 The next two summary count charts are taken from the Washington Department of Health COVID Dashboard and provide an overview of how Snohomish County’s numbers stack up against the those for the state as a whole. 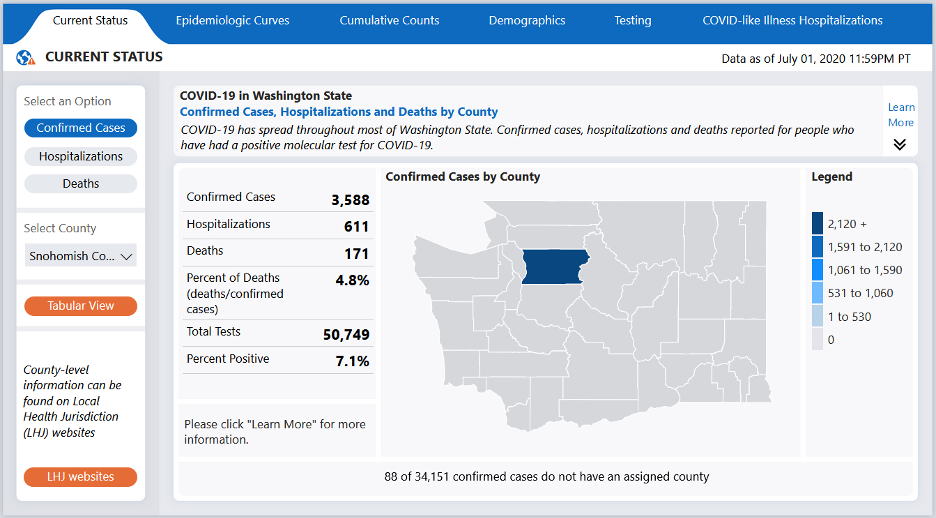 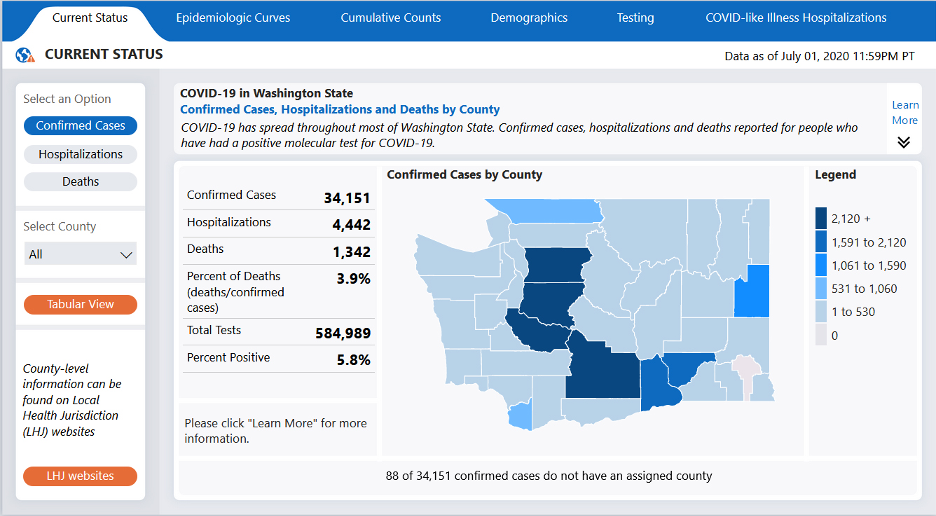 The situation at the local level is shown in the next chart from the Snohomish Health District’s most recent summary report. This bar chart details the pattern of when cases were reported in Snohomish County beginning in late January and going up to June 27.  The number at the top of each bar reflects the count for that day. The total Snohomish County case count (confirmed plus probable) through June 27 stands at 3,941. 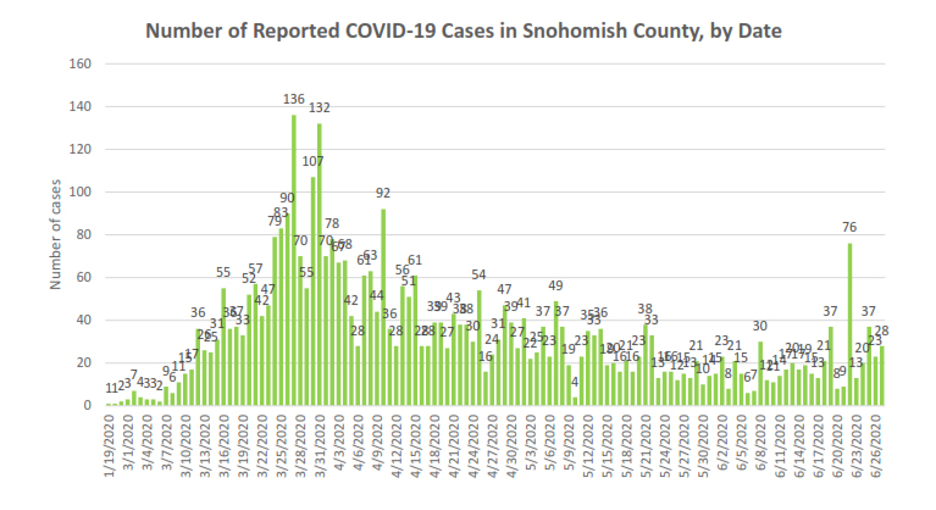 The next table shows the current status of these 3,941 cases. The good news is that the vast majority of COVID victims in our county have recovered from the virus.

As part of the testing and tracking efforts underway in the county, officials compile date to show how and where victims contracted the virus. Knowing this helps contact tracers follow the infection to its source.  Unfortunately, the largest group by far were exposed through community contact, a catch-all category reflecting those cases that can’t be tracked to an identifiable source.

So far death counts have not caught up with the case count increase, as the following chart illustrates. 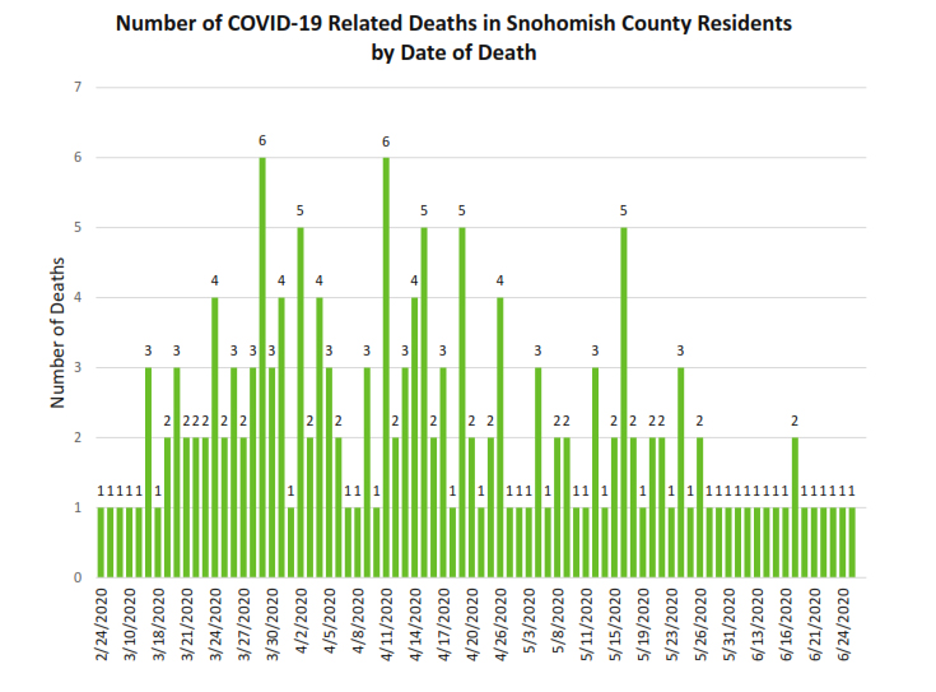 But comparing the demographic breakdown of case and death counts shows clearly that older populations continue to be hit disproportionately hard by the virus. 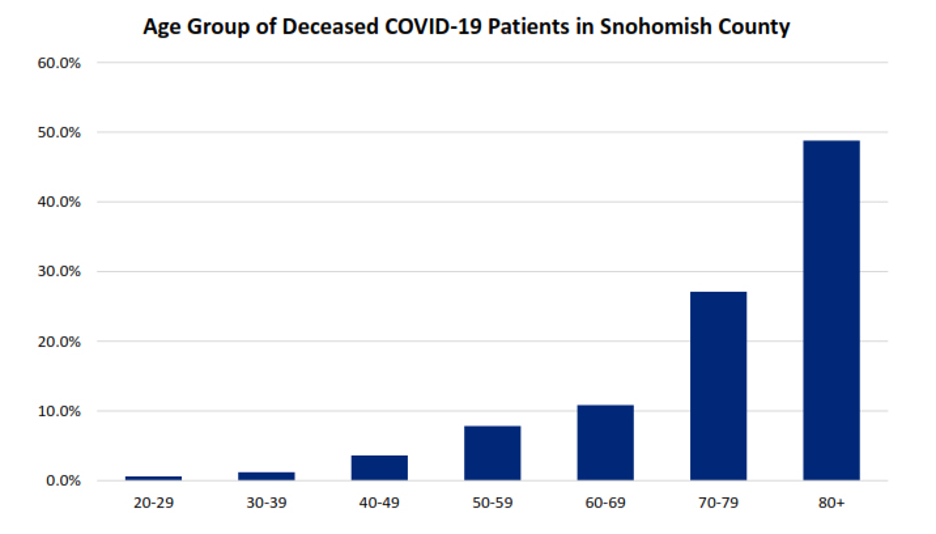 Finally, in response to reader requests, we have brought back the local numbers table, although with less detail than in our earlier reports, since some of the data we formerly used no longer being provided. This week’s table examines one-week case count changes in our home cities from June 27 through July 2, all of which are showing a lower percent increase than the county as a whole.