Despite the two-week decline in national new infection rates (rates were down 20%this week, compared to 11% the week before), as of this week 1 in every 13 Americans are infected with the virus. Experts are suggesting that the holiday surge is on the wane, but caution to say that it is still far too early to speculate whether the slowly growing number of vaccinated individuals could be part of the reason.

Even though vaccine supplies nationwide continue to outstrip demand and many states are forced to cancel appointment due to lack of doses, federal and state governments are gearing up their distribution infrastructures. On Monday, the Biden administration upped its goal from 1 million to 1.5 million shots per day and announced plans to open 100 new vaccination centers in the coming month; this despite an admission by new CDC head Dr. Rochelle Walensky that she “does not know” when more supplies of vaccine will be arriving.

The fast-evolving virus continues to mutate as it spreads, with several new strains now identified. Experts predict more variants are likely on the way or are already here and as yet unidentified.

The U.K. strain, the first to be identified, is now the predominant form in the U.K., which is now in its third week of lockdown. The U.K. variant continues to spread in the U.S., with confirmed cases now in 26 U.S. states – including Washington – and according to U.S. Surgeon General nominee Dr. Vivek Murthy is expected to “spread widely” and become the predominant strain in the U.S. before mid-year.  Latest word from the experts is that this strain is more contagious, and produces more severe symptoms (and hence is more deadly).

In addition to the U.K. variant, the CDC is currently tracking three other strains — one originating in South Africa, another in Brazil and a third that appeared in California. On Monday, the first U.S. appearance of the Brazilian strain was confirmed in a patient in Minnesota who had recently returned from Brazil.  Both the U.K. and South African variants are already here.

This has vaccine manufacturers playing catch-up, testing the effectiveness of the current vaccines against the new strains. Early indications are that the vaccine continues to be effective, but some data suggest that one strain – the South African – might be at least somewhat resistant. This has prompted one manufacturer – Moderna – to explore developing a booster specifically targeting this new variant.

Here in Washington, Gov. Jay Inslee Monday announced the latest progress toward the state’s goal of administering 45,000 vaccine doses a day. As of Monday, the state’s current seven-day rolling average was 23,960 doses administered, but more recent daily numbers show “around 40,000 doses” administered on Monday alone. Washington also officially passed 500,000 vaccine doses administered and reported. That is 57.4% of the doses provided to the state by the federal government. Read more in the governor’s press release here.

In a Tuesday press conference, Snohomish County officials announced plans for a fourth vaccination site, location to be determined, in addition to the currently operating clinics at Paine Field, Edmonds College and the Monroe State Fairgrounds. You can check on availability for the drive-thru sites here: snohomish-county-coronavirus-response-snoco-gis.hub.arcgis.com/pages/covid-19-vaccine.

Use the state’s phase finder tool at http://findyourphasewa.org to determine your eligibility to be vaccinated. Once you become eligible, appointments at the various clinics can be set up at the appointment booking website.

But despite efforts to increase availability, people who try to set up appointments continue to experience difficulties as many sites are booked out. As new clinics and vaccination sites open, the hope is all Washingtonians who want to be vaccinated can do so by mid-year. Officials continue to advise people to be patient as they scramble to add more clinics and work to increase supplies.

Check this report’s Washington State Situation section below to see details of our progress with vaccinations.

In other developments, the new public health measures outlined in Gov. Inslee’s Healthy Washington plan continue. The plan divides the state into multi-county regions, all of which were initially in Phase 1, the most restrictive category. Unlike the former Safe Start program, these groups do not need to apply to advance to a less restrictive stage – this is now determined by data collected and compiled by the State Department of Health. As of this week, no region qualified to move to phase 2. Details of how the guidelines apply to various businesses and other groups are available here.  See more in the Washington State Situation section of this report below.

To help you, our readers, stay updated on the continuing battle with the pandemic, here once again are the latest numbers, charts, and statistics from the world to our own backyards.

This week’s global COVID case count as reported by Johns Hopkins University shows more than 4 million additional cases, pushing the count since the start of the pandemic a year ago to just shy of the 100 million mark with almost 100,000 new COVID deaths. The United States case count dropped again this week with 1.2 million new cases added, down from 1.5 million last week. The U.S. total now stands at more than 25.3 million since the start of the pandemic, with 422,000 deaths. Despite the second week of slowing increases, the U.S. continues to lead the world in both these measures. 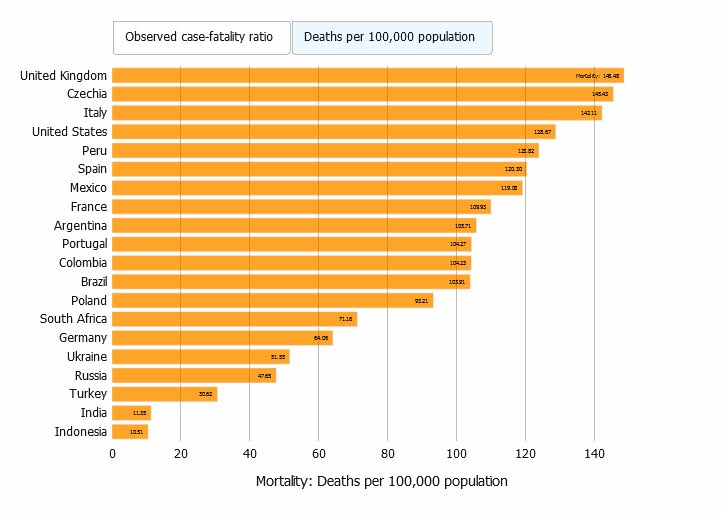 Overall 90-day trends in the United States are summarized in the charts below from the COVID Tracking Project. Note the recent encouraging declines in new cases, hospitalizations and deaths.

Statewide the numbers have leveled off slightly this week. The most recent (Jan. 24) state overview from the Washington Department of Health shows the confirmed case count at 288,948, a gain of 11,500 from last week. Deaths now stand at 4,148, gaining more than 200 from last week. 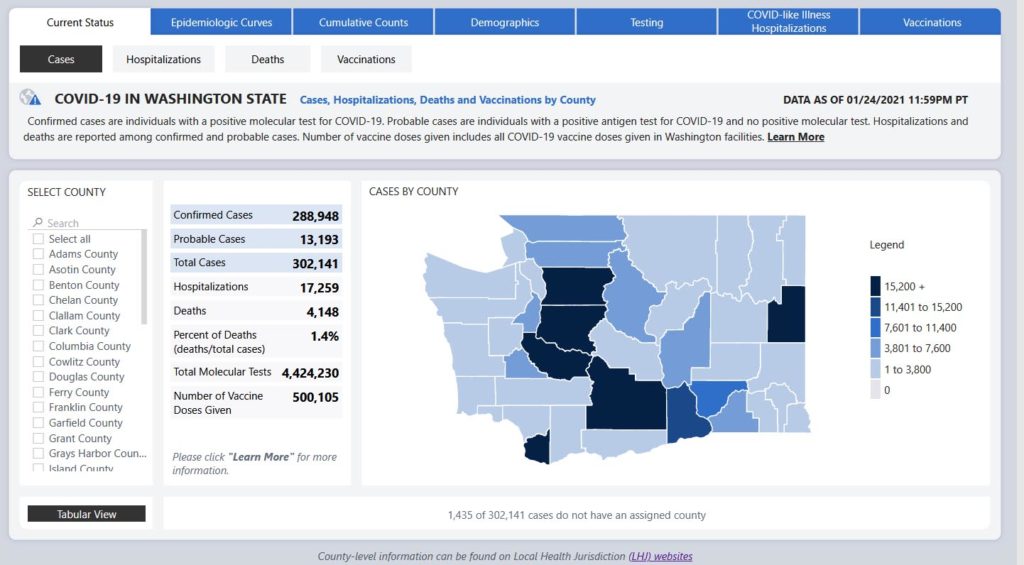 The statewide daily new case count as of Jan. 24 continues to back off from the Dec. 11 high of 4,111 as shown in this chart from DOH, and continues the trend begun last week suggesting we are coming out of the Christmas/New Year’s post-holiday surge. Note that here – as with all DOH charts – the grey bars indicate data that are incomplete and still being tabulated. 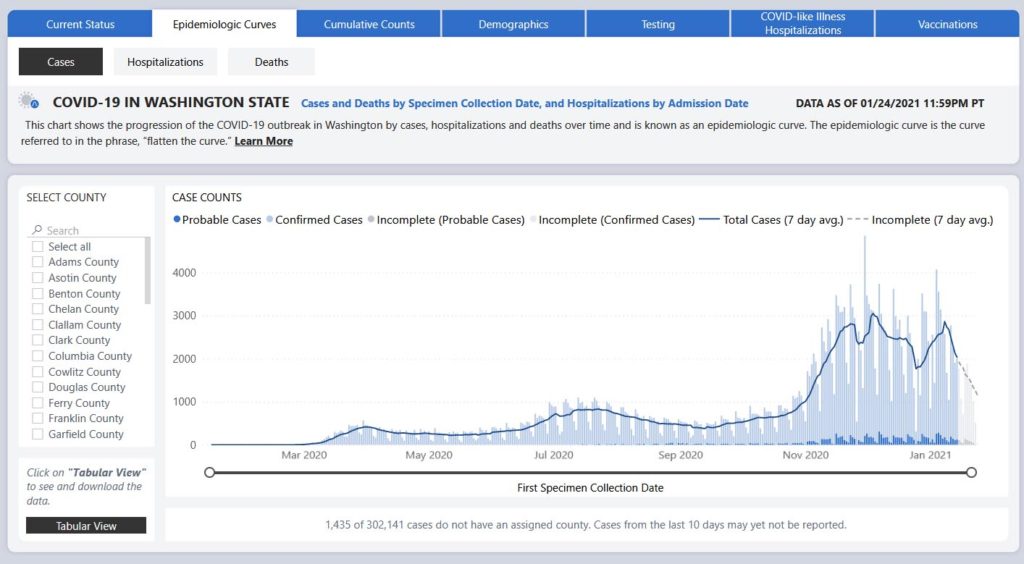 The Jan. 24 case rate of 431.5 (cases per 100K population, two-week rolling average) is up slightly due to it being an average of the previous 14 days (which includes the now-waning holiday surge) rather than a daily snapshot. It continues to remain well above the state goal of 25. 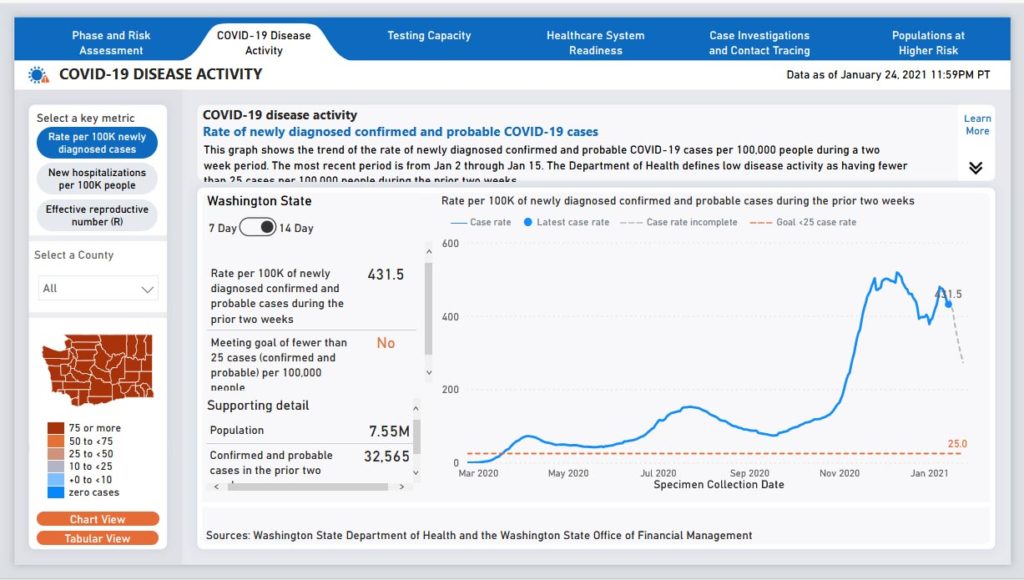 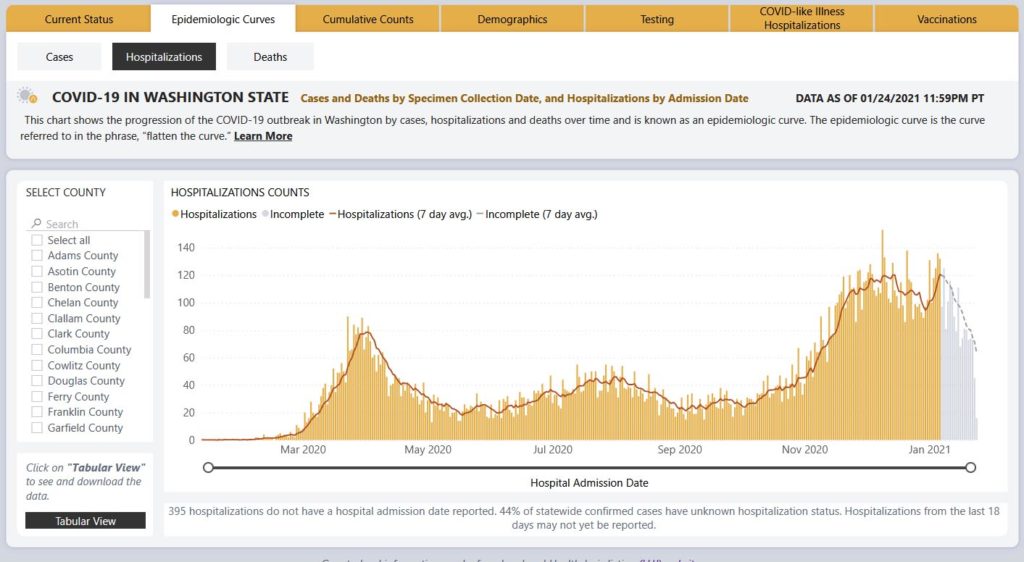 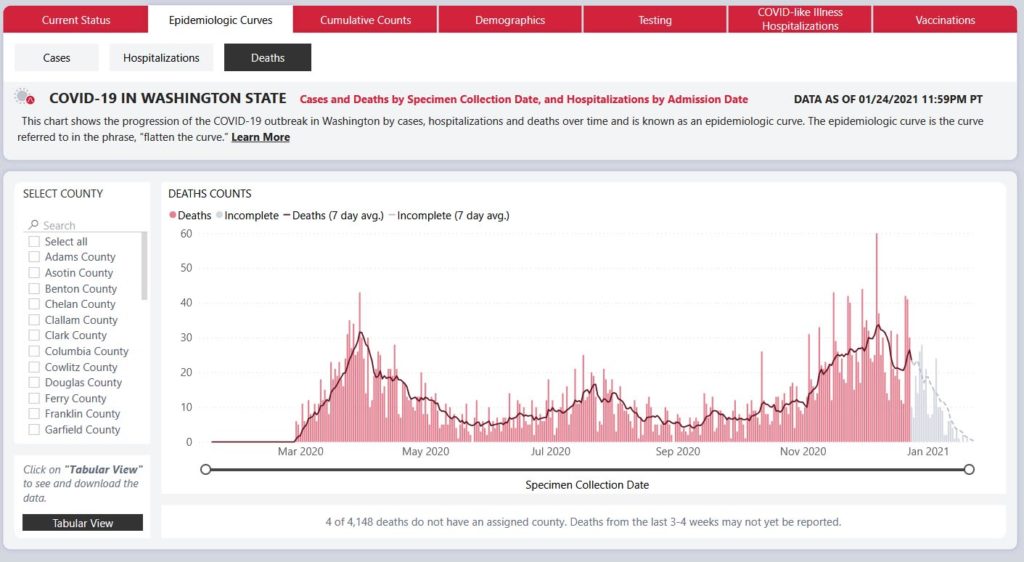 Testing activity in Washington state continues to decline with the passing of the holidays and the high demand for tests they brought (note the bump in December). Also, the rapid ramp-up in vaccination activity is pulling resources from testing operations. The second chart shows the percentage of positive test results dropping to 11.1, from 17.7 last week. Note that these numbers are for molecular (nose swab) tests and do not include blood serum (antibody) tests. 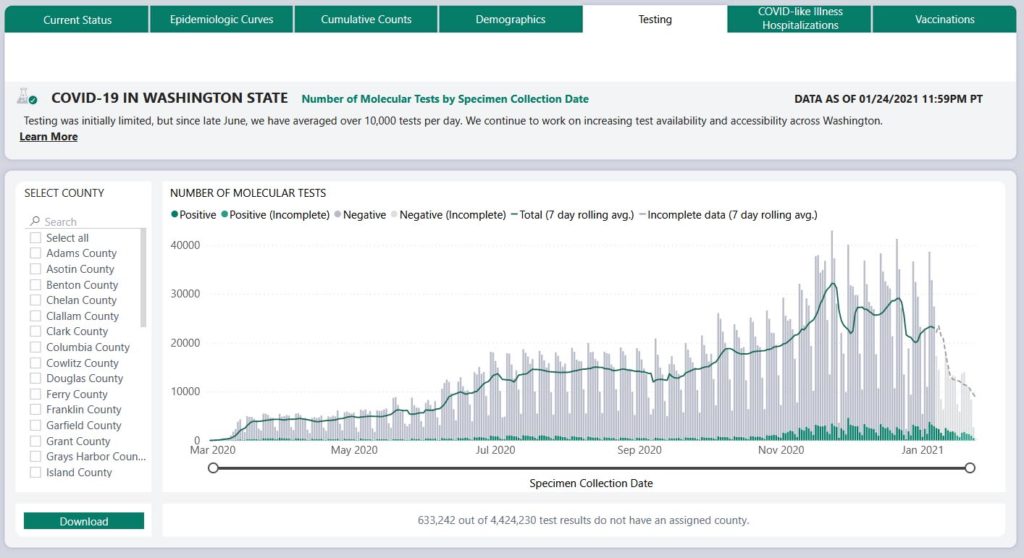 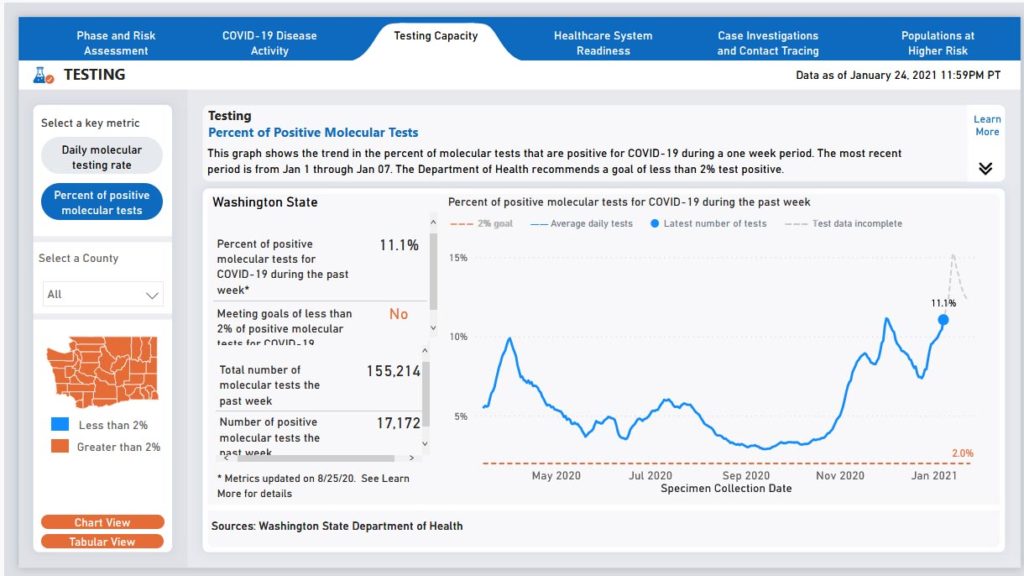 Four metrics are considered in determining the phase for each region:

Snohomish County is grouped into the Puget Sound region along with King and Pierce counties.

The table below shows how the various regions currently stack up. 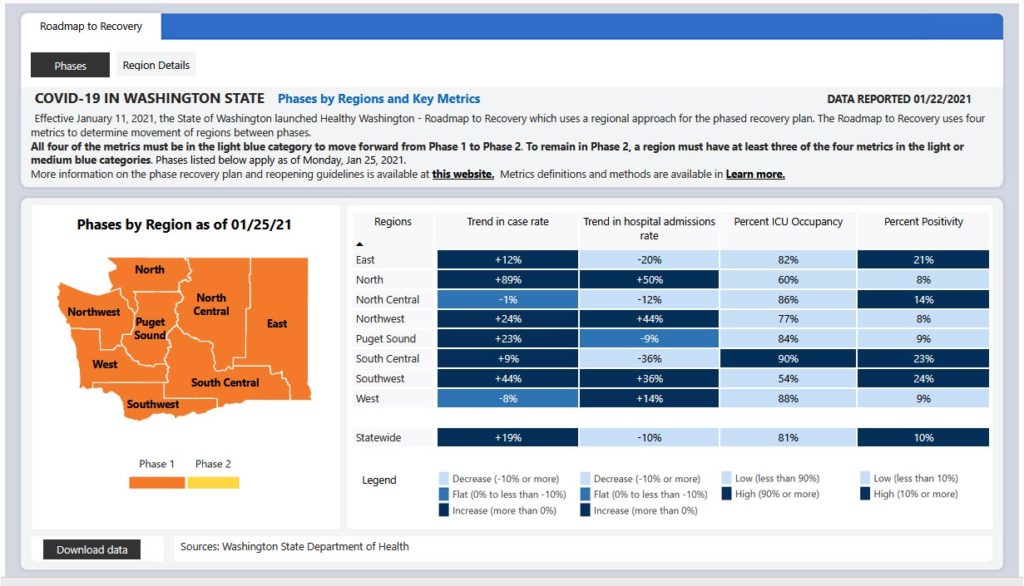 Vaccination activity continues to ramp up as Washington works to overcome initial startup challenges. This week’s seven-day average jumped to 23,964 doses per day, up almost 10,000 from last week’s report. Statewide more than half a million doses have been administered to date, or 5.55% of Washington’s 7.7 million population. 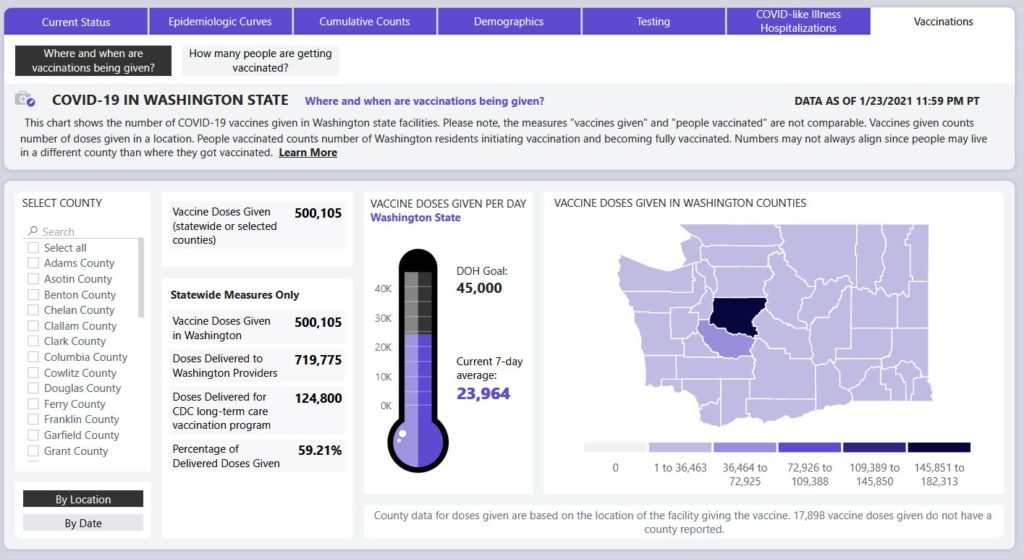 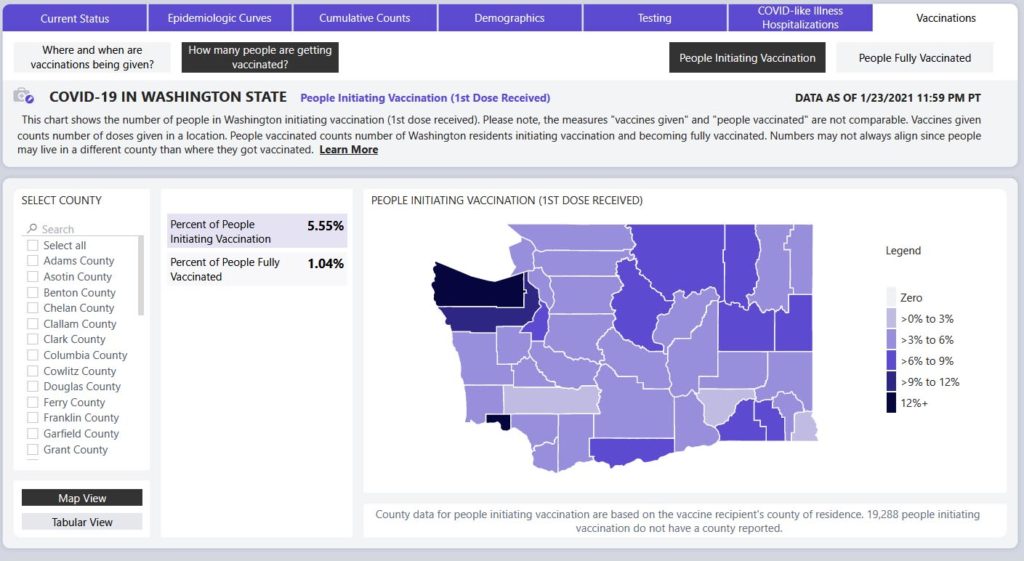 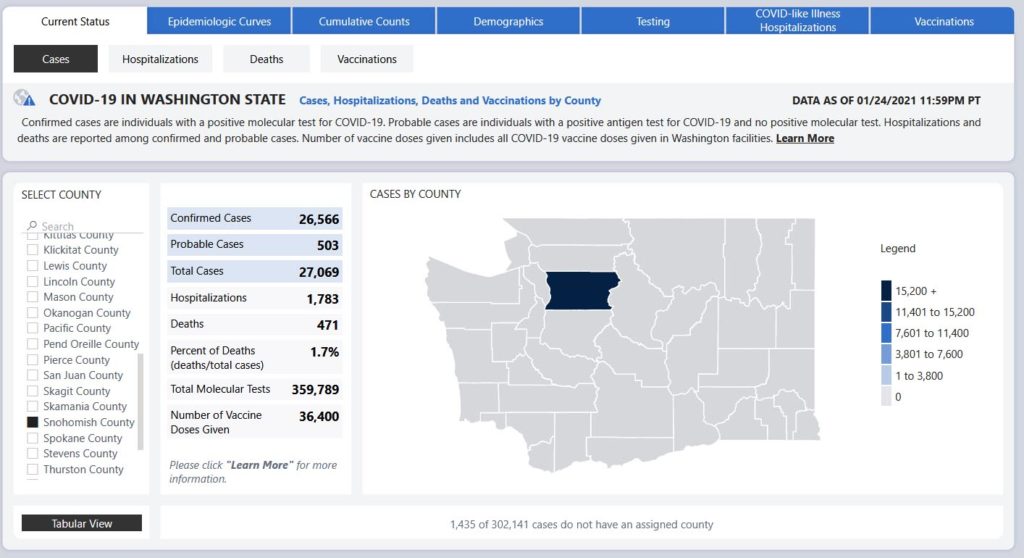 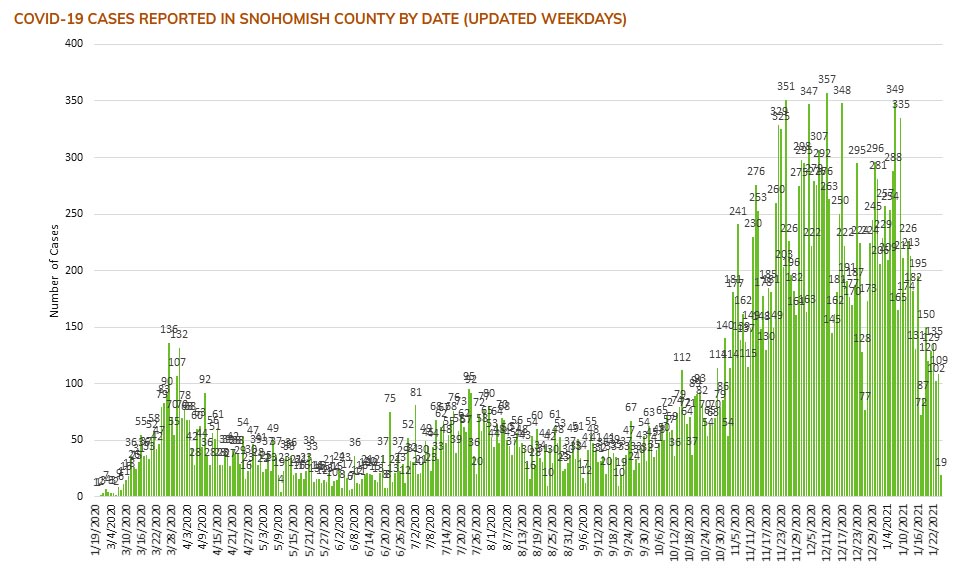 Trends in critical county measures through Jan. 19 show active cases continuing to decline, while the overall case count begins to level off. 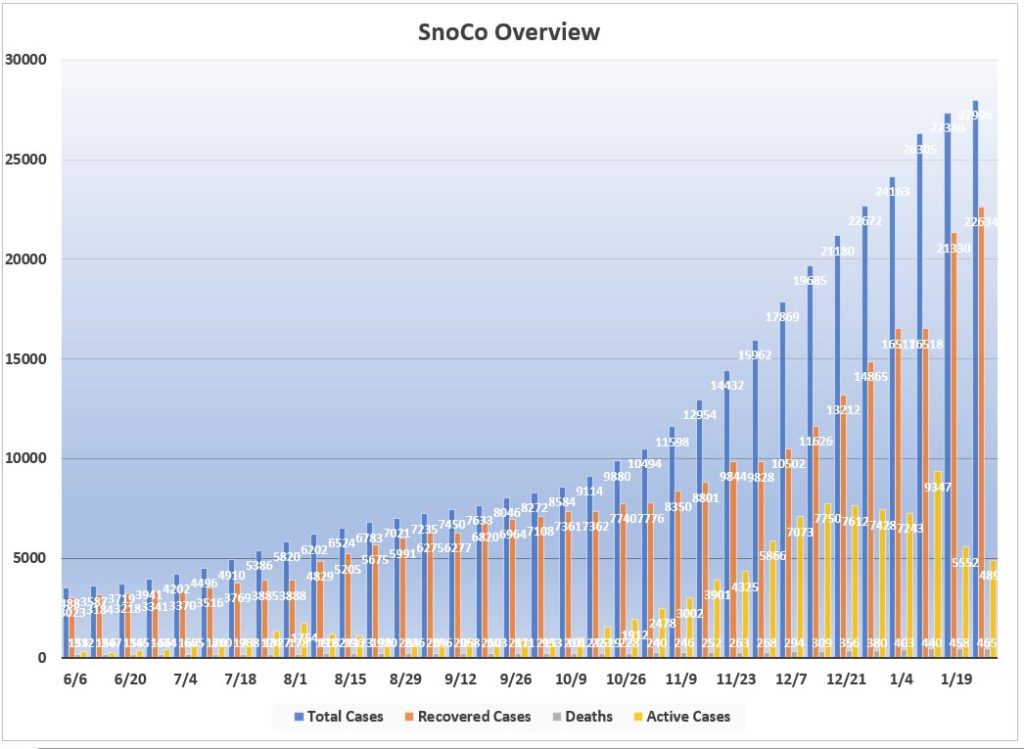 The two-week rolling average case rate per 100,000 from the Snohomish Health District is down significantly from the past week, showing 253 new cases per 100K a drop of 123 from last week. While this reflects the overall drop in new cases nationwide and statewide, bear in mind that this number is a rolling average based on the previous two weeks of data, not a single-day snapshot. 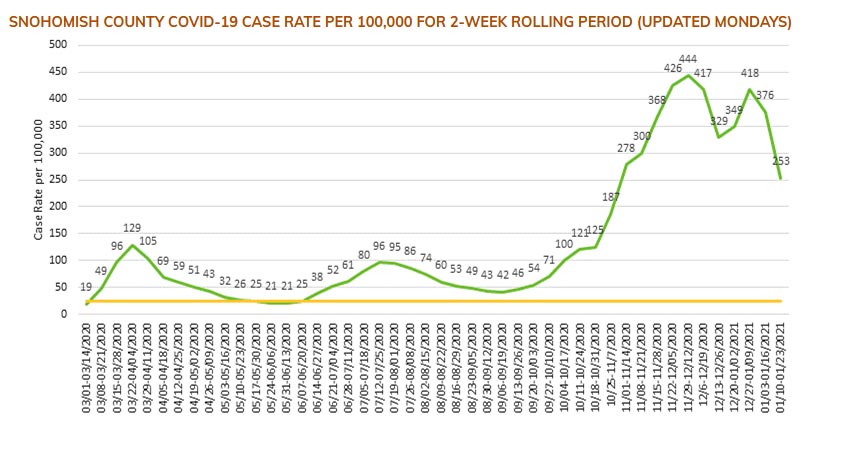 The mortality trend for Snohomish County continues to level off from the steep increases of last month. 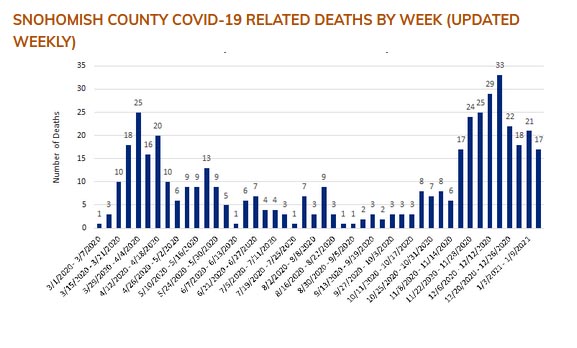 Note: This week’s data for total cases and recovered cases are taken from the most recent Snohomish Health District Snapshots and Reports webpage. While these two counts are reported weekly, death numbers are reported biweekly and because this is an off week do not show in these charts and table.  For clarity we have used the previous week’s death figures as placeholders, and will update with new data in our next report.

Critical metrics (total cases, recovered cases, deaths, and active cases) for our home cities show a falling rate of increase for total cases, accompanied by a marked upswing in recoveries and a decrease in active cases. 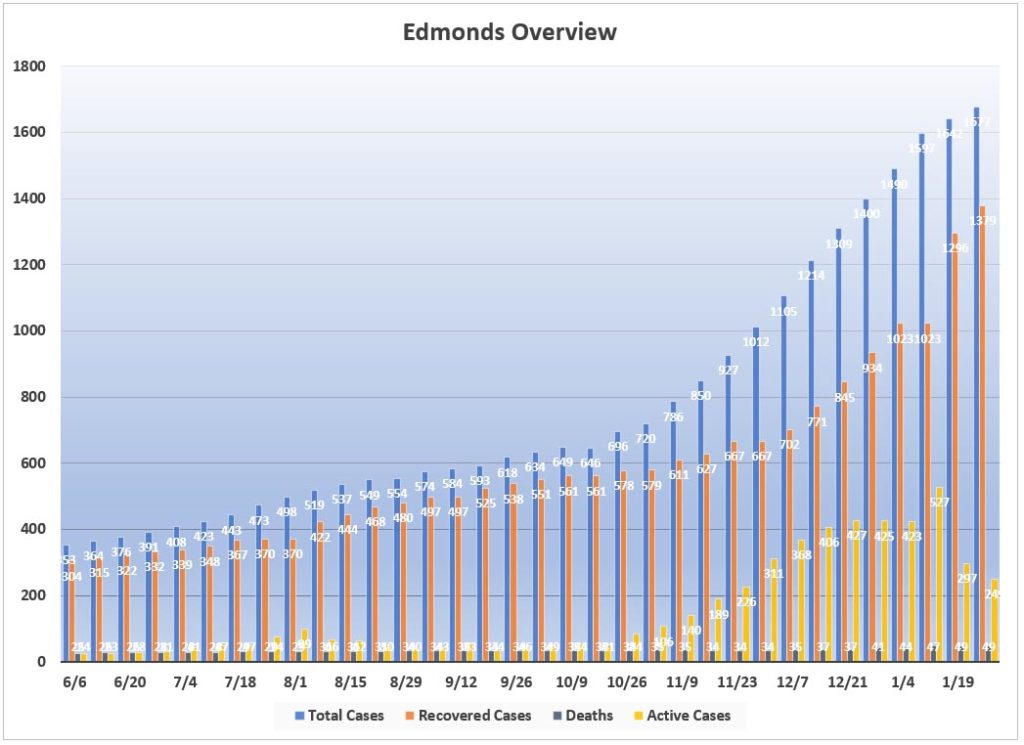 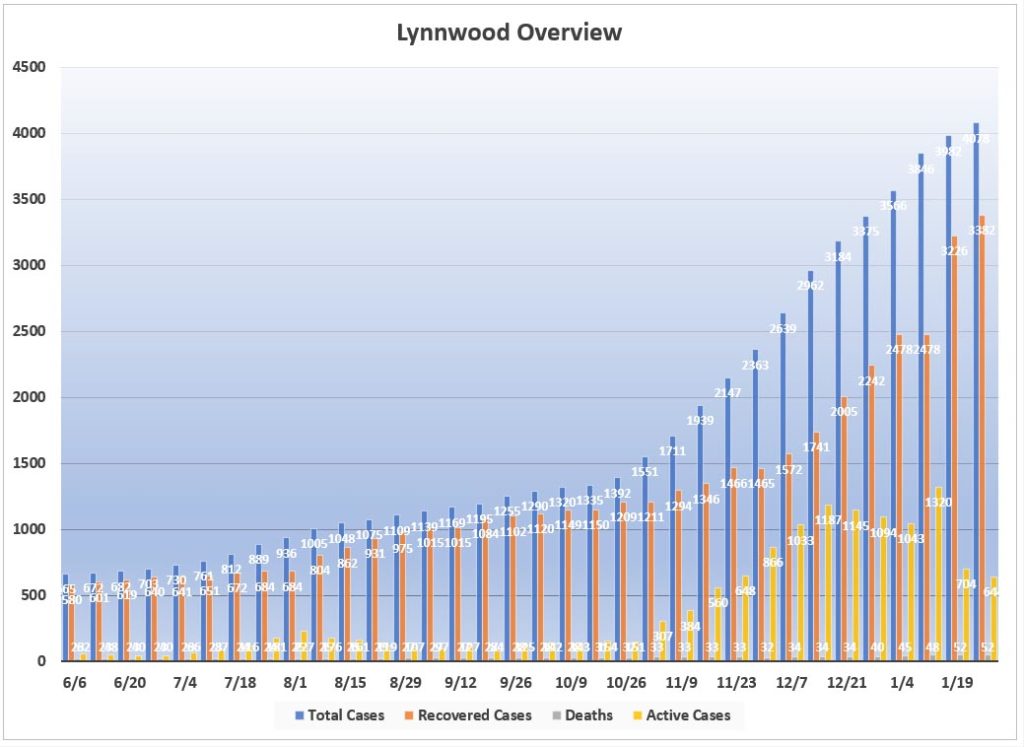 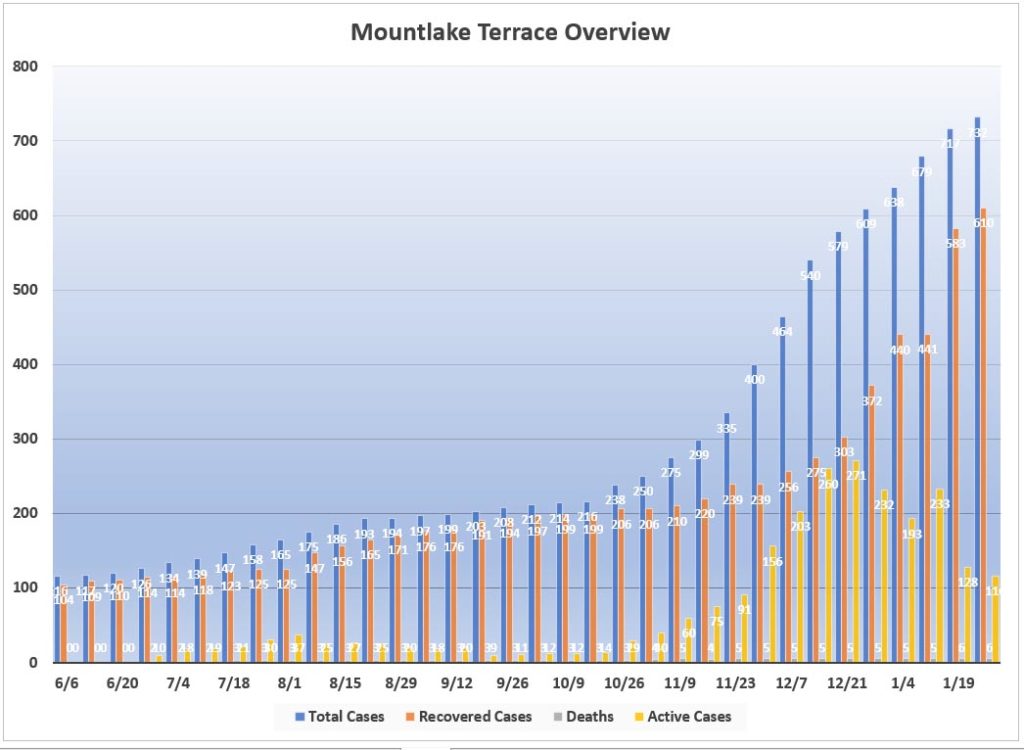 The local numbers summary as of Jan. 25 shows a marked decrease in active COVID cases at all levels (right-hand column), driven by the combination of slowly declining infection rates and an upswing in recoveries.  Note again that because death numbers for individual cities are now reported biweekly, we have used last week’s figures as placeholders, hence the zero change in death numbers this week. We will update these number in next week’s report.