The best: Shipments of the long-awaited Pfizer coronavirus vaccine have arrived on our doorstep and vaccinations of Washington State’s front-line health care workers have begun. With FDA approval expected later this week of the second vaccine from Moderna, the U.S. stands poised on the brink of what promises to be a history-making effort to turn the tide, giving hope to thousands.

The worst: The coronavirus pandemic continues its fall surge, setting new infection, hospitalization and death records, and ensuring that despite the vaccine this “winter of our discontent” remains upon us with a vengeance, as experts agree, at least in the short term, that things will get worse before they get better.

According to the COVID Tracking Project, a record 110,549 U.S. patients were hospitalized with COVID-19 on Monday, with health officials predicting this will inevitably lead to more deaths over the Christmas and New Year’s holidays.

And while cargo planes packed with doses of the vaccine are being sent to all corners of the country, it is clear that limited quantities mean that many will have to wait for months for that shot in the arm.

According to the Washington Department of Health, the state can “expect to receive 62,400 doses of vaccine this week and 222,000 by late December. The first distribution will go to 17 sites across 13 counties. First in line are people in Phase 1a, which includes high-risk workers in health care settings, high-risk first responders, and patients and staff of long-term care facilities. The state health department estimates that 500,000 people in Washington will be eligible for the vaccine in phase 1a (read more about phase 1a distribution here).

The Snohomish Health District has a plan in place and is poised to begin vaccinations this week.

“We’ve all been planning and preparing for vaccine distribution here in Snohomish County since late-July,” said Dr. Chris Spitters, Health Officer for the Snohomish Health District. “There will likely be hiccups as we embark on a vaccination effort of this scale and complexity, but I want to assure you that partners across Snohomish County are fully engaged and prepared to rise to the challenge.”

Spitters went on to caution that while an exciting step, it will take time before distribution and supplies are able to reach the broader community.  He added that the vaccination effort will roll out over the coming six to nine months, with substantial benefits likely not being felt “until the latter part of 2021.”

But vaccines will make little impact on what’s already happening: a devastating season that continues to set record-high deaths, hospitalizations and new cases.  Health officials nationwide warn that this winter we should brace for the darkest days yet, while they continue to implore the public to not let up on masking, social distancing, and limiting group gatherings.

“Even though it may not be convenient, we need to prepare to wear masks for many more months,” says Kathy Lofy, state health officer at DOH. “COVID-19 is mostly spread by droplets, and masks help us keep those droplets to ourselves and help us avoid breathing in others’ droplets. Wearing masks can decrease the spread of COVID-19, and when we combine that with the effect of the vaccine, we could see a drastic drop in the spread of the virus.”

Lofy adds, “There’s still a lot we don’t know about the vaccines. We don’t know how many people will be vaccinated statewide or when vaccine will be widely available. We also don’t know how long the vaccine’s protection will last. Until we have more data around those crucial components, masks, distancing and handwashing will continue to be crucial pieces of our disease prevention strategy.”

Bottom line: borrowing the words of Winston Churchill, the start of vaccinations does not mean the beginning of the end – that will happen when the numbers start going down — but it does mark the end of the beginning.

To help you, our readers, navigate this sea of information and sort this out for yourselves, here once again are the latest numbers, charts, and statistics from the world to our own backyards.

This week’s global COVID case count shows more than 73 million cases since the start of the pandemic, 5 million more than the week before (see our earlier reports from Dec. 8 and  Nov. 30 for comparison).  The United States added more than a million new cases in the past 7 days surpassing the 16.5 million mark and doubling last week’s half million gain, as we continue to lead the world in overall number of cases since the pandemic began. Worldwide deaths have surpassed 1.63 million, with the U.S. (now at 298,507 deaths) comprising a disproportionate 18% of the global death total while accounting for 4.25% of the world population (331 million vs 7.8 billion).

The most recent tabular display of the top 10 nations from the World Health Organization shows similar numbers.  Note that the small discrepancies of these with the Johns Hopkins data are due to the updates being taken in different time zones (WHO is based in Europe, and due to time differences the numbers are approximately 10 hours earlier than Johns Hopkins), a testament to how quickly the infection is claiming new victims. 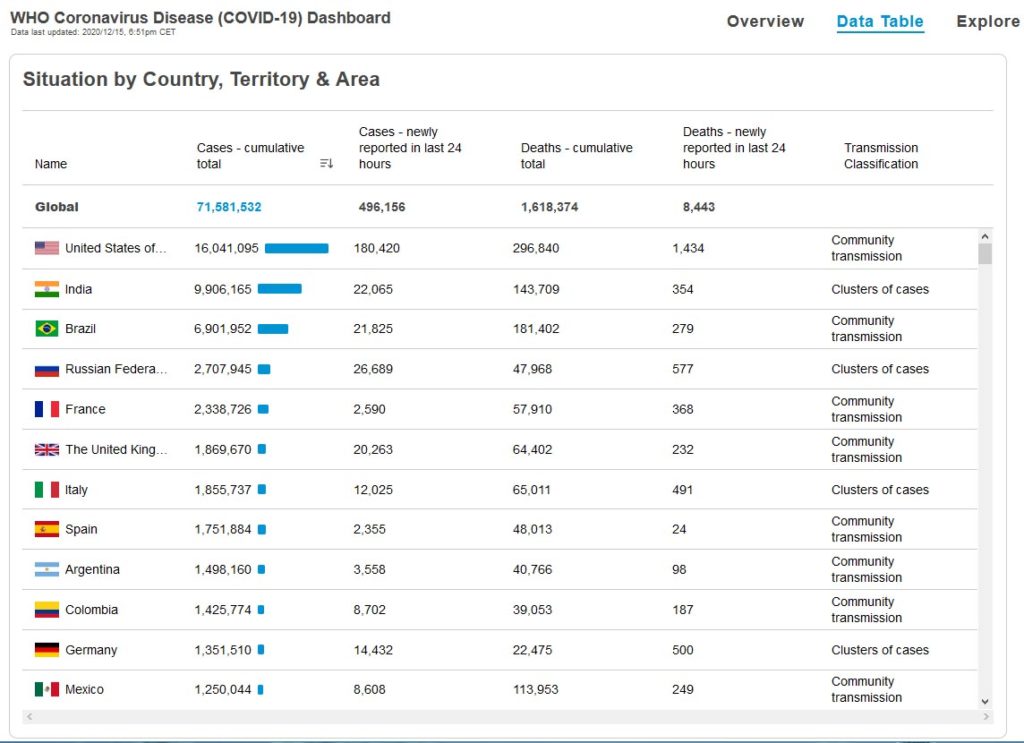 While the U.S. leads the world in overall case numbers, when the numbers are viewed as cases per capita (cases per 1 million population in this case) the U.S. jumps to 9th place from 12th last week.  Note that all these nations comprise much smaller samples, so while statistically these countries may show a higher per capita rate, the small sample size makes comparisons with U.S. dubious at best.  See the complete interactive table where you can rank countries by any of the various metrics here. 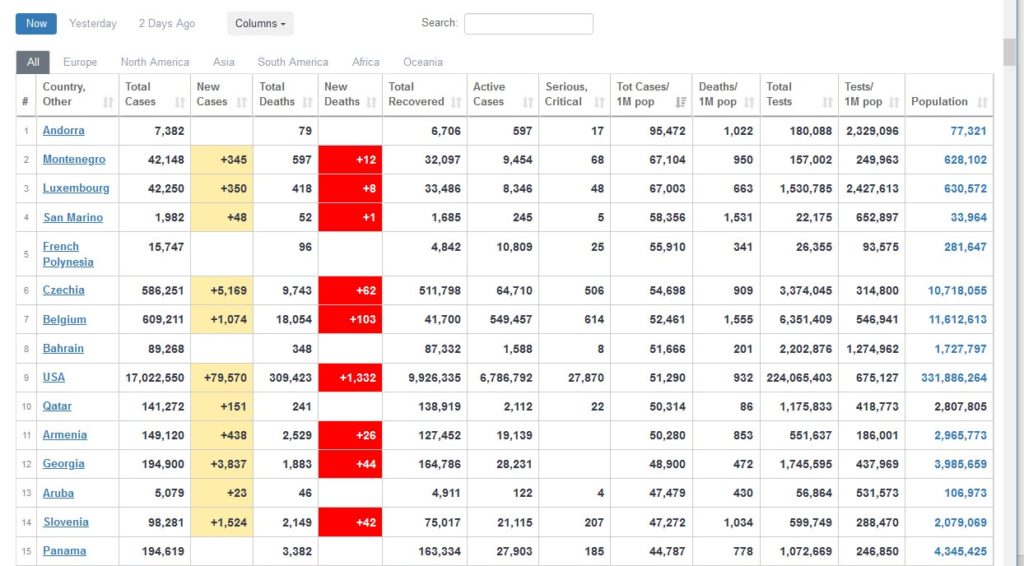 The U.S. climbed sixth to fifth place this week in COVID deaths per 100,000 population, while at the same time reflecting the worldwide trend of steady increases. This week the U.S. hit a new high of 91.84 COVID deaths per 100K compared to 86.71 last week and 81.57 the week before. (Mortality chart from Johns Hopkins University). 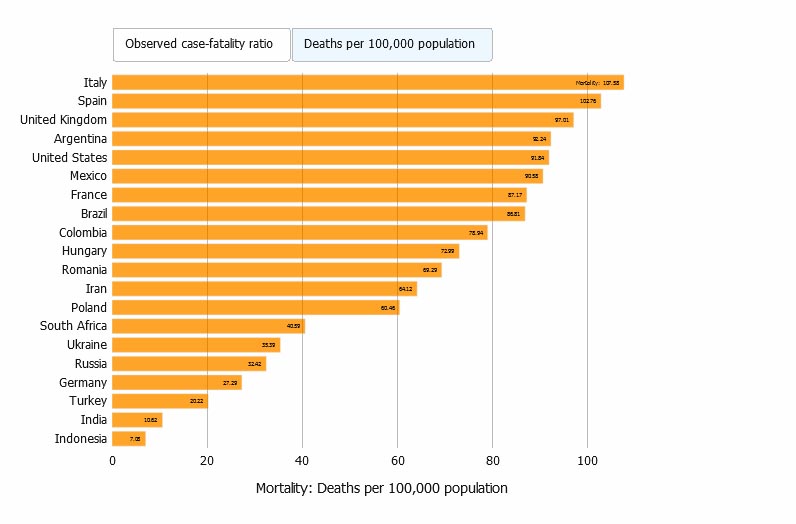 Overall trends in the United States since April 1 are summarized in the charts below from the COVID Tracking Project. Note that for each metric, this week saw new seven-day average records. 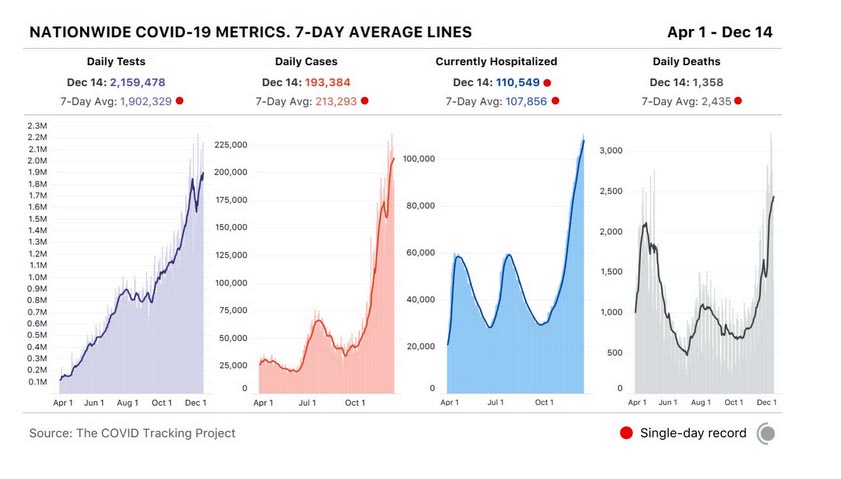 The DOH continues to clean up its data files, and as this work is ongoing some data reports are incomplete and/or based on older assumptions. The DOH has issued the following statement explaining the situation:

Dec. 14, 2020 data note: Tuesday’s total case counts may include up to 2000 duplicates. Negative test results data from Nov. 21, 2020 through today are incomplete, as are positive test results from Dec. 11 – Dec. 13, 2020, thus testing numbers should be interpreted with caution. The Epidemiologic Curves tab is the most accurate representation of COVID activity and is updated daily as new cases are identified and duplicates are resolved.

Statewide we continue to set new records, as the virus rages across Washington. The most recent (Dec. 13) state overview from the Washington Department of Health shows confirmed cases passing a new milestone at 203,797, a seven-day gain just shy of 20,000 from last week’s total of 184,404. That’s more than 3,000 newly-infected Washingtonians per day. Deaths have now reached 2,918. Total tests administered now stands at more than 3 million. 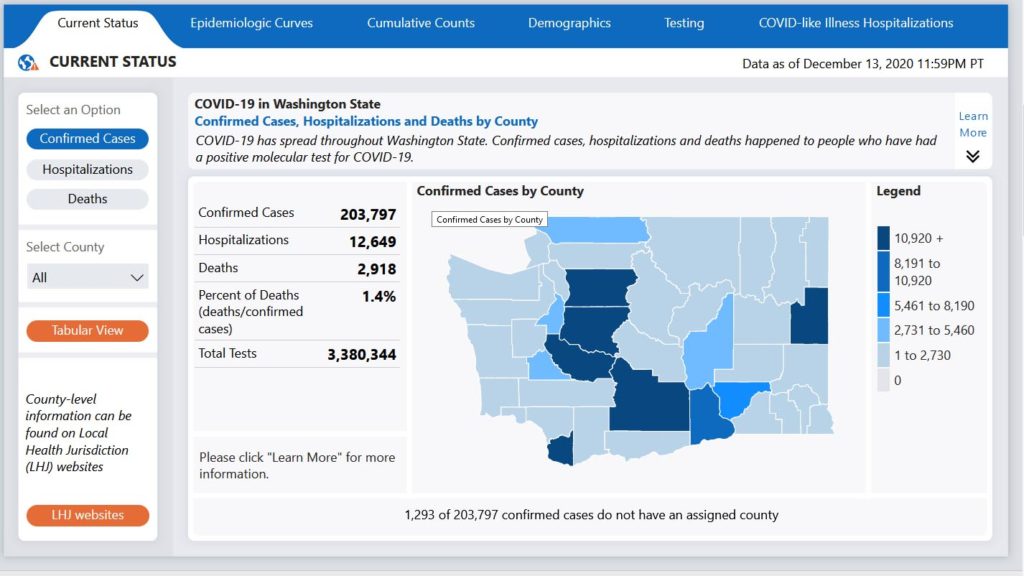 This record surge is further reflected in the Dec. 13 case rate of 474.0 (cases per 100K population, two-week rolling average) up from the previous week’s figure of 436.1 and almost 19 times the state goal of 25 (which we actually achieved as recently as March). 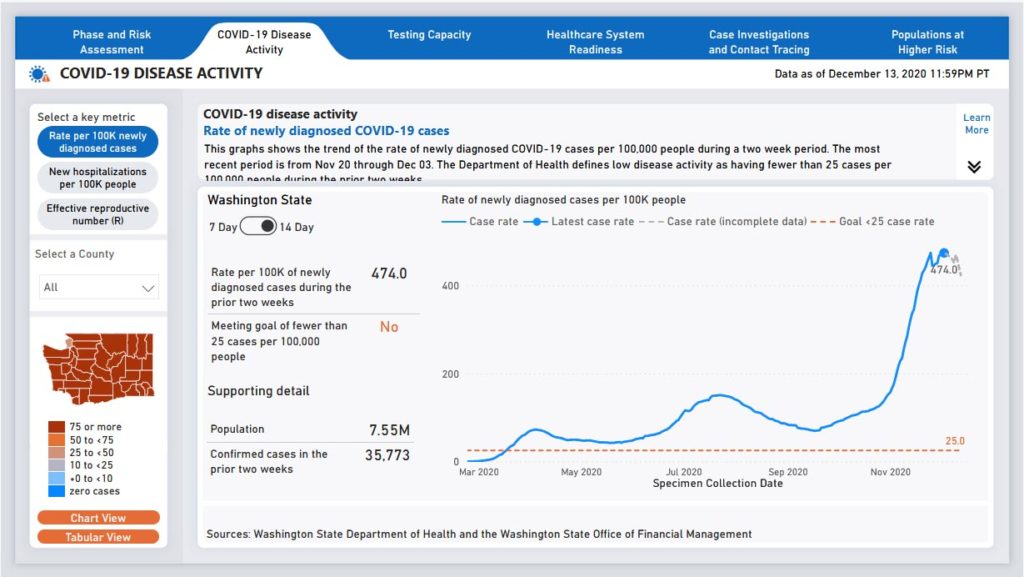 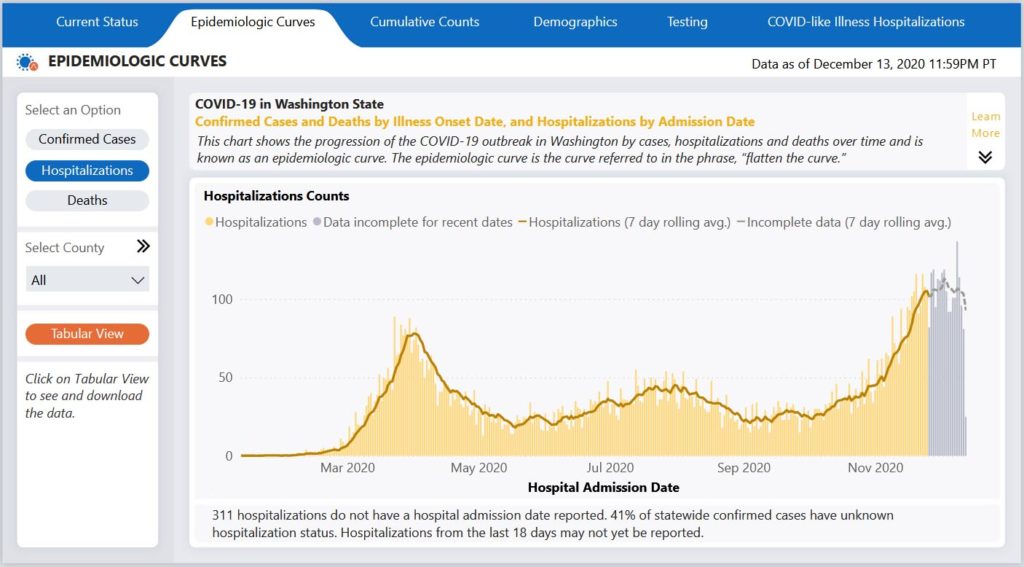 Testing activity continues at a rapid rate in Washington state with unprecedented numbers of Washingtonians seeking tests in the lead-up to the holidays. The rising positivity rate however is yet another sobering indicator of the current surge in coronavirus infections in our area. 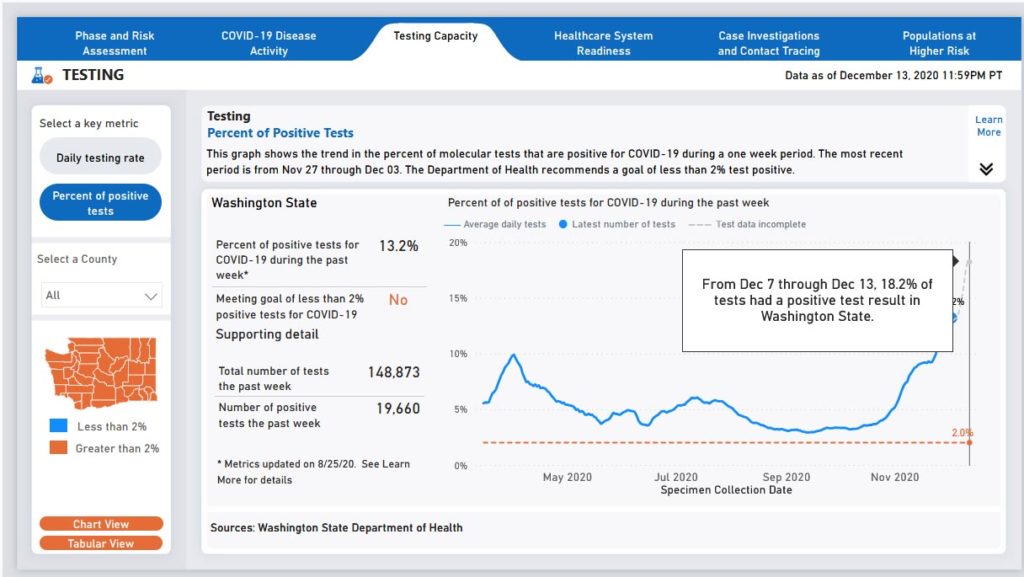 While the map below shows the county-by-county status of reopening under the Safe Start program announced by Gov. Inslee on May 31, more recent restrictions have rendered these guidelines mostly obsolete by mandating renewed shutdowns and other measures. We continue to include this graphic because the table to the left of the map provides a one-stop quick summary of the latest numbers and critical metrics, some of which are reported in more detail above. 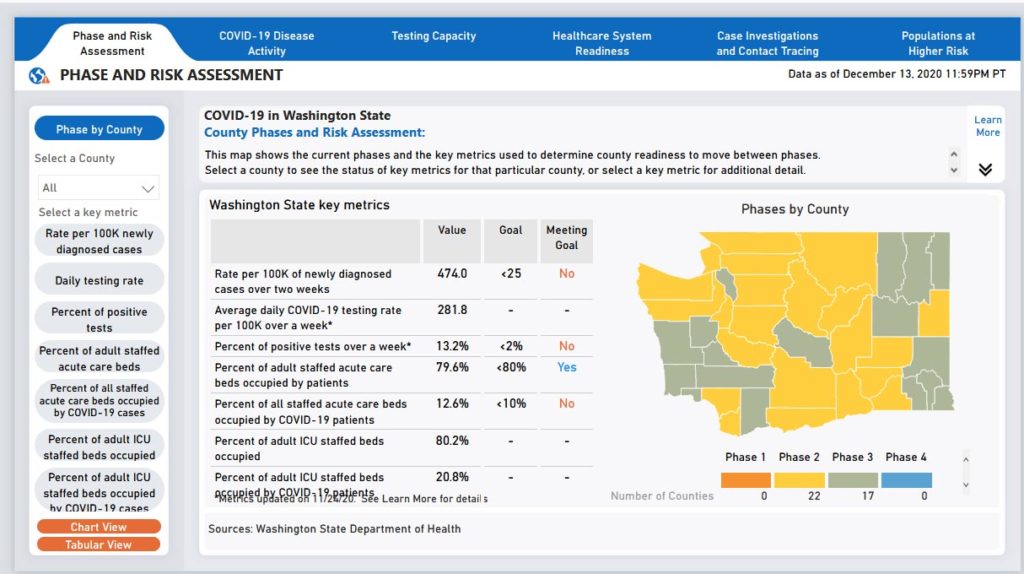 State demographic patterns continue unchanged, with the most recent report following the familiar pattern of most infections among younger people, and most hospitalizations and deaths in older populations. Older adults continue as the most hard-hit group, with those more than 80 years old comprising a mere 4% of cases but at the same time more than half the COVID-related deaths. Note that nursing home residents will be among the first to receive the vaccine, followed closely by people 65 and over. 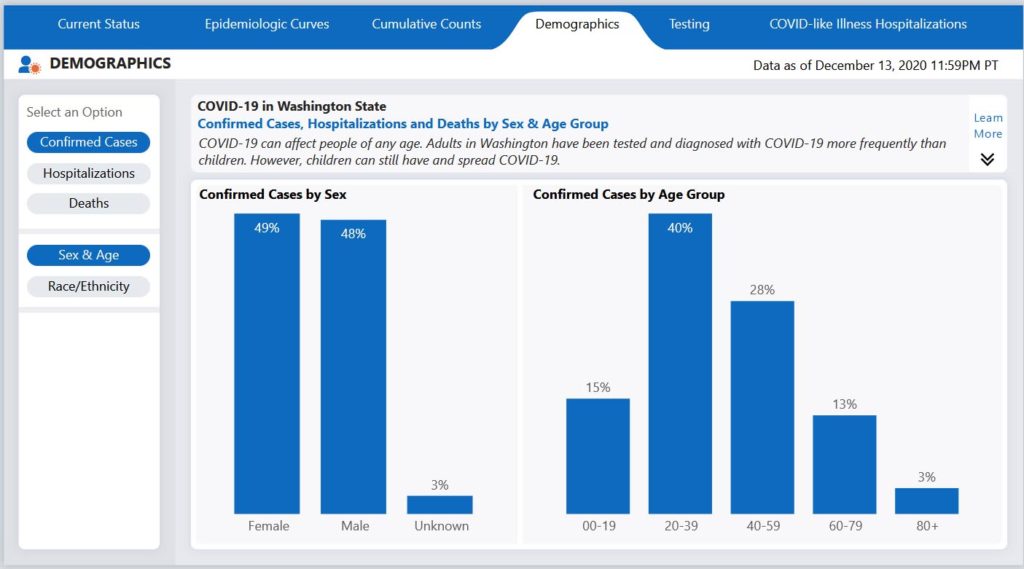 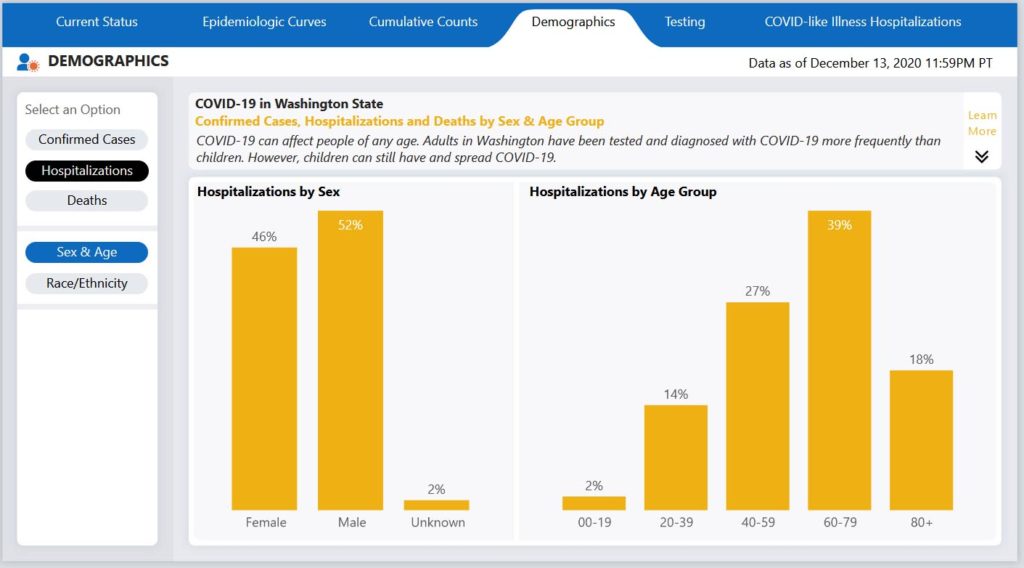 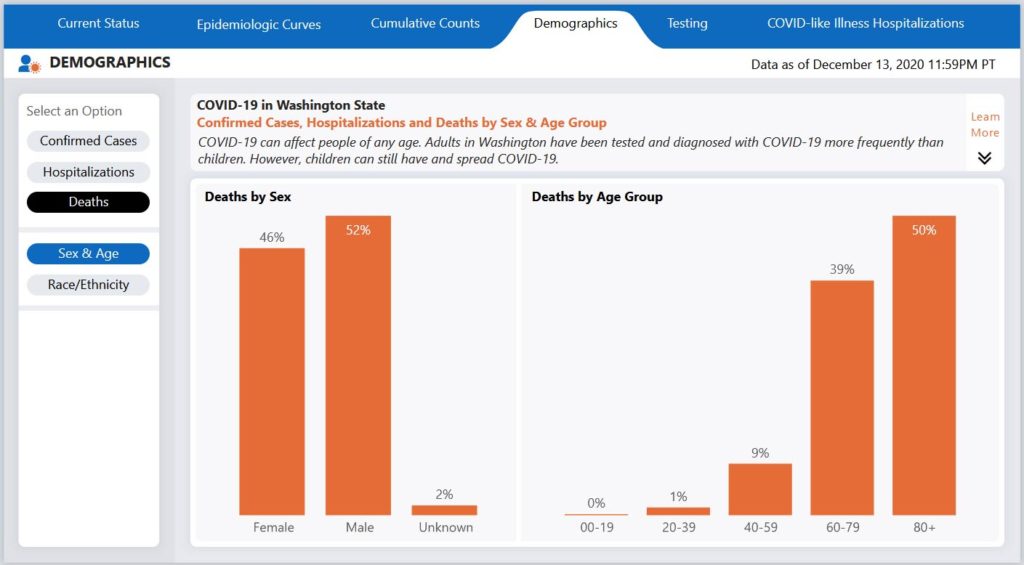 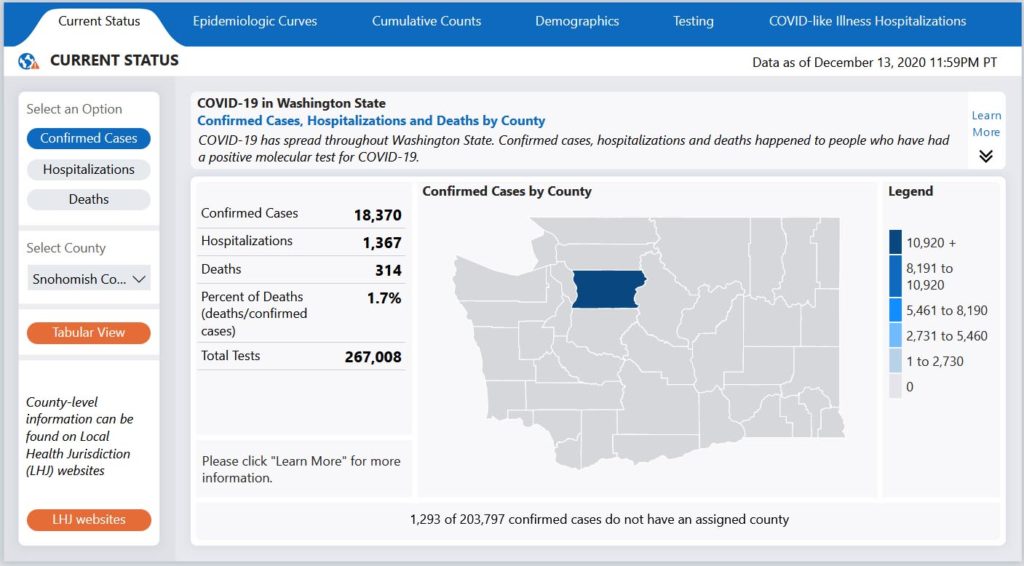 The Nov. 28 Snohomish County daily new case count continues to climb into record territory as the following two charts illustrate, surpassing previous counts and showing no sign of letting up.  The first chart from DOH indicates incomplete data with grey bars. The second chart from the Snohomish Health District provides daily numbers for the entire record-keeping period, but as with DOH the most recent data are still being finalized. 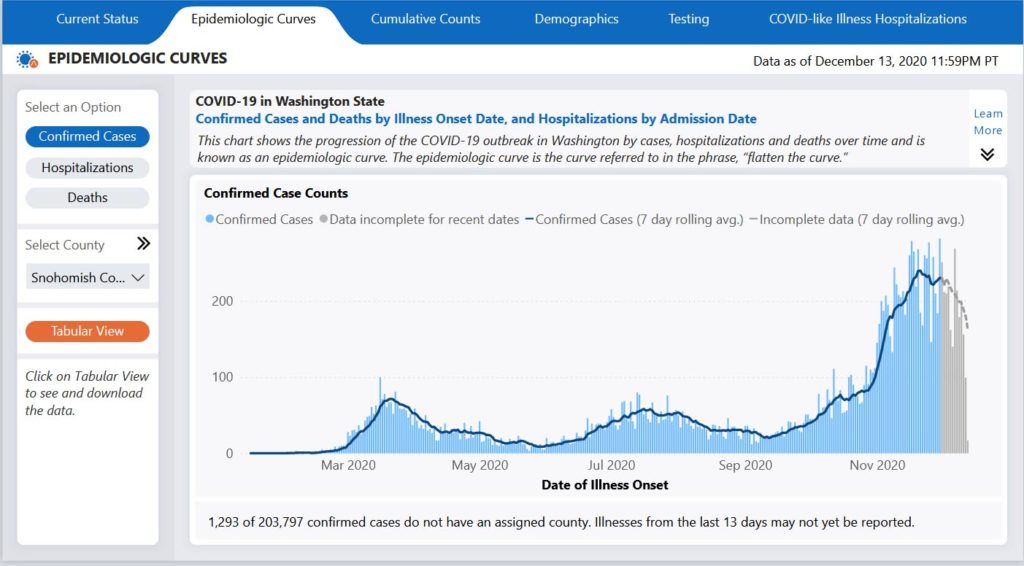 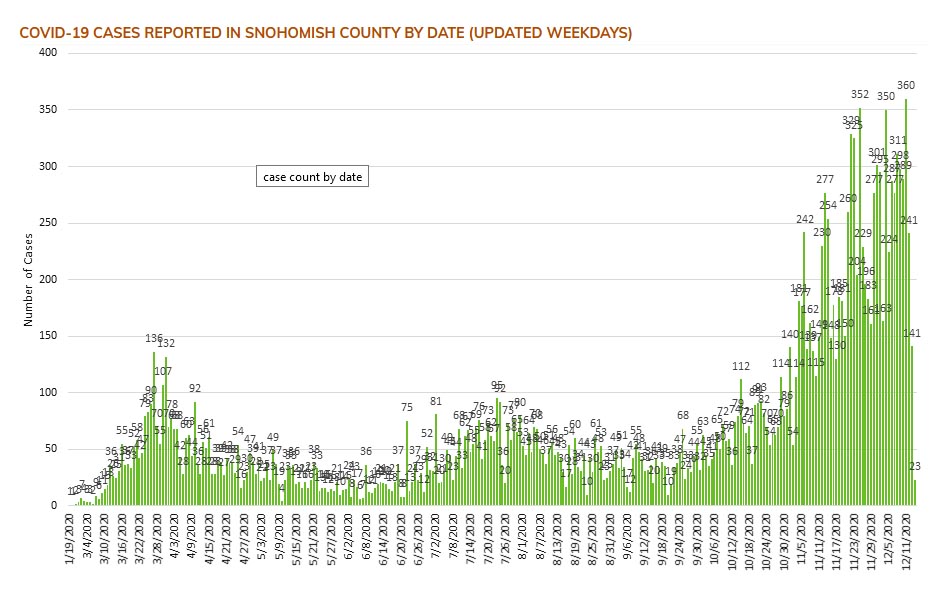 Trends in critical county measures over time (total cases, recovered cases, and active cases as of Dec. 15) continue their ever-steepening climb into record territory, as the curves for total and active cases increase exponentially. 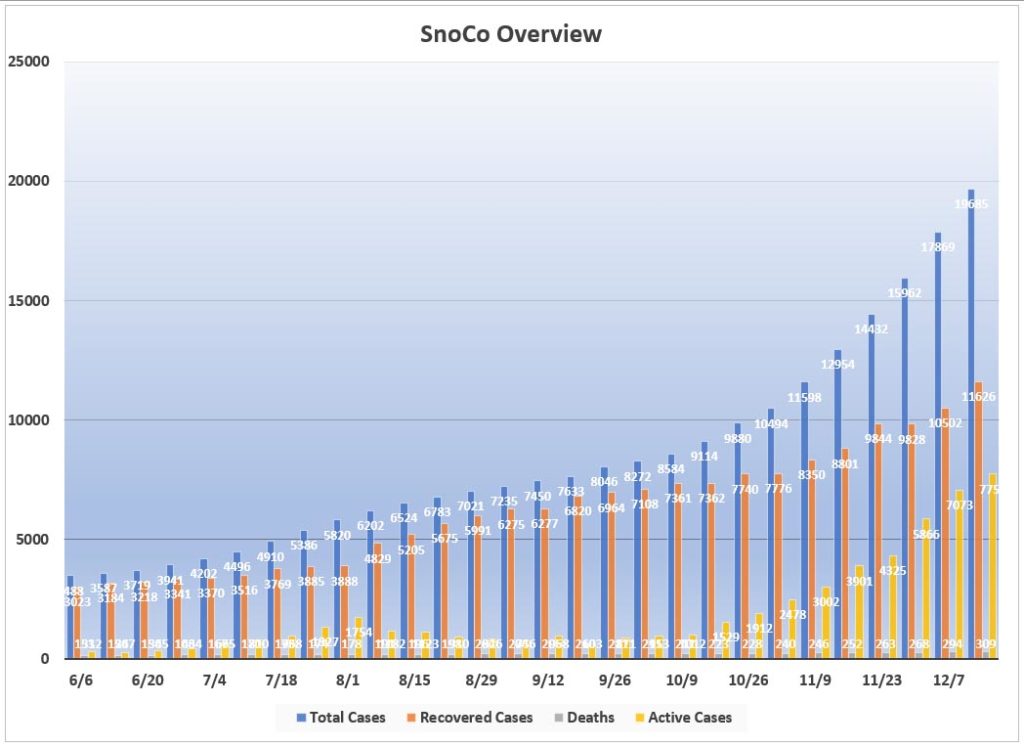 The two-week rolling average case rate per 100,000 chart from the Snohomish Health District continues the sharp gains of the past 30 days, standing at 448 — a gain of 22 points from last week’s record high of 426. 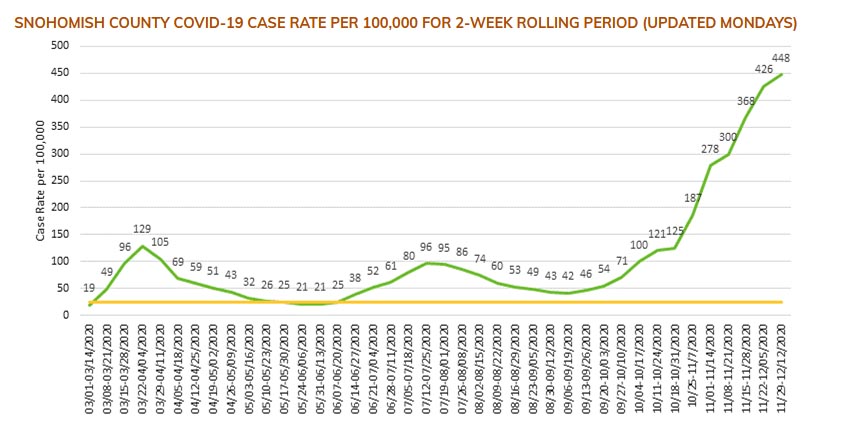 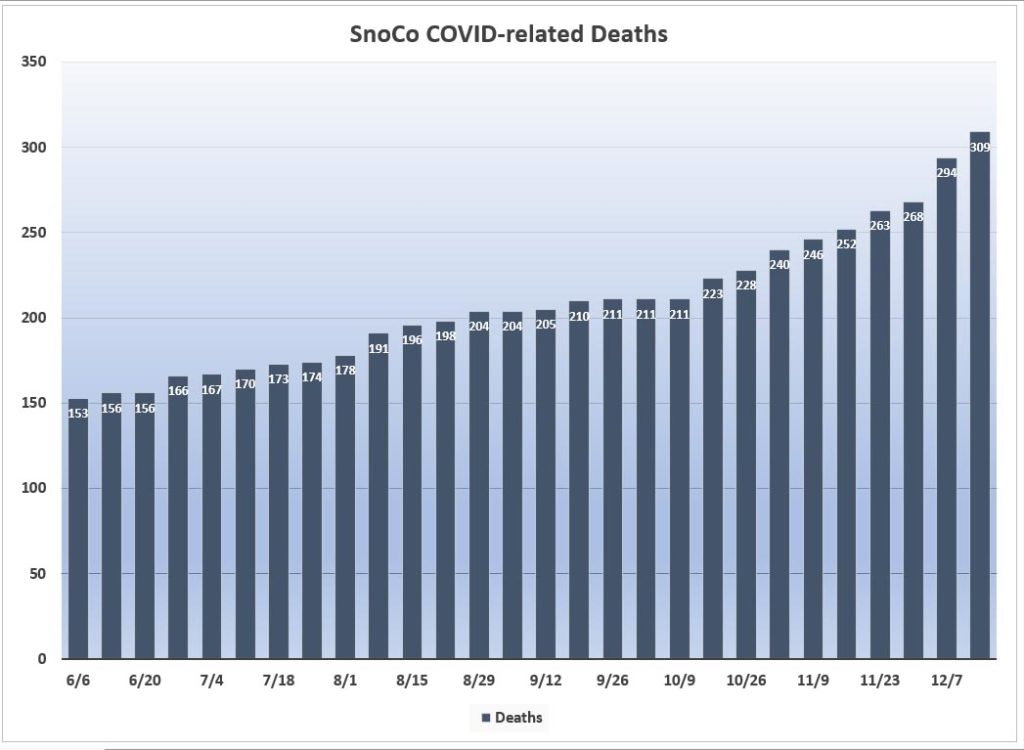 The latest numbers on deaths at the county level stretching back to March are reported in the charts and tables below from the Snohomish Health District (compare these with the above chart – discrepancies due to Department of Health ongoing data reporting methodology revisions as outlined above). 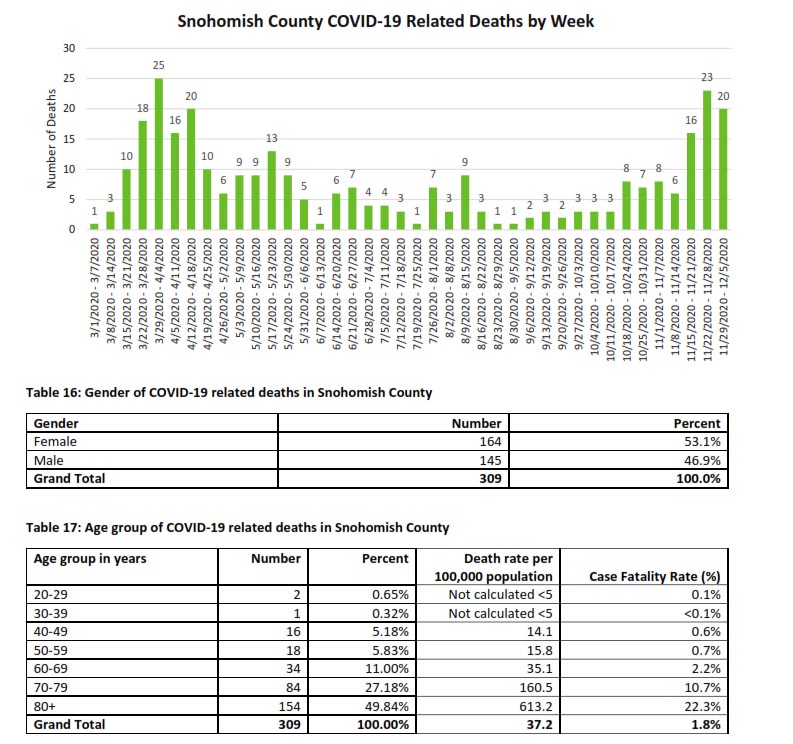 The testing activity table (weekly numbers) and chart (rolling average) from the Snohomish Health District is the same as previously reported (numbers through Nov. 14) due to issues with processing data at the county level (read more here).  We include it again here for reference. 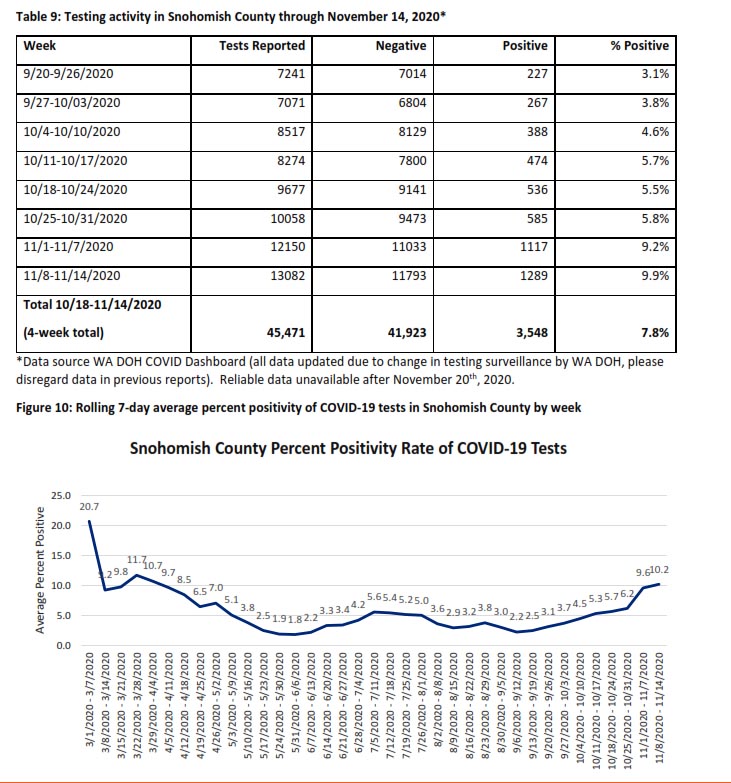 Note: With the exception of death numbers, these data are taken from the most recent updates from the Snohomish Health District Snapshots and Reports web page.  As data are verified, occasional true-ups are made in the interest of accuracy and these may result in changes to previously posted numbers.  Verified death numbers lag by a week, and are taken from the  Dec. 15 COVID-19 Weekly Update report from the Snohomish Health District. Because these are coming from two different sources, where necessary figures have been interpolated for clarity.

Critical metrics (total cases, recovered cases, deaths, and active cases) for our home cities provide grim testament to the fact that the pandemic has come home to roost. 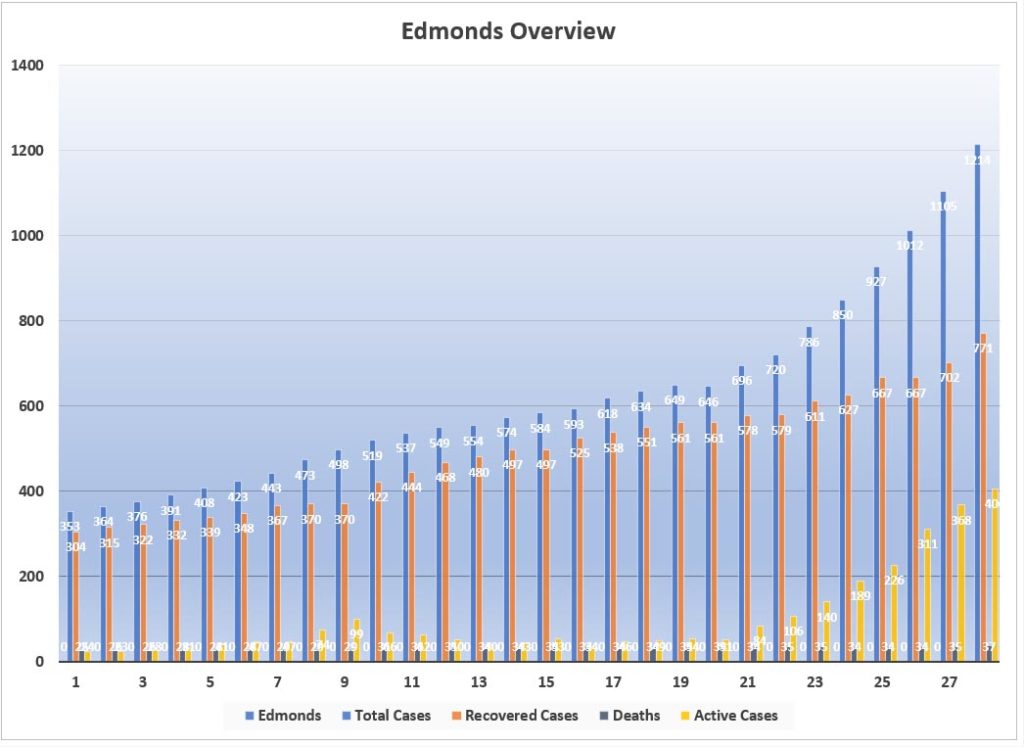 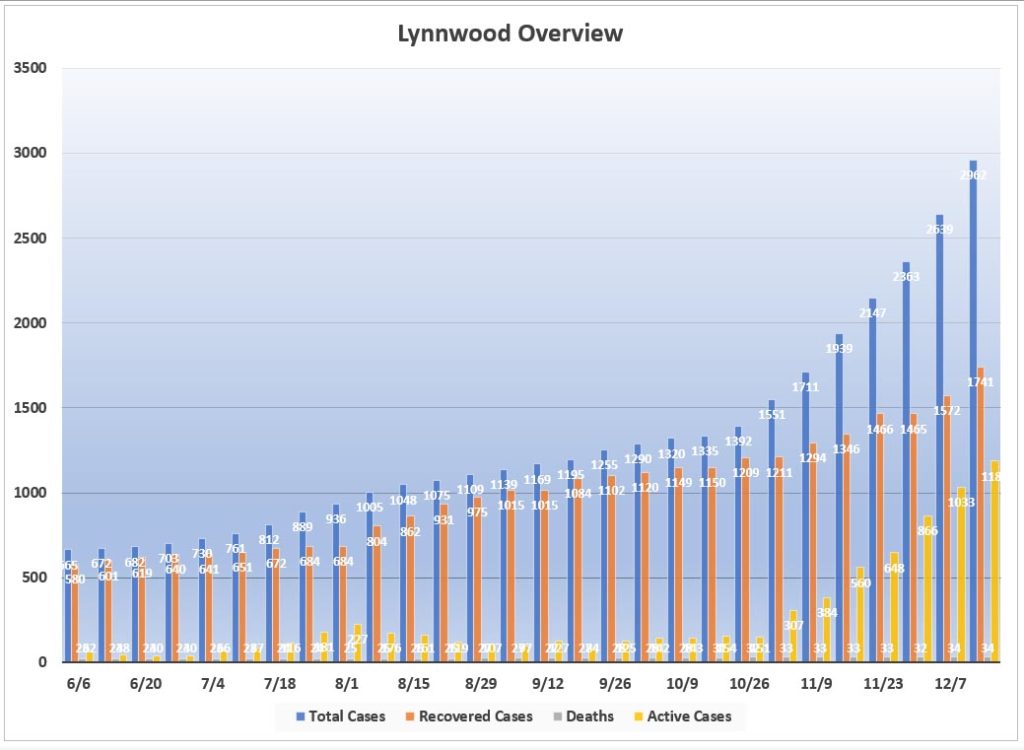 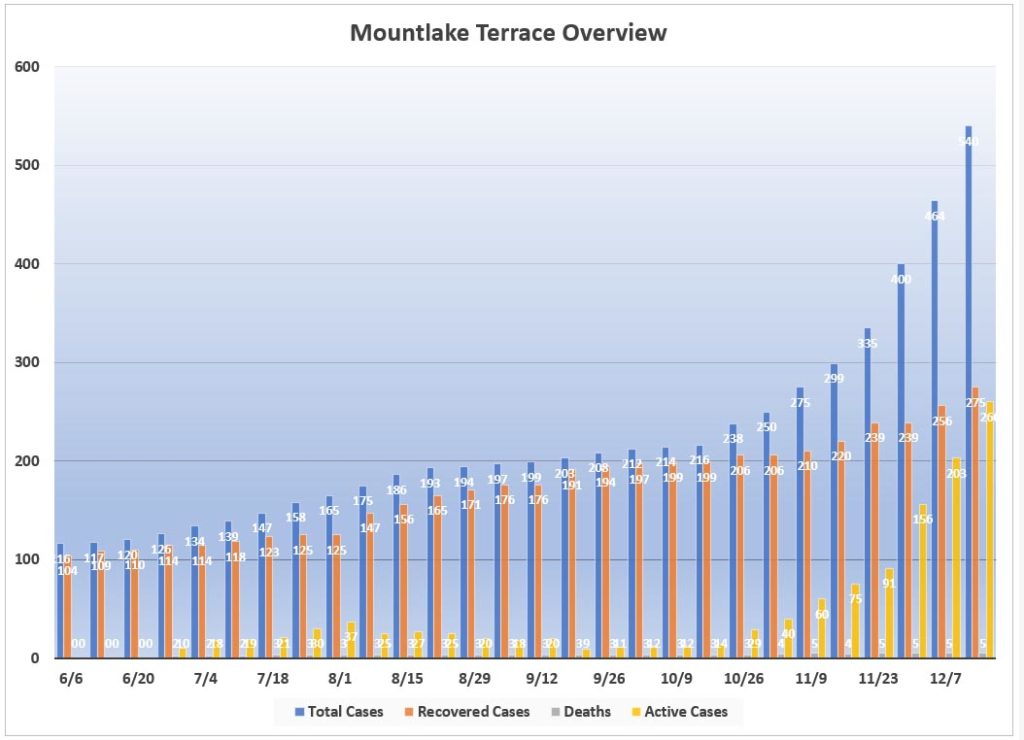 Note particularly the reflection of national and worldwide trends, as total cases and active cases continue their exponential increases in our own backyards, while recoveries lag behind.