Each week we scour the internet to collect the latest information on the COVID battle from global to local levels.  Our aim is to provide you – our readers – with a one-stop-shop to gain a comprehensive overview of progress in fighting the pandemic at all levels

The good: Vaccinations are ramping up across Washington state, the U.S., and the world as health care workers, the elderly and front-line first responders receive their initial round of coronavirus vaccine shots.  Despite many states (Washington among them) learning mid-week that they would not be receiving their full allocation of Pfizer vaccine as originally promised under Operation Warp Speed, the late-breaking FDA approval of a second vaccine from Moderna has put hundreds of thousands of additional doses in the pipeline and on their way to the arms of patients.  A plus – the Moderna vaccine is more temperature stable, making it the clear choice for areas and facilities lacking the extreme refrigeration equipment needed to store the Pfizer vaccine.

Closer to home, the Snohomish Health District reports encouraging news that for the first time since early September, the rolling two-week case rate in Snohomish County decreased from 444 to 427 per 100,000 residents (see below for a chart and more info).  Coupled with the arrival of the first COVID-19 vaccines in the county, these are promising signs.

“For that trend to continue moving in the right direction, we really need all of our residents and businesses to keep those important public health measures up during the holidays,” said Dr. Chris Spitters, Health Officer for the Snohomish Health District. “As hard as it is, avoiding indoor gatherings, wearing face masks and keeping six feet apart from those we don’t live with are the key to easing restrictions in the new year.”

The bad: The fall coronavirus surge continues unabated, as new infections skyrocket, outstripping the capacity of ICUs across the nation and straining health care staff to the breaking point. On top of this, a new more infectious strain of the virus emerged this week in southern England, prompting more than 40 countries to ban all incoming flights from the U.K.  Although the U.S. has yet to enact a similar ban, governors of several states – including Washington’s Gov. Inslee – have issued orders aimed at keeping the new strain from gaining a foothold here.  While scientists continue to study this new coronavirus variant, early assessment suggests that although much more infectious, the new strain shows no signs of increased resistance to the vaccines or of producing more severe cases of COVID-19.

Here in Washington, officials continue to urge residents to double down on masking, social distancing, and limiting gatherings to small groups of immediate family. Read about our state’s new restrictions as we move into winter.

According to the Washington State Coronavirus Response team, “staying home is still safest. If you do go out, keep it quick, keep your distance and wear a face covering. Recreate and do business locally to avoid spreading the virus across county lines. Limit the number of people outside your household that you gather with every week. If you feel symptoms of COVID-19, get tested. Gathering in groups—even with people we know—may spread COVID-19. The more people we interact with at a gathering and the longer that interaction lasts, the higher the risk of becoming infected. The safest action, especially if you’re in a high-risk category, is to avoid gatherings and find different ways to celebrate.”

To help you, our readers, navigate this sea of information and sort this out for yourselves, here once again are the latest numbers, charts, and statistics from the world to our own backyards.

This week’s global COVID case count shows more than 77 million cases since the start of the pandemic, almost 5 million more than the week before (see our earlier reports from Dec. 15 and  Dec. 8 for comparison). The United States added more than a million and a half new cases in the past 7 days as we close in on the 20 million mark and continue to lead the world in overall number of cases since the pandemic began. Worldwide deaths now stand at 1.7 million, with the U.S. (now at 321,301 deaths) adding more than 22,000 to last week’s total, translating to more than 3000 deaths per day, or one death every 30 seconds.

The most recent tabular display of the top 12 nations from the World Health Organization shows similar numbers. Again, be aware that the small discrepancies between these and the Johns Hopkins data are due to the updates being taken in different time zones (WHO is based in Europe, and due to time differences the numbers are approximately 10 hours earlier than Johns Hopkins), a testament to how quickly the infection is claiming new victims. 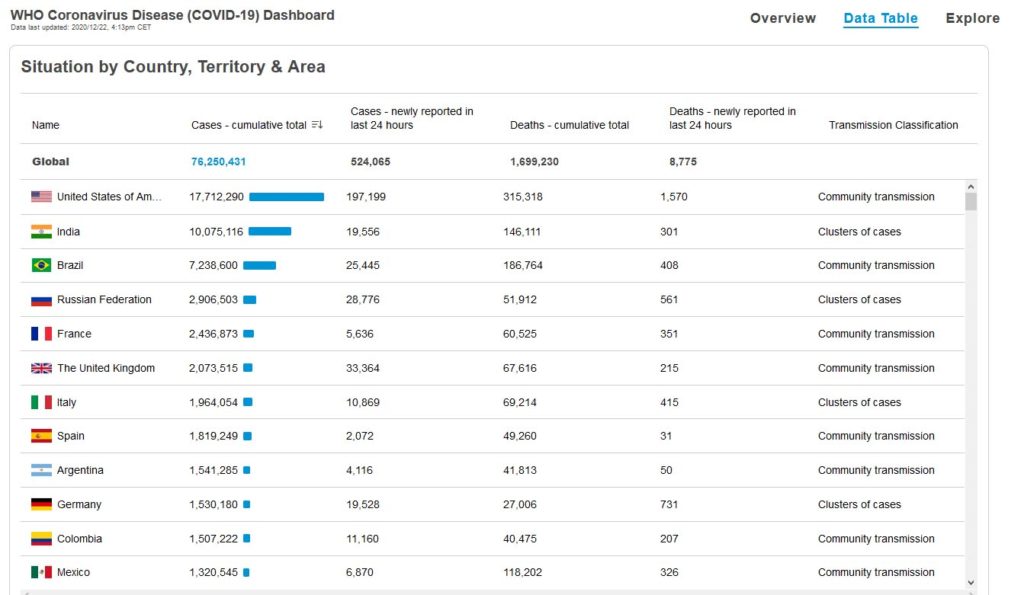 While the U.S. leads the world in overall case numbers, when the numbers are viewed as cases per capita (cases per 1 million population in this case) the U.S. jumps to 7th place from 9th last week. Note that all these nations comprise much smaller samples, so while statistically these countries may show a higher per-capita rate, the small sample size makes comparisons with the U.S. dubious at best.  See the complete interactive table where you can rank countries by any of the various metrics here. 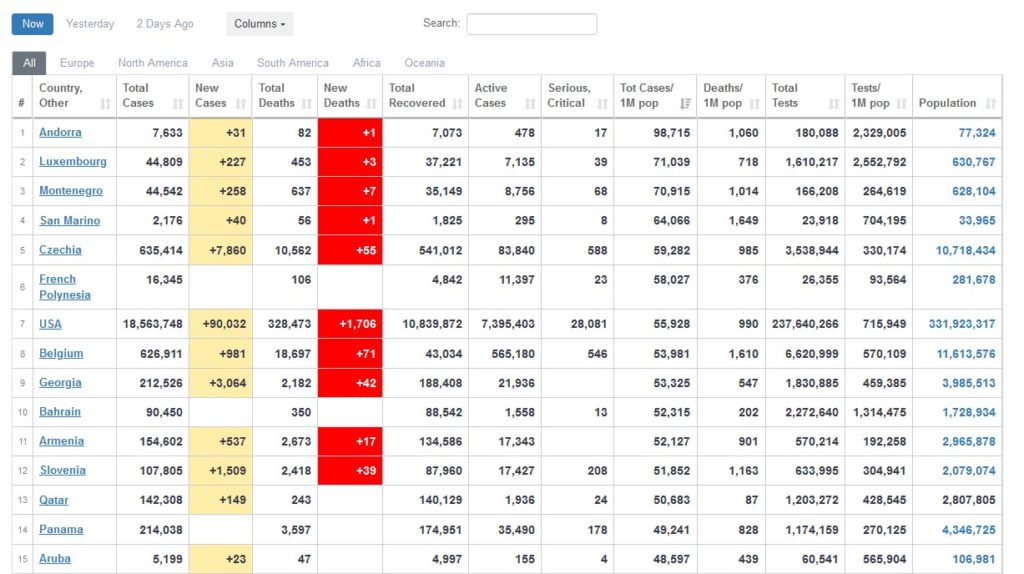 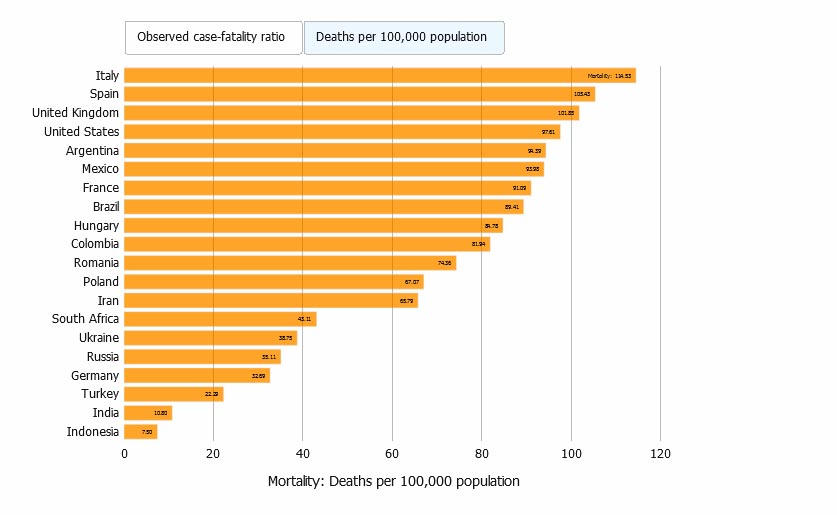 Overall trends in the United States since April 1 are summarized in the charts below from the COVID Tracking Project. Note that the red dots indicate new seven-day average records for the various metrics. 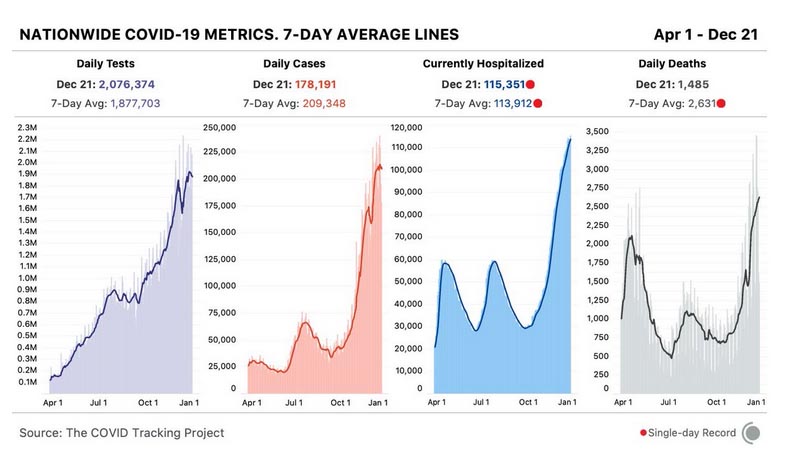 The Washington State Department of Health continues to clean up its data files, and as this work is ongoing some data reports are incomplete and/or based on older assumptions. Here is the most recent DOH statement explaining the situation:

Dec. 21, 2020 data note: Today’s total case counts may include up to 100 duplicates. Negative test results data from November 21, 2020 through today are incomplete, thus testing and case numbers should be interpreted with caution. The Epidemiologic Curves tab [on the DOH COVID dashboard] is the most accurate representation of COVID activity and is updated daily as new cases are identified and duplicates are resolved.

Statewide we continue to set new records, as the virus spreads across Washington. The most recent (Dec. 20) state overview from the state Department of Health (DOH) shows confirmed cases at 218,415, a seven-day gain just shy of 15,000 from last week. That’s more than 2,000 newly-infected Washingtonians per day. Deaths have now reached 3,106. Total tests administered now stand at more than 3.5 million. 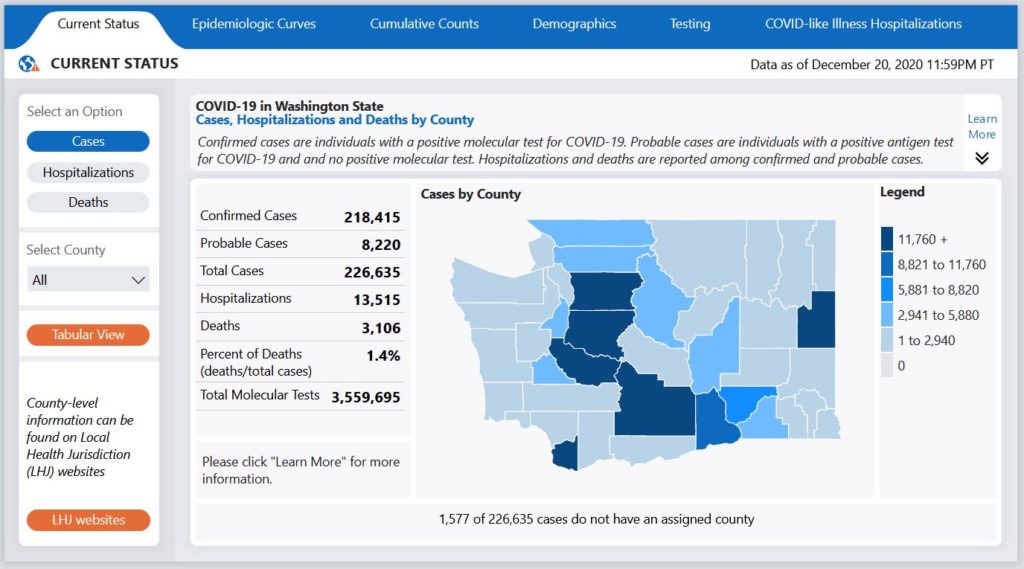 The skyrocketing daily new case count (as of Dec. 19) for Washington Sstate continues its push into record territory. The apparent drop-off is due to continuing data posting issues at the Washington Department of Health as referenced above and is not (unfortunately) a trend. According to DOH, “cases from the last 10 days may not be reported.” (See the interactive chart for Washington state on the Johns Hopkins website here).

This surge is further reflected in the Dec. 20 case rate of 509.9 (cases per 100K population, two-week rolling average) up from the previous week’s figure of 474, more than 20 times the state goal of 25 (which we actually achieved as recently as March). 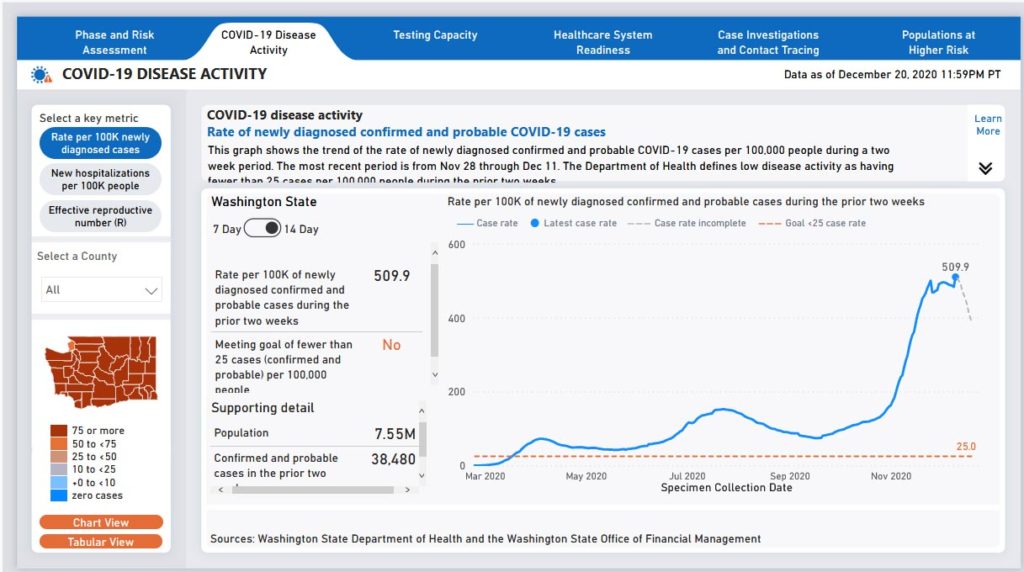 Trends in Washington state’s daily hospitalization and death counts continue their steady rise, with both hospitalizations and deaths surpassing the previous peaks recorded in April. The grey bars on the hospitalization chart are based on incomplete data (according to DOH lagging as much as 14 days behind) and are expected to rise even further as these figures become finalized. Death numbers appear to finally be catching up, although DOH continues to report that “deaths from the past three to four weeks may not be reported.” (Note that the hospitalization chart from DOH reflects Dec 20 data, while the mortality chart from Johns Hopkins includes data through Dec. 17). 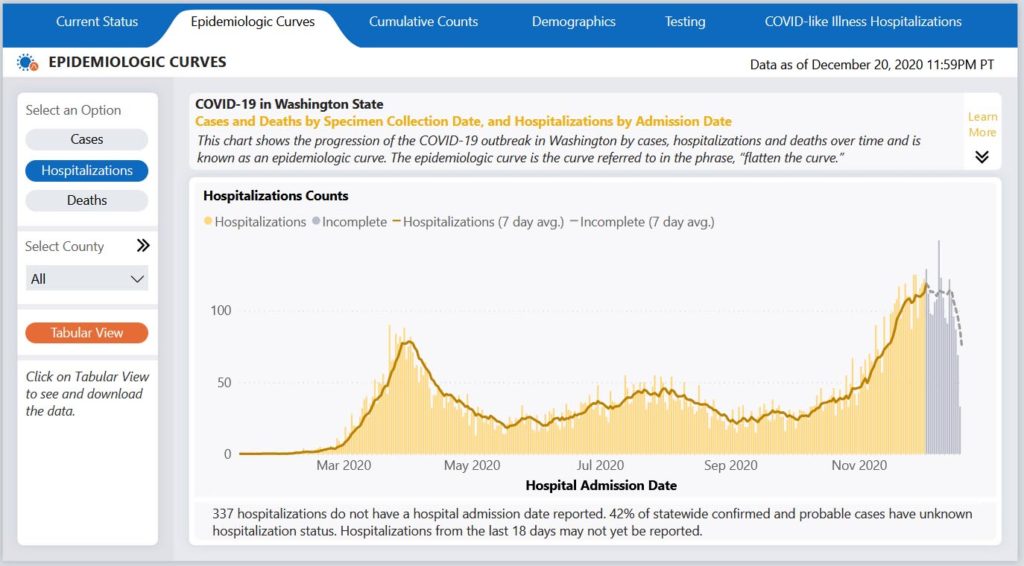 Testing activity continues at a rapid rate in Washington state as unprecedented numbers of Washingtonians sought tests in the lead-up to the holidays. The most recent figure (the top of the grey line in this chart) shows a positivity rate of 17.3 for the period 12/14-20, although this is a preliminary figure. 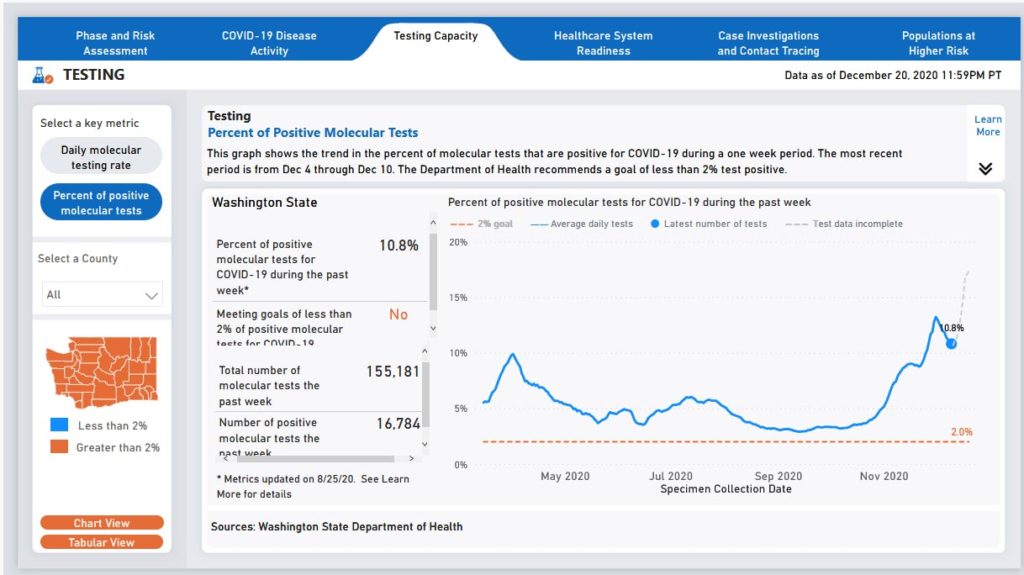 While the map below shows the county-by-county status of reopening under the Safe Start program announced by Gov. Inslee on May 31, more recent restrictions have rendered these guidelines mostly obsolete by mandating renewed shutdowns and other measures.  We continue to include this graphic because the table to the left of the map provides a one-stop quick summary of the latest numbers and critical metrics, some of which are reported in more detail above. 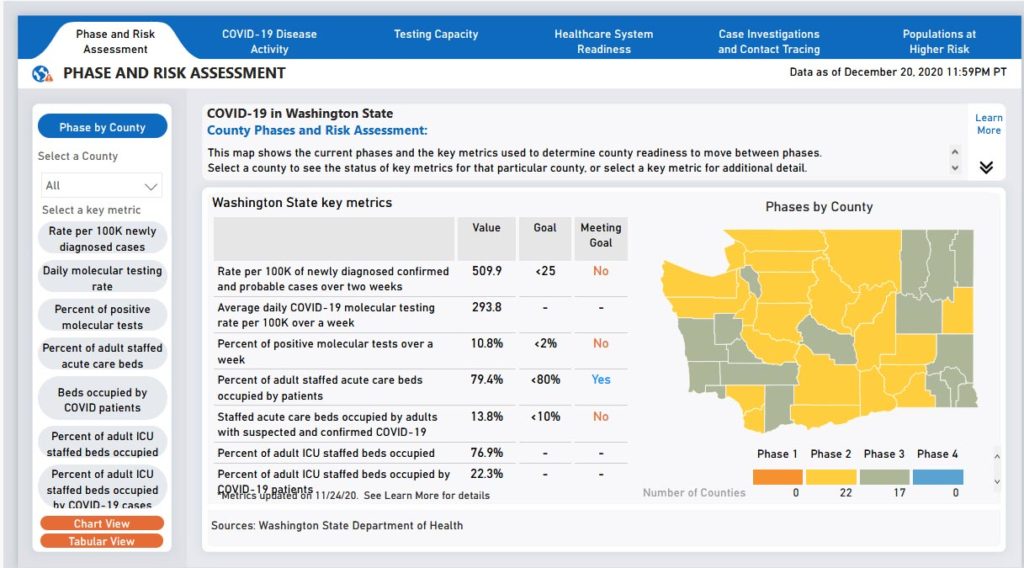 State demographic patterns continue unchanged, with the most recent report following the familiar pattern of most infections among younger people, and most hospitalizations and deaths in older populations. Older adults continue as the most hard-hit group, with those age 80 or older comprising a mere 4% of cases but at the same time more than half the COVID-related deaths.  Note that nursing home residents will be among the first to receive the vaccine, followed closely by people 75 and over. 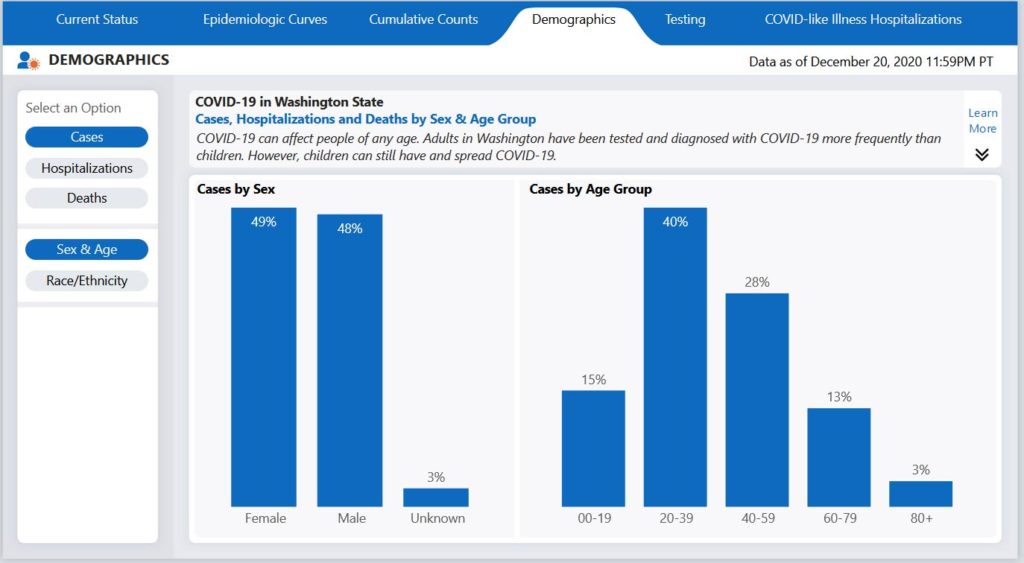 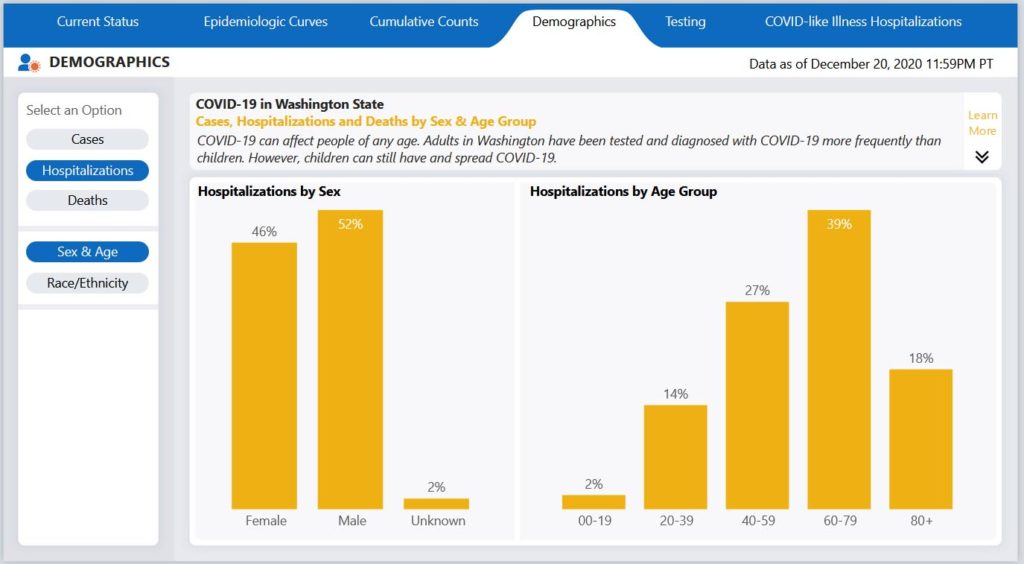 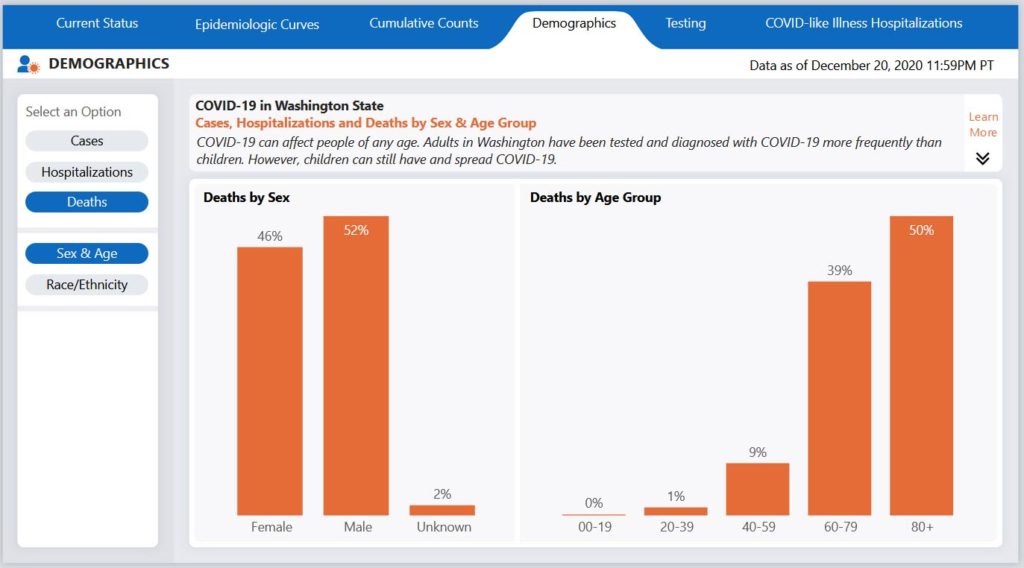 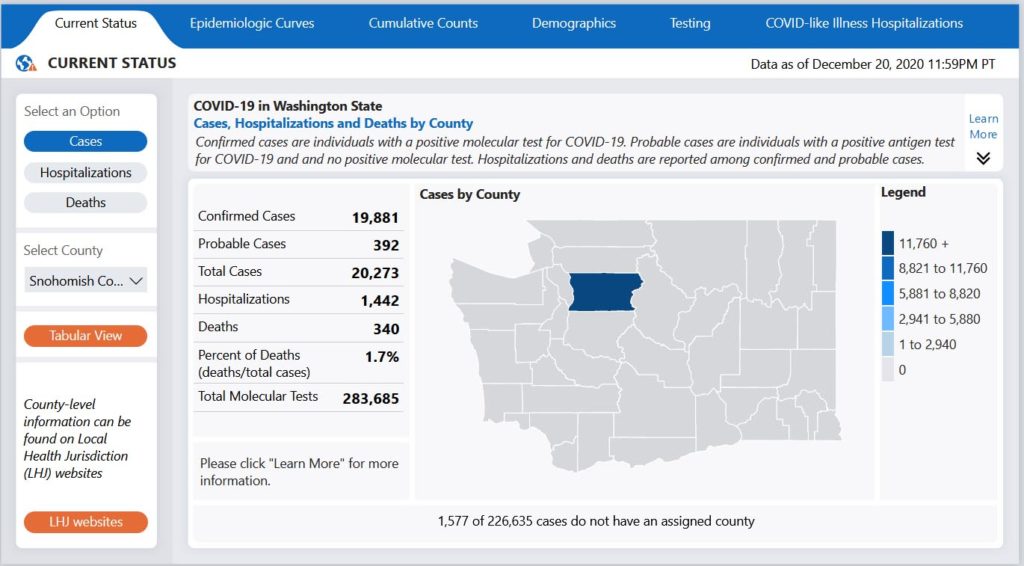 The Dec. 20 Snohomish County daily new case count shows continuing high numbers despite daily aberrations. The first chart from DOH indicates incomplete data with grey bars. The second chart from the Snohomish Health District provides daily numbers for the entire record-keeping period, but because these data come from DOH, the most recent numbers are still being finalized as noted above. 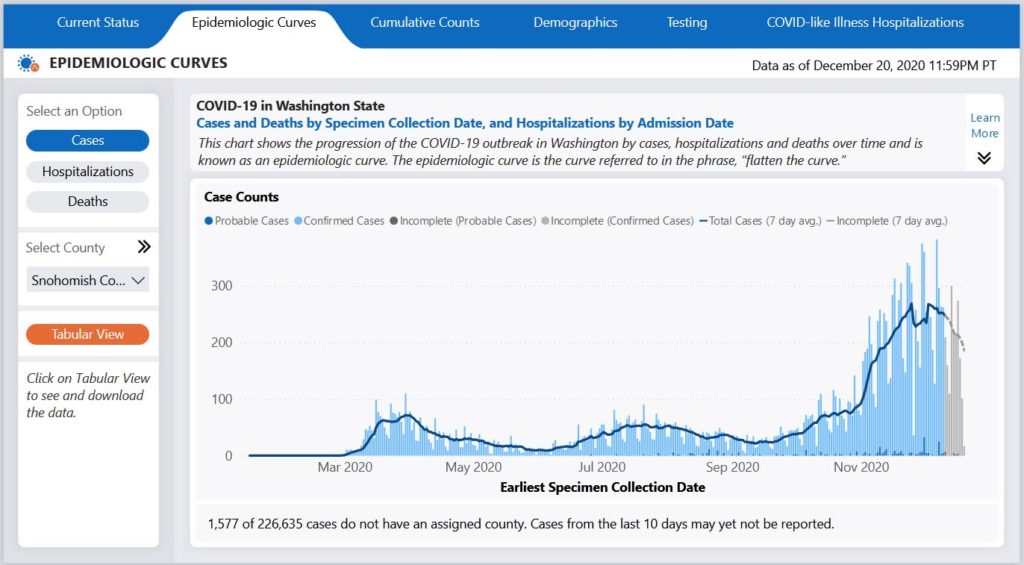 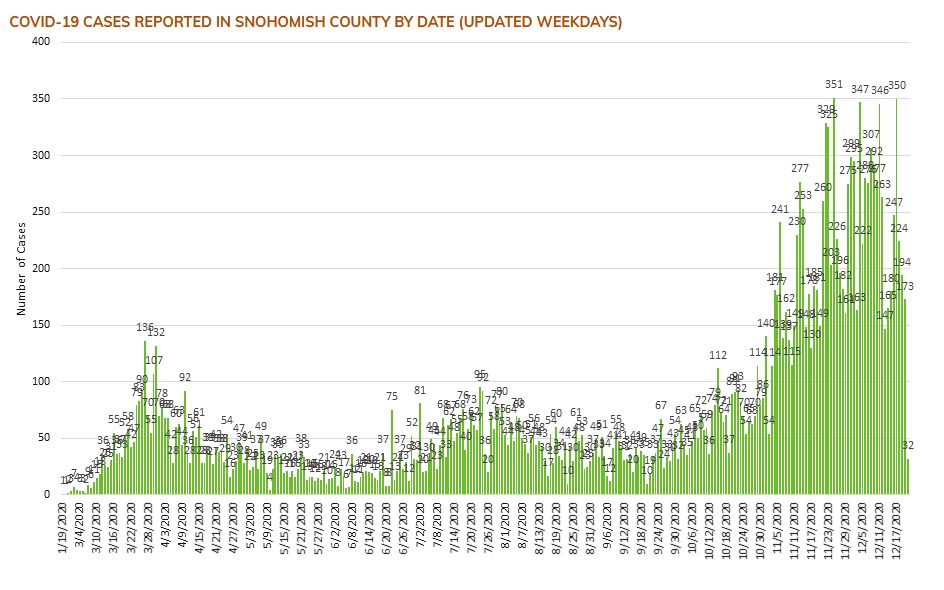 Trends in critical county measures through Dec. 21 show active cases continuing their ever-steepening climb into record territory. Recoveries are picking up, however, driving active cases down slightly for the first time since October. 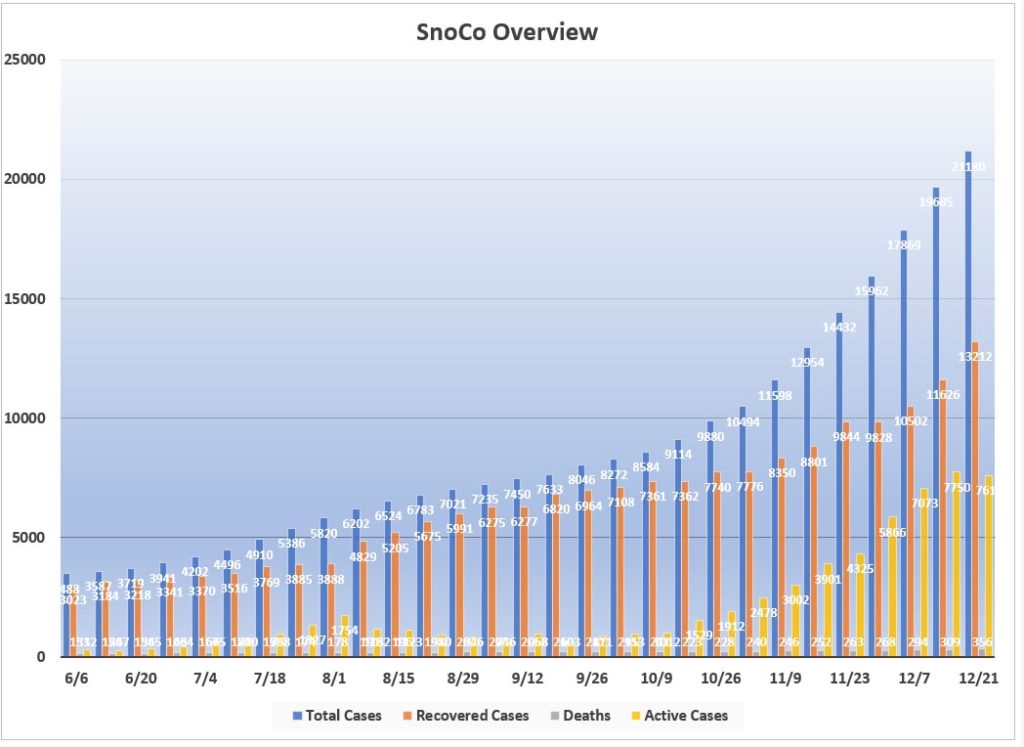 The chart showing the two-week rolling average case rate per 100,000 from the Snohomish Health District indicates a welcome decrease from 444 to 427 per 100,000 residents, a change officials hope will continue as the vaccine is more widely distributed. 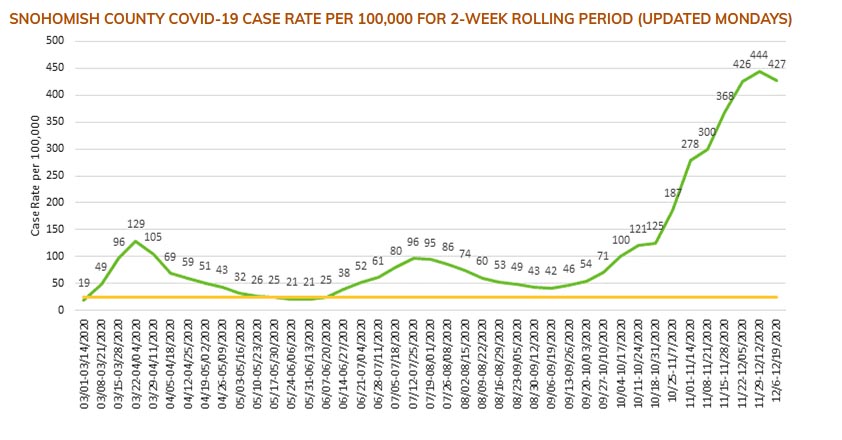 The mortality bar for Snohomish County took a jump this week, due largely to catching up with data that had previously gone unreported (see note above from the Snohomish Health District). 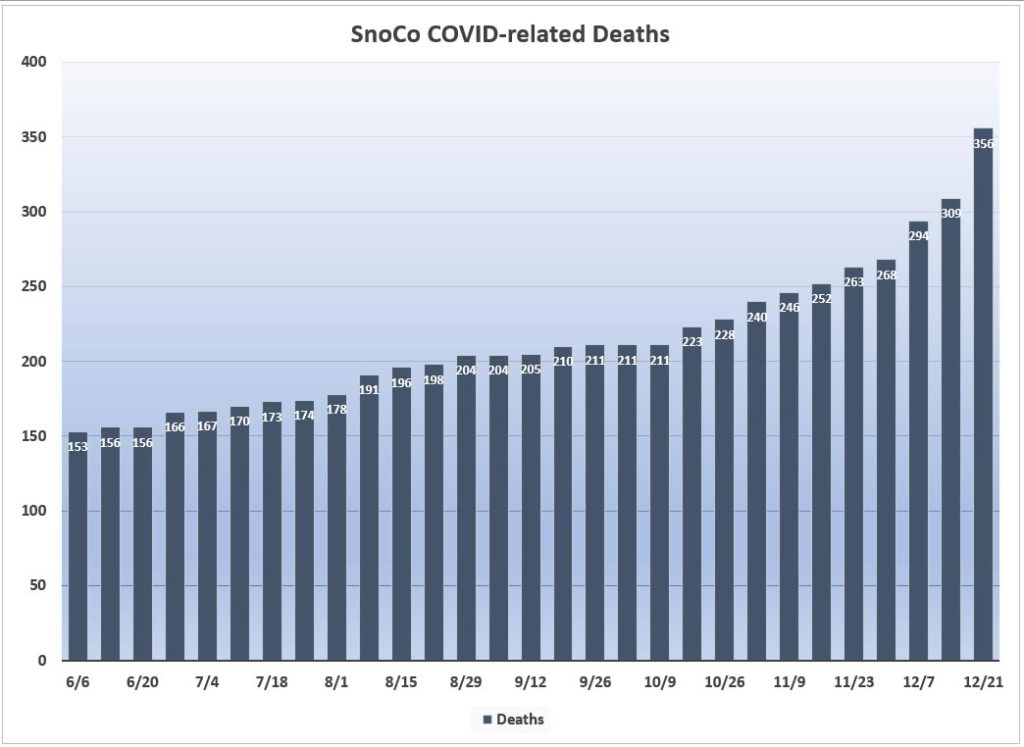 [Testing and enhanced death charts and tables, usually reported in this space, are not available from the Snohomish Health District this week]

Note: Death data for our home cities was not reported by the Snohomish Health District this week, due to the holidays leaving them short-staffed. With these numbers unavailable, we used the previous week’s death data in the current charts and table as placeholders (note in the table that all cities had zero incremental deaths). When the data become available, we will adjust our charts and table accordingly. Other data (total cases and recovered cases) are taken from the most recent Snohomish Health District Snapshots and Reports web page. As data are verified, occasional true-ups are made in the interest of accuracy and these may result in changes to previously posted numbers.

Critical metrics (total cases, recovered cases, deaths, and active cases) for our home cities show that the pandemic is still very much with us at the local level. 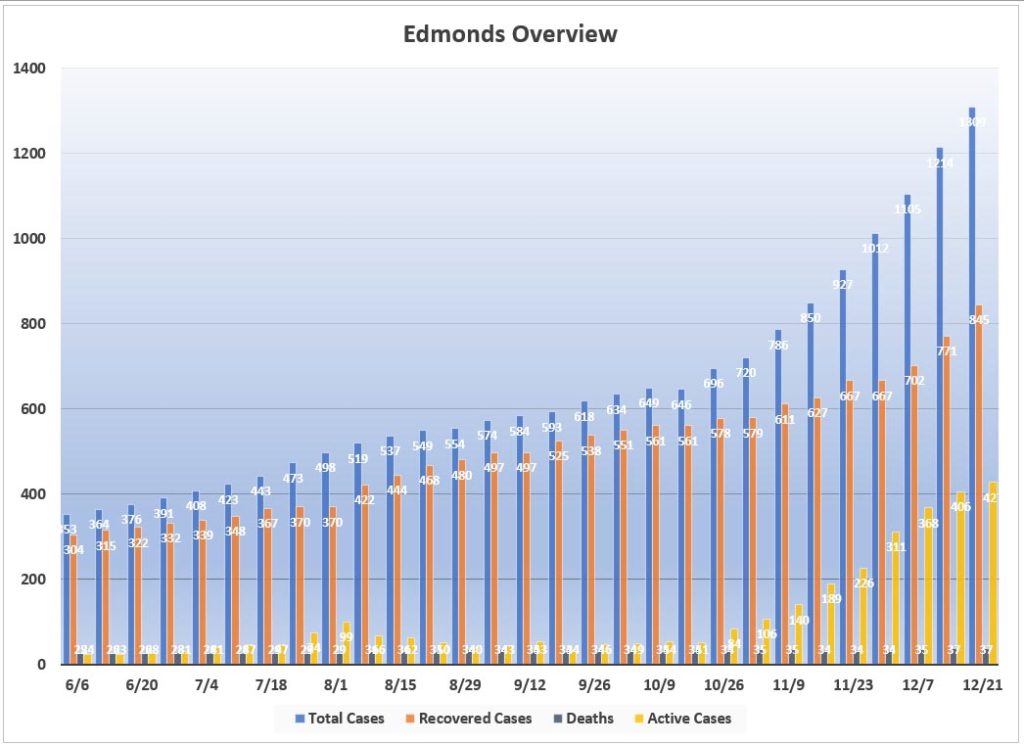 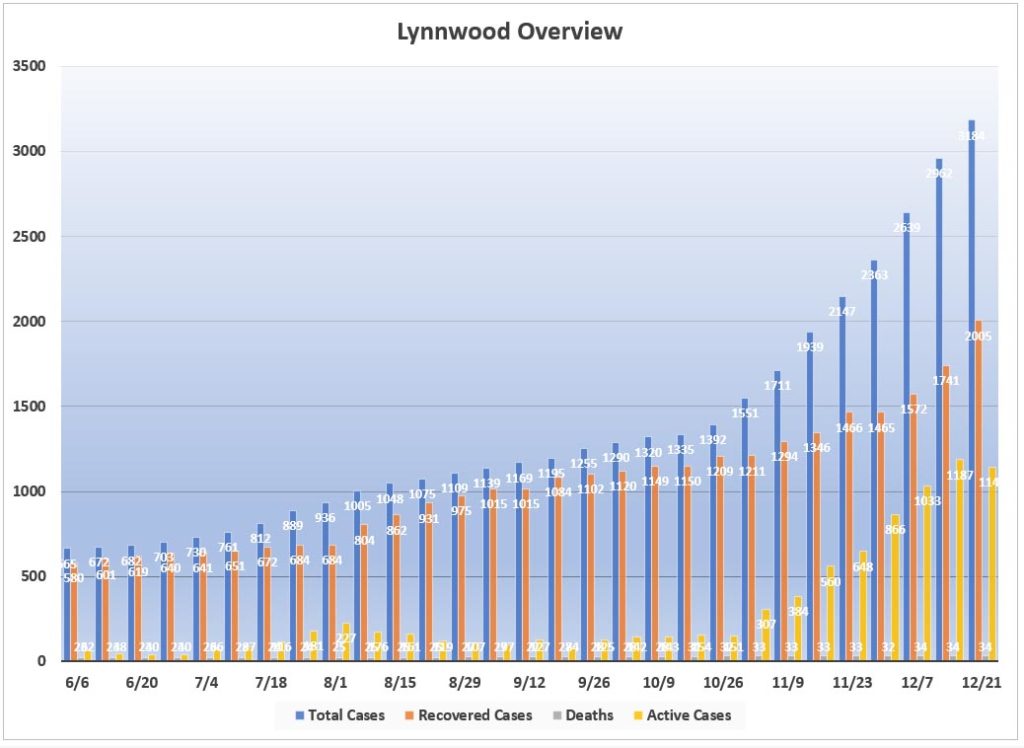 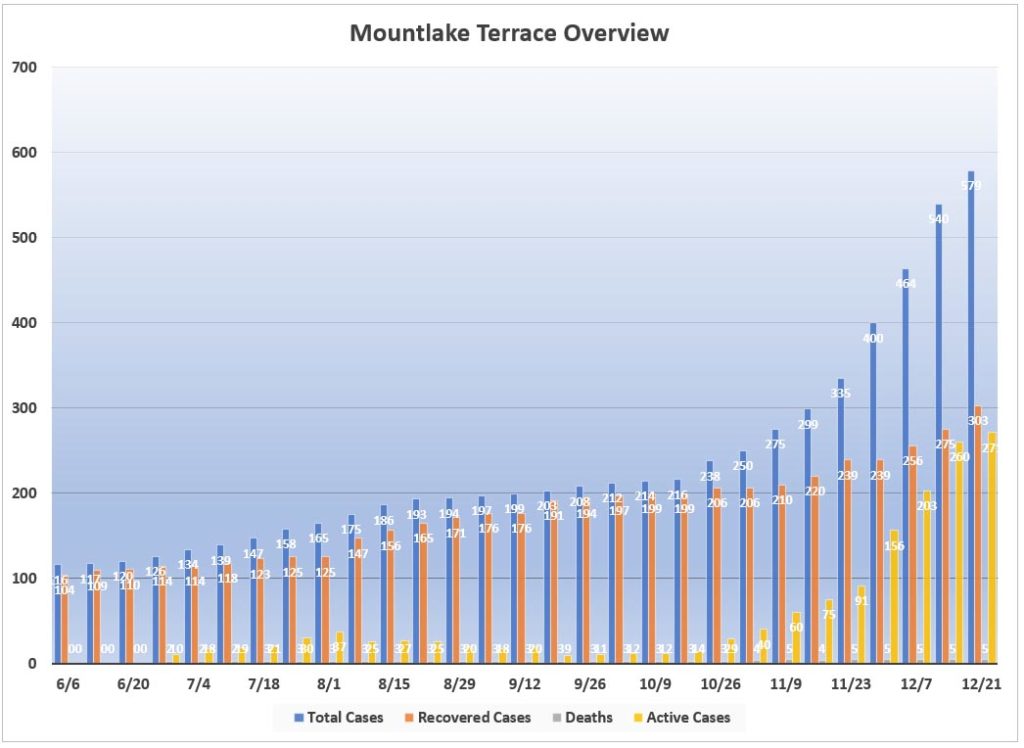 The local numbers summary, data as of 12/21. Because death data was not updated by the Snohomish Health District this week, we have used the previous week’s death totals as placeholders – hence the zeros and negative numbers in the “change since 12/14” columns for both deaths and active cases: