Despite the proximity of expected vaccines, both the U.S. and our local communities find themselves caught in an increasingly severe phase of pandemic, as the coronavirus makes daily gains in strength, intensity and reach.

As the U.S. awaits final vaccine approval, mass vaccinations are already underway in Russia and began Tuesday in the United Kingdom. In the U.S., final FDA approval is expected in a matter of days, which will clear the way for the highest priority groups to get their first round of shots. Read the latest on availably, priority groups, and more from the Centers for Disease Control here.

With contact tracing increasingly critical as the pandemic rages, Washington State has joined with others across the nation in deploying a new tool that works through smart phones to alert users if they may have been exposed to COVID-19. According to officials our version, called “WA Notify,” is completely private and no personal information is collected.  In the first four days, more than 1 million Washingtonians signed up for WA Notify. Learn more here.

Gov. Inslee announced Tuesday that COVID restrictions first imposed in November would be extended through Jan. 4.

To help you, our readers, navigate this sea of information and sort this out for yourselves, here once again are the latest numbers, charts and statistics from the world to our own backyards.

This week’s global COVID case count shows just shy of 68 million cases since the start of the pandemic, a gain of almost 5 million from the week before (see our earlier reports from Nov. 30 and Nov. 23 for comparison). The United States again added more than half a million new cases last week surpassing the 15 million mark, as it continues to lead the world in overall number of cases since the pandemic began. Worldwide deaths have surpassed 1.55 million, with the U.S. (now at almost 285,000 deaths) still comprising almost 20% of the global death total while accounting for 4.25% of the world population (331 million vs 7.8 billion).

The most recent tabular display of the top 10 nations from the World Health Organization shows similar numbers. Note that the small discrepancies of these with the Johns Hopkins data are due to the updates being taken in different time zones (WHO is based in Europe, and due to time differences the numbers are approximately 10 hours earlier than Johns Hopkins), a testament to how quickly the infection is claiming new victims. 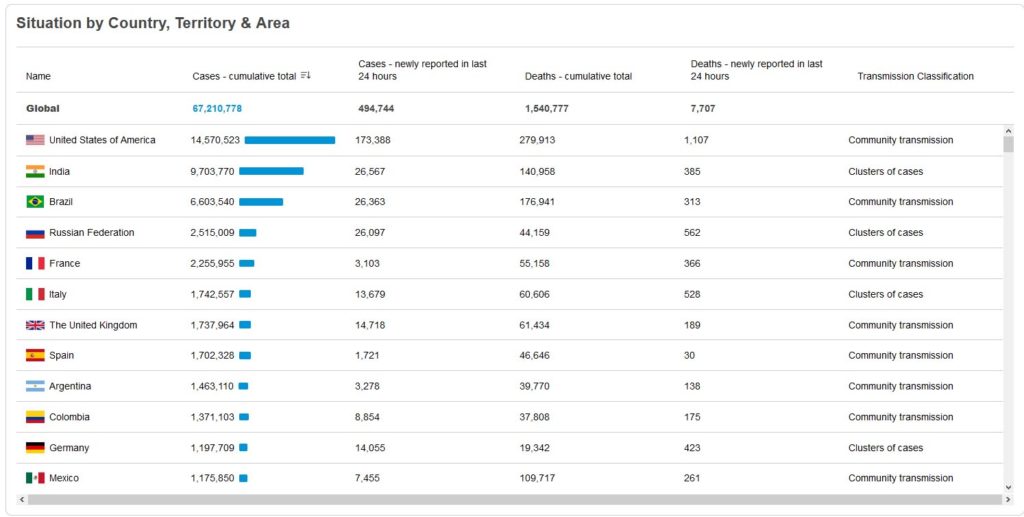 While the U.S. leads the world in overall case numbers, when the numbers are viewed as cases per capita (cases per 1 million population in this case) the U.S. remains in 12th place for the third week in a row. Note that all these nations comprise much smaller samples, so while statistically these countries may show a higher per capita rate, the small sample size makes comparisons with U.S. dubious at best. See the complete interactive table where you can rank countries by any of the various metrics here. 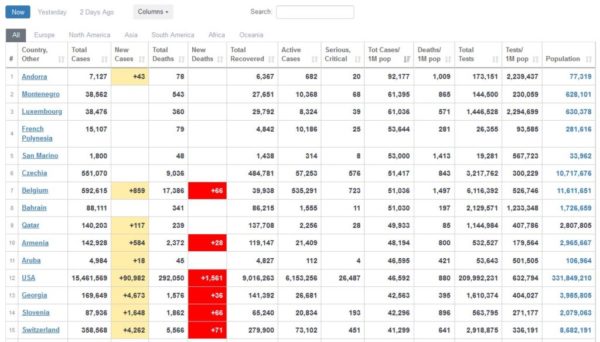 The U.S. climbed from seventh to sixth place this week in COVID deaths per 100,000 population, while at the same time reflecting the worldwide trend of steady increases.  This week the U.S. hit a new high of 86.71 COVID deaths per 100K compared to 81.57 last week and 78.49 the week before. (Mortality chart from Johns Hopkins University). 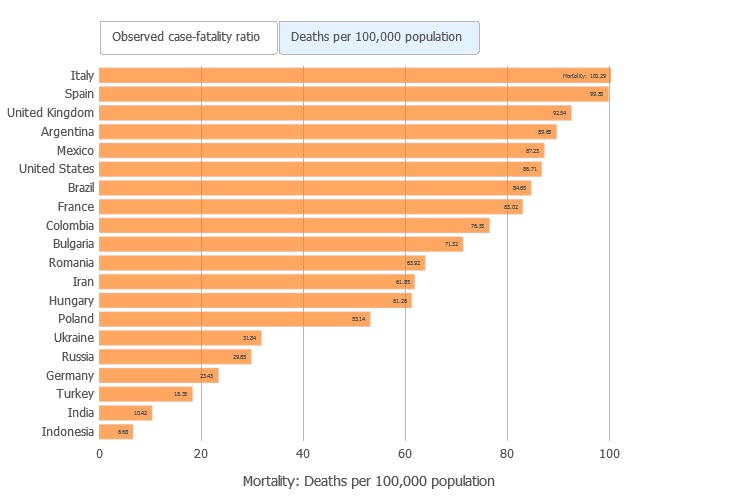 Overall trends in the United States since April 1 are summarized in the charts below from the COVID Tracking Project. Note in each case single day records for seven-day averages were set across the board. 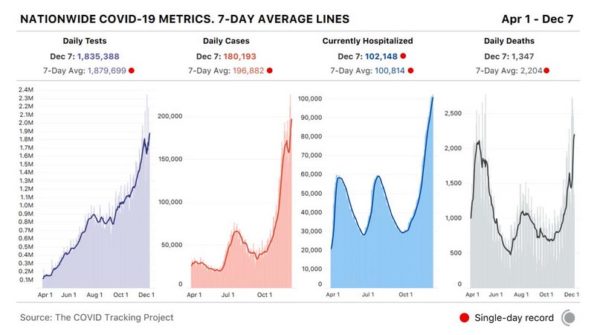 Statewide we continue to set new records, as the virus rages across Washington. The most recent (Dec. 6) state overview from the Washington Department of Health (DOH) shows confirmed cases at 184,404, a seven-day gain of more than 20,000 (equal to roughly half the total population of Edmonds) from last week’s total of 162,700. That’s more than 3,000 newly-infected Washingtonians per day, more than double the population of Woodway. Deaths have now reached 2,941, a gain of more than two hundred from last week’s death count of 2,703. Total tests administered now stands at more than 3 million.

Note that the Washington Department of Health continues to experience backlogs with data posting, and while these will affect reported numbers this week, they anticipate resolving these issues soon. We will continue to report the posted data in our weekly summaries, but caution our readers that some numbers will change in the upcoming weeks as the issues at DOH are resolved and they true-up the figures. 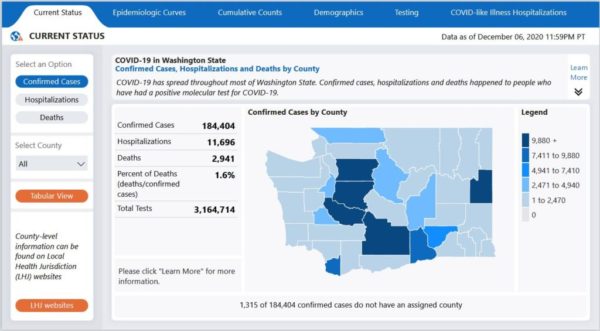 The skyrocketing daily new case counts (as of Dec. 6) for Washington state show a steady upward trend, despite some daily aberrations. (see the interactive chart for Washington State on the Johns Hopkins website here).

This record surge is further reflected in the Dec. 6 case rate of 436.1 (cases per 100K population, two-week rolling average) up a sobering 78.9 points from the previous week’s figure of 357.2 and putting the state goal of 25 (which we actually achieved as recently as March) increasingly out of reach. 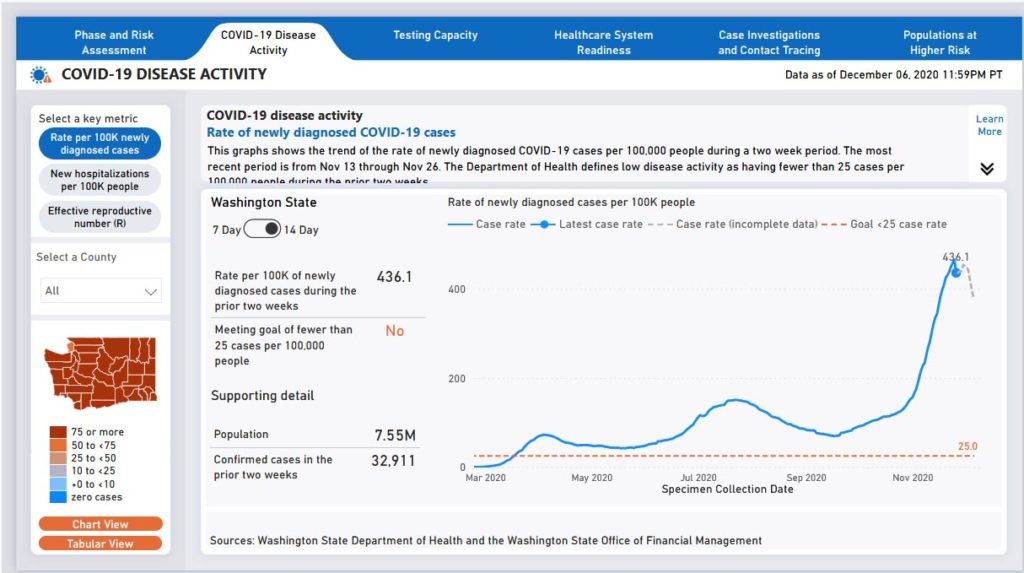 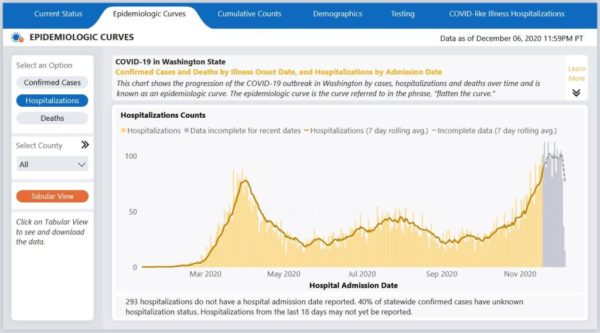 Testing activity is on the rise in Washington state with unprecedented numbers of Washingtonians seeking tests in the lead-up to the holidays. The rising positivity rate, however, is yet another grim indicator of the current surge in coronavirus infections. 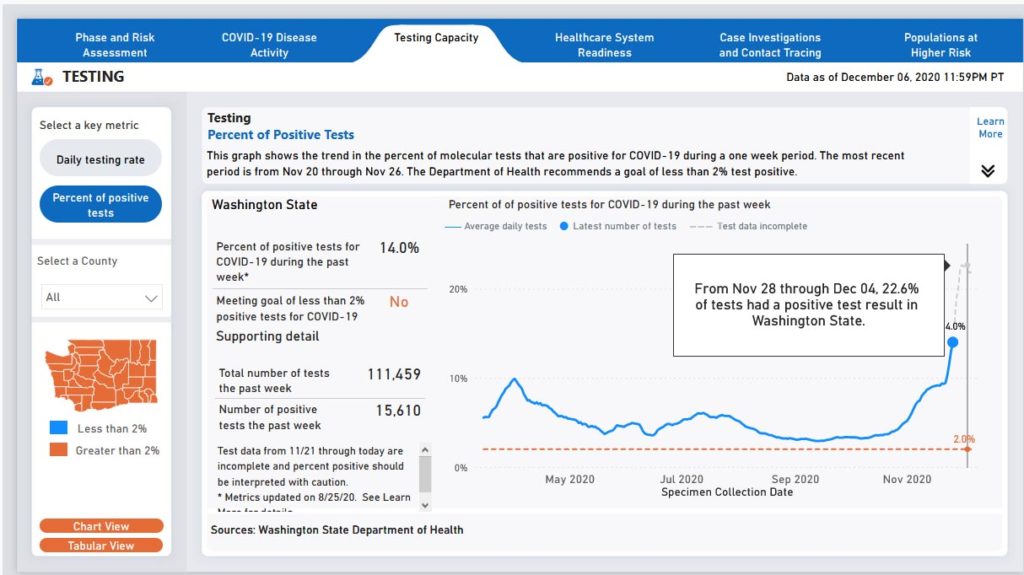 While the map below shows the county-by-county status of reopening under the Safe Start program announced by Gov. Inslee on May 31, more recent restrictions have rendered these guidelines mostly obsolete by mandating renewed shutdowns and other measures. The table to the left of the map, however, provides a quick summary of the latest numbers and critical metrics, some of which are reported in more detail above. 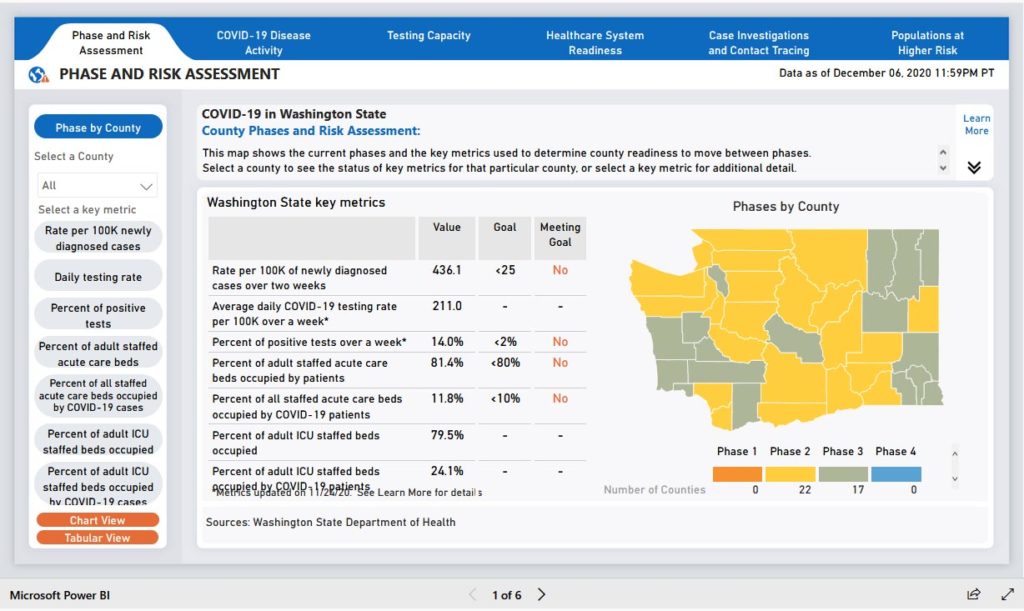 State demographic patterns continue unchanged, with the most recent report following the familiar pattern of most infections among younger people, and most hospitalizations and deaths in older populations.  With those more than 80 years old comprising a mere 4 percent of cases but at the same time more than half the COVID-related deaths, early indications are that people 65 and over will be among the first groups to receive the vaccine once distribution begins. 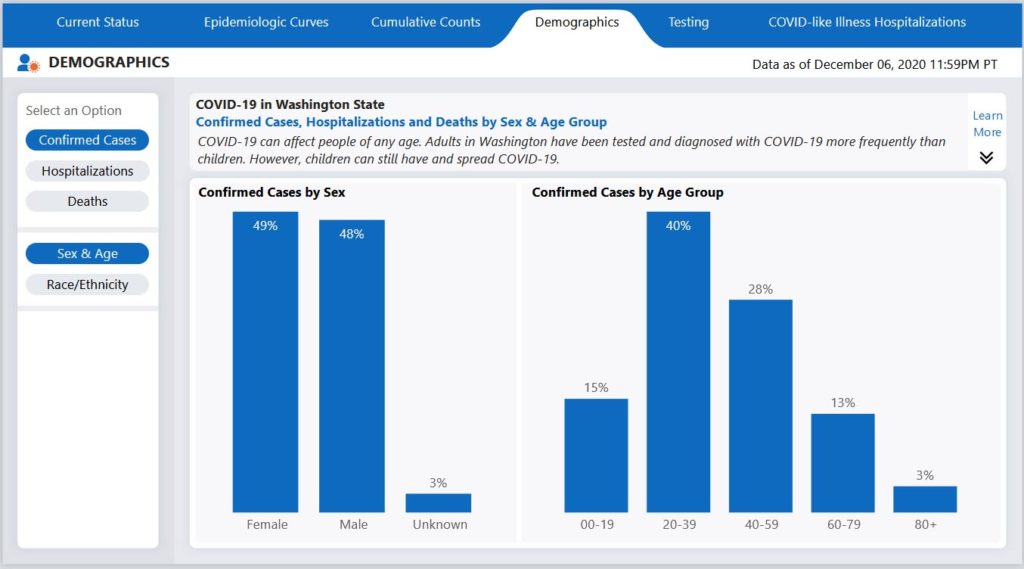 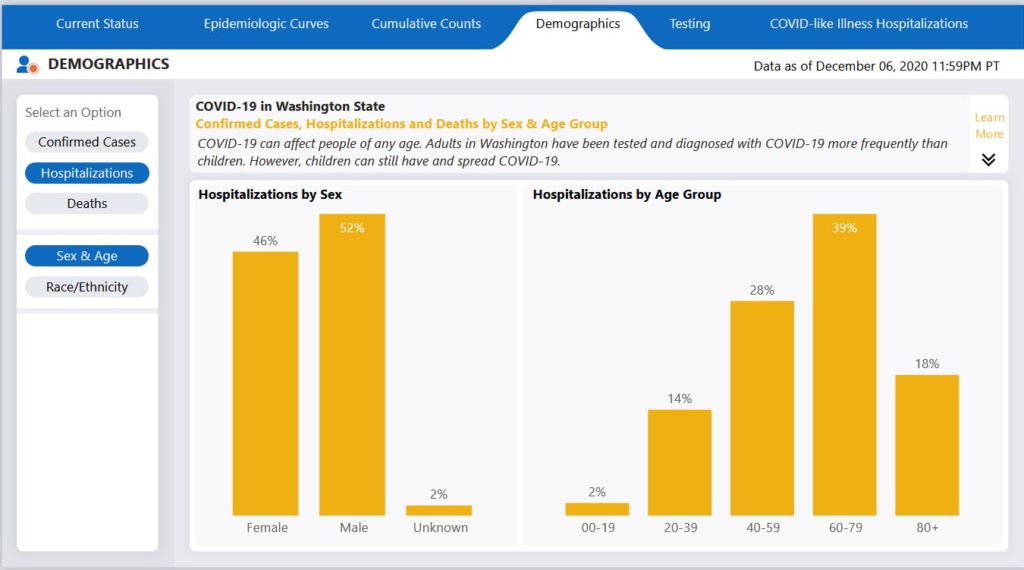 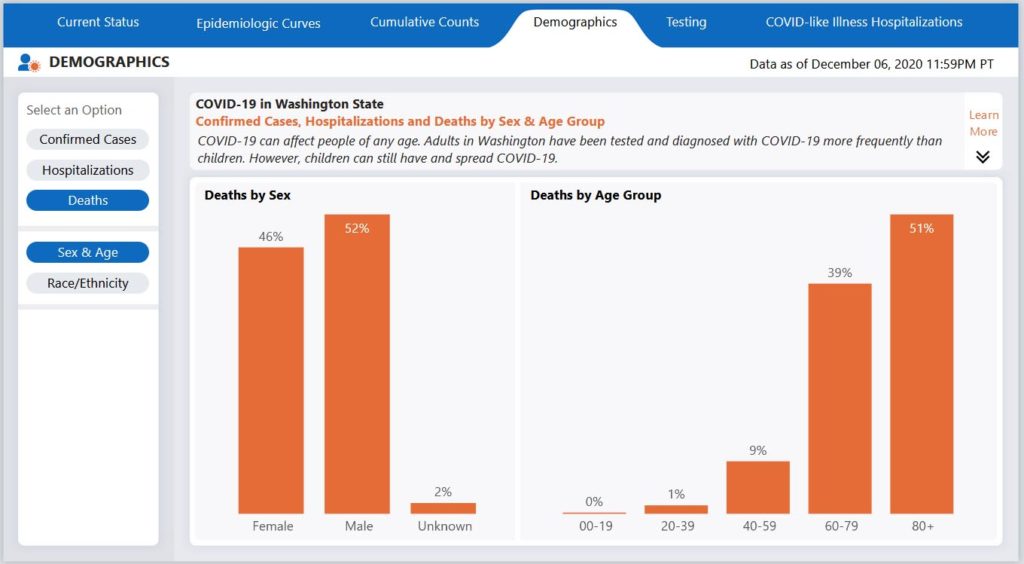 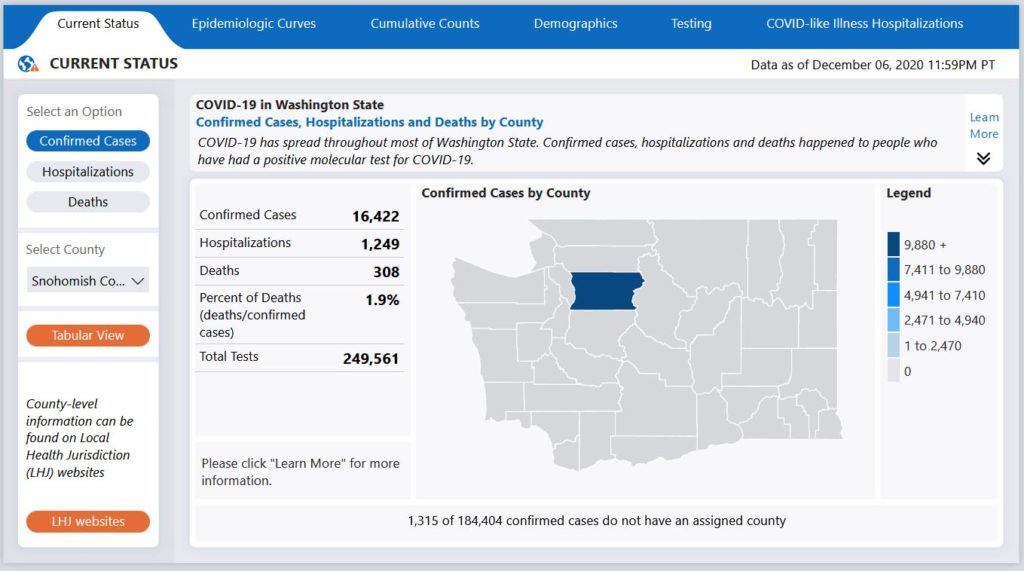 The Nov. 28 Snohomish County daily new case count continues to climb into record territory as the following two charts illustrate, surpassing previous counts and showing no sign of letting up. The first chart from DOH indicates incomplete data with grey bars. The second chart from the Snohomish Health District provides daily numbers for the entire record-keeping period, but as with DOH the most recent data are still being finalized. 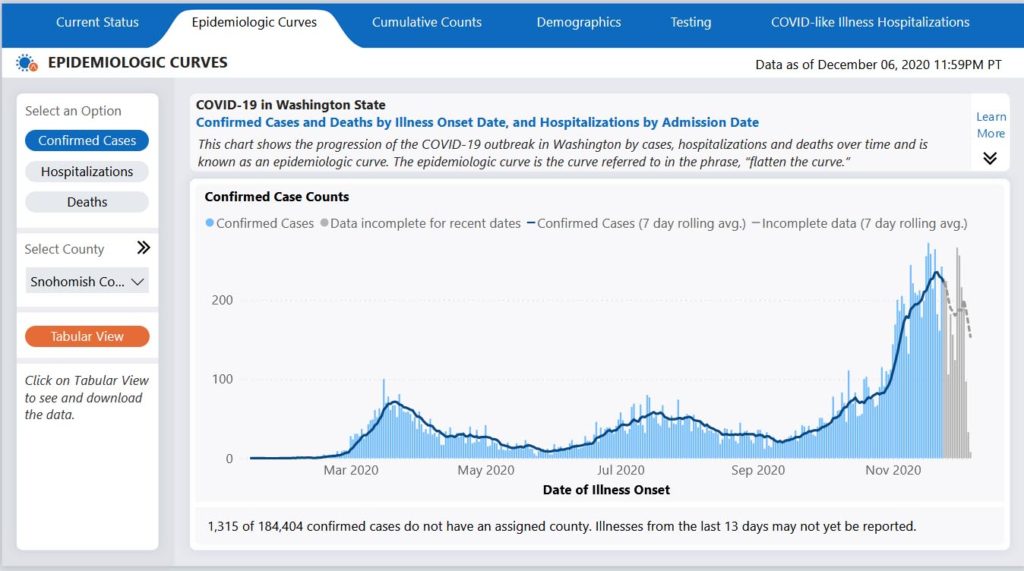 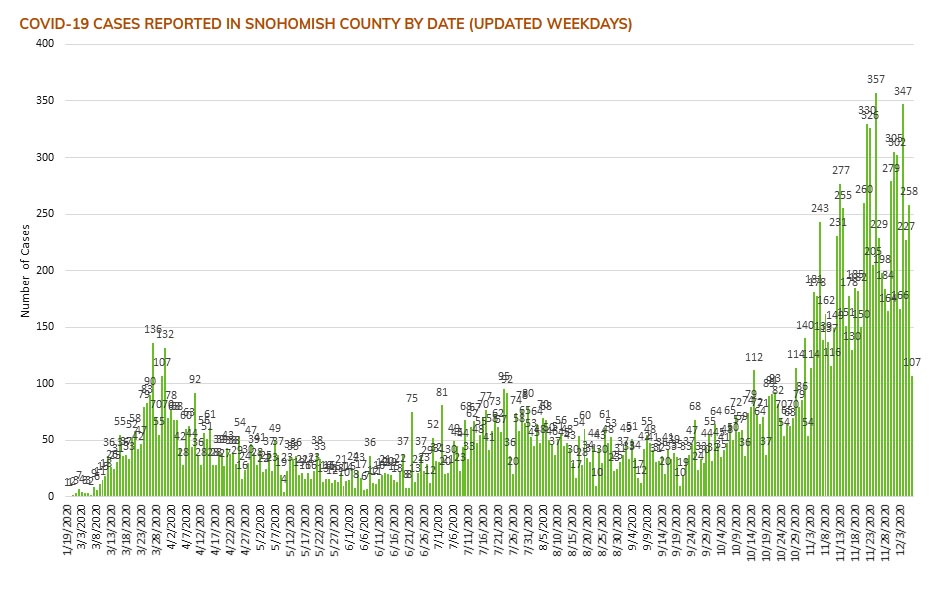 Trends in critical county measures over time (total cases, recovered cases and active cases as of Nov. 30) continue their climb into record territory, as the curves for total and active cases increase exponentially. 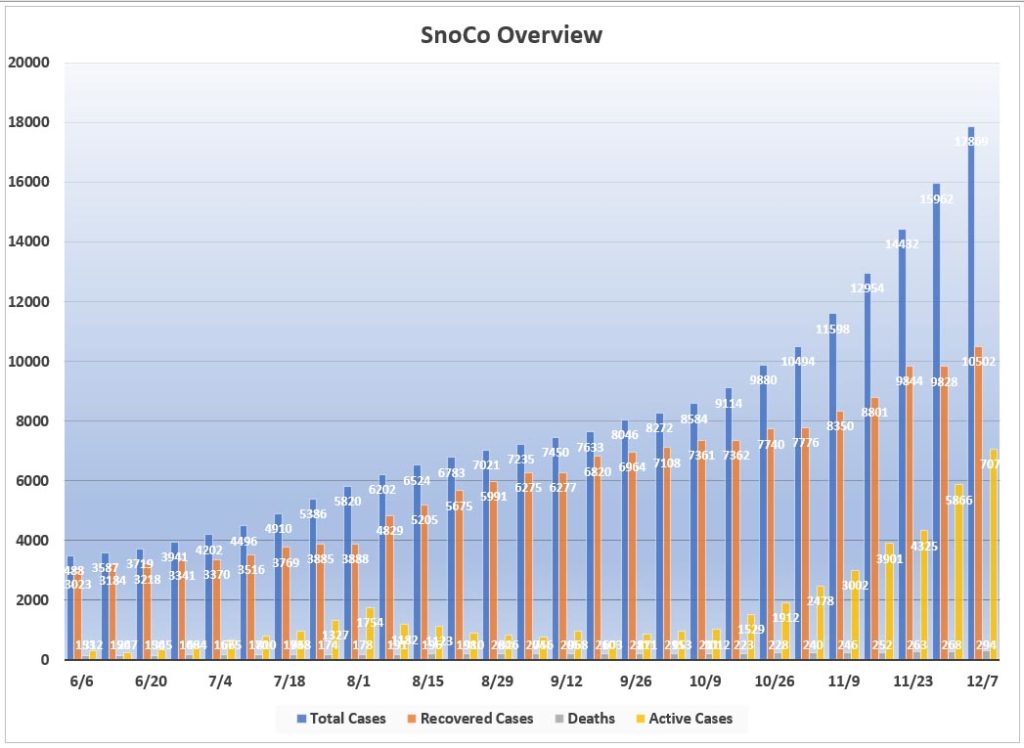 The two-week rolling average case rate per 100,000 chart from the Snohomish Health District continues the sharp gains of the past 30 days, standing at 428, a gain of 60 points from last week’s record high of 368. 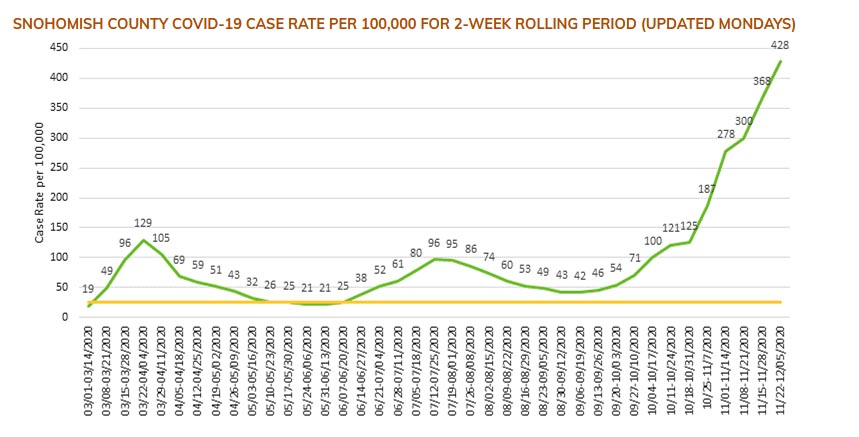 Mortality trends in Snohomish County also continued their steady climb, as an average of four of our neighbors died of COVID each day this past week. 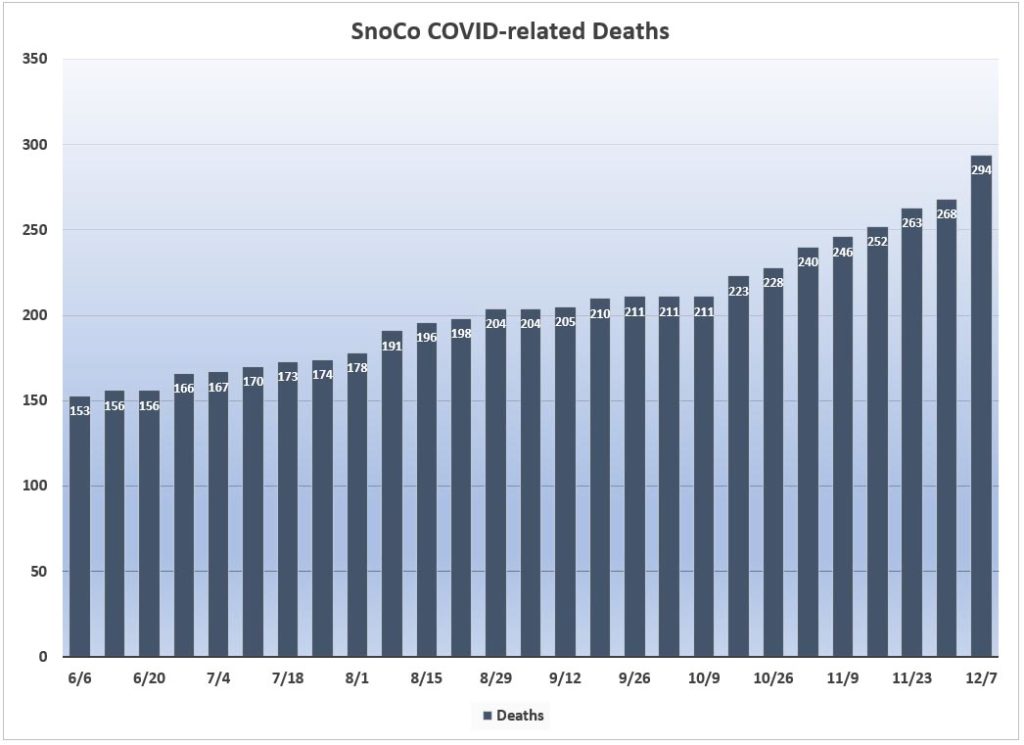 The latest numbers on deaths at the county level stretching back to March are reported in the charts and tables below from the Snohomish Health District (compare these with the above chart). 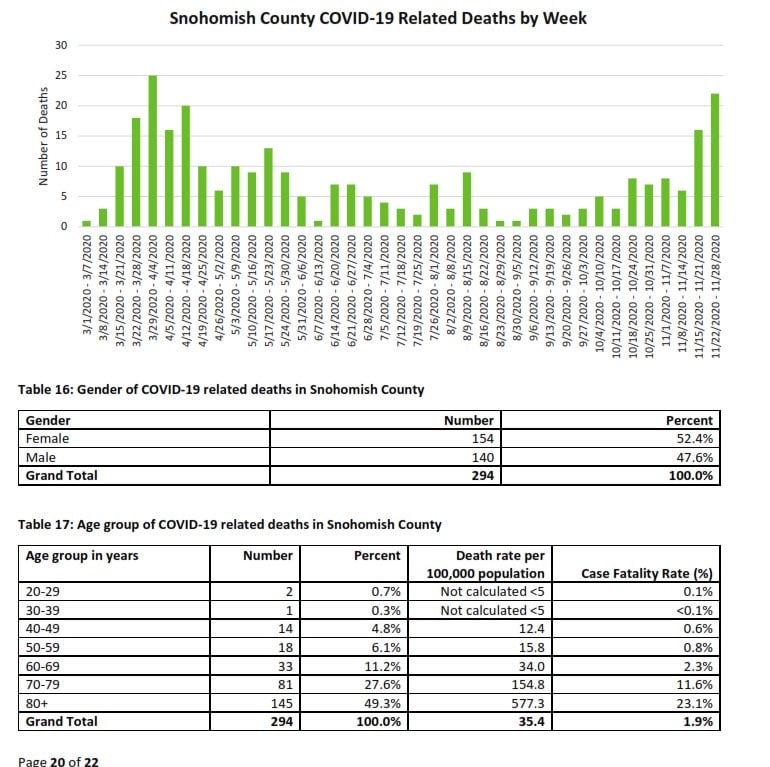 The testing activity table (weekly numbers) and chart (rolling average) from the Snohomish Health District is the same as previously reported (numbers through Nov. 14) due to issues with processing data at the county level (read more here). We include it again here for reference. 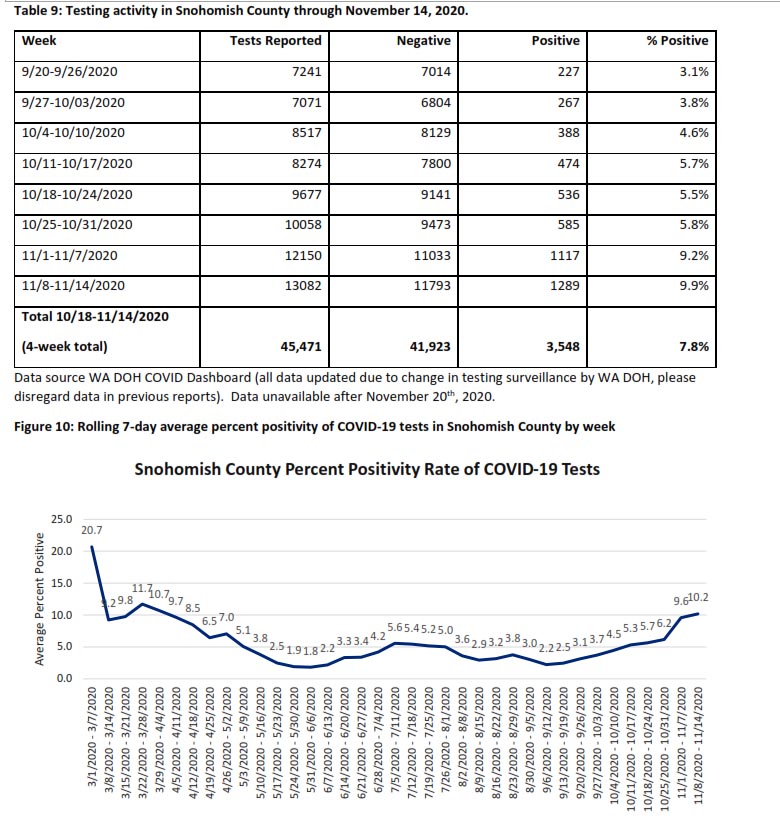 Note: With the exception of death numbers, these data are taken from the most recent updates from the Snohomish Health District Snapshots and Reports web page. As data are verified, occasional true-ups are made in the interest of accuracy and these may result in changes to previously posted numbers.  Verified death numbers lag by a week, and are taken from the  Dec. 8 COVID-19 Weekly Update report from the Snohomish Health District. Because these are coming from two different sources, where necessary figures have been interpolated for clarity.

Critical metrics (total cases, recovered cases, deaths, and active cases) for our home cities provide grim testament to the fact that the pandemic has come home to roost. Note particularly the reflection of national and worldwide trends, as total cases and active cases continues their exponential increases in our own backyards, while recoveries lag behind. 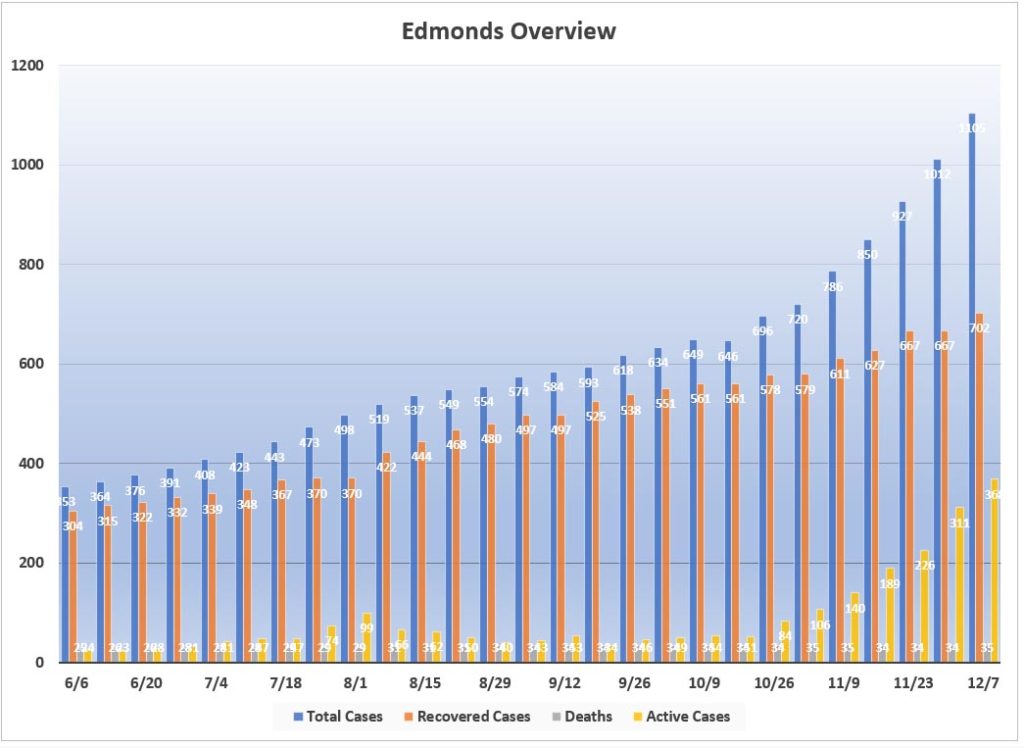 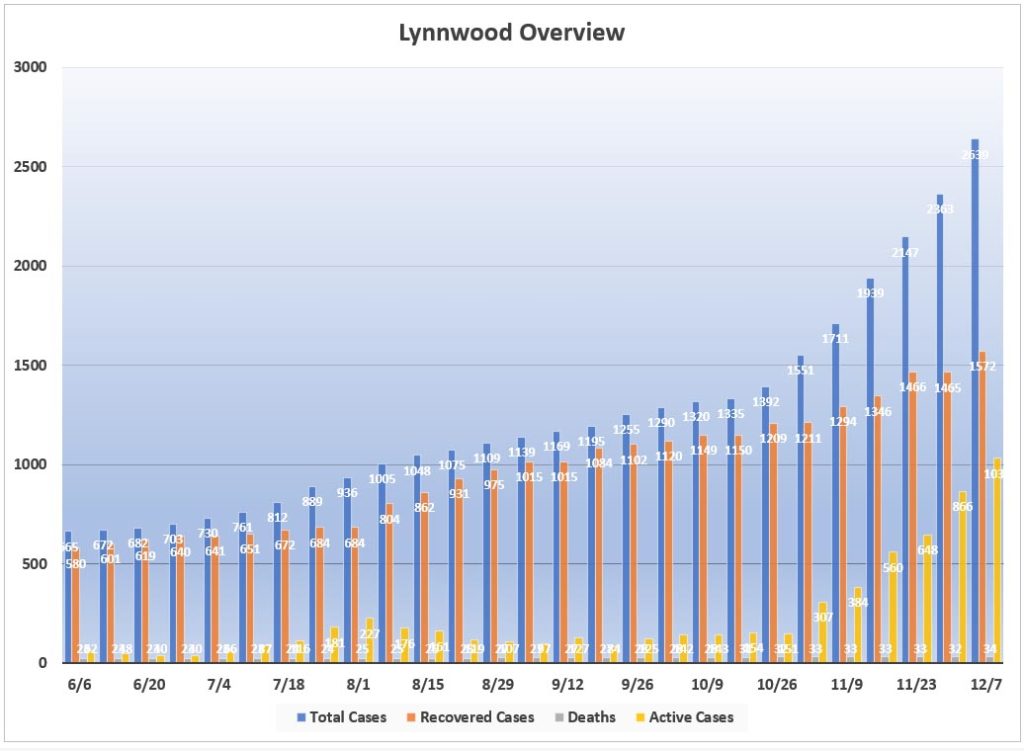 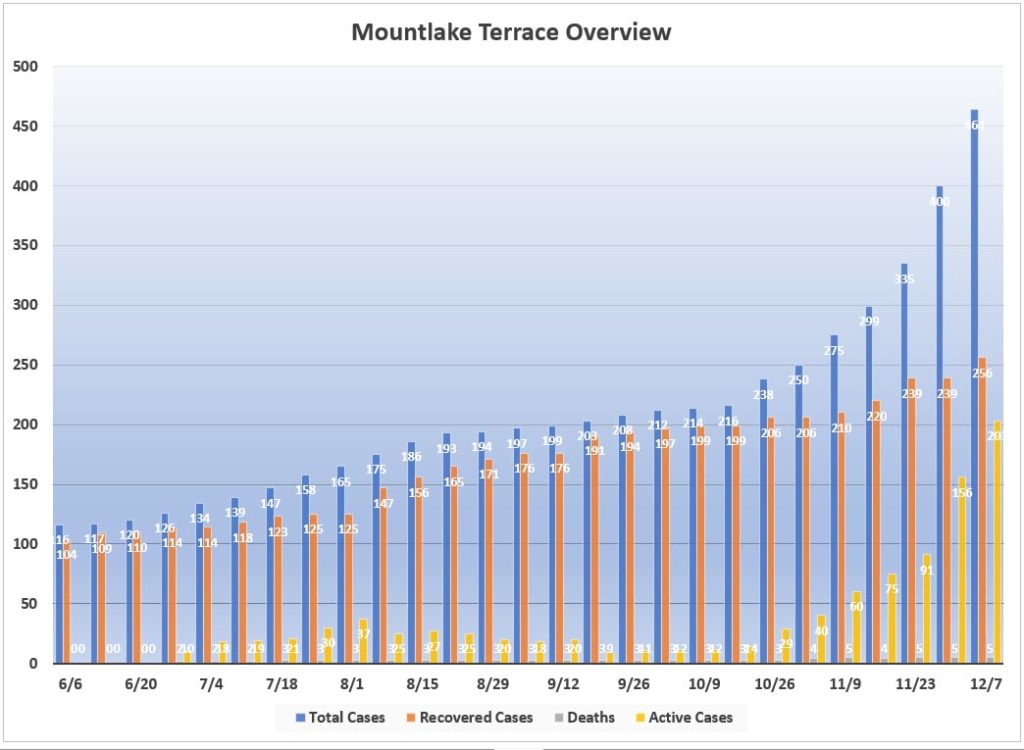