While the U.S. and other nations make steady but incremental progress in ironing out the many startup wrinkles bedeviling efforts to get vaccine to an increasingly anxious and frustrated public, the coronavirus is not sitting still. Capitalizing on its short generation time and dizzying ability to spread, the virus has already mutated into several new, more virulent and possibly vaccine-resistant strains, pitting health experts, vaccine manufacturers and government officials in an all-out race to slow the rate of viral mutation and contain the spread.

Once the virus takes hold, the viral particles enter and hijack our cells by reprogramming the cells’ genetic code to turn them into virus factories that churn out billions of viral particles. As more virus is produced, occasional “mistakes” occur in the replication process that alter the genetic code of an individual virus.  These are mutations. Each time this happens, it’s a roll of the dice whether the mutation is benign or confers an advantage to the virus, such as increased ability to spread, vaccine resistance or ability to produce more severe symptoms. Mutations that confer an advantage to the virus will tend to get fixed in the viral population, since the ones carrying the mutation will be better at infecting more cells, reproducing and thereby contributing more of their genetic “descendants” to the overall viral population. And with a generation time measured in minutes, this can happen very quickly.

One variant, the so-called U.K. strain that emerged last month in southern England, is so contagious that it quickly became the dominant form in the U.K. and is in the process of spreading quickly to other countries. As of Monday, this strain has been discovered in 36 U.S states, with experts predicting it will become the dominant form here in the next six to 14 weeks. Other variants — including the Brazilian and South African strains — have also gained a toehold in the U.S., showing up in Minnesota, South Carolina and Maryland.

“The virus can’t mutate if it can’t replicate,” said Dr. Anthony Fauci Monday, as he stressed the vital importance of vaccinating and doubling down on masking, hand-washing and avoiding all unnecessary contact with others, especially in light of the new variants. He went on to stress that casual contact has become much more risky with the emergence of the new strains, and what may have been an acceptable level of contact last month is far more dangerous today.

As one effort toward this, the Biden administration’s mask mandate for travelers went into effect on Tuesday, requiring masks on planes, trains, buses and even rideshares.

Vaccination efforts nationwide continue to be hampered by short supplies and high demand, forcing many vaccination sites to close and cancel appointments due to lack of adequate vaccine supply. Making matters worse this week, the winter storms hammering much of the nation have not only forced many vaccination centers to close, but have disrupted supply efforts by keeping trucks off the road and many vaccine-laden cargo planes on the ground.

Here in Washington, the latest progress toward Gov. Jay Inslee’s goal of administering 45,000 vaccine doses a day remains short of the mark, with 28,115 doses as of Jan. 30, up from 23,960 the week before. Total vaccine doses administered statewide now stands just shy of 730,000.

But supply continues to be the sticking point.

In a Tuesday press briefing, Snohomish County officials county officials made it clear that the infrastructure to deliver up to 50,000 shots a week is in place, but with the combination of short supplies and distribution issues they have been able to administer only a fraction of that.

The county has set up four drive-through vaccination sites in Snohomish County –, at the Arlington Airport, Paine Field, Edmonds College and the Monroe State Fairgrounds. For more information and to check on availability for the drive-thru sites, click here.

A list of all vaccination sites statewide is available here.

Use the state’s phase finder tool at http://findyourphasewa.org to determine your eligibility to be vaccinated. Once you become eligible, appointments at the various clinics can be set up at the appointment booking website.

But despite efforts to increase availability, people who try to set up appointments continue to experience difficulties as many sites are booked out. As new clinics and vaccination sites open, the hope is all Washingtonians who want to be vaccinated can do so by mid-year. Officials continue to advise people to be patient as they scramble to add more clinics and work to increase supplies.

Check this report’s “Washington state situation” section below to see details of our progress with vaccinations.

In other developments, the new public health measures outlined in Gov. Inslee’s Healthy Washington plan continue. The plan divides the state into multi-county regions, all of which were initially in Phase 1, the most restrictive category. Unlike the former Safe Start program, these groups do not need to apply to advance to a less restrictive stage – this is now determined by data collected and compiled by the State Department of Health.  As of this week, two regions – Puget Sound and West – have been approved to move into Phase 2. Details of how the guidelines apply to various businesses and other groups are available here.  See more in the Washington State Situation section of this report below.

To help you, our readers, stay updated on the continuing battle with the pandemic, here once again are the latest numbers, charts, and statistics from the world to our own backyards.

This week’s global COVID case count as reported by Johns Hopkins University shows just shy of 4 million additional cases, pushing the count since the start of the pandemic a year ago past the 100 million milestone, while adding 100,000 new COVID deaths. The United States case count dropped for the third week in a row, with 1 million new cases added, down from 1.2 million last week. The U.S. total now stands at more than 26.3 million since the start of the pandemic, with 445,000 deaths. Despite the second week of slowing increases, the U.S. continues to lead the world in both these measures. 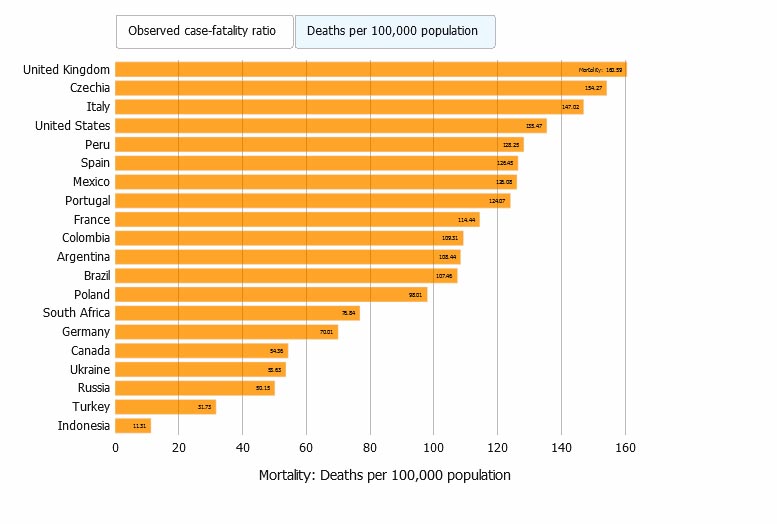 Overall trends since April 2020 in the United States are summarized in the charts below from the COVID Tracking Project.  Note the recent encouraging declines in new cases, hospitalizations and deaths. 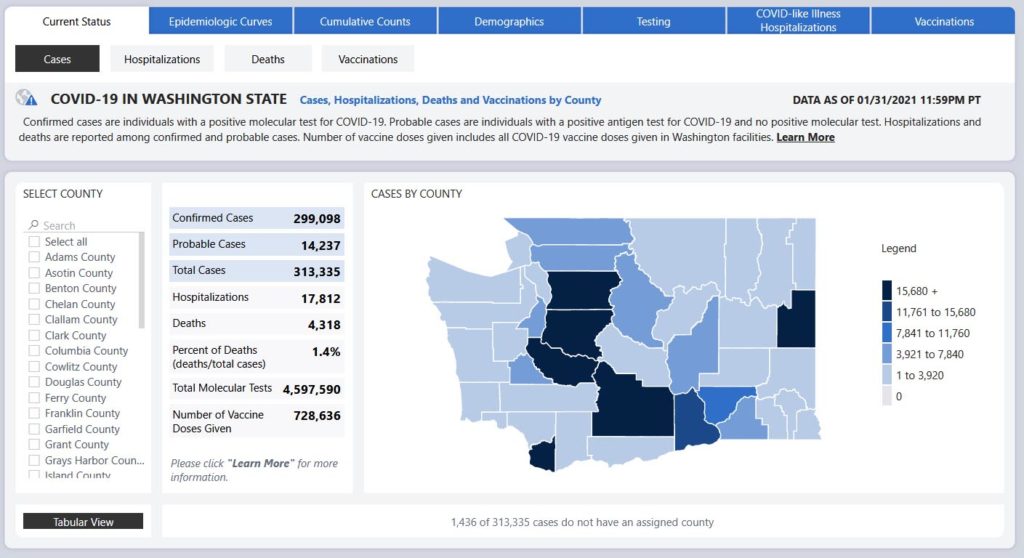 The statewide daily new case count as of Jan. 31 continues to back off from the Dec. 11 high of 4,111 — as shown in this chart from DOH — and continues the declining trend begun two weeks ago. Note that here – as with all DOH charts – the grey bars indicate data that are incomplete and still being tabulated. 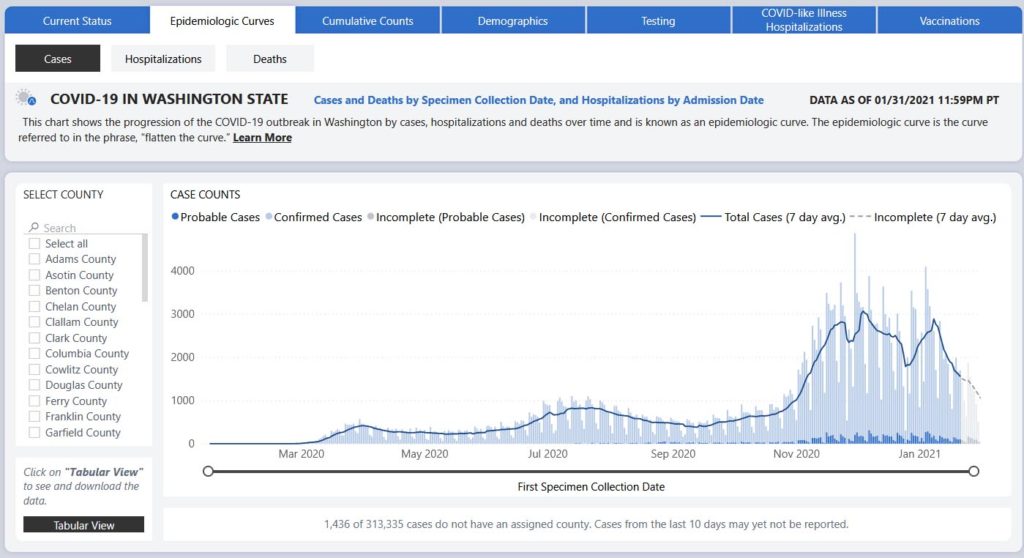 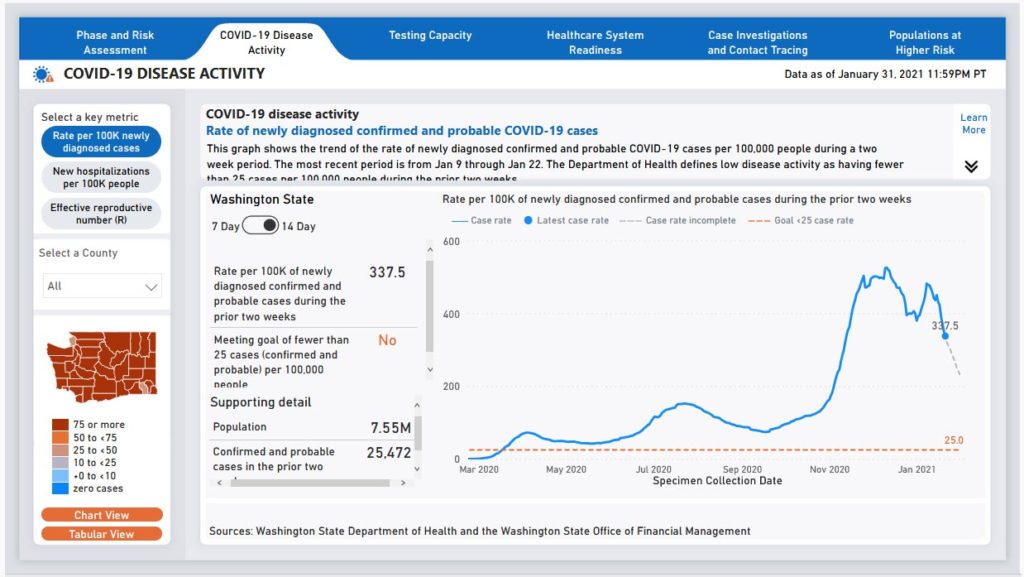 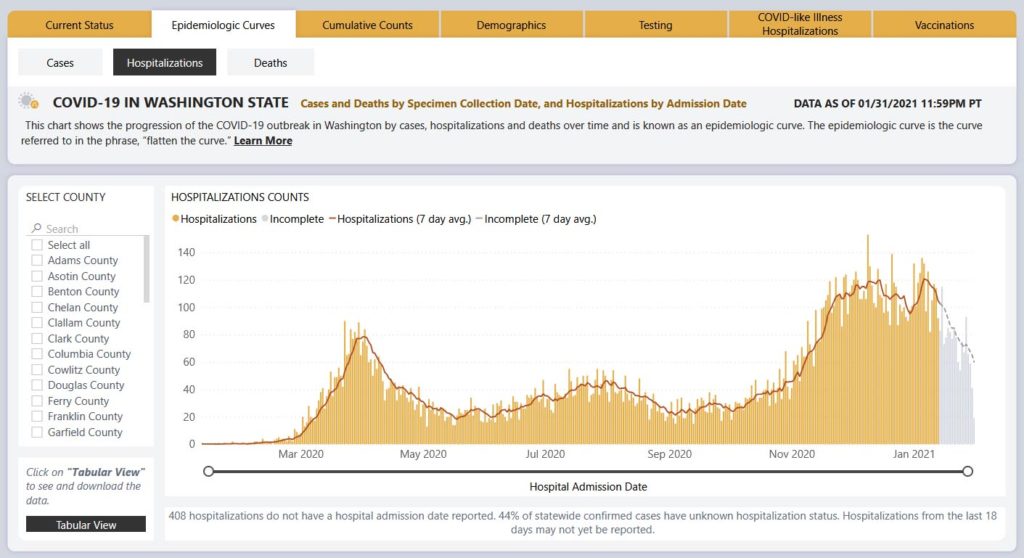 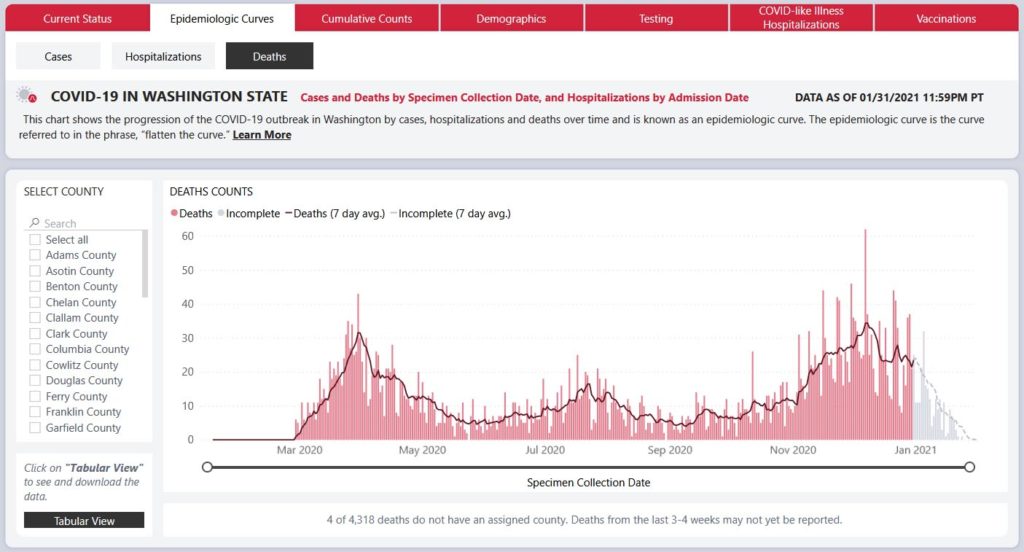 The latest (Feb. 1) Roadmap To Recovery report shows two regions – Puget Sound and West – moving into Phase 2.  The rest of the state remains in Phase 1.

Four metrics are considered in determining the phase for each region:

Snohomish County is grouped into the Puget Sound region along with King and Pierce counties.

The table below shows how the various regions currently stack up. 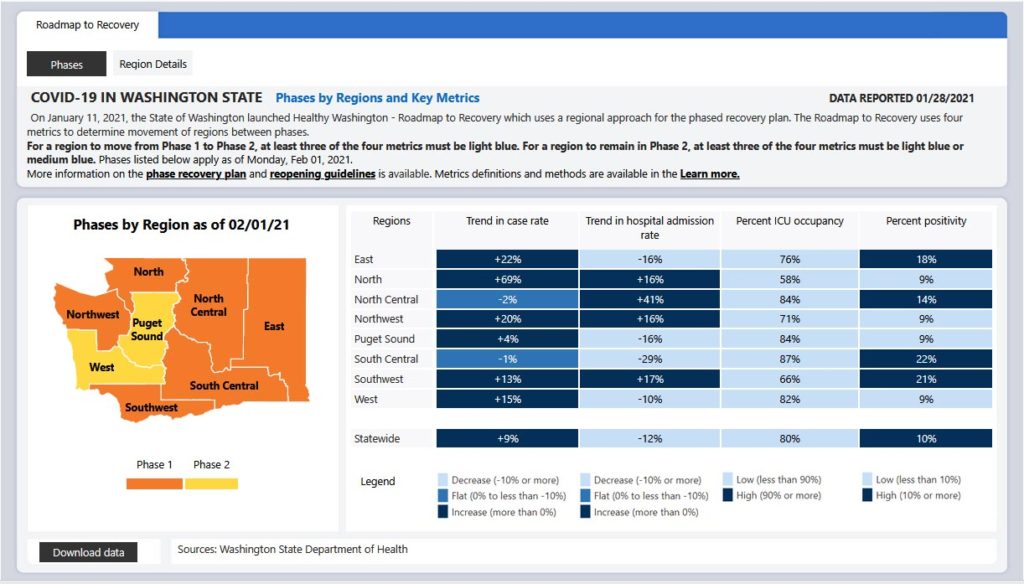 Vaccination activity continues to ramp up as Washington works to overcome initial startup challenges. This week’s seven-day average jumped to 28,115 doses per day, up almost 5,000 from last week’s report. Statewide, more than three quarters of a million doses have been administered to date, or 7.88% of Washington’s population, up from 5.55% last week. 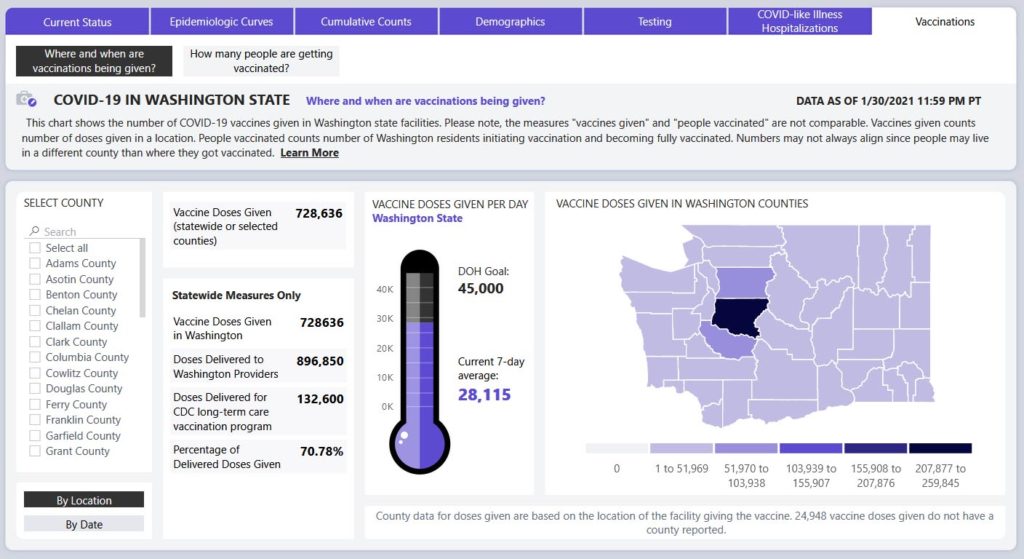 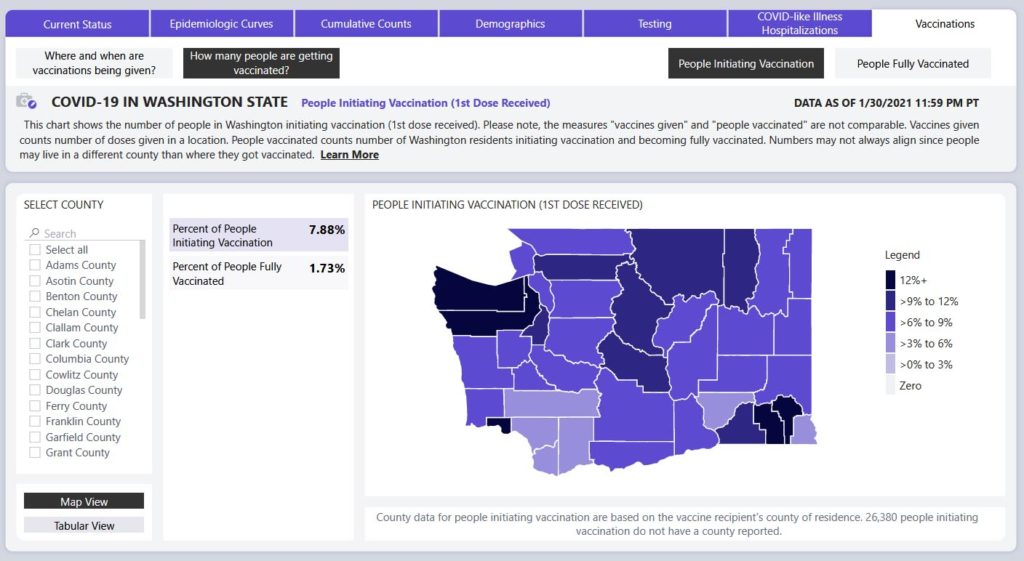 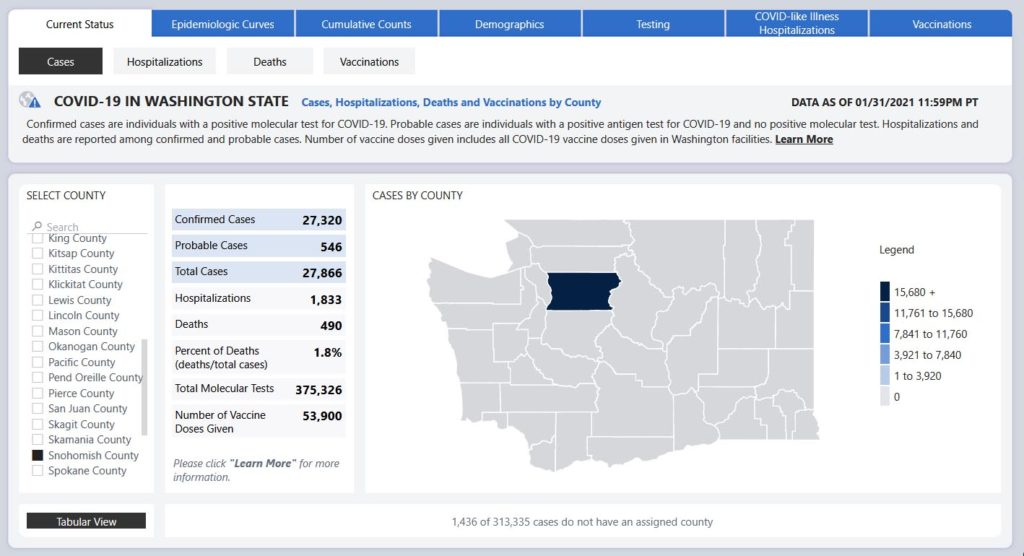 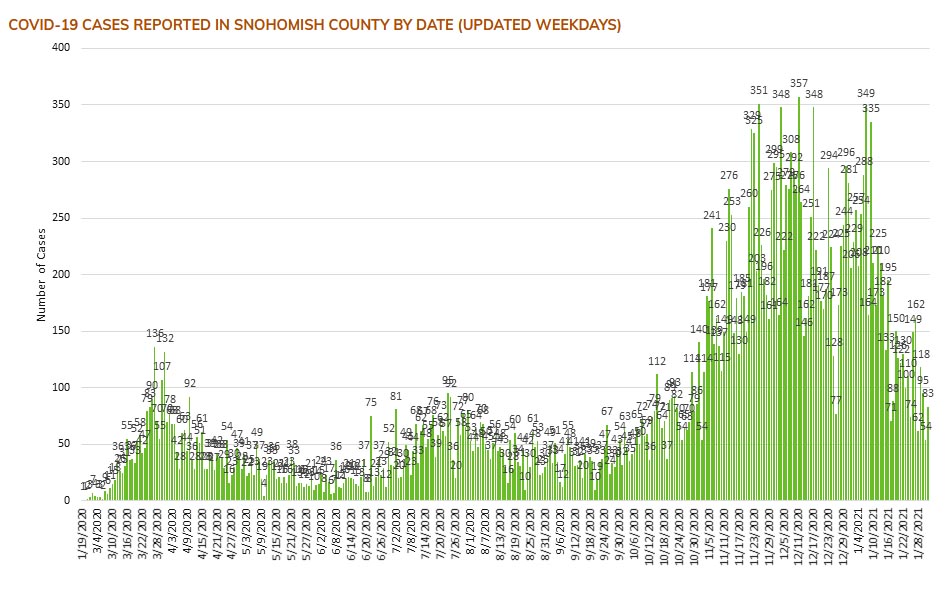 Vaccination activity in Snohomish County shows 53,720 first doses and 8,439 second doses administered as of Feb. 1. In a Tuesday press briefing, county officials made it clear that the infrastructure to deliver up to 50,000 shots a week is in place, but with the combination of short supplies and distribution issues they have been able to administer only a fraction of that. More information on how the program works and how to get vaccinated is available here. 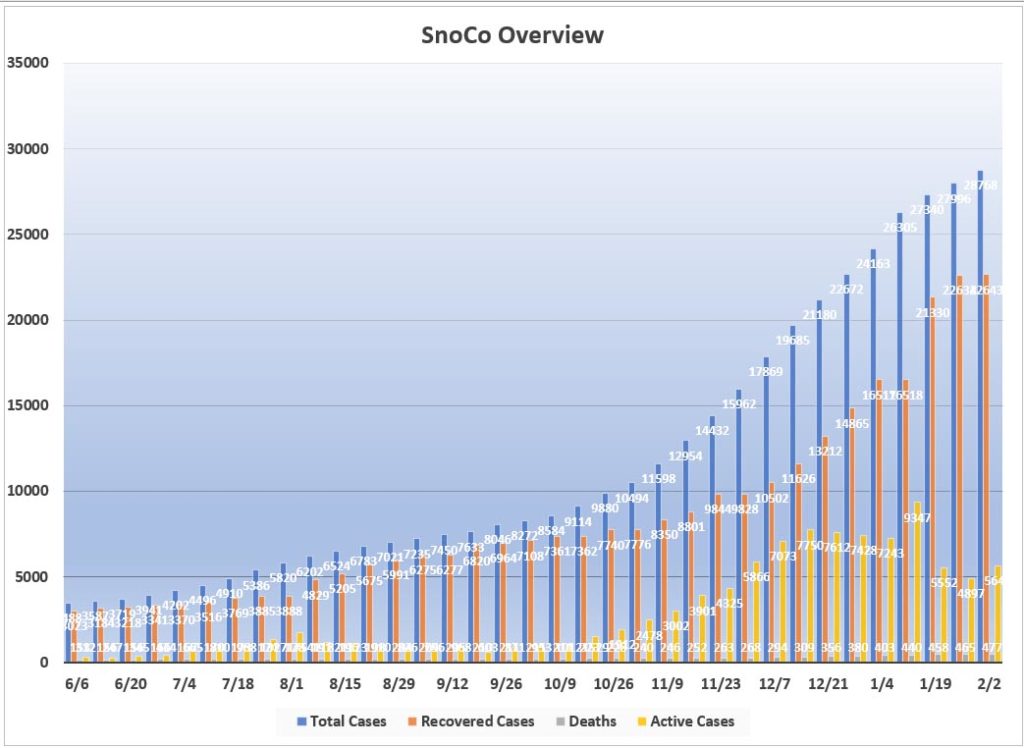 The two-week rolling average case rate per 100,000 from the Snohomish Health District is down significantly for the second week in a row, showing 184 253 new cases per 100K down from 249 last week. 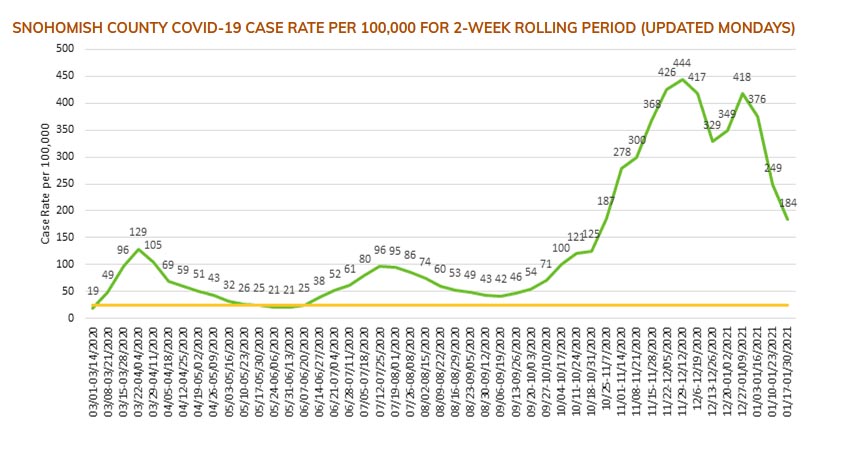 The mortality trend for Snohomish County (numbers through 1/23) continues to level off from the steep increases of last month. 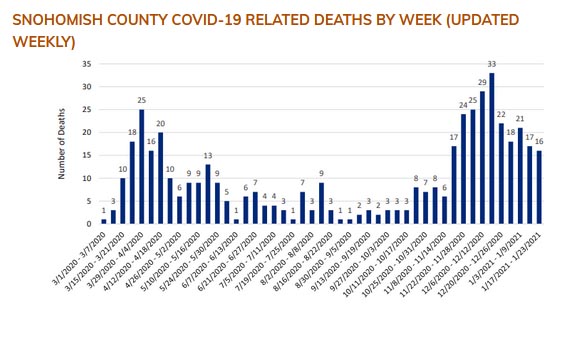 Critical metrics (total cases, recovered cases, deaths, and active cases) for our home cities show a falling rate of increase for total cases, accompanied by a marked upswing in recoveries and a decrease in active cases. 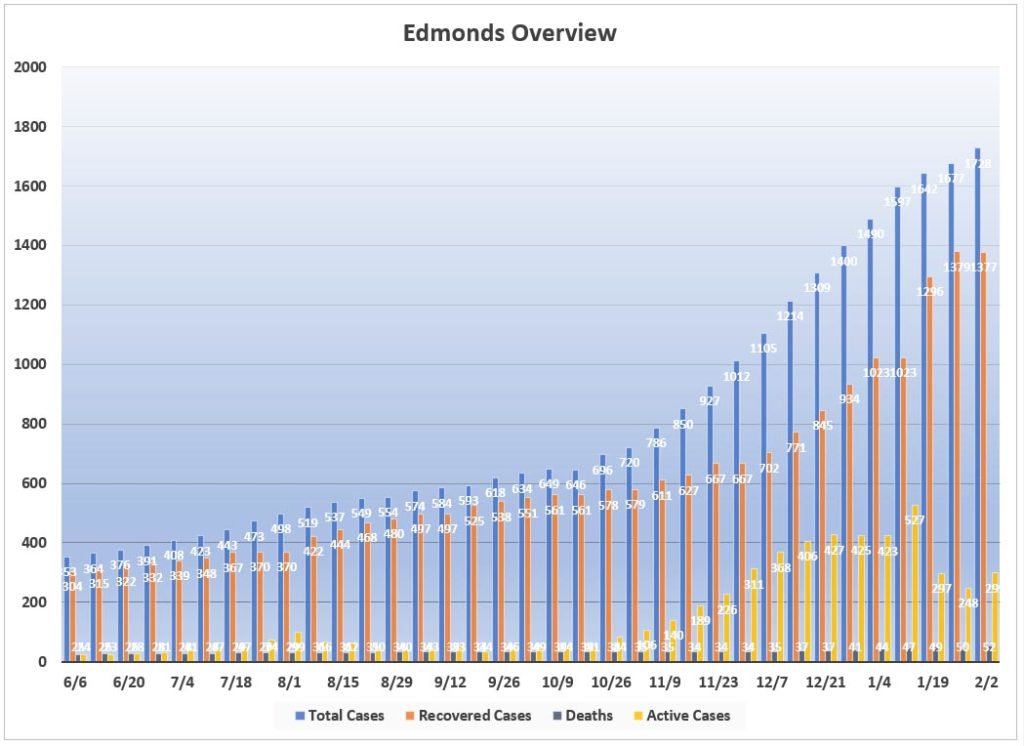 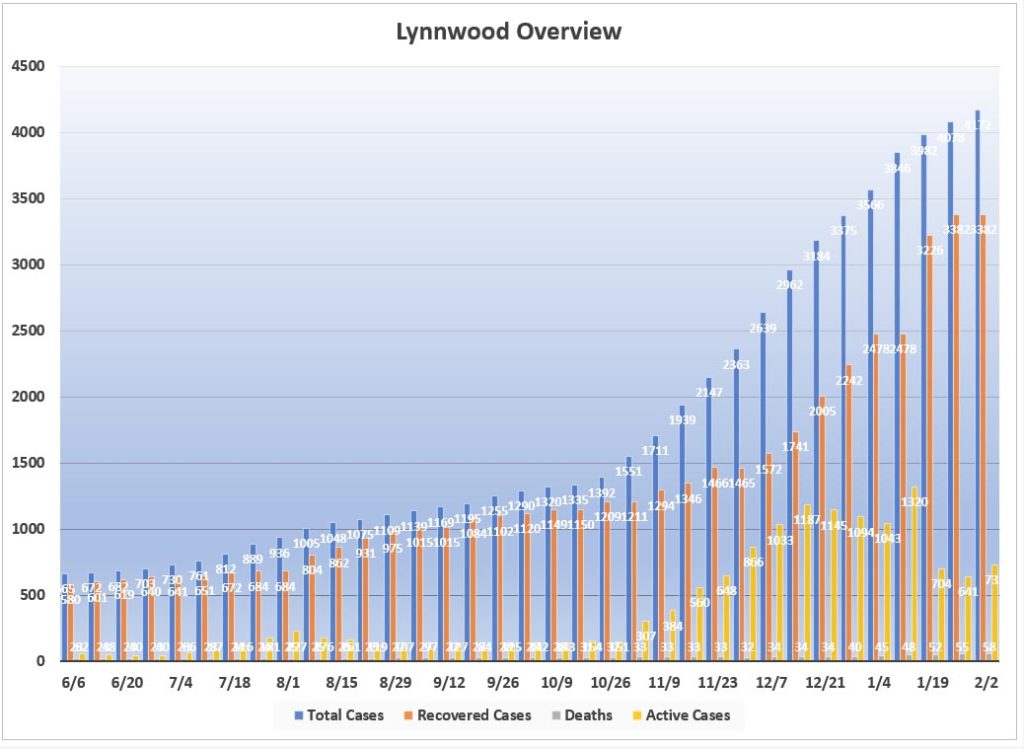 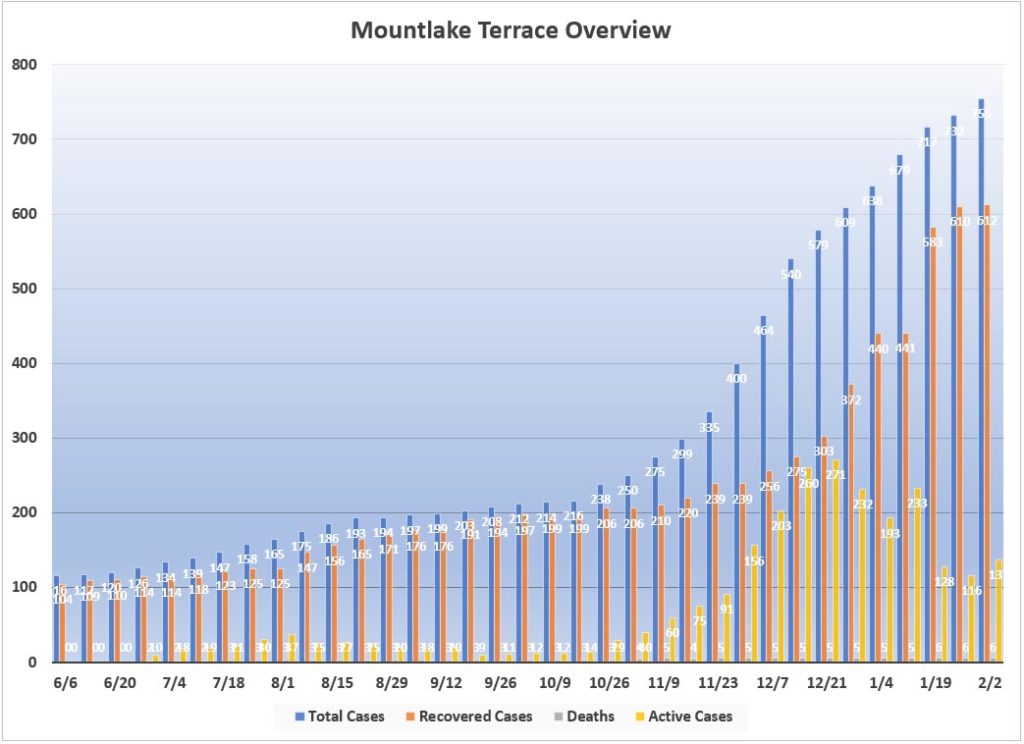 The local numbers summary as of Feb. 2 shows a leveling off of recovered COVID cases at all levels (right hand column), which contributes to driving up the number of active cases.  Note again that because death numbers for individual cities are now reported biweekly, last week’s report used the previous figures as placeholders.  This has been updated in the table below.