Last week ended with the U.S. logging more than a million new cases of COVID-19.  Along with this, there was welcome news that two and potentially three likely highly effective vaccines are on the way, and may be available to the highest risk groups before the end of this year.

Worldwide we start the new week just short of 59 million total cases and 1.4 million deaths since the pandemic began

According to the COVID Tracking Project, in the United States the seven-day average for daily reported cases has almost doubled since November.  Many hospitals systems across the country are overwhelmed with COVID-19 patients, as they run out of beds and warn of staff shortages.  COVID-related weekly U.S. hospitalizations have now surpassed a record 80,000, with deaths last week alone just short of 8500, the highest level since May.

Closer to home, the Washington State Department of Health is strongly urging everyone to limit their holiday celebrations to curtail the spread of the virus.  This means not only limiting gatherings to only immediate household members, but also strongly recommending that anyone with symptoms or close contact with someone who is infected (or suspected to be infected) to get tested now. (Read the latest news and recommendations from Washington State Coronavirus Response here)

To help you, our readers, navigate this sea of information and sort this out for yourselves, here once again are the latest numbers, charts and statistics from the world to our own backyards.

This week’s global count is approaching 59 million cases, an increase of more than 4 million over the past seven days (see our earlier reports from Nov. 16 and Nov. 9 for comparison). The United States added more than 1 million cases last week alone, surpassing the 12 million mark, as it continues to lead the world in sheer numbers of cases. Worldwide deaths are just shy of 1.4 million, with the U.S. (now at more than 257,000 deaths) still comprising almost 20 percent of the global death total while accounting for 4.25 percent of the world population (331 million vs 7.8 billion).

The most recent tabular display of the top 12 nations from the World Health Organization shows similar numbers, the discrepancies due to the updates being taken in different time zones (WHO is based in Europe, and due to time differences the numbers are approximately 10 hours earlier than Johns Hopkins). 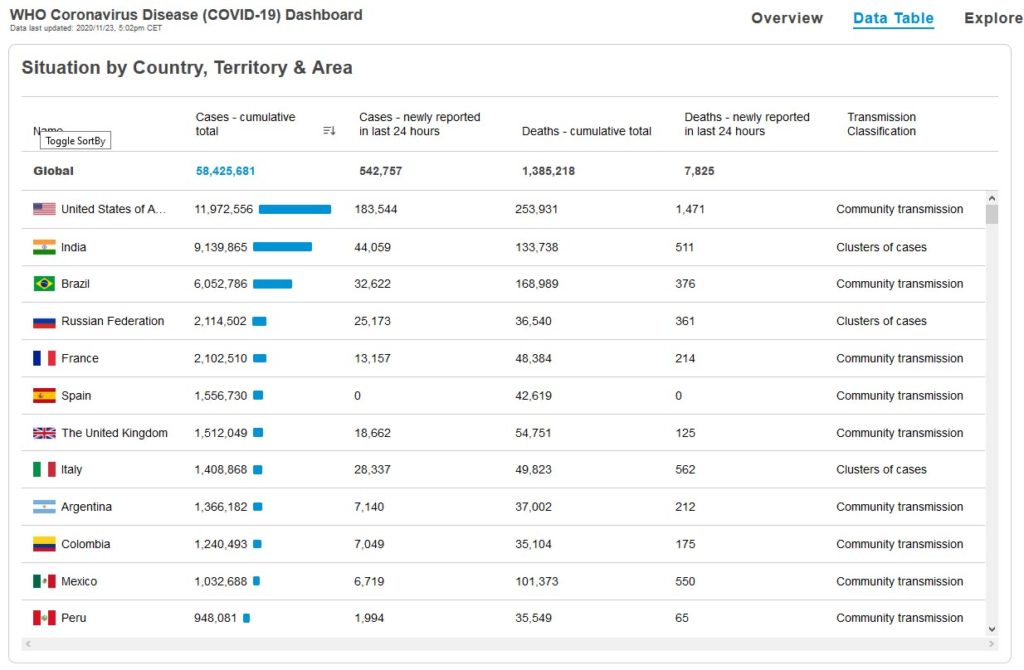 While the U.S. leads the world in overall case numbers, when the field is leveled to reflect cases per one million population the U.S. has jumped into 12th place from 14th last week. Note that all of these nations comprise much smaller samples, so while statistically these countries may show a higher per-capita rate, the small sample size makes comparisons with U.S. dubious at best.  See the complete interactive table where you can rank countries by any of the various metrics here. 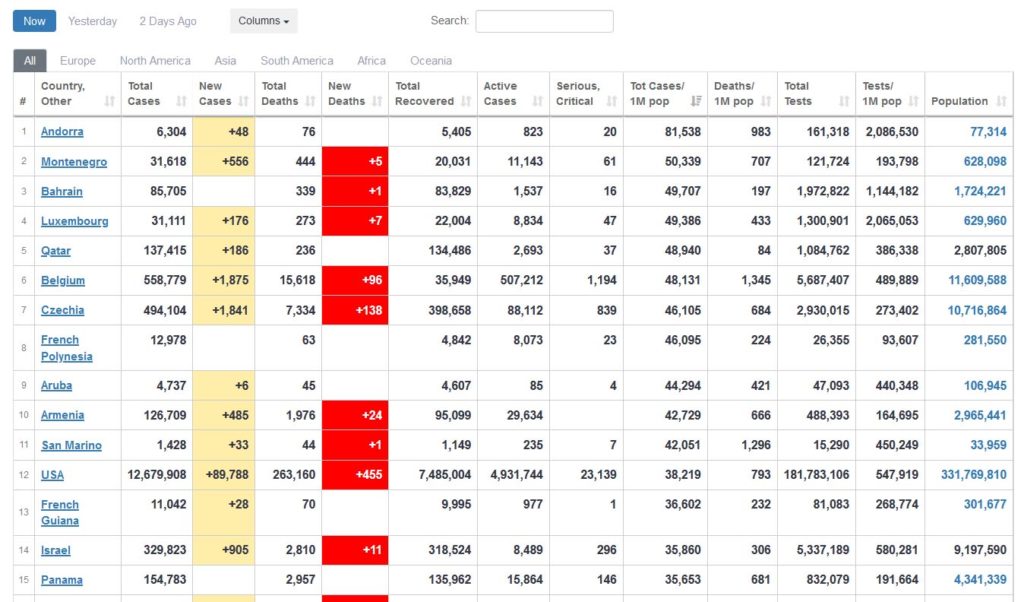 As reflected in the World Health Organization’s regional comparison below, the daily caseload counts appear to be backing off slightly in both Europe and the Americas.

The U.S. dropped from seventh to eighth place this week in COVID deaths per 100,000 population, while at the same time reflecting the worldwide trend of steady increases. This week the U.S. hit 78.49 COVID deaths per 100K compared to 75.26 last week and 72.61 the week before. (Mortality chart from Johns Hopkins University). 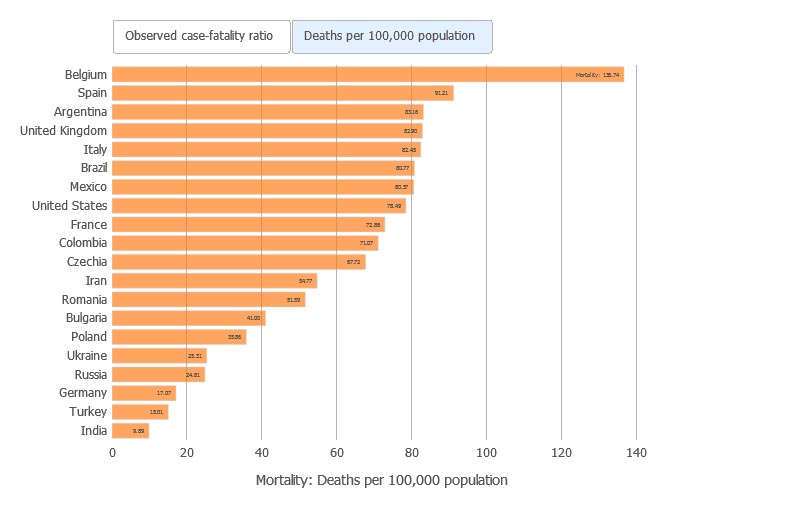 Overall trends in the U.S. are summarized in the charts below from the COVID Tracking Project. While all critical metrics are on the upswing, only deaths have not yet reached record territory.

Statewide, we continue to set new records, with the most recent (Nov. 20) state overview from the Washington Department of Health (DOH) showing confirmed cases at 141,260. That’s 11,220 new cases in the past seven days, more than 1,600 new cases per day. Deaths have now reached 2,619, adding 100 to last week’s total of 2,519. Note that according to the Snohomish Health District, “new cases” is defined as confirmed tests reported to public health.

While testing activity shows 116,272 new tests administered, down from 165,897 last week, the Department of Health has issued a statement explaining that due to unprecedented demand for COVID testing, the data processing system was overwhelmed and the most recent numbers do not reflect the actual numbers of tests administered.

According to the DOH statement, “Our disease reporting system can receive and process approximately 33,000 total results per day. We are currently receiving 30,000 to 50,000 records per day, leading to a backlog. We have been working to expand the system’s capacity to receive additional results in anticipation of a surge, but recent disease growth and the associated testing volumes have outpaced our efforts. Without this pause, we will fall further behind…The backlog of results means that the number of new COVID-19 cases reported the last two days is an undercount and likely does not reflect disease trends.” (Read the full statement here) 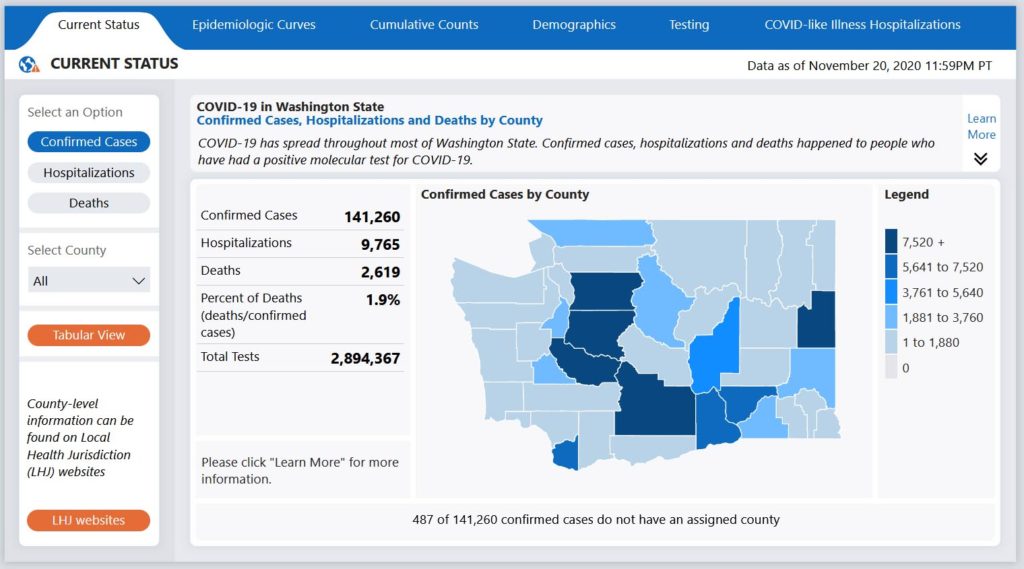 This record surge is further reflected in the Nov. 16 case rate of 333.9 (cases per 100K population, two-week rolling average), up a brutal 99.7 percentage points from the previous week’s figure of 234.3, putting the state goal of 25.0 (which we actually achieved as recently as March) increasingly out of reach and a testament to our state’s staggering increase in viral activity. 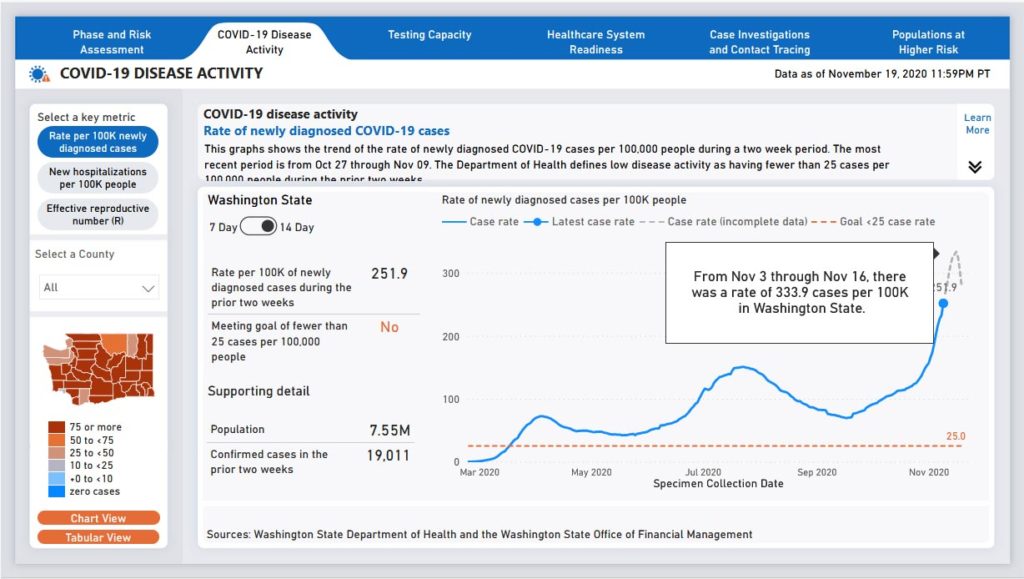 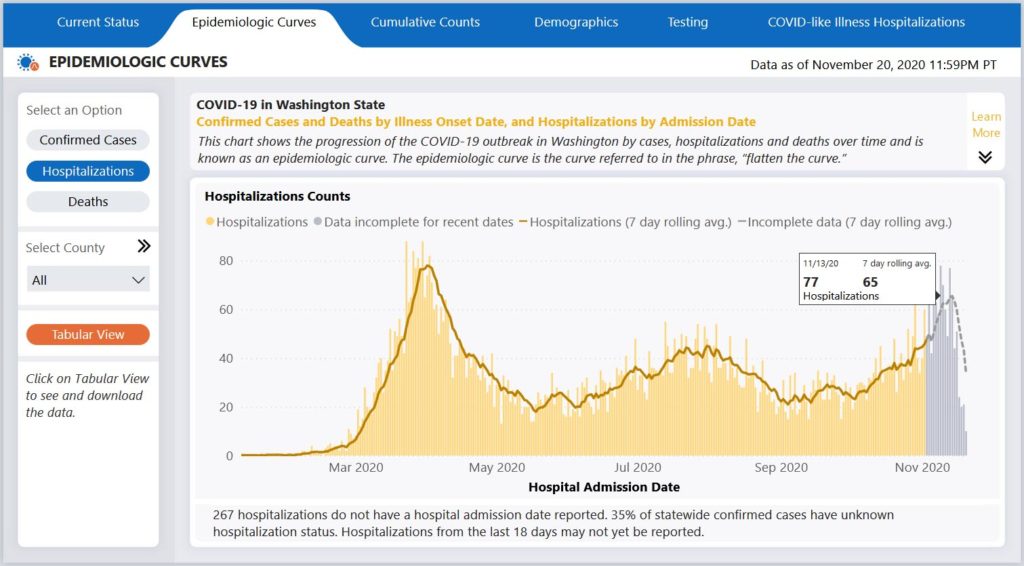 Due to the testing system being overwhelmed this week with unprecedented numbers of Washingtonians seeking tests, the numbers below are preliminary and are based on partial data (see the statement from the DOH here). The DOH is working on increasing test data reporting capacity, and will update numbers once this is accomplished. 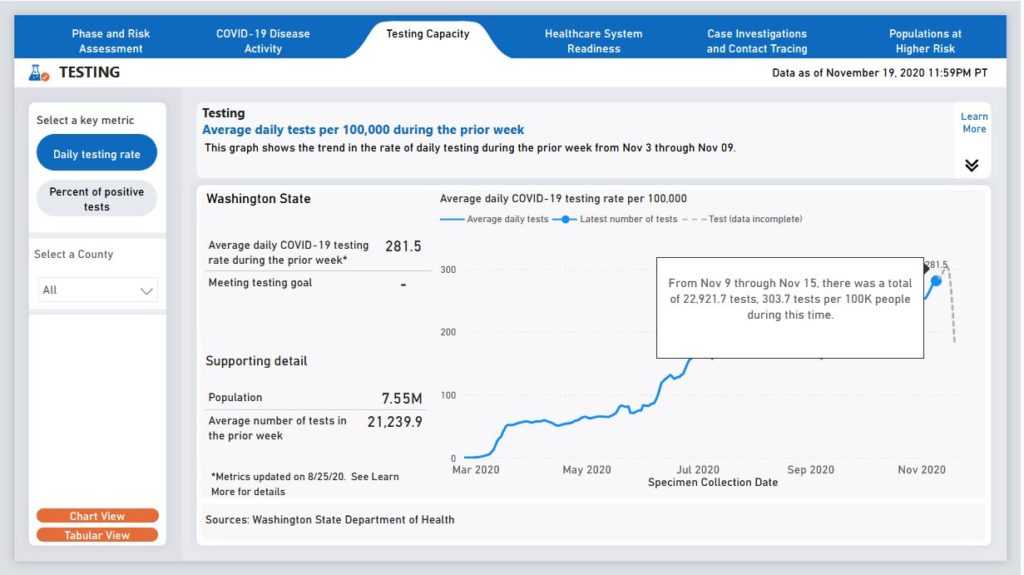 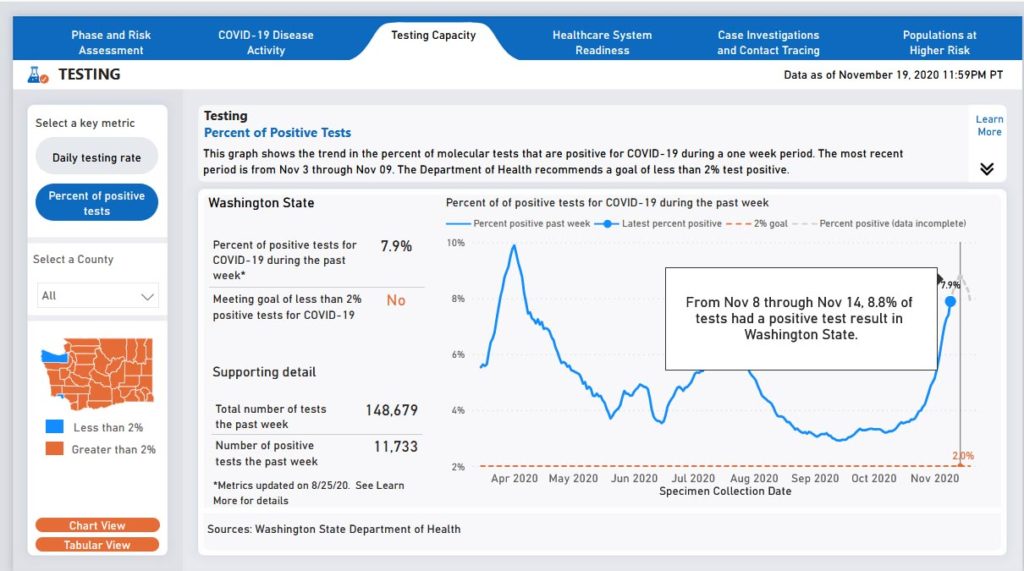 Despite the rising numbers, as of last week no Washington counties have reverted to an earlier phase of reopening despite new restrictions. Note that the numbers to the left of the map summarize the latest numbers of critical metrics, some of which are reported in more detail above. 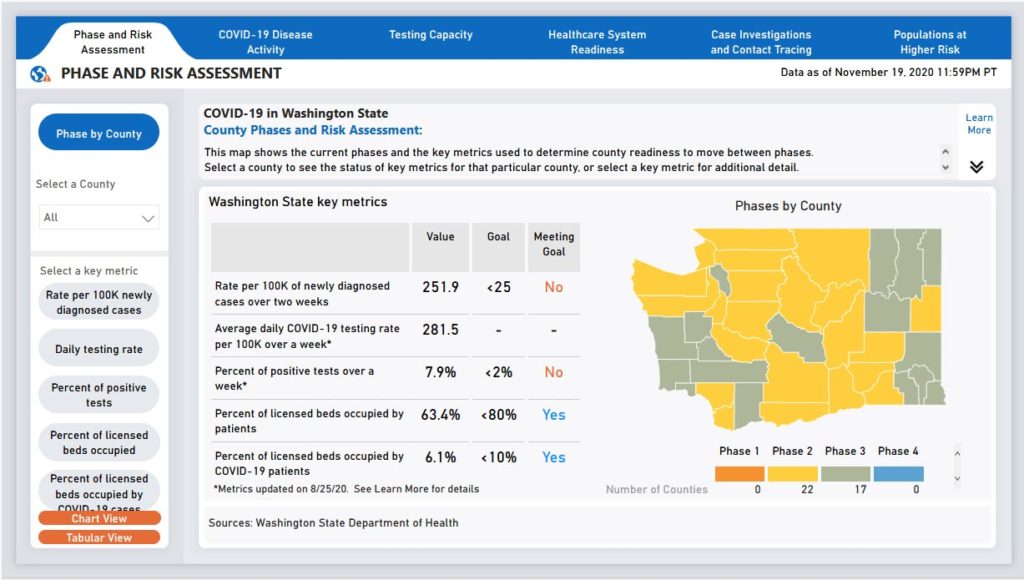 State demographic patterns continue unchanged, with the Nov. 20 report following the familiar report of most infections among younger people, and most hospitalizations and deaths in older populations, with those age 80 and older comprising a mere 4% of cases, but more than half the COVID-related deaths. 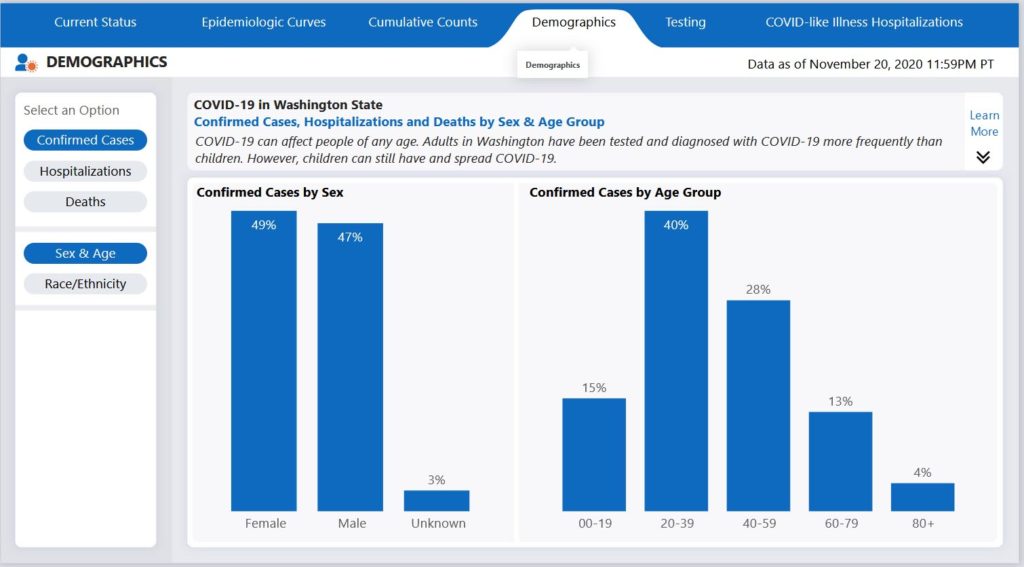 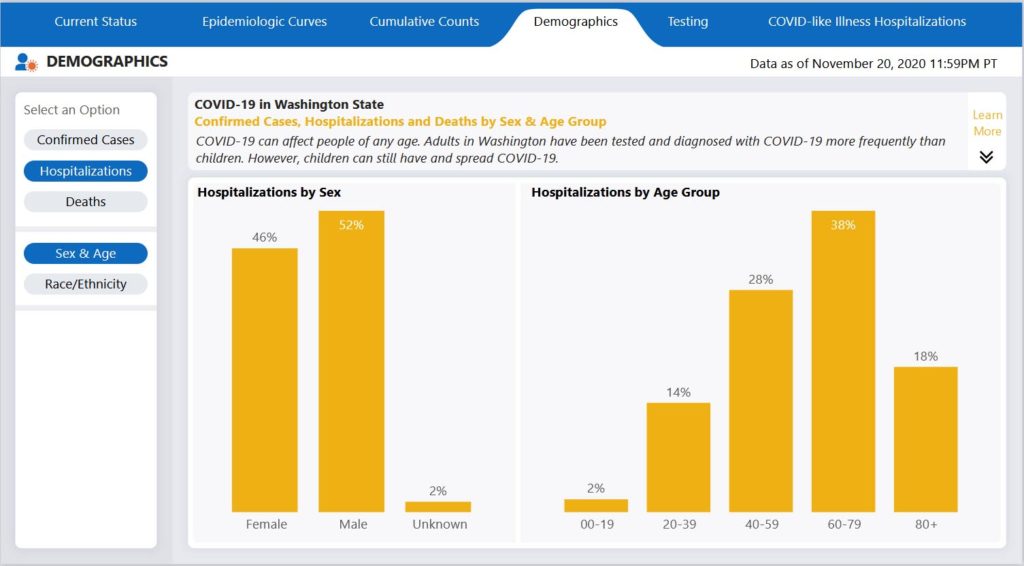 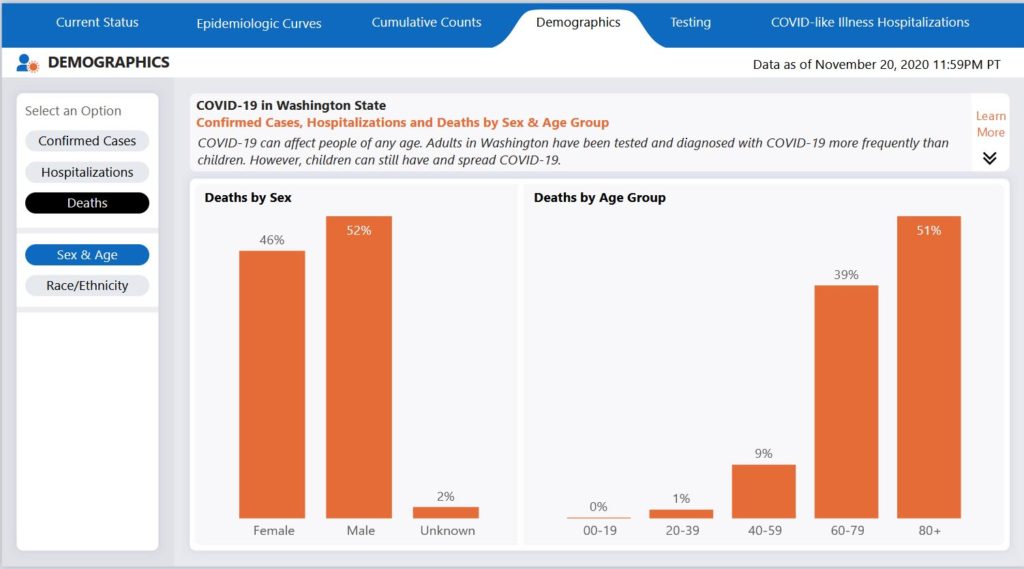 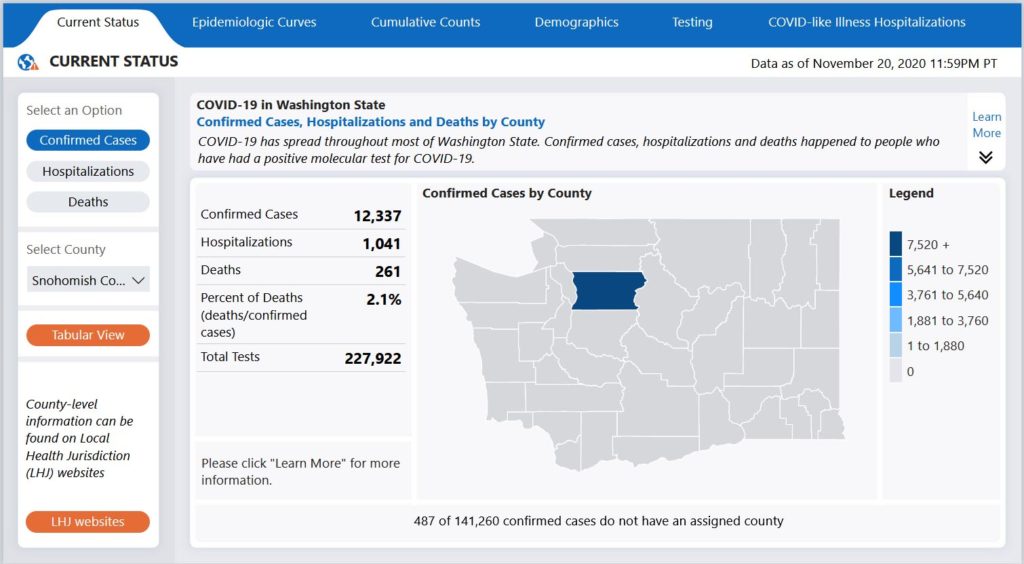 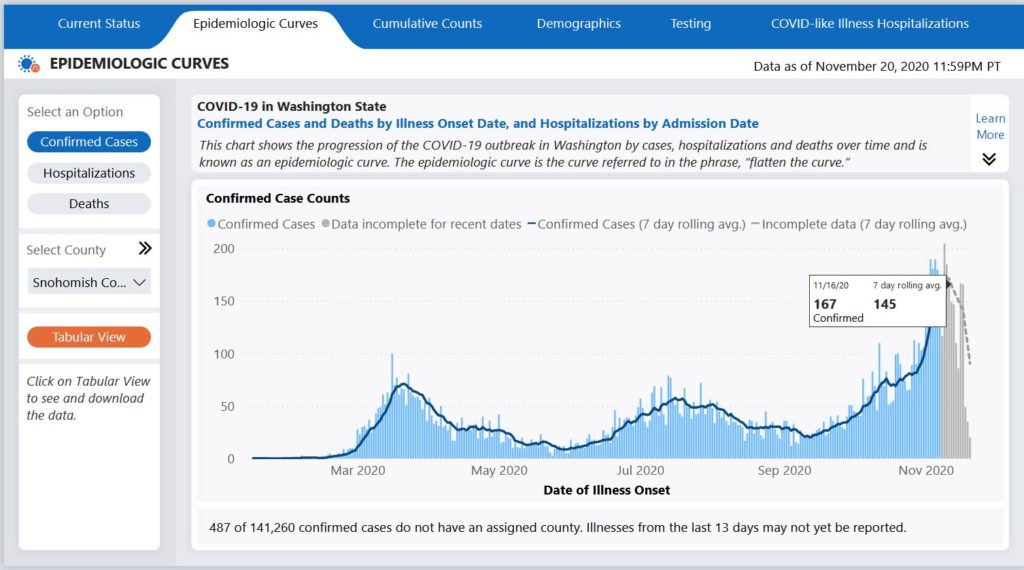 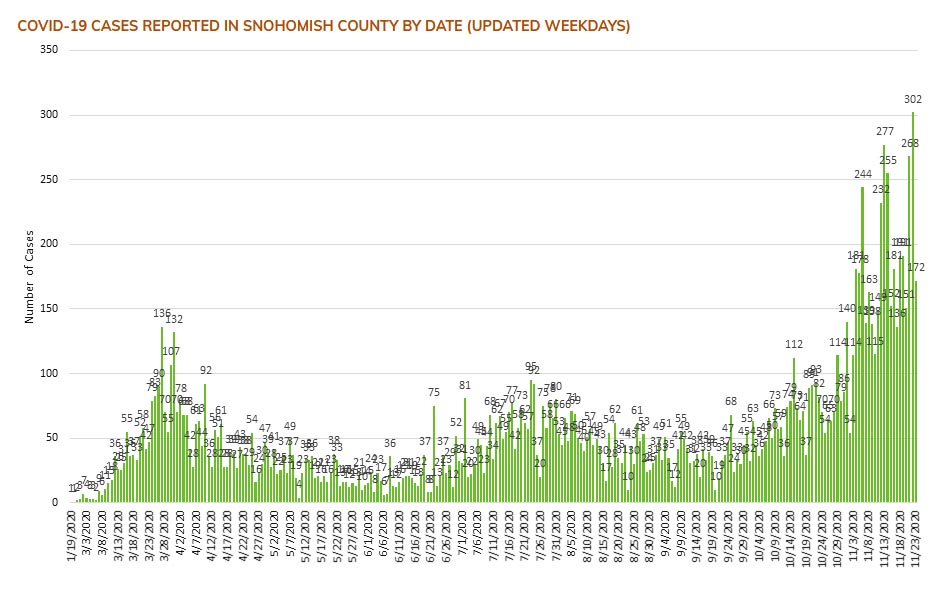 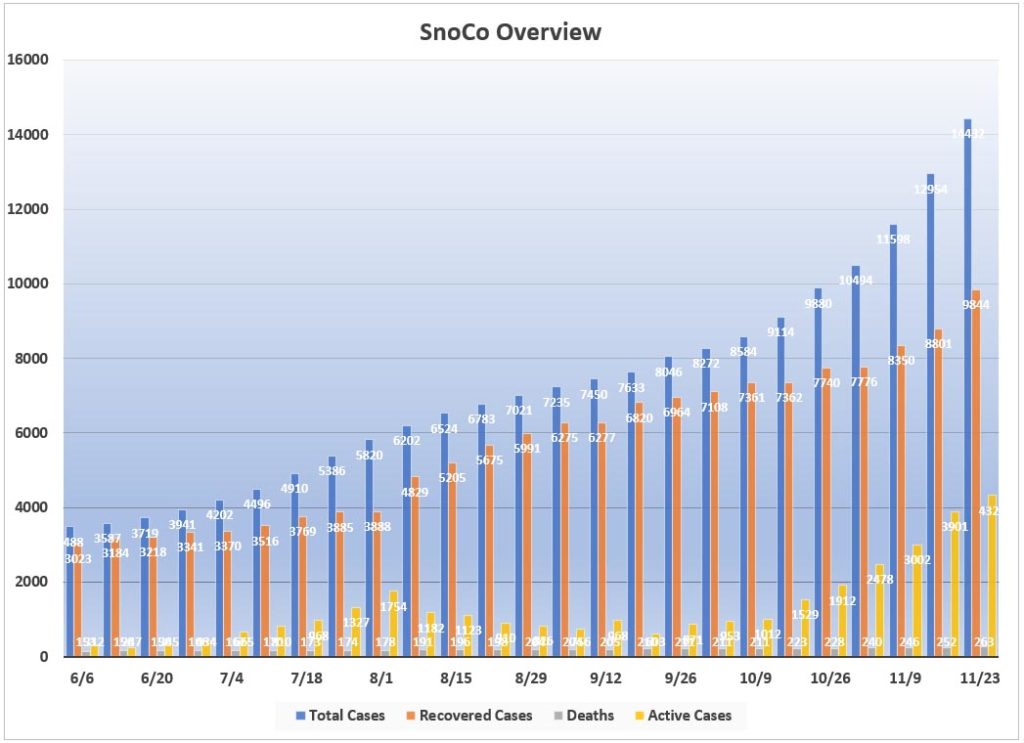 The two-week rolling average case rate chart from the Snohomish Health District shows a slight tapering off this week, standing at 303.6 — a gain of 25.2 percentage points from last week compared to a 94 percentage point gain the previous week. 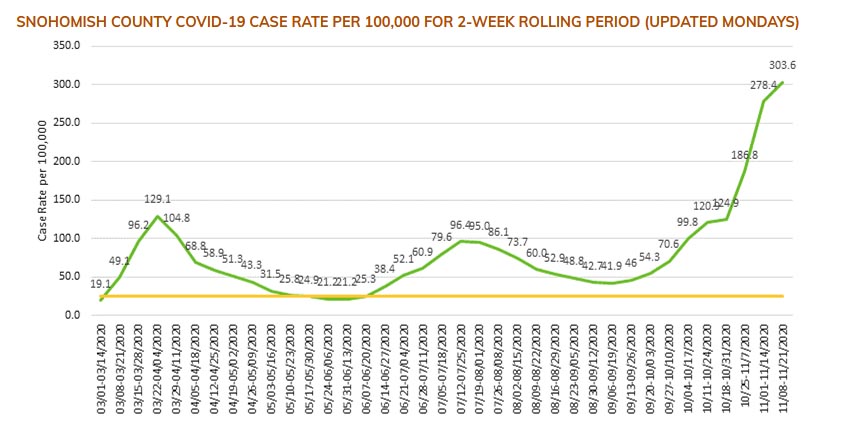 The latest numbers on deaths at the county level are reported in the charts and tables below (compare these with the information posted above). 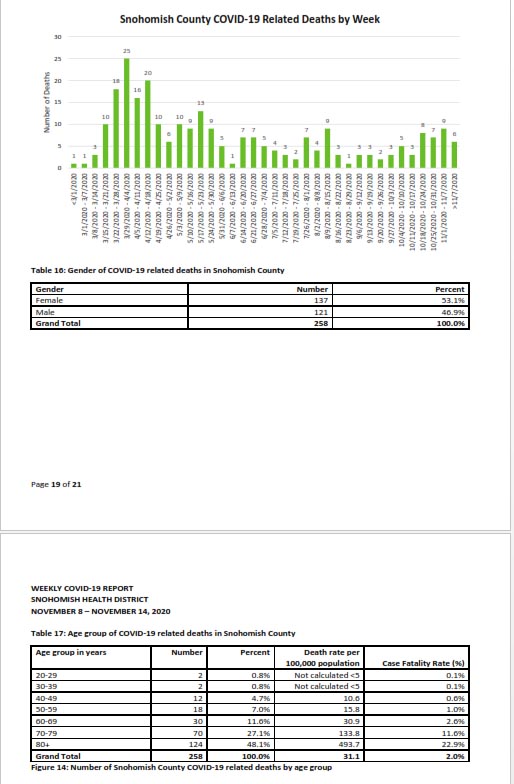 The testing activity table (weekly numbers) and chart (rolling average) from the Snohomish Health District below reflect and compare overall counts with numbers of positive results through Nov. 14.  Note that the overall percent of positive test results increased this week from 9.6% to 10.2% as indicated in the rolling average line chart. 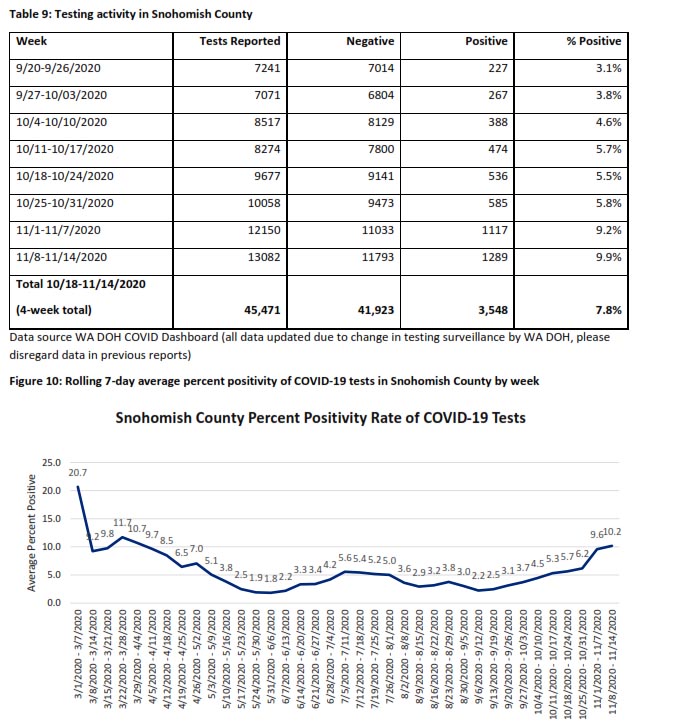 Note: With the exception of death numbers, these data are taken from the most recent updates from the Snohomish Health District Snapshots and Reports web page.  As data are verified, occasional true-ups are made in the interest of accuracy and these may result in changes to previously posted numbers.  Verified death numbers lag by a week, and are taken from the Nov. 23  COVID-19 Weekly Update report from the Snohomish Health District. Because these are coming from two different sources, where necessary figures have been interpolated for clarity.

Critical metrics (total cases, recovered cases, deaths, and active cases) for our home cities are shown in the charts below.  Note particularly the worrying upward trends in total cases and active cases continues this week, accompanied by a much slower increase in recoveries – all indicate that in our local area we are getting sicker at an ever-increasing rate. 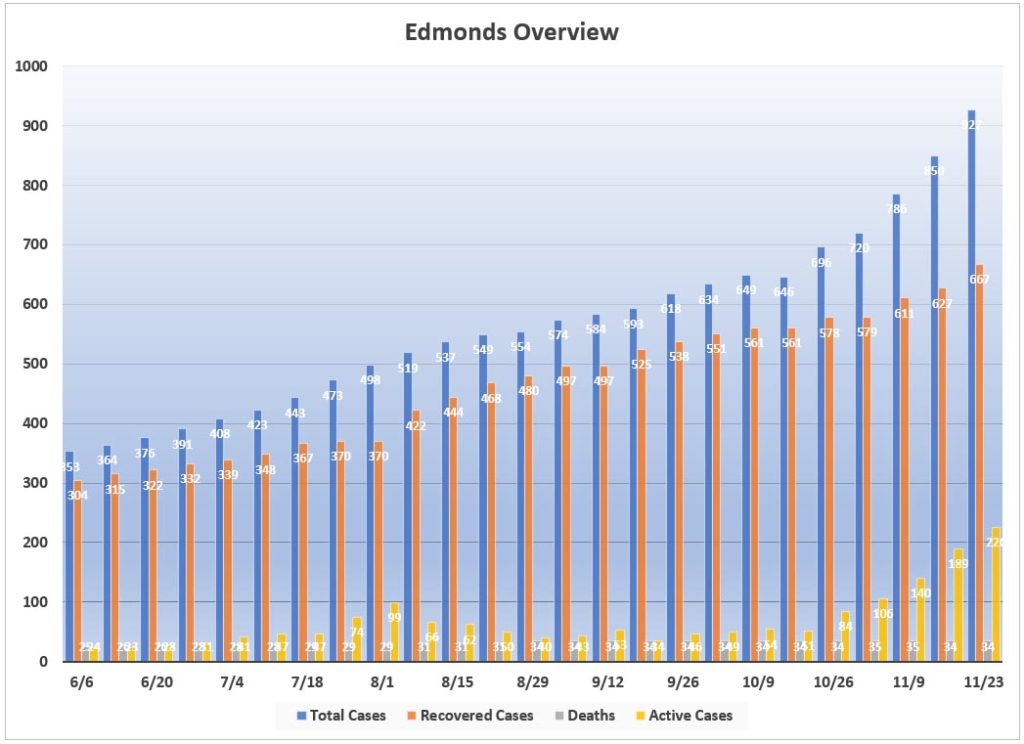 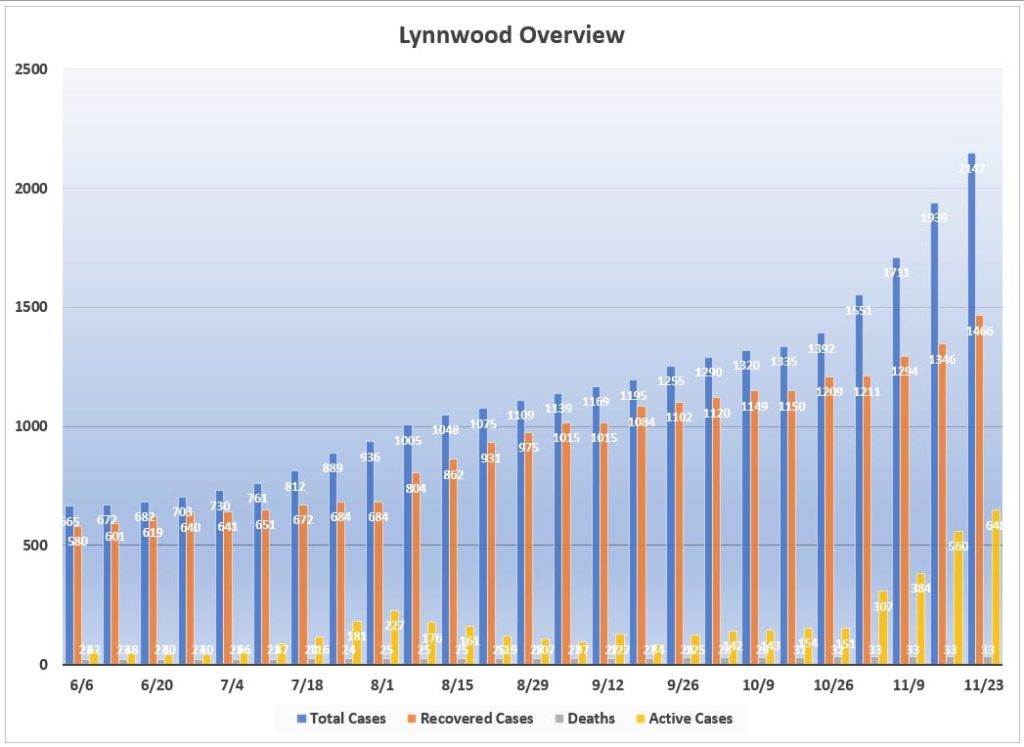 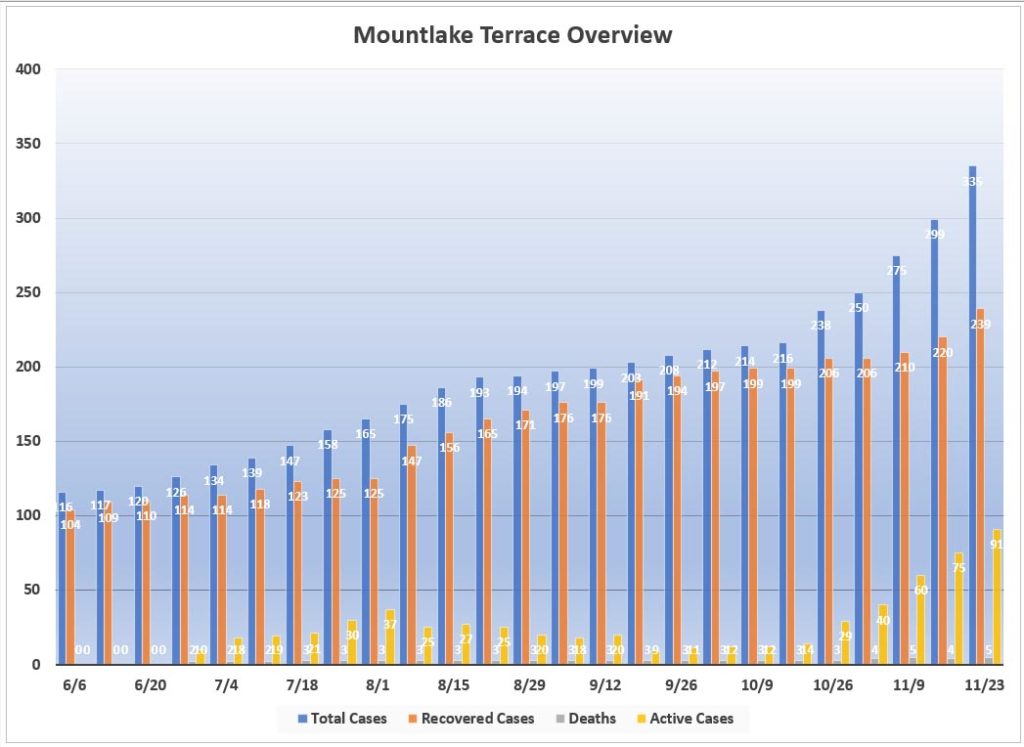