A new comic book all about the history of Lynnwood has recently hit the shelves. Following the journey of Luzy, her twin brother Jake and their pet chickens, Crossing the Road: A Chicken-Themed Journey Through Lynnwood History takes readers on a journey from the city’s earliest days — including its poultry– to the present.

This comic was a collaboration between the Lynnwood History & Heritage Board and the Lynnwood-Alderwood Manor Heritage Association and Museum (LAMHA), and was written and illustrated by Natalie Leif.

A resident of Shoreline, Leif, who prefers they/them pronouns, did not grow up in the Lynnwood area – or Washington, for that matter. A military brat, Leif has resided in places as far away as Texas and Wisconsin, but wanted to live somewhere with an artsy appeal.

“I always wanted to meet other artists and writers,” Leif said. “So I was drawn [no pun intended] to the Seattle art scene.”

Leif said they’ve always liked history, and when they saw the History & Heritage Board was looking for someone to write and illustrate a comic on Lynnwood history, they figured why not give it a shot? Leif works in the Lynnwood Public Library so they were surrounded by endless resources for the project anyway.

This would be a piece of cake, right? As it turned out, finding resources that were reliable was a bit harder than Leif had initially anticipated.

“So much of it is speculation or propaganda,” Leif said. “More than once, I had to scrap an entire source that turned out to be fictional, exaggerated or outright racist.”

Leif credits a lot of the comic’s success to the History & Heritage Board and LAMHA, who helped a lot with finding credible resources. 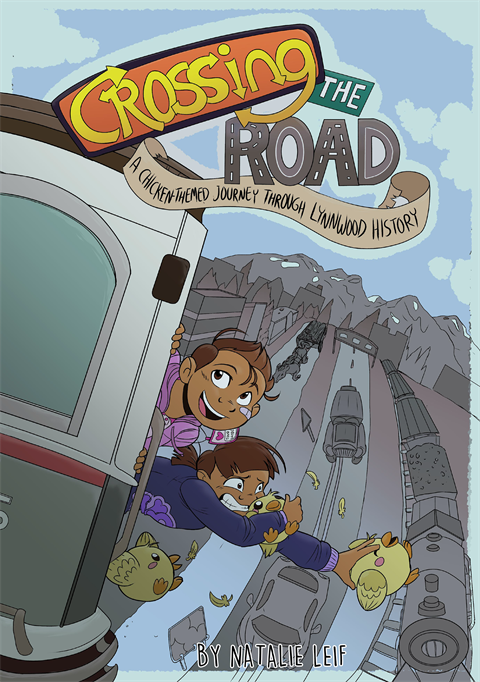 “They not only gave me several names and emails to reach out to for real, in-person recollections,” Leif said, “but they looked over my first drafts and called out any errors I made on the way. As such, if anything in the book reads well, it’s because of those two. If anything reads terribly, it’s because of me.”

Leif said the project wouldn’t have been possible without the support of family.

“I want to say thank you to my grandma for the main characters,” Leif said. “As a Filipino-American immigrant, she inspired a lot of their personalities, and I stalked her Facebook obsessively to try and do them justice. I’d also like to thank my partner, who added vital details and feedback from a Native point of view – as well as just an outsider’s point of view.”

In 2019, Leif won the Seattle EPIC Writer’s Award for the short story Flawed Gods, which gave them the confidence to seek out the Lynnwood history project.

Writing and drawing have always been favorite activities, to the point Leif is convinced their mom swallowed a crayon while she was pregnant. Leif would love to become a full-time writer eventually, but right now, is content working at the library and writing for contracts and commissions.

The digital copy of Crossing the Road can be found here, and hard copies will be available soon at the Lynnwood library, local schools and LAMHA.