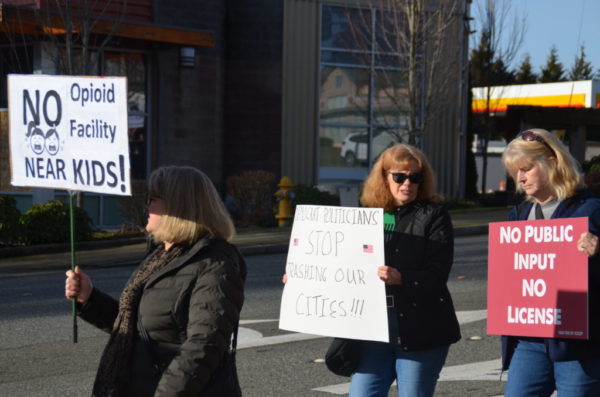 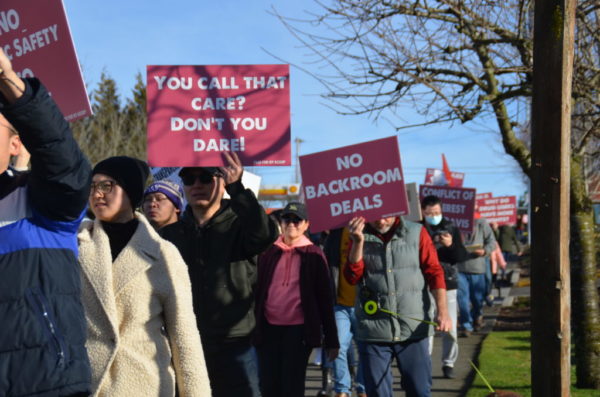 Shouting “kids before profit” and “we demand transparency,” about 100 people came together Saturday afternoon to protest a proposed methadone clinic adjacent to the Lynnwood Alderwood Boys and Girls Club.

The protest included speeches from Lynnwood City Councilmembers Shirley Sutton, Jim Smith, Julieta Altamirano-Crosby and Patrick Decker. Councilmember George Hurst was unable to attend but provided Decker with a statement to read on his behalf.

The center, operated by Acadia Healthcare, has been the topic of two Lynnwood City Council meetings and related protests since the community learned in late December about Acadia’s proposal to relocate it to 2322 196th St. S.W. Acadia has already acquired a 10-year lease for the building, and the center is scheduled to open at the end of January.

Protesters sounded off against the Washington Department of Health – which is responsible for licensing the facility — and Acadia Healthcare, shouting cries of “No public input, no license,” “Kids before profit” and “We demand transparency.” Leading them was parent Vivian Dong, organizer of Safe Lynnwood, a group formed to oppose the treatment center.

The group marched from the facility to the Boys and Girls Club and then to the Whole Foods Market street corner to protest, receiving a number of honks from passing drivers.

The issue is on the Lynnwood City Council meeting agenda again Tuesday, Jan. 17, when councilmembers are set to discuss a letter they will send to the state Department of Health.

— Story and photos by Jasmine Contreras-Lewis