The Edmonds School Board will first search for an interim superintendent to allow for more time when selecting a permanent replacement for Superintendent Dr. Gustavo Balderas.

“This is difficult,” President Nancy Katims said during the board’s March 22 business meeting, “but I think we’re doing this in a logical, analytical and reasonable way.” The goal, Katims added is “to still completely protect our district to make sure we continue to have strong leadership who will continue the work that we have started and will respect what we as a district care about in terms of making sure every student feels included, every student feels like they belong and that we will continue on a movement of continuous improvement across our schools and the district.”

Balderas recently announced that he will soon be leaving the district to head the Beaverton, Oregon School District. Balderas, who has been with the Edmonds School District since July 2020, said his last day will be June 30.

It was also noted that permanent superintendent positions typically start getting posted in December and January, near the end or beginning of the calendar year.

“That has already happened this year and so most people that have applied or wanted to change positions, at least the highest-quality ones, have already applied for jobs and been recruited and have a position for next fall,” Director Gary Noble said. “And so even if we were to do a full search right now and do it in a really compressed way, the pool of available superintendents this year has already been depleted.”

Katims said that when hiring an interim superintendent, the board would work to ensure that “they are continuing the kind of work that’s going on in the district in terms of equity and inclusion, our strategic plan, (and) momentum on the number of initiatives that we have going on. I want to make sure that people understand that when we get an experienced interim superintendent, that’s a person that can keep the momentum on the strategic plan, keeping focus on what matters to us, and I want to remind people that it’s the board that gives the superintendent direction.”

“Because the board has these as our high priorities and we’ve worked closely with Dr. Balderas and the other staff in terms of creating a strategic plan that we all buy into and agree to, that’s what we would give as a charge to whoever might be the interim superintendent as well as at the time that we would hire a permanent superintendent,” she added.

The school board reached a consensus that it will look to hire an experienced interim superintendent for the short term in advance of the 2022-23 school year. It plans to then have a permanent superintendent hired and in place before the following fall. Those searches will include both internal and external candidates for the positions, and the board will seek the services of a professional search firm to help with the interim search.

“Hiring an interim superintendent allows us to do the full thorough search that the community has been sharing that they want us to do,” Director Carin Chase said. She noted that she is looking forward to the search “because it’s an excellent way for us to do a touchpoint and engagement with the community and the feedback we get on what folks are looking for in a superintendent kind of allows us to see how we as a district are doing from a variety of stakeholders that we may not often hear from.”

During his Superintendent’s report, Balderas said he appreciated the comments received from staff at the last board meeting expressing concern regarding the district’s special education programs, and noted that the district held five “listening sessions” with staff last week. Based on the feedback gathered during those sessions, the district working on a timeline and action steps that it will then present to the school board at a later date.

At the board’s March 8 regular business meeting, school district educators working in the special education program and their supporters pointed to numerous issues about the program, stating in a letter that they “are feeling completely abandoned” by district administrators. The letter was signed by more than 350 special educators and supporters, but the names of those signing were omitted because staff say they fear they will lose their jobs for speaking out against the administration.

The letter states that drastic decisions are being made in the program without any input from teachers or staff. Furthermore, staff said they have been reprimanded or ignored when attempting to voice their concerns.

During public comments on March 22, several more speakers and written comments submitted continued to express frustrations with — and lack of confidence in — the special education program and student service department. They also voiced support for the open letter sent by former and current staff to the district.

Carla Dorsey, a special education teacher at Cedar Way Elementary School, noted that the concerns are not related to COVID-19 and she read from some of the more than 130 comments that were also submitted with the letter.

Those included that a toxic work environment created by student service leadership has recently led to more than nine resignations, five of which were administrators, and some educators said they “don’t plan on staying in special education next year mostly due to concerns listed in this letter.” One comment said called the rate of turnover “within our district and specific department feels significant and alarming…this directly impacts our ability to serve students and families in an equitable way. We need stability, transparency, trust, inclusion, communication and integrity at a minimum within our district positions of leadership.” In addition, commenters said that school buildings are not receiving adequate assistance from the district’s student service department needed to support students, families and staff.

“While we appreciate the listening sessions,” Dorsey said, “we have a lot of great concerns. Moving forward we are continuing and going to continue to advocate for the best of our students because those are who we are here for and we love them and we are concerned.”

Assistant Superintendent Dana Geaslen presented a COVID-19 update to the board. She noted that case counts and positivity rates in Snohomish County have continued to decrease. The omicron variant still makes up more than 90% of all cases reported, while its BA.2 subvariant has seen a slight increase over the last two weeks.

The Edmonds School District reported that its case and positivity rates have also decreased. It is continuing to offer COVID-19 testing for students, families and staff who are symptomatic or request testing. The district is also accepting self-testing results with confirmation from a parent or guardian.

Under recently updated Washington State Department of Health guidelines, school districts must maintain district employee vaccination requirements, exclude from school those that are symptomatic, isolate students and staff who are diagnosed with COVID-19, provide access to masks and testing, report positive cases and outbreaks, and respond to outbreak criteria identified by local health departments. In addition, families and staff must notify the district of potential exposure to a positive case of COVID-19.

In other business, Director of Assessment, Research and Evaluation Austin Mueller presented the board with results from the fall 2021 Smarter Balanced Assessment (SBA) data report. The standardized tests are used for assessing student growth. Typically they are administered in March; however, the state testing window was pushed back to the fall last year due to the pandemic.

When compared to Washington state as a whole, the percentage of students meeting the testing standards in all of the Edmonds School District was lower across several grade levels among the core subjects of English language arts, math and science.

Mueller noted there were several confounding factors besides the rescheduling, including abbreviated testing versions and lengths, and lower student participation rates in the district — particularly at the high school level. He explained there are many factors that contribute to testing outcomes in any school year, and therefore attributing the lower scores to any one factor is difficult.

However, he said that lower participation rates have a particular impact on the district’s overall scores. That’s because those students who are supposed to have tested, but didn’t, are treated as having not met the test’s standards. Mueller added that while the “decrease in performance is at least somewhat attributable to the pandemic, we’re uncertain due to the amount of nonparticipation.”

The board of directors plans to conduct a deeper dive into the SBA data report at a future board study session. In addition, the directors and Mueller all said they will be closely monitoring the upcoming results from testing this spring.

“It will be very interesting to see when we get spring results, even though I know there are going to be limitations to those data too, but it’s very helpful,” Katims said.

In other business, the board approved authorizing a services agreement with Integrus Architecture to replace Oak Heights Elementary School. The nearly $5.2 million contract covers the complete range of services that Integrus Architecture and their sub-consultants will provide for the replacement project, including design, bidding, construction and close-out.

In January 2020, the school board approved the selection of Integrus Architecture along with the architect pre-design agreement for the replacement of Oak Heights. That interim agreement permitted the school district and the architecture firm to proceed with planning the project while negotiating the complete agreement and developing funding and scheduling. The school replacement project is funded with proceeds from the 2021 school levy and a Washington state school construction assistance program.

Directors also approved a resolution and final map for redistricting of school board director district boundaries. Every 10 years, following the U.S. Census, the school district is required to redraw the boundaries of its board of directors’ districts. The process changes the geographic boundaries of voting districts so that all districts have an equal number of people in order to ensure there is an equal representation in government. The school board previously reviewed prospective redistricting maps at two study sessions and a public hearing regarding the matter was also held at the March 8 board meeting. 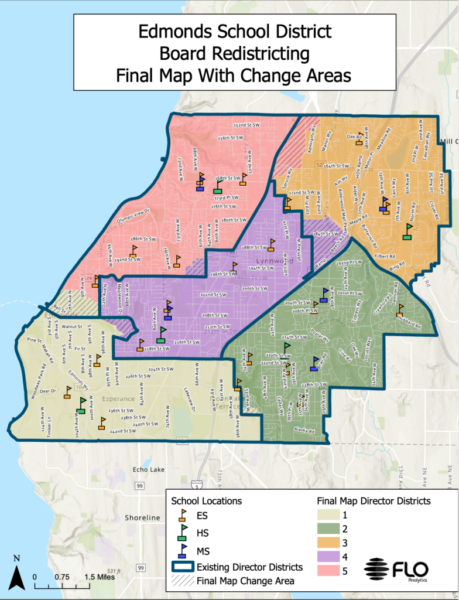