When I walked into my grandparents’ home as a little girl, and later, in November visits to my mother’s kitchen… I’d draw a deep breath. The best part of Thanksgiving was the aroma of the food —  roast turkey, fresh baked bread and pies — our traditional family fare filled my nose.

I’d bet that for all of us, our sense of smell kicks off synapses. Scents and aromas trigger memories tucked away in the olfactory section of the brain, so strong, one can time travel upon inhalation.

Out on the farm our industrious grandmother made everything from scratch. Crusty loaves of wheat germ herb bread, pumpkin pies –(yes, she grew the pumpkins),  every edible bite baked in her kitchen… right down to the crescent roll dough of her popular pizza rolls.

Rich Yeast Bread – a faded title scrawled on the worn three-by-five card in her recipe box, yielded enough dough to roll out two 18-inch circles. These were cut in triangles and spread with good old Heinz ketchup. Sprinkles of Parmesan cheese, the kind from a green circular can, topped each section. Rolled up to seal in the saucy cheese mixture, and arranged with plenty of space between for expansion,  the yeasty spirals shrouded in linen towels were set in a warm corner to raise one more time.

When the turkey came out of the oven, trays of rolls took its place. Rolls were piping hot as we were called to fill our plates. I recall these tasty pastries were rationed. Kids and grownups alike were allocated one per person as we traversed the kitchen buffet line of pink and gray Formica countertops.

Adults seated, and blessings said, the grandkids dismissed to our “kid’s tables.”  We’d tiptoe back to the kitchen and grab seconds, and sometimes thirds, before the pile of pastries disappeared completely.

Years later in my own kitchen I upgraded the ingredients. Organic whole wheat pastry flour formed my circles of dough. I incorporated more traditional Italian ingredients. Tomato puree and fresh grated Parmesan were spread atop my wholesome version. But you know, they never did quite taste the same. My taste buds have long memories, I guess.

Thanksgiving ushered in the holidays, childhood memories of mine, beyond the traditional turkey dinner, include the making of “French Chew,” my favorite holiday sweet treat. Pieces of the wrapped hand-pulled taffy kept for months. I always stashed a few in my sock drawer, useful to coax a loose tooth and ensure a visit from the tooth fairy.

The candy base was cooked up in the kitchen by the ladies, and the bubbling mass then poured into butter-lined Pyrex dishes. When cooled enough to handle without burning one’s fingers, the men took over. Golden plates of molasses-colored candy were transferred outside. The cool autumn temperatures aided the process as pairs of men proceeded to pull and stretch back and forth in pairs. As the men wrestled the sticky unwieldy mass its color changed from tawny brown to a creamy white color.

When the muscled arms of dads, uncles and granddads reached exhaustion, they’d coil long slender ropes of the pale substance, only a few inches in diameter, onto trays and head back to the warm house.

While men pulled the taffy, women busied themselves with clean-up and prepared for production; the final step — cutting and wrapping individual bites of the French chew.

Little kids skillful enough to wield blunt scissors, cut squares of wax paper, Grandchildren old enough to be trusted to not eat every other piece, sat at a long table and carefully wrapped each piece in a small square of waxed paper.

Moms and Aunties scooped the wrapped bites into bags and tied shut with ribbon.  Doled out to each family at the end of the evening, they were closely guarded to ensure there’d be enough to last until stockings were filled on Christmas Eve.

Anxious to re-create this magical event and start my own traditional grown-up holiday season, I perused the list of ingredients on the card procured the recipe from grandma’s tin box.  Horrified, I read the actual recipe. I expected only tons of sugar, butter and cream, but cups of corn syrup, and an entire stick of paraffin wax shocked my sensibilities.

Wow! That explained the raging headaches I experienced. Though closely supervised, I surreptitiously slid hunks of taffy intended to be wrapped into my mouth as I worked side-by-side with my cousins. Confectionary over consumption certainly troubled my sleep, and subsequently that of my parents, following the evening’s candy production.

Thanksgiving holidays kicked off our holiday baking season the way the turkey-bowl college football games guarantee the men will be huddled in front of TV sets clear through the bowl games of New Years and beyond.

Long metal tins extruded sugary dough onto metal sheets, filled racks of hot ovens to capacity. Decorated with a variety of sprinkles, applied by teaspoons atop piping hot shapes as they cooled, sampled batch by batch to ensure quality standards were met.

In her later years, our mom decided efficiency trumped tradition. She took to roasting a stuffed and trussed bird the day before the meal. Ditto the pies. Rolls came from the store in plastic bags.

Pies were served at room temperature and squirted with crème from an aerosol can.  Sliced and ready to serve, the turkey was reheated in foil packets along with the dressing. Only items like mashed potatoes and the classic casserole of green beans, mushroom soup and onion rings were prepared on the actual day of our family feast.

Christmas cookie baking with grandma lost its homemade touch.  No sweet smells greeted the noses of the newest generation of little bakers. Memories of holiday goodies would be short on aroma in their collections of cookie memories.

Blank sugar cookies cut with precision, baked days ahead and laid out on parchment paper, awaited the arrival of grandkids. Ushered in to the kitchen, they’d assemble around her large oval table. My kids, along with nieces and nephews, commenced to make edible art from colored frosting and sprinkles applied to the surfaces of flat sugar cookies assembled by their grandmother.

Well, yours truly is determined to honor traditions of my grandmother. I won’t deprive our grandkids of the opportunity to stash some sweet smells into their own brain cells.

I hope they will remember what Turkey Day smells like too. 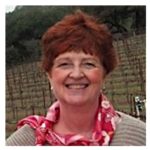