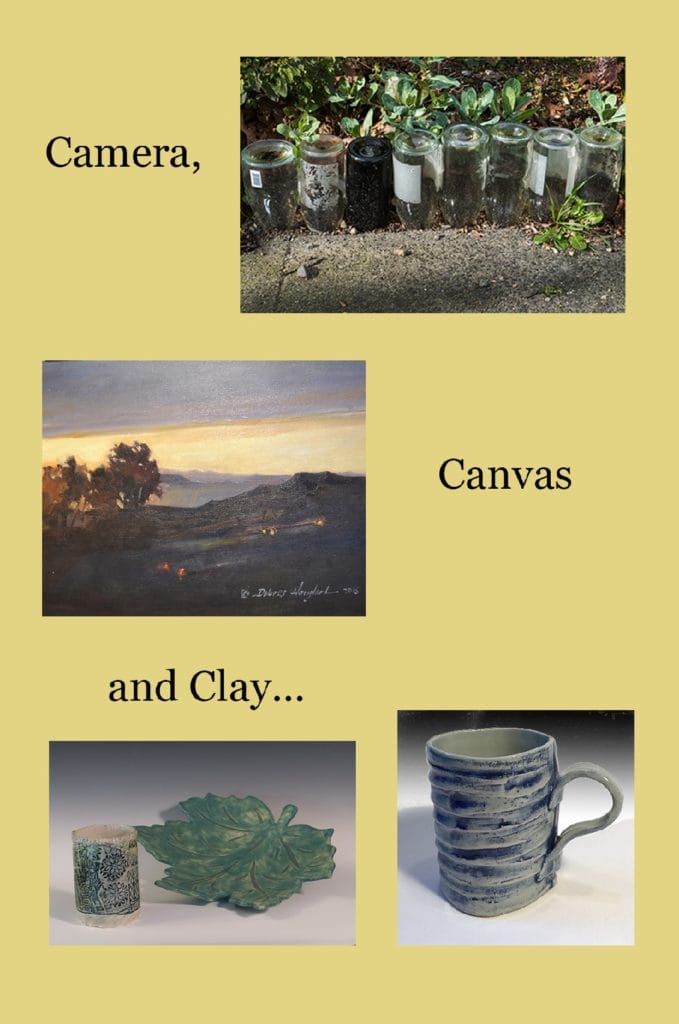 Gallery North is pleased to announce its Featured Artist Show for the month of April, 2021. Titled “Camera, Canvas and Clay,” this show will feature work by Delores Haugland (painter), Sam Spencer (photographer), as well as ceramics made by two different artists, Dan Neish and Diana Sheiness.

Delores Pierce-Haugland, a current member of the Gallery North, first studied commercial art at the Burnley School for Art (later called the “Art Institute of Seattle”). Rather than joining the commercial art world, she decided to pursue fine art instead. Over the years, she has explored a variety of mediums – watercolor, acrylic, pastels, oils, sumi-e and mixed media collage. Ms. Haugland’s paintings have won several awards, and her work has been shown in numerous juried shows around the Seattle area. For the upcoming show, she will display a mixture of recent and older works.

Sam Spencer has had an avid interest in photography since his teenage years. About fifteen years ago, while taking photography classes at Everett Community College, Mr. Spencer became inspired to seriously expand his skills in digital photography. After completing the program at the Everett Community College, he initially focused on travel photography, then his interests turned to allegorical composite work, and more recently to the creation of mood-infused works. A member of Gallery North since 2008, Mr. Spencer has had a longer tenure at the gallery than any of the other current members.

Dan Neish, until his recent retirement, taught art for many years at the Edmonds Community College. This included teaching classes in drawing, painting and ceramics. Around five years ago, he was chosen as the Featured Artist at a Gallery North show at which he exhibited his paintings. In the current exhibit, Mr. Neish will offer a number of ceramic pieces that reflect his considerable skills as a potter. Diana Sheiness, the second potter participating in this show, was one of Mr. Neish’s many ceramics students. She enjoys crafting a wide variety of ceramic items, including sculpture, jewelry and functional pottery as well. Selections of her jewelry and tableware will be included in the April show.

“Camera, Canvas and Clay” will be on display at Gallery North from April 1 till April 30. However, because of the pandemic, there will be no reception held for this show. The gallery is located on Main Street in Edmonds, and is open Tuesday through Sunday from 11 A.M. to 5 P.M, closed on Mondays.

We are proud to report that 2021 marks the Gallery North’s 60th year as a continuously operating artists’ cooperative that provides local artists with a venue to display their work.