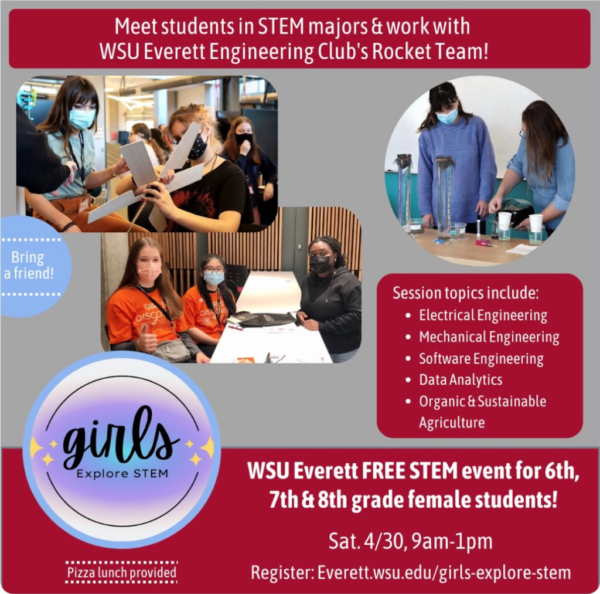 Washington State University Everett campus is hosting a free “Girls Explore STEM” event for 6th-8th grade girls Saturday, April 30 from 9 a.m. to 1 p.m. Participants will engage in a series of hands-on engineering and scientific activities that include specific challenges focused on those disciplines.

The upcoming workshop is designed to help increase the interest locally in engineering among female students. Session topics include data analytics, electrical engineering, mechanical engineering, software engineering, and organic and sustainable agriculture. WSU Everett student mentors, including members of the engineering club’s rocket team, and school faculty will be on hand to work with participants throughout each session.

Brandon Buckingham, program coordinator of student affairs at the campus, said, “Our goal is that the young women who attend ‘Girls Explore STEM’ will leave invigorated and excited with the opportunity and expansive potential a STEM degree and career can have for their lives.”

He noted the idea for holding such an event came about in the fall of 2020 after “WSU Everett had a total of four female students join its engineering programs as juniors which is the lowest enrollment for female students our campus has seen in years. Further digging discovered in 2015-2016 only 36% of bachelor’s degrees conferred in STEM fields were to women even though women received roughly 58% of all degrees conferred,” according to data from the National Center for Education Statistics.

The workshop is being held in coordination with Snohomish STEM Network, which partners with a variety of community stakeholders throughout the region and serves to increase the awareness, skills and access to STEM learning experiences for all students.

“This ‘Girls Explore STEM’ event could be the spark in someone’s life that ignites their interest in STEM education, and we are excited to be a part of it,” said Snohomish STEM Network Manager Alyssa Jackson.

She added that recent data highlights the continued disparity of females in STEM fields pointing to a U.S. Census Bureau article that notes despite some gains, over the past five decades, in 2019 women made up nearly half of the nation’s workforce but only accounted for 27% of its workers in STEM occupations.

Locally, the Snohomish County region’s available family-sustaining wage jobs that are in high-demand will increasingly require a postsecondary degree or credential and by 2030 half of those jobs are projected to be in STEM fields or occupations based on STEM literacy, which Jackson said shows the importance of such education.

The event’s organizers hope it helps participants to “understand the avenues of accessibility and that college can be affordable, and it is here for them,” Buckingham added. “Ultimately raising the number of women in the STEM fields.”

Registration is available here and required beforehand as space is limited to 50 participants. A pizza lunch will also be provided.

The WSU Everett campus is located at 915 N. Broadway in Everett at the intersection of Broadway and Tower Street.