Renovation projects on the tower began in 2000, and many of those attending the event said they’re thrilled to see it completed at last.

Originally built in 1917, the water tower used to stand on the opposite side of the road from the park, along with the rest of the Alderwood Manor Demonstration Farm. Families looking to escape city life in Seattle were encouraged to buy five- or 10-acre plots of land around the farm and learn to grow crops and raise chickens.

Now, the structure is mostly hollow, but still houses a small rain collection unit that will water blueberry plants around the building perimeter.

Cheri Ryan, a member of the Alderwood Manor Heritage Association, said she’s glad this piece of Alderwood – and now Lynnwood – history has been preserved. 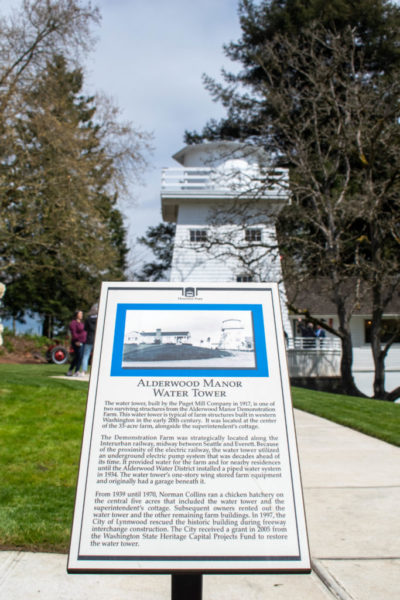 Lynnwood Parks, Recreation and Cultural Arts Director Lynn Sordel said this project would not have been possible without Ryan, a trustee for the Elizabeth Ruth Wallace Living Trust.

Born in Alderwood Manor in 1942, Elizabeth Ruth Wallace – better known as “Aunt Bette” – died in 2016. Before she passed, Aunt Bette established the trust in her name to give back to the community she loved and lived in. Through the trust, Ryan awarded Heritage Park with $500,000 to build a playground and finish restoring the water tower.

“That [donation] was the spark that made this project happen,” Sordel said. “And isn’t this one of the most beautiful places in the city now?”

The $453,000 project also received money from state and federal grants as well as city funding.

Lynnwood Mayor Christine Frizzell said the water tower symbolizes the resilience of the City of Lynnwood and stands as a visual representation of the wonderful people who live in it.

“This [tower] and this park continue to be an amazing historic and cultural resource in our community,” she said. “It’s so important that we celebrate our history.”

Lynnwood Parks Superintendent Eric Peterson thanked the many organizations that have spent years working together to complete the water tower restoration. The Lynnwood-Alderwood Manor Heritage Association and Lynnwood’s History and Heritage Board were vital during all the steps of the project, Peterson said, as well as the Lynnwood City Council.

He also took a moment to acknowledge the work of everyone who saw value in preserving Lynnwood’s history and who initially created Heritage Park.

“Before we move forward, we have to look back in the past at the people who made this park happen,” Peterson said.

Along with the new water tank, the restoration project includes a new ADA-compliant path to the water tower. The building has also been remodeled inside, and the heritage association intends to use the space for meetings and to rent out for small events, like weddings.