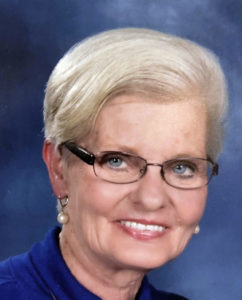 She was born on May 30, 1949, in Pocatello ID, the daughter of Joseph and Anna Schmidinger. She married Robert Petersen on December 26, 1970, in Pocatello.

JoAnn graduated from the University of Washington with a degree in nursing. She spent 26 years as a consulting nurse at Group Health, then 3 years at Seattle Children’s Hospital before retiring.

Over the years, JoAnn showed her adventurous spirit by windsurfing and backpacking in the Grand Tetons with her daughter, doing the Seattle-to-Portland ride in 2002 with her daughter and son-in-law, and going with her son to many concerts. She also went to Belgium with her son for a chocolatier course.

JoAnn got interested in quilting along with her daughter, and they traded helpful tips and pictures of their handiwork. She also enjoyed quilting with her local quilting group, including the occasional quilting retreat.

When blackberry season came around, she and Greg could be found picking berries and cooking many jars of jelly. JoAnn would be quick to point out there was never a seed in their jelly.

JoAnn was a great animal lover. In addition to her own dogs, she often dog sat for friends and neighbors, and brought the dogs gifts.

She found great camaraderie with her water aerobics group. She stepped up to become an instructor when needed.

She was active in St. Vincent de Paul Society. She enjoyed meeting neighbors on her many walks and was quick to lend a hand when needed.

Her son James preceded her in death. She is survived by her husband, son Gregory Petersen, and daughter Jennifer (Bradley) Will.

A Funeral Mass will be held at 11 a.m. on Friday, January 28, 2022, at St. Mark Catholic Church in Shoreline, with visitation one hour prior at 10 a.m. and Rosary at 10:30 a.m. Burial will follow at Holyrood Cemetery in Shoreline.