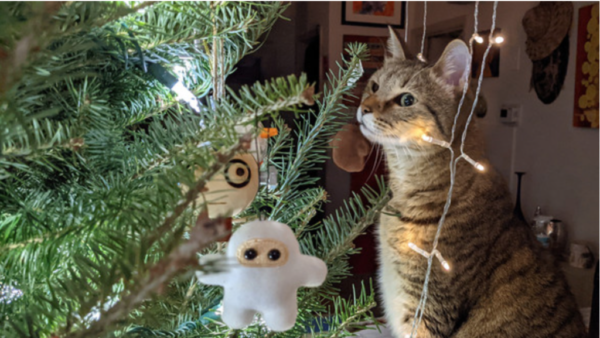 The hoidays can pose particular risks for your pets. Keep them safe with these tips from the U.S. Food and Drug Administration’s Center for Veterinary Medicine:

If your dog received a stocking full of pet treats, make sure he doesn’t gobble them all up at once, making them hard to digest. Unchewed pet treats can get stuck in the trachea (windpipe) or gastrointestinal tract (esophagus, stomach and intestines).

If your dog is in obvious distress from eating too much too fast, contact your vet immediately. Some telltale signs are drooling, choking or vomiting.

Take note of timing. If a bone or chew toy lodges in your dog’s stomach or intestines, the symptoms might not be immediate. Hours to days later, he may vomit and have diarrhea, be less active, not want to eat, and have stomach pain. If the blockage stays there too long, your dog may become very ill. When in doubt, contact your veterinarian, who may need to take x-rays or use an endoscope to see what and where the problem is.

Decorating your tree? Wrapping or unwrapping gifts? Keep a close eye on where you leave leftover tinsel, string and ribbons.

Your cat may find these decorations irresistible because they look like easy-to-catch, sparkly and wiggly prey. In fact, they can cause serious stomach and intestinal damage.

Play it safe by keeping tinsel off the tree and collecting all ribbons and strings after gifts are opened.

If you have holiday plants such as poinsettias, holly or mistletoe around, take care. When you display (or dispose of) these plants, your cat may decide they’re good to eat.

Take poinsettias, which can irritate your animal’s mouth and stomach and may cause vomiting and diarrhea. If your cat has snacked on poinsettia leaves, contact your veterinarian’s office.

Also discourage your pets from eating holly berries and leaves. In both dogs and cats, the plant’s toxins can cause drooling, vomiting, diarrhea, loss of appetite, and decreased activity.

Don’t give your pet table scraps that are high in fat, such as fat trimmed from meat or skin from your roasted turkey or chicken. Not only can rich foods cause an upset stomach, they can also cause a potentially life-threatening and painful disease called pancreatitis. The most common symptoms of pancreatitis in dogs include vomiting, stomach pain, restlessness, shaking, diarrhea, fever, and weakness.

In cats, the symptoms are less clear and harder to notice, such as decreased appetite and weight loss.

And be careful what you put in the trash can. Dogs, especially, are notorious for helping themselves to the turkey carcass or steak bones, which can get stuck in your dog’s esophagus, or trachea. Sharp pieces of bones can also injure your dog’s mouth, esophagus, and stomach, and can cause severe internal injuries.

Other human treats, including alcohol

You may know that eating chocolate can be dangerous to your dog or cat. But that’s not the only thing.

For instance, the seemingly harmless mints common in the holiday season can cause life-threatening problems for your dog if they contain xylitol, also found in food items such as candy, chewing gum, some peanut butters and baked goods, and personal hygiene products, such as toothpaste and mouthwash.

Symptoms occur quickly after dogs eat items containing xylitol. Vomiting is generally first, followed by symptoms associated with the sudden lowering of your dog’s blood sugar (hypoglycemia), such as decreased activity, weakness, staggering, incoordination, collapse and seizures. Check the package label to see if the product contains xylitol and call your vet immediately if it does.

As for eating chocolate, some pets develop severe complications, including liver failure, bleeding disorders and death. As with xylitol, if you suspect your dog has eaten chocolate, consider it an emergency and call your veterinarian immediately.

And keep your pets away from alcohol, which can cause serious problems. The most common symptoms are vomiting, diarrhea, incoordination, weakness, decreased activity, difficulty breathing, and shaking. In severe cases, coma and death from respiratory failure (lungs stop functioning) can occur.

Snacks are everywhere during the holidays.

Food bags, especially the mylar-type potato chip, cereal, and snack bags, can be dangerous for your pets and dogs, especially, may sniff them out. These bags are thin enough that if a dog puts his head far enough into one and breathes in, the bag can wrap around his nose and mouth, suffocating him. Make sure that snack bags are closed and put away in a cabinet or, if empty, tossed into a trash bin that your pets can’t get into.