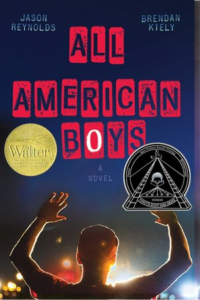 All American Boys, by Jason Reynolds and Brendan Kiely
Recommended especially for Grades 7 – 9 and older

“Rashad is absent from school again today.” At the local high school, this heavy sentence is written on the ground where everyone walks, where everyone will see it and be reminded. Rashad should have been there, attending classes, basketball practice, junior ROTC, and having fun with his friends. Instead he’s in the hospital, suffering.

Paul is a local police officer whose younger brother goes to that high school. Paul decided that Rashad was shoplifting. Then he thought Rashad was resisting, so he violently arrested him. In fact, Paul used his fists so violently that he put Rashad in the hospital with serious injuries. It was all a tragic mistake that sets in motion so many life-altering consequences throughout the community.

Rashad is an active and happy 16-year-old, and yet he knows he’s sometimes been treated differently because he’s Black. And so has his older brother. When he regains consciousness at the hospital, he’s surrounded by his parents and brother. He slowly reacts to the growing accusations in the community that the officer’s act was racist. Friends, teachers, the basketball team, acquaintances, strangers, everyone takes sides as the news spreads the story. Then the video from the corner store goes viral on social media. And then, there’s the eyewitness.

Quinn is also on the basketball team. He happened to be at the store when Rashad was attacked and witnessed it all. The violence shocked him, even more terrifying when he recognized that the officer was Paul. Quinn knew Paul so well, at least he thought he did. They live on the same street. When Quinn’s father had been killed in Afghanistan, Paul had taken Quinn to heart almost like a father figure. Quinn had never seen Paul like this, or had there been hints of this before? Quinn is white, like Paul, but suddenly he’s questioning his loyalties in the midst of erupting racial tensions.

“I could stay here or I could move all the way to California and I would still be white. Cops and everyone would see me as an All American Boy.” Quinn has discovered that all American boys are not treated the same.

What is so incredible about this book is the realistic descriptions of the variety of different characters’ thoughts, actions, and reactions. There are incredible insights and glimpses into their personalities and why they react the ways they do to the painful arrest and the resulting events. Even Rashad’s parents each have surprising responses. It’s not just the characters and the story that are so page turning. It’s the art of the writing, where you are hanging on every word, the alluring rhythm of the sentences, and the compelling turns of phrase.

All American Boys is a 2016 Coretta Scott King Author Honor book, and recipient of the Walter Dean Myers Award for Outstanding Children’s Literature. The authors have great respect for their readers, and give them a realistic, tense story that is thought-provoking and conversation-starting. The characters are memorable, and many feel like people that you want to be friends with.

Author Jason Reynolds is a New York Times bestselling author and the National Ambassador for Young People’s Literature. He is a Newbery Award Honoree, a Printz Award Honoree, National Book Award Honoree, a Kirkus Award winner, a two-time Walter Dean Myers Award winner, an NAACP Image Award Winner, and the recipient of multiple Coretta Scott King honors. He’s the author of many books, as well as poetry. Find out more about this engaging author at JasonWritesBooks.com. He will be the keynote speaker at the Pacific Northwest Writers Association Virtual Conference’s Young Author’s Day on Saturday, Sept. 26.

Wendy Kendall is an author with The Wild Rose Press. Her mystery ‘Kat Out of the Bag’ is available as of April 13, 2020. She is also a volunteer at the Friends of the Edmonds Library