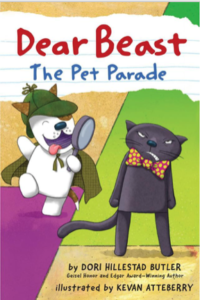 Dear reader, did you know that some pets and animals in backyards and front yards write letters to each other? They are very nice letters, as you can see for yourself in Dear Beast. How do they deliver their notes? Often by the efforts of snail mail.

Hip hip hooray for the pet parade. Andy has marched in the parade several times. He dresses up in costume. Simon his pet cat has paraded with him, not because he wants to but because Andy wants him to. This year Simon writes Baxter the pet dog a letter. This fun dog loves to play. He is nicknamed Beast. Simon’s letter is an invitation for Beast to join Andy this year. That way Simon will not have to dress in costume and go. Will Beast accept? Or will he have a bone to pick?

In a back and forth of letters, preparations for this year’s costume parade get started. There is much excitement and curiosity. Simon writes Beast that he wants to know more, but details drag. The cat decides to investigate among Andy’s other pet animals and even animals in the yard. They are very clever with their animal instincts in the different ways they uncover clues and write back with their information about what they think is happening.

At the heart of this story is how much the animals love their boy Andy. They want his parade to be a happy one. Their love is matched by the love Andy feels for all the animals, and how he enjoys special and different times with them. The letters between the animals are all so funny. They like to joke and laugh and tease. Each letter writer puts their own personality into what they write. And through it all you can read between the lines to recognize how much the animals care for each other too. They are a community.

By the time you finish reading Dear Beast, you’ll want to sit and write a letter of your own to a pet or to an animal you know in your neighborhood. There aren’t as many letters now as there used to be, but a letter is a wonderful way to make someone else feel good. Maybe you can be one of us who make more letters in the world.

Illustrations by Kevan Atteberry are truly a delight on every page. They picture each character with such expression. The pictures of each of the letters show hints about the character doing the writing. Seeing the illustrations enhances the fun of the story.