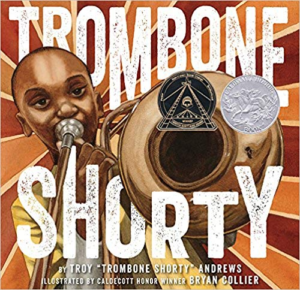 Where y’at? This fun, true story will transport you magically into the midst of a New Orleans neighborhood. This wonderful book describes the city in such exceptional language it stimulates your imagination and your senses – the smells of the cooking, the sights of the people, the feel of the objects around the city including the instruments played by the bands, and especially the sounds of the lively music, “we always had a lot of music.”

Beyond the setting, the adventure is also very exciting. It’s a true story of the young boy Troy Andrews, known as “Trombone Shorty.” It tells of the dream he had about becoming a musician, how he got his unlikely start, and his nickname, and the things he did to get started on the road to achieving his dream. Practice. Practice. Practice. He enjoyed practicing because he could hear his music start to sound better. He even inspired his friends to play music too, and they formed a band to play together.

The text and the character are both very exciting, and there’s a splendid surprise at the end of the story that will delight readers. The amazing illustrations appear so life like and enhance what the imagination has conjured up. Especially for young readers who may know little about New Orleans, or about music, this is a delightful introduction. The story’s message about the importance of following your dreams is very inspiring.

Be sure to also enjoy the included CD. Not only is it an audio book version, including ruffling page sounds to indicate when to turn the book page, but it delights with New Orleans music. What better way to show the success of following your dreams than to tell the story of Troy Andrews as a little boy and include on the CD the incredible music of Trombone Shorty as an adult.

Troy “Trombone Shorty” Andrews is a Grammy-nominated multi-instrumentalist. If you’ve ever heard him in concert, and with his Orleans Avenue band, you know his genius. He’s released multiple studio albums and has received awards in recognition of his community service work with the Trombone Shorty Foundation and Music Academy. He is committed to preserving the musical heritage of New Orleans while providing music education and mentorship to underserved young musicians. He lives in New Orleans, and you can find out more about him on his website at www.tromboneshorty.com  And if you like this book, you’ll also enjoy his other children’s books. 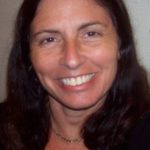 Wendy Kendall is an author soon to be published by The Wild Rose Press, project manager and volunteer at the Friends of the Edmonds Library