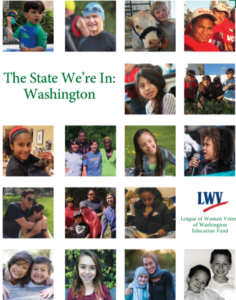 The League of Women Voters of Snohomish County has been distributing copies of The State We’re In: Washington civics textbooks to local school districts and public libraries.

Written for grades 3-5, The State We’re In: Washington, is also available online for free.

The goal of the project, the league said, is to reach a greater audience for civics education across age groups and geography in Snohomish County. Among those receiving the books were Sno-Isle library branches, with 20 new copies now in public library circulation. In addition, school districts countywide — including the Edmonds School District — received books.