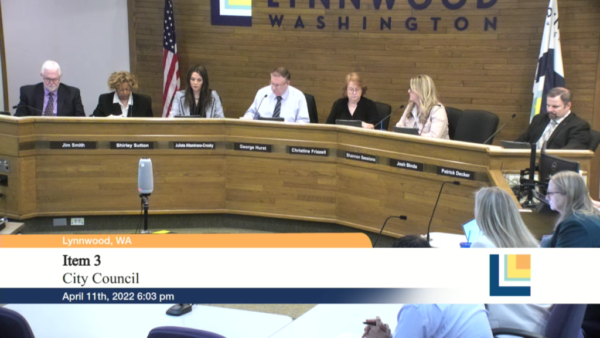 During a short business meeting April 11, the Lynnwood City Council tabled the idea of setting limits on virtual attendance for councilmembers.

A month ago, the council – which is now meeting in person – planned to limit virtual attendance for its members to three per year. However, due to Gov. Jay Inslee’s emergency orders related to the COVID-19 pandemic, it was unclear whether the council could implement such restrictions.

Councilmember Jim Smith Monday night moved to table a motion that had proposed those limits, and it passed 5-2, with Councilmembers Josh Binda and Shannon Sessions voting no. As a result, there are no limits on how many times per year councilmembers can attend meetings virtually rather than in person in council chambers.

In other business, the council unanimously passed the proposed licensing fees for redacting police-worn body camera footage. This fee, according to Deputy Chief of Police Chuck Steichen, will only cover the cost of labor for the individual redacting the video.

Redacting body camera footage will now cost 98 cents per minute, or $58.94 an hour. These fees will not be imposed on certain parties, such as defense attorneys or any other direct parties who are involved in these incidents.

In addition, the council also voted unanimously to amend the updates to the Title 5 portion of the Lynnwood Municipal Code (LMC), which governs city business licenses.

Council approval came after an amendment, proposed by Councilmember Patrick Decker and passed unanimously, fixed language that would have assessed a daily misdemeanor charge to Lynnwood businesses for each day they operated without a license.

Addressing Decker’s concerns about the original wording, Lynnwood Economic Development Director David Kleitsch said the city’s intent wasn’t to fine businesses daily– the language was simply incorrect. The city’s goal is to ensure that Lynnwood businesses acquire their licenses in a timely manner, he added.

According to Murray, the City of Lynnwood strives to be business friendly, which is why it hasn’t until now proposed adding monetary penalties to the licensing requirement.

“We have to have something else where [businesses] take it seriously,” she said.

Under Decker’s approved amendment, businesses who avoid purchasing a business license can be cited for a single misdemeanor, which cannot exceed a $1,000 fine or 90 days in jail.

“The ability to appear for court virtually has actually been beneficial for a lot of our court participants,” Bouffiou said. “It’s provided greater access to justice for those people who were most impacted by the pandemic, such as individuals who are medically vulnerable. People who have been unable to take a day off of work or school, people who don’t have access to child care and people who haven’t had access to transportation are all now able to appear for court.”

Along with lagging audio and video and blank spots in court recordings, the equipment is also not compatible with Zoom, which is what the court has been using. Right now, the court is using two separate systems to try to facilitate virtual hearings.

The motion to provide funding for the court’s upgraded technology passed unanimously.