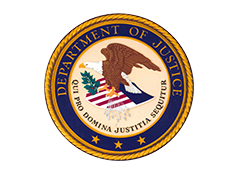 According to the criminal complaint, on July 19 and 20, Joey David George allegedly telephoned a grocery store in Buffalo, New York, and threatened to shoot Black people in the store. George then called a second time, allegedly ranting about a “race war.” Law enforcement officers traced the phone number and identified George as the person who made the call.

“The Buffalo community is trying to heal from the horrific shooting at a Tops grocery store,” Brown said. “I cannot imagine the type of fear such hate-fueled threats engendered in those just trying to go about their daily lives. We cannot tolerate this kind of hate in our community and will not sit by while people seek to terrorize others across our country.”

In addition to the calls to Buffalo, George is being charged in connection with a May 2022 call to a restaurant in San Bruno, California. In that call, George allegedly threatened to shoot Black and Hispanic patrons in the restaurant.

The criminal complaint also describes other threatening calls George allegedly made over the last 12 months to businesses in Maryland, Connecticut and Washington State, where George allegedly used racial slurs and threats to shoot customers at the businesses because of his racial hatred.

George was scheduled to make his initial appearance on the criminal complaint Friday, July 22, at 2 p.m. He is being held at the Federal Detention Center at SeaTac, Washington, pending further court hearings.

The case is being investigated by the FBI with the assistance of multiple local police departments.