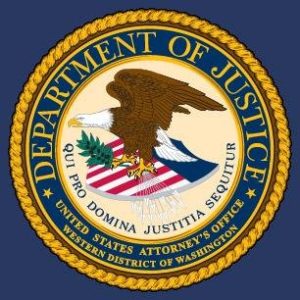 A 37-year-old Lynnwood man pleaded guilty Monday in U.S. District Court in Seattle to making interstate threats and a hate crime, U.S. Attorney Nick Brown said. Joey David George has been in federal custody since his arrest on July 22, 2022. In his plea agreement, George admitted he made threatening telephone calls from or near his home in Lynnwood to grocery stores in Buffalo, New York, restaurants in California and Connecticut, and a marijuana dispensary in Maryland. Sentencing is scheduled in front of U.S. District Judge Ricardo S. Martinez on Dec. 16.

According to the U.S. Attorney’s Office, George was officially charged with a hate crime: interference with a federally protected activity. Under federal law, it is crime to use — or threaten to use — force to willfully interfere with any person because of race, color, religion, or national origin and because the person is participating in a federally protected activity, such as public education, employment, jury service, travel, or the enjoyment of public accommodations, or helping another person to do so.

According to the plea agreement, on July 19, 20 and 21, George telephoned multiple grocery stores in Buffalo, New York, and threatened to shoot Black people in the stores. George told the staff at the store to “take him seriously” and ordered the store to clear out the customers as he was “nearby” and “preparing to shoot all Black customers.” One store closed. The threats followed a racially-motivated shooting at a Tops grocery store in Buffalo in May 2022. Law enforcement traced the phone number and identified George as the person who made the calls.

In addition to the calls to Buffalo, George admits that in May 2022, he called a restaurant in San Bruno, California. In that call, George allegedly threatened to shoot Black and Hispanic patrons in the restaurant. He told law enforcement that he made the threat to strike fear in the Bay Area Black community.

On Sept. 11, 2021, George called a cannabis dispensary in Rockville, Maryland, and used racial slurs as he threatened to shoot and kill Black people at the business. George admitted his racial hate to local law enforcement, who used caller ID to trace the call. The dispensary shut down and hired extra security, causing a loss of over $50,000. On that same day, George also called a Denny’s restaurant in Enfield, Connecticut, and threatened Black patrons at the restaurant.

In his plea agreement, George agreed to pay restitution to the impacted businesses.