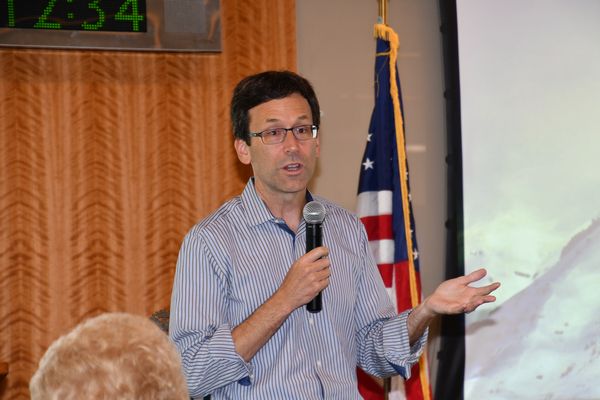 Two-term Washington State Attorney General Bob Ferguson paid a visit to the Lynnwood Rotary on Thursday where he provided an overview of the roles and functions of his office, and then talked about some specific cases. Accompanying Ferguson was his 11-year-old daughter Katie — a softball player who was scheduled for a pitching lesson right after the meeting, with her father serving as catcher.

“I’ve been to probably 160 Rotary meetings since I became attorney general in 2012, but this is Katie’s first,” quipped Ferguson as he began his remarks. “Being catcher for her coaching sessions is a real treat for me, but her fastball is getting harder to catch all the time.”

Ferguson described the structure and role of the Attorney General’s office.

“We are the largest law firm in the State of Washington,” he began. “We have 13 offices across the state with more than 1,000 employees, 600 of which are attorneys. Although you might not hear much about it, our largest workload is in the area of dependency hearings where we advocate for children who are in a home situation where there is abuse or neglect. The State Legislature assigned us this role back in the 1970s, and 100 of our attorneys handle this work exclusively. It’s all they do every day.”

He went on to explain that the primary duty of the Attorney General’s office is representing the State of Washington, which means that each department, commission, etc. is a client. Another important client, he said, is the people of the State of Washington, with cases including consumer protection, civil rights, anti-trust and criminal justice, some of which are conducted on the national level.

“My job is to enforce state law regardless of whether I agree with it or not,” he stressed.  “As an example, I am personally opposed to the death penalty, but back when it was law, I vigorously enforced it.”

He went on to point out the long record of staff consistency in the Washington State Attorney General’s office. When Ferguson he took over from previous Attorney General Rob McKenna in 2012 he asked all of McKenna’s deputies — who head up the major divisions of the office — to stay on, despite the fact that he and McKenna come from different political parties.

“I don’t know their political affiliations, I don’t ask and I don’t really want to know,” he said. “What I do know is that they are professionals who know how to run an independent, non-partisan agency.”

Moving on to current activities, Ferguson first addressed what his office has done and is doing in response to the opioid epidemic.

“On average, two people die every day in Washington state from drug overdoses,” he began. “Currently there are enough opioids prescribed here for every man, woman and child in the state to have a 27-day supply. Our office was one of the first to file litigation against the pharmaceutical companies who produce it. Our case against Purdue, manufacture of oxycontin, is based on our belief that they marketed their product in an unfair and deceptive manner — and that’s putting it mildly.” The trial in that case is set for February, McKenna said.

The state is also filing suit against three distributors of opioids, all Fortune 15 companies, he noted. Under state law, these companies have a legal obligation not to ship suspicious orders — for example, unusually high quantities to a small area. “Despite this, our suit documents that they shipped more prescriptions to several Washington state counties — not individual pills, but full prescriptions — than there are people in those counties, putting their profits above the human toll, Ferguson said. “I have no idea how those CEOs sleep at night. Parents have lost children.”

In the area of consumer protection, Ferguson cited the recent case against Comcast, which was tacking a $5-per-month service protection plan onto cable bills.

“We had numerous questions to our office from consumers across the state asking what this charge was about,” he explained. “Many customers told us they had specifically declined this service, but Comcast billed them anyway. Many others just had it added to their bill without first being asked. That’s what we call an unfair and deceptive business practice.

“Comcast offered millions to settle the case, but I said ‘no, we’ll see you in court,’” he continued. “They flew out an army of D.C. lawyers, and after a multi-week trial the judge determined that Comcast had violated the Washington State Consumer Protection Act 440,000 times. Comcast is now paying millions in penalties, plus making restitution to customers.”

During the question-and-answer session, Ferguson responded to an audience inquiry about the recent Johnson & Johnson opioid ruling. He explained that this case was handled by the Oklahoma Attorney General, and he had decided to go after Purdue since the company is a much larger player.

Addressing a question about his office’s role in litigating against the federal government in immigration cases, Ferguson explained that immigration policy is set by Congress, and the state will only litigate it if it can establish that Washingtonians are being harmed.

“In the case of the Muslim travel ban, we were harmed because universities and colleges had students with green cards coming from these countries who could not come here to attend school due to the travel ban,” he explained. “Students presently here could not travel back home, and students who were out of the country at the time could not get back in. We maintained that this qualifies as harm to the State of Washington, and the judge agreed.”

He was also asked about enforcing initiatives including the recent restrictions on gun purchases and the measure legalizing marijuana.

“When an initiative is passed, we treat it like a law — it’s my job to defend it whether I agree with it or not.”

With time running short, Ferguson wound up his remarks and made a quick exit with Katie for softball lessons and catching duties.

— Story and photos by Larry Vogel