Lynnwood Today continues its look back at 2019.

Four teen passengers were injured in a DUI-related vehicle rollover crash Nov. 2 on Interstate 5 near the 196th Street Southwest exit. A 21-year-old male was driving under the influence when the vehicle struck an embankment and trees before rolling over multiple times and stopping 10 feet from the roadway.

On Nov. 2, Lynnwood Today reported that Edmonds School District officials heard concerns from students, teachers and parents during a recent business meeting about plans to bring a campus police officer to Scriber Lake High School. Some parents questioned the effectiveness of cops on campus and said they were concerned about the effects an armed police officer would have on Edmonds Heights K-12 students. Edmonds Heights shares a campus with Scriber Lake.

Two children died in a house fire on Nov. 3 at the Lynnwood Town House apartments. The two-alarm blaze engulfed the two-story building and caused columns of smoke visible from miles away. An 11-year-old child who managed to escaped the fire was reported to have been injured. The victims — a 7-year-old boy and a 15-year-old girl — were later identified as Shoreline residents who were visiting family.

On Nov. 4, Lynnwood Today reported about Faith Murray, a Lynnwood High School student who suffers from a rare bone disease, and her role on the Royals swim team.

At its Nov. 4 work session, the Lynnwood City Council heard an update from a group of city employees who are participating in the Government Alliance on Racial Equity. a national network of government employees working to achieve racial equity and advance opportunities for all.

Early results from the Nov. 5 general election reported that Lynnwood City Council candidates Julieta Altamirano-Crosby, Jim Smith, Shannon Sessions and George Hurst led the polls for their respective positions. In the race for the Edmonds School Board of Directors, newcomer Nancy Katims was winning the race for her position, along with incumbent Directors Carin Chase and Gary Noble.

On Nov. 7, Lynnwood Today reported about the Edmonds School District’s first Doctor for a Day event — a University of Washington program aimed at encouraging students of color to explore careers in medicine. During the event, more than 70 students were able to participate in hands-on activities to learn about careers in medicine.

In response to the passage of I-976, City of Lynnwood officials — as well as officials from other affected cities — scrambled to decide what the next step would be as they faced drastic transportation budget cuts. According to Lynnwood city staff, the initiative’s $30 car tab mandate will strip approximately one-third of the city’s Transportation Benefit District funding, which goes toward the city’s transportation infrastructure program. To learn more, read Lynnwood Today’s Nov. 10 story.

At a Nov. 10 Veterans Appreciation Dinner honoring local veterans, Lynnwood officials announced that the new Gold Star Families Memorial Monument will be installed in Lynnwood’s Veterans Park. In addition to the installation of the monument, Veterans Park will undergo capital improvements to enhance its aesthetics and functionality. The city’s parks and recreation team will work closely with local Veterans of Foreign War Post 1040 on the planned park improvements.

More than 300 veterans, family members and supporters filled a dining hall in the Lynnwood Convention Center on Nov. 10 to celebrate local veterans and their service to the country. The celebration was a collaborative effort between the convention center, the City of Lynnwood and the South Snohomish Veterans Resource Task Force. The event also celebrated the 244th anniversary of the incorporation of the U.S. Marine Corps.

At its Nov. 12 business meeting, the Edmonds School District Board of Directors held its first reading for the proposed Units of Study in Reading curriculum, which teaches students to read through classroom workshops. The curriculum is part of Teachers College Reading and Writing Project co-founded in 1981 by educator Lucy Calkins. During the meeting, the council heard mixed feedback from community members about the proposed curriculum.

At its Nov. 18 work session, the Lynnwood City Council held its annual Legislative Engagement Discussion, where the council and Mayor Nicola Smith invited representatives from local, county, state and federal agencies to hear about the work the city has been doing to become “a regional model for a sustainable, vibrant community with engaged citizens and an accountable government.”

After Northgate Mall closed to make room for a mixed-use development, Alderwood Mall saw an increase in business. From shoppers to senior mall walkers, people looking for a dry mall experience have migrated 10 miles north to the Lynnwood-based mall. On Nov. 24, Lynnwood Today reported about the effects the Northgate Mall closure has had on Alderwood Mall.

With a new volunteer board, the South Snohomish County Cold Weather Shelter now aims to provide a more sustainable service for the community’s homeless. Eleven volunteers now serve on the shleter’s board and are working to provide more focused attention to specific details when running the shelter. Read Lynnwood Today’s Nov. 26 story about the shelter’s efforts.

The Lynnwood City Council unanimously voted at its Nov. 25 meeting not to increase the city’s property tax rate and to keep the tax levy rate at 57 cents per $1,000 of assessed value — the same rate as 2019. With that rate, the city anticipates levying $4.3 million in 2020.

The Edmonds School District Board of Directors and district staff bid an emotional farewell to former-Board President Diana White at its Nov. 26 business meeting. White was elected to the board in 2014.

In response to the passage of I-976, Washington state Gov. Jay Inslee announced Nov. 26 that all city transportation projects in the state not yet underway were to be postponed. The announcement put projects like Lynnwood’s plans to widen 196th Street Southwest and other city projects in jeopardy.

The sixth annual Turkey Trot 5k to support the Lynnwood Food Bank on Nov. 28 drew record crowds and donations. The event attended by 199 participants who ran,  jogged or walked around the Lynnwood Municipal Golf Course at Edmonds Community College and raised $4,800 for the food bank — which will receive $4,000 after expenses are covered.

At its Dec. 2 work session, the Lynnwood City Council reviewed the final draft development agreement for the proposed Northline Village mixed-use development. The draft agreement included proposed amendments and feedback from council that was previously brought up at the council’s July 15 meeting. During the discussion, some councilmembers were concerned about the lack of assurances that the site will include affordable housing. 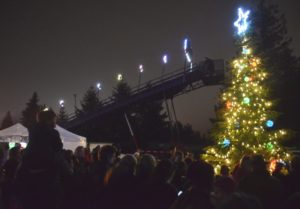 Hundreds gathered for Lynnwood’s annual Christmas Tree Lighting hosted by Silver Creek Family Church Dec. 7. Unlike previous years, the tree lighting did not signal the end of the ceremony and took place in the middle of the ceremony to give people more time to linger and enjoy the tree.

The Lynnwood-Alderwood Manor Heritage Association (LAMHA) hosted its annual Cookies with Santa event at Heritage Park on Dec. 8 where families gathered to take photos with Santa and Mrs. Clause. Also featured at the Wicker’s Building was an Honor and Remember Tree displayed in the building’s lobby, featuring photos of Washington state military veterans who died in combat.

After months of discussion, the Lynnwood City Council voted at its Dec. 9 business meeting to approve plans for the proposed Northline Village mixed-use development. Prior to voting on the ordinance, the council held a public hearing to hear testimony from residents who were concerned about the lack of assurance that the new development would offer affordable/low-income housing.

The Edmonds School District issued a letter Dec. 9 regarding student safety after a Meadowdale High School student reported that a man attempted to lure the student into his car.

During its Dec. 10 business meeting, the Edmonds School Board welcomed the newly elected and re-elected board members. Also during the meeting, the board heard support for the proposed reading curriculum.

The Students Saving Salmon clubs at Edmonds-Woodway and Meadowdale high schools gathered at the Willow Creek Fish Hatchery on Dec. 15 to place more than 5,000 Coho salmon eggs in specially designed hatch boxes which they would later submerge directly into the waters of Willow, Shell and Lund’s Gulch Creeks.

A Lynnwood man erected a Christmas tree in his front yard decorated with photos of local military personnel who died in combat and asked for the community’s help sending their families holiday messages by signing cards. Patrick Crosby partnered with the Washington state chapter of the American Gold Star Mothers and Campbell’s Tree Farm in Snohomish County to send cards with messages from community members to more than 70 military families. To learn more, read Lynnwood Today’s Dec. 17 story.

On Dec. 18, the Edmonds School District announced it received an anonymous $18,000 donation to pay off meal debt for nearly 2,000 students. The donation was made by the family of former Hazelwood Elementary School students who approached the school’s principal hoping to help the school. The family then decided to make a larger contribution after learning about meal debt in the district.

Nurses and caregivers at Swedish Hospital announced Dec. 19 that they were moving closer to an “imminent strike,” claiming that patient care and severe understaffing have worsened and executive pay has ballooned since Swedish was taken over seven years ago by Providence, Washington’s largest health care corporation.

On Dec. 30, Lynnwood Today reported that after 38 years Washington state’s emission testing program would end. Starting Jan. 2, emissions tests were no longer required in order to renew vehicle registrations. Washington’s Legislature set the wheels in motion to end the testing program back in 2005, when it adopted more stringent emissions standards for new cars and trucks. Those standards took effect in 2008, and vehicles 2009 and newer were exempted from the testing requirement. The program officially ended at the end of business on Dec. 31.