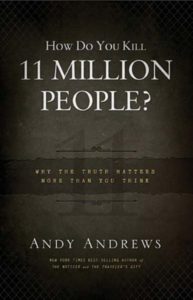 “How do you kill 11 million people?” That was the question posed by New York Times best-selling author of The Noticer and The Traveler’s Gift, Andy Andrews. It’s also the title of one of his books.

As one who has studied war history and had to endure reading the Psychological Operations manual more than once, I was curious to hear Mr. Andrews’ take on how countries can control and eliminate their populations.

By the way, controlling populations and perceptions is not new – ruling governments, tyrants, and cult leaders have been using these techniques for centuries. We as a nation certainly deploy these strategies and we don’t hide it. Straight out of the PSYOP handbook it clearly states, “PSYOP are a vital part of the broad range of United States (U.S.) diplomatic, informational, military, and economic (DIME) activities.” The goal of PSYOP is to influence the perception of others – intended to influence foreign perceptions, of course – and designed to save lives, when properly deployed.

But what happens when it isn’t “properly” deployed?

And what happens when a society ignores the truth or chooses to sit on the sidelines, cover their eyes, close their minds to other perspectives, and accept what they are told so their comfortable life isn’t disrupted?

It’s only a matter of time before you fall victim.

“How fortunate for leaders,” Hitler said to his inner circle, “that men do not think. Make the lie big, make it simple, keep saying it, and eventually they will believe it.”

In Hitler’s autobiography, Mein Kampf, he wrote, “The great masses of the people will more easily fall victim to the big lie than a small one.”

The book was widely read by most German people at the time – and yet they believed him anyway. Or maybe they just ignored him.

Until it impacted them personally. Between 1933 and 1945, 11,283,000 people were recorded killed by Hitler’s troops – that only represents the institutionalized killing.

I won’t bore you with the seven-phase process, but essentially a tactical component of a PSYOP mission is to create fear, then provide hope partnered with security, then begin to isolate or dehumanize outliers or individuals who oppose the desired outcome, and in drastic cases, eliminate the threat.

Mr. Andrews, to my knowledge, wasn’t versed in PSYOPS so I was curious how he would answer. His answer was almost too simple, but it was truth: “You lie to them.” That’s how you control or kill those you govern. You lie to them. Because most will “buy the lie” until it’s too late.

Am I suggesting PSYOPS are laced with lies? Only when they are not properly deployed. And that is why it is so important to seek truth. Not YOUR truth. But THE truth.

In these rapidly changing, ever accelerating times of chaos, confusion, division instead of discussion, 24-hour propaganda cycles, and politicians who lie to get elected, there is no greater time than now to seek the truth – even if it means you must change your mind. There are always two sides to every story. Seek both sides and apply discernment.

Today, we must pay attention to those who aspire to lead us at a local, county, state, and national level and truly listen to what they say and then watch what they do. Do they align with how you lead your family or the values you hold sacred? On a local level, are those who are seeking to lead align with your vision for your city?

You must get involved. Apathy leads to dependence. And dependence leads to bondage.

It was a decade ago that I sat in the room with several other individuals listening to Mr. Andrews talk about the truth and share the chilling story of how Hitler really fooled Germany – until it was too late and cost millions of lives. He then asked how it applied to America.

It was also a decade ago that his book, How Do You Kill 11 Million People, was published. And it is quite relevant – and maybe even prophetic of today’s environment.

I encourage you to read it. It is a quick read but leaves a very lasting impression. 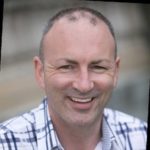 Mike Schindler is a U.S. Navy veteran and CEO of Operation Military Family, a 501(c)(3) veteran service organization that provides proven pathways for Veterans to discover and deploy their greatest gifts in family, work and life. Schindler is an award-winning author, the national podcast host of The Military Wire/VISION2020 and an effective trainer who has been featured in USA Today, CBS Radio, Entrepreneur Radio, the Lars Larson Show, the Boston Globe, Q13 FOX, Yahoo Finance, and others.