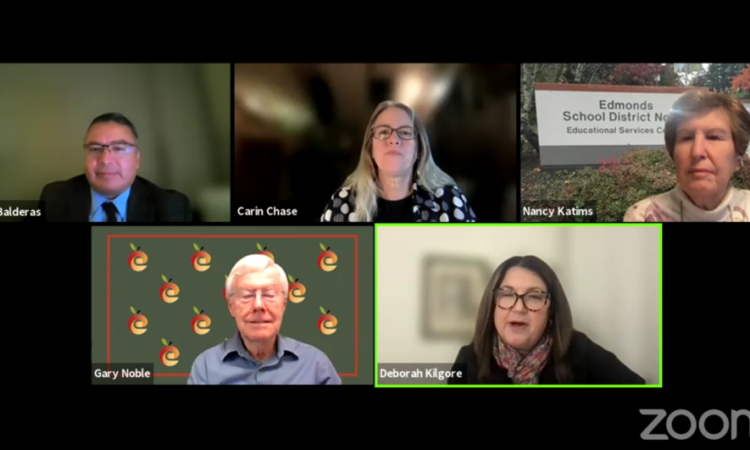 With more Edmonds School District bus drivers getting vaccinated against COVID-19, district leaders this week announced that all students who are eligible for bus routes will not lose their bus service.

At the Oct. 12 Edmonds School Board business meeting, Superintendent Gustavo Balderas briefed the school board on efforts to encourage district staff to get vaccinated before the state-mandated Oct. 18 deadline for all K-12 teachers and staff.

According to Balderas, approximately 88% of district employees have either been vaccinated or received a medical or religious exemption. During his comments, Baldeas praised staff’s work and said he was “on Cloud 9” that they would be able to continue to provide transportation services for students.

“I’m just happy we’re able to provide the service for our kids to get them back on campus,” he said.

However, the district still has gaps in some staffing areas and is actively trying to recruit substitute teachers, food workers and paraeducators. Human Resources Director Debby Carter said one area with the greatest need is paraeducators, where there are more than 50 open positions.

During the discussion, Director Gary Nobel asked how the Oct. 18 mandate would impact district employees currently on leave and whether they would need to be fired and rehired if they chose to get vaccinated. In response, Carter said that those staff could remain employed but need to show proof of vaccination or an exemption before returning to work.

The board also received an update on the number of reported and confirmed COVID-19 cases in the district. Over the past two weeks, 79 positive cases were confirmed, and seven classrooms were closed across the district.

Next, the board unanimously voted to approve an agreement to hire four professionals who would be dedicated to helping students with substance abuse issues.

In partnership with the Northwest Educational Service District 189, the new employees will work with middle and high school students who are dealing with drug and alcohol use and will also provide support groups for students. Per the agreement, each substance abuse professional (SAP) will provide support to a middle school and a high school in each quadrant as well as Scriber Lake High School and eLearning. They will also be available for classroom presentations on topics related to substance use and abuse.

The contract will be funded by a grant from NESD 189 and funds previously used to pay for the school resource officer program.

After an initial review of the contract, Director Nancy Katims had said she was concerned the language favored the NESD 189 by allowing them to back out at any time but said Tuesday those concerns had been alleviated.

“The contract now is more protective of the district,” she said.

In other business, the board received an update on the Teachers of Color (TOC) Foundation from Foundation President Diana White. White also served two terms on the Edmonds School Board, retiring from the board in 2019.

The TOC Foundation was formed in 2016 in response to the feedback received from students and school community members regarding equity in education. The district is comprised of 55% students of color, but the teaching staff is nearly 90% white.

“This (foundation) can only be found in Edmonds School District,” White said. “There’s no other school district in the nation that we’ve found that has a teacher-training program embedded within the district.”

Since its formation, the TOC Foundation has awarded annual scholarships to 12 scholars, four of whom have graduated and are teaching in the district. Six will graduate in 2021. The remaining scholars will graduate in the next year or two. The scholarship program did not add any new scholars in 2020 due to the pandemic.

During her briefing, White read feedback from one of the foundation’s scholars who — in a letter — praised the foundation and said it made him feel supported and encouraged.

“I felt that I have been given the tools to succeed,” he said. “You are not only helping me, you are literally helping change the face of education.”

The board also voted to approve several consent agenda items including:

-A tentative bargaining agreement between the district and the Public, Professional and Office-Clerical Employee and Drivers Local Union No. 763.

-A COVID-19 vaccination agreement document between the district and the Public, Professional and Office-Clerical Employee and Drivers Local Union No. 763, effective Oct. 18, 2021.

-An interlocal agreement and membership with Choice Partners for services like evaluating business contracts to determine whether they meet the requirements of district policy/procedure.

-A contract renewal for the interlocal agreement between Edmonds College and the district regarding the Edmonds Career Access Program (EdCap).

-An interlocal agreement between the district and Snohomish County, regarding the Puget Sound Taxpayer Accountability Act.

-An agreement with Brock’s Academy for special education services and to provide an alternative placement, if needed, for students with disabilities for the 2021-22 school year. Three students are expected to require services for a total of $294,498.