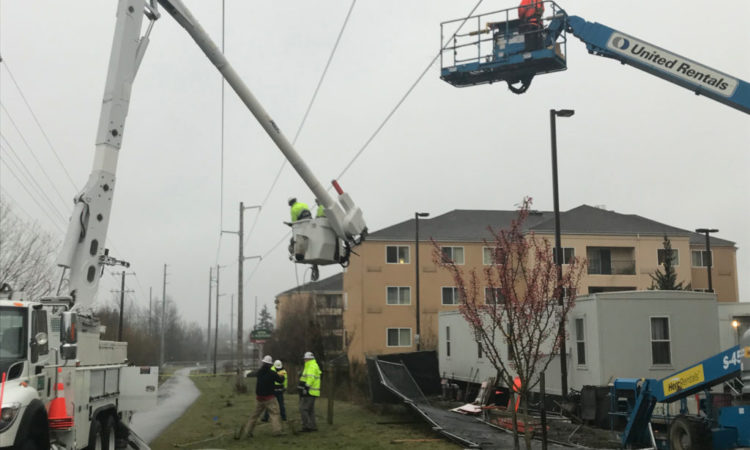 No injuries were reported during the electrical incident that occurred Monday morning near the multifamily housing development located at 4100 Alderwood Mall Boulevard, according to South County Fire.

Around 7 a.m., dispatch received multiple reports of seeing a “flash and hearing an explosion” when a lift truck came into contact with a power line near the Kinect @ Lynnwood development, said South County spokesperson Leslie Hynes. According to Hynes, the flash could be seen from Interstate 5.

One man was on the lift truck when it came into contact with the power line. Snohomish County PUD arrived on the scene and grounded the power, then used a lift truck to bring the worker to the ground. Hynes said he was then transported to a local hospital as a precaution.

“The man was able to walk to the medic unit,” she said.

Additionally, Hynes said electrical panels at the construction site and a nearby utility box were damaged as a result of the incident. By the time crews arrived, PUD spokesperson Aaron Swaney said lines in the area were not running any electricity.

“Our lineworkers verified that they were de-energized and then helped get the worker down,” he said.

The location is listed as the future site of Kinect @ Lynnwood — a 239-unit residential building that includes seven floors. A total of 20% (or 48) of the units will be listed at a reduced price, with the rest at market value. As of now, only three stories have been built.

This is the second incident to occur at the site. A construction worker was seriously injured last November after a wall fell on him.