Mayor Frizzell started the event by giving thanks to every person involved in making the Orange Line a reality for the people of Snohomish County. Because of the new line, Frizzell said, the county is one step closer to being completely connected by transit.

“We’ve envisioned this for decades,” Frizzell said. “Lynnwood is changing and growing right in front of our eyes. We’re [one step closer] to a whole and better-connected community.”

The 11-mile Swift Orange Line will officially open in 2024 and will connect the existing Blue and Green Lines with the new Link light rail extension coming to Lynnwood in 2024. Buses will arrive every 10-12 minutes on weekdays and every 15-20 minutes on weekends.

Federal Transit Administration (FTA) Administrator Nuria Fernandez also took to the podium to thank the Biden-Harris Administration and all the local mayors for working so hard to make transit more readily available for citizens.

“This is about giving the taxpayers what they deserve,” Fernandez said. “This milestone is just the beginning, but it’s the beginning of the future, [and] everyone is invited to join this journey.”

Like the existing Blue and Green Lines, the Orange Line earns the title “swift,” because it will only stop at each station for a short 10 seconds. Passengers must prepay before getting on to keep the stops concise. 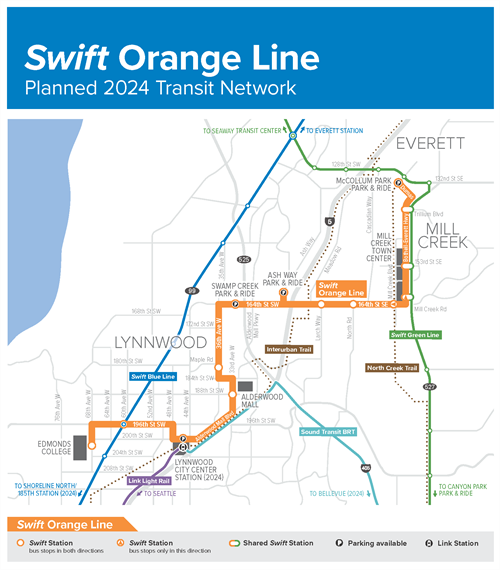 Sen. Murray said that adding the Swift Orange Line has taken years of collaboration and tireless work, and she’s thrilled to see it being launched. Having reliable transportation systems make a huge difference to thousands of citizens, she said.

“This means one less worry for that single mom here in Lynnwood working long shifts,” Murray said. “That young person without a car can apply for that job across town because they have that reliable transit system they can count on.”

Murray thanked each person who came out to witness the groundbreaking, saying everyone played a part in making this monumental task happen.

“It’s because of you that we are all here today,” Murray said. “This is about building a stronger, more connected economy and community.”

Not only is the Orange Line providing more reliable transportation to the people of Snohomish County – officials say it’s also helping keep traffic off the crowded roads. With faster, more reliable bus routes, it’s anticipated that many people will opt to ride the bus rather than drive, especially due to rising gas prices.

Inslee also thanked everyone who had a role in bringing the project to fruition.

“You don’t just [get here] by wishes and dreams and aspirations,” he said. “You do it by work. Lots of hard work.”

The governor added he hopes the motto for Washington State’s transportation system growth will be like a movie he recently saw: Everything, Everywhere, All at Once.