We talk about social media algorithms a lot these days, mainly because my youngest asks to watch Instagram reels with my husband some nights in hopes to delay bedtime. Some nights they just have a bad algorithm and don’t get any good videos and some nights their video sesh is oohs and aahs, oh nos, and I gotta show this to Mom. At the end of this week, I was on a good life algorithm, a fake thing I made up, despite a general crankiness brought on by the onslaught of evening school events, school emails that require action and possibly my personality.

On Friday, after school drop-off and before a Zoom class, I stopped on Sunset to look at the water and the birds and found the harbor seals resting on something floating north of Brackett’s Landing North. I’ve caught them a few times recently, and I often stop for a few minutes between school and stuff I don’t want to do next, and I find their posture to be comforting for some reason. They’re just all cuddled together, round and unbothered with their tails up.

After the seal sighting, a familiar group of walkers strolled by with a dog I recognize. Now I know this is a kooky statement, but… when we were looking to adopt a dog, this wiry wonder was at PAWS and came up in a million searches and we saw it at least once in person. A few months later, I ran into the dog and its owner and asked if this was the same dog — and it was! I had such a soft spot for this little one, but the info said “no kids” so we couldn’t move forward. (The owner explained that this didn’t end up being the case.) It is such a good memory and so fun to see a dog you met and who had to hang out in a cage now lives with someone who often takes them on a group walk.

No matter what your algorithm on social media is, you’re going to see bad or harsh news. But my feed — in between school emails — has had some good stuff too. So I’m going to share all that this week in hopes of paying it forward and parlaying the good vibes — are the kids saying that? — for as long as I can.

An email from Sno-Isle Libraries announced a virtual evening Family Storytime because “attending a daytime Storytime event can be tough with your busy schedule.” Finding a Storytime when my youngest was in the age group was so tricky for our work schedules and school drop-off for the older one. We did manage to race to one at the Lynnwood Library, occasionally, that was a midpoint between my commute home — yes, at 9 a.m. — and my husband’s delayed commute to work, but by the time we all made it, we were often spent. I am also excited about this option for those with young ones who love a storytime and don’t love a circle time set up.

On Tuesdays from 6 to 6:45 p.m., you can join Online Family Storytimes with Alex and Danielle for “stories, songs and rhymes that the whole family will enjoy” while preparing your youngsters “for the wonder of reading.” The library offers a full list of upcoming events, both online and in-person, including those in Spanish and Korean. 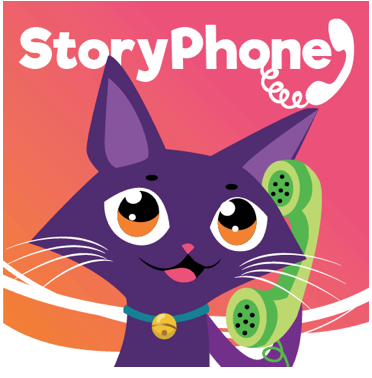 In the same email, I saw that they also offer a StoryPhone?!? You can dial 360-651-7171 ANYTIME to listen to children’s books, songs and rhymes presented by library staff, with no internet required. There is new content each week for ages 4 to 9 (and the whole family) with options for stories in English, Spanish, Korean and Russian. For more information on Storytimes and all other library programs, you can visit Sno-Isle.org. 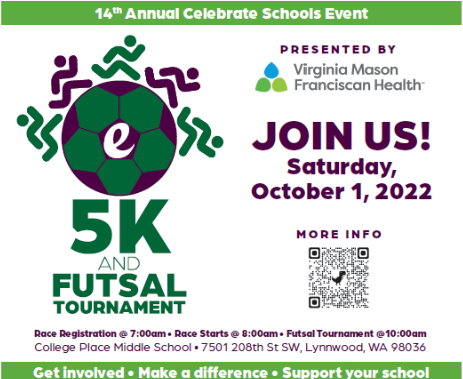 The Foundation for Edmonds School District’s 14th annual Celebrate Schools 5K and inaugural futsal tournament is happening on Oct. 1 at a new location! The high-energy festivities will be at College Place Middle School, at 7501 208th St. S.W. in Lynnwood, The event is a fundraiser benefiting local schools and important foundation programs that help children, families and teachers in the Edmonds School District.

The race starts at 8 a.m., and the foundation is expecting 1,800 runners with students, community members and businesses encouraged to join to help raise money for ESD schools. They are also debuting a futsal tournament this year, which starts after the race at 10 a.m. K-8 students can join a team for this “mini version of soccer” played on a smaller field and featuring three age brackets. The event will have emcees, including a former colleague and all-around good time KXA’s Stitch Mitchell. There will also be Edmonds School District high school drum lines, which will be my favorite part but also be why I’m wrangling a uniform before lunch on a Saturday. For more information and registration, you can visit EdmondsFoundation.org.

I was excited to see on My Edmonds News that Halloween Trick-or-Treat night will return to downtown Edmonds this year on Monday, Oct. 31, from 5 to 7 p.m. After a two-year hiatus, the Edmonds Chamber of Commerce is advising local businesses “get your costumes ready and dust off those huge cauldrons for the great candy giveaway of 2022.” To learn more, visit EdmondsHalloween.com.

One of the first posts I saw was from Edmonds Parks, Recreation and Cultural Services. They showed some progress on downtown’s Civic Park, which we slowed down to gawk at last weekend — mainly progress on the inclusive playground on the 7th Avenue side. Replying to a question on social media, they said that “due to supply and labor issues our opening date has been pushed back,” but are “keeping their fingers crossed” for an early spring opening. For more information on the genesis of the playground, you can visit MikasPlayground.org. 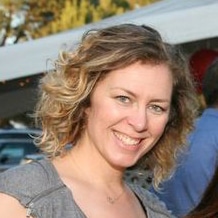