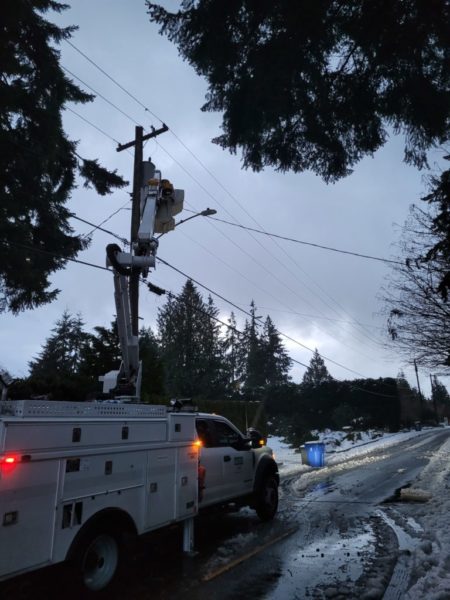 Updated with additional details about the City of Lynnwood storm response.

Snohomish County PUD spokesperson Aaron Swaney said that about 28,000 PUD customers were without power Wednesday morning, with most of them in the areas of Edmonds, Lynnwood and Mountlake Terrace.

“We are looking at some significant damage to our system, including trees down across wires and poles down, in the southwest portion of the county,” Swaney said. “We have more than 30 crews out in the field currently, but road conditions are challenging and are currently slowing down our processes. ”

Customers can check the status of outages and report one at the outage map link.

Many residents reported seeing flashing lights and loud bangs in their neighborhood, which they assumed was a blown transformer. Swaney said that nearly all of the time it is due to the cutout or fuse that is opening up in the power pole, often caused by an animal or falling branch. “This ‘opens’ the circuit and de-energizes the lines due to a fault somewhere along the circuit,” he said.

The Lynnwood Recreation Center, City Hall and the Municipal Court were open Wednesday.

Lynnwood road crews applied de-icing brine to the roads on Monday in anticipation of the inclement weather and worked in the heavy snow and rain throughout the night, with a focus on the main arterials, City of Lynnwood spokesperson Nathan McDonald said. Wednesday morning, a new crew came in to clear snow and slush from the roadways. Crews are now working on getting as much of it off the roads before temperatures dipped again Wednesday night, he said.

“We have four plows working around the clock to clear the roads quickly and safely,” MacDonald said. “Please give crews plenty of space if you are out on the roads.”

Parks crews have also been out assessing and addressing the damage in city parks, specifically downed trees and limbs, he added.