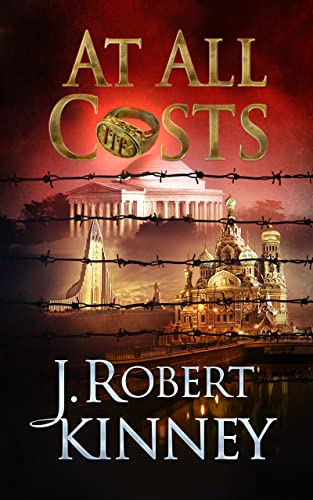 At All Costs: The Volya Series, by J. Robert Kinney

Evil and ruthless terror spreads worldwide from the Nasha Volya, a dangerous and illicit organization growing stronger than ever before. Their reach is worldwide. Can a U.S. congressman be working with them too? Franklin Holt and his small team of three freelancing federal agents vow to stop this menacing group, once and for all. If unsuccessful, their cost is the ultimate price. This team fights a mission to make the world safe, although they stand now at a huge disadvantage. Framed for crimes they didn’t commit, the team members are separated, and now operate from the shadows: from behind bars, and on the run. They are hunted by both the law and the Volya, yet their fight goes on to accomplish their mission At All Costs. How can they coordinate their efforts? Can they stop the dire threat in time?

Author J. Robert Kinney has created a thrilling Volya series. In this third book of the series the stakes stab through the heart and soul of civilization, and time is running out. This fight for justice and freedom propels Franklin and his band — Sloan, Shannon and Eve — to different destinations around the world. Franklin was never trained for what he must face. In fact, all their skills are taxed. Nevertheless, the chase is on. They must stop the Volya and unearth the truth before countless innocent lives are lost. Everything is at stake. This time none of them are prepared for what this battle will cost, or the ghosts from the past they’ll resurrect.

The pacing of this thriller is high-speed action and there are many surprises around the corners. The plotting is skillful. There is more that this author has woven into this story of intrigue. Author J. Robert Kinney has thoughtfully breathed life into these characters. Their motives and personalities are fascinating and compel them in their actions. As the story continues, more clues about the characters are artfully revealed. The history and human nature behind the Volya are as gripping as the lives of the other characters.

The tension, suspense, and chills in this story will have you under an adrenaline spell throughout.

Dr. J. Robert Kinney is an award-winning suspense/thriller author. His published novels include the award-winning trilogy, The Volya Series. The second in the series, Ring of Conspiracy was named the Best Suspense of 2020, winning the Silver Falchion from the Killer Nashville International Writers Conference. His most recent, At All Costs was a finalist for the Claymore Award for Best Upcoming Thriller. With a Ph.D. in political science, with specialties in international relations and terrorism studies, as well as degrees in psychology and forensic science, Kinney has worked in research for a government contractor, in federal public policy in Washington, D.C., and taught university courses on global politics.