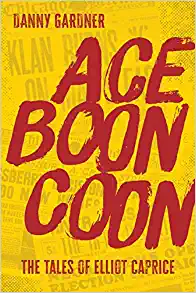 The next of the Tales of Elliot Caprice series is the new book Ace Boon Coon. This is a detective novel that addresses issues of race and class by building these issues seamlessly into the dramatic plot. What results is a totally unique detective in Elliot Caprice, an intriguing read, and fascinating characters. This is a super sequel in a historical crime fiction series about a disgraced police officer caught in a world caught between Black and white, where murder exposes a clash of greed and competing interests.

Set in 1950s rural Illinois, Elliot Caprice returns to help his uncle save the family farm during a terrible drought. Elliot is pulled into more than he bargained for when a murder draws him back to Chicago. Twists keep Elliot investigating as he resolves to find answers, and to save those he cares for the most. Once Elliot Caprice is challenged, he doesn’t back down. As one of the characters sums it up, “It’s his backbone . . . Sometimes it gets to him.”

This author is a Chicago native and is extremely knowledgeable in history, philosophy, literature and much more. His extensive research is woven into the tapestry of this story. The city of Chicago in this historical perspective is a fascinating depiction, and appears almost as another character in the story. When Elliot Caprice’s Uncle Buster says, “I hate this city. She takes too much,” Elliot replies: “She ain’t so bad, after she kills you once or twice.” It’s a vivid depiction of this contentious city that these characters fight to survive in. Another aspect of the story that pulls the reader into the story is the colloquial language that is a unique linguistic flare of the era brought to life. It’s a compelling cast of characters, with varied motives and ethnic backgrounds.