But, a “pop,” a thump, as if someone had dropped a big garbage bin, woke us for a moment. We dozed off. Minutes later, work called; the assignment desk at KOMO-TV News, telling me to get here ASAP; St. Helens had exploded.

For weeks prior, we had reported on the mountain. Earthquakes had rumbled deep in St. Helens; it was growing an ugly “bulge” on the north slope; sometimes expanding 5 feet a day.

Then, on March 27, the volcano “burped”for the first time in 120 years, spewing ash and steam out of a small vent, spoiling the picture post card summit.

That afternoon, I helicoptered in with a photographer and a production assistant, and our pilot dropped us off on a lonely, snow-choked ridge about 10 miles from the summit.

We did the very first live broadcast from St. Helens during that early incident; then, waited anxiously for our pilot to return and pluck us out of there. Somewhere, as dusk came, a coyote howled, sending chills through us.

On May 19, I was assigned to get as close to the mountain as we could, which was miles away and report, live, on what was happening.

We would soon learn that 57 people had died. That the eruption had leveled 230 square miles of timber — that’s three times the size of the city of Seattle. And that the volcano rocketed an ash cloud 15 miles high that would eventually circle the earth.

That night, May 19, on a dark ridge, near St. Helens, our tiny TV showed the first video from KOMO photographer Dave Crockett, who was trapped on the flank of the mountain on the 18th; but kept his film camera rolling as waves of ash shut out the sun and nearly killed him as he struggled to escape what he called a “hell on earth.” He survived. 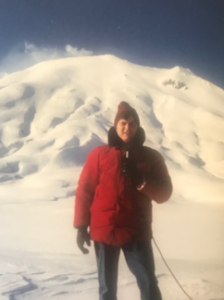 I was to report on the mountain many times during the next two years, recounting the heroes and the tragedies that reshaped our state and our lives when Mount St. Helens blew its top that morning of May 18, 1980.

On the 10th anniversary of the St. Helens eruption, KOMO-TV produced a remarkable documentary, Up From the Ashes, Mount St. Helens-1990.